Things to do in Krakow

Kraków boasts more historic monuments and art treasures than any other city in Poland. And all the great European architectural styles are in evidence in this beautiful city, from Romanesque and Gothic to Renaissance, Baroque and Art Nouveau. Here is our guide to things to do in Krakow. 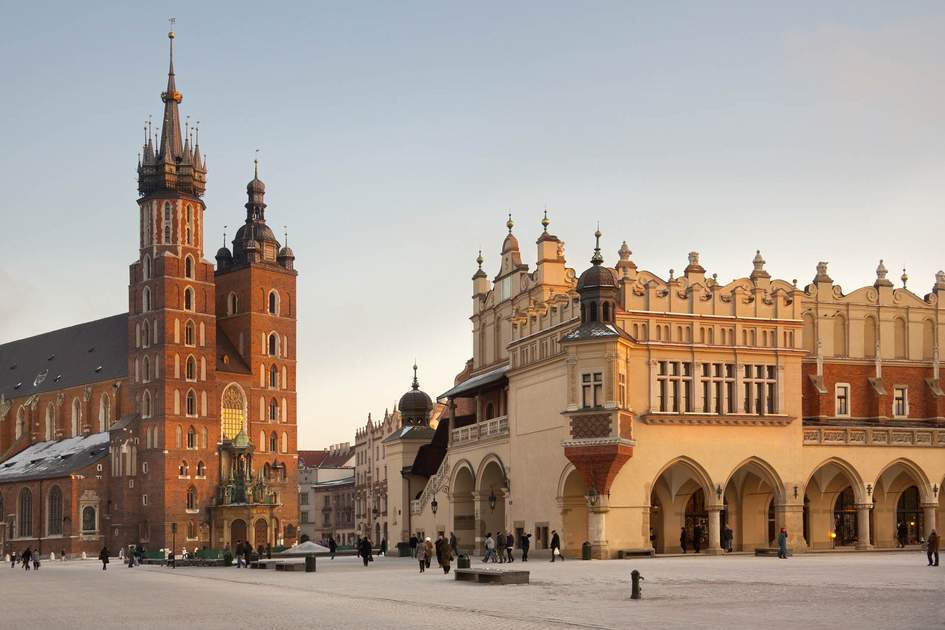 As Poland’s ancient former capital, Kraków was the residence of Polish royalty for 500 years. Locals still think of their city as Poland’s cultural and intellectual hub, while its large student population contributes to the city’s dynamism and buzzing nightlife scene, especially in the ancient Jewish quarter of Kazimierz. Spring is a great time to visit the city when it is frequently bathed in warm sunshine. Read on for our look at the best things to do in Kraków.

Start your visit of the city's Old Town in this sublime square in the heart of the city. A vast plaza, it is the largest medieval square in Europe and still Kraków’s social hub. The central Cloth Hall (Sukiennice) was formerly the meeting place of wealthy merchants from all over Europe, to trade in textiles, leather, salt, silk and spices. The trading hall has been rebuilt several times since but commerce is still alive in the colorful craft, amber and souvenir stalls, while the upper level is devoted to 19th-century Polish art.

The square is a social hub and a venue for festivals, concerts, street performers and parades. The surrounding cafés are great spots for people-watching. At night the action moves underground to stylish cellars housing bars, restaurants, jazz clubs, and nightspots. 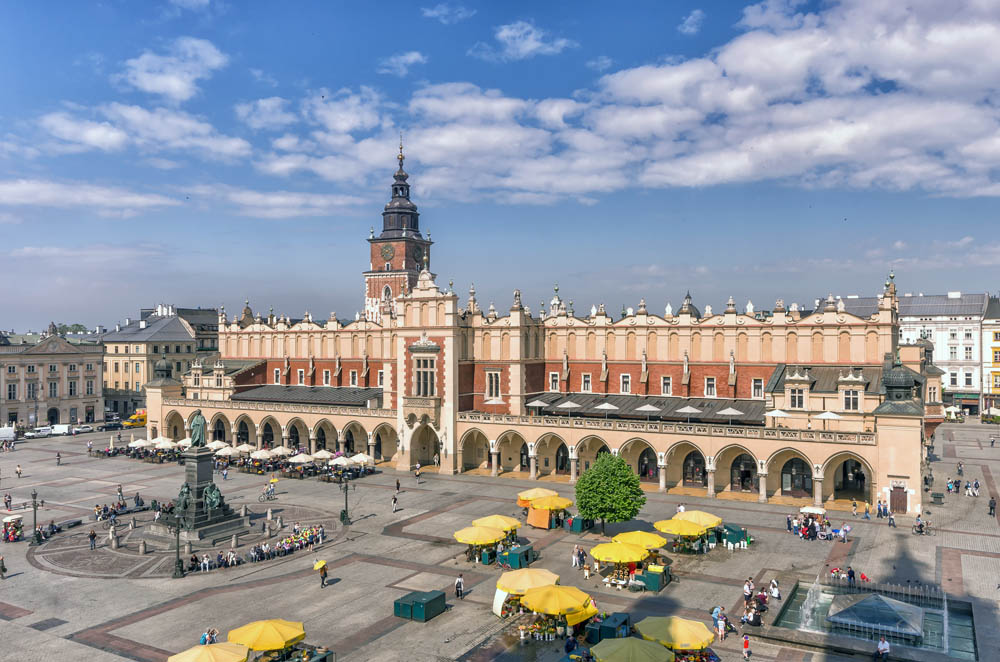 The unadorned Gothic facade of St Mary’s belies a sumptuous interior, with star-spangled vaulting, magnificent stained glass and a monumental 15th-century Gothic altarpiece carved in lime wood by the Nuremberg master carver Veit Stoss. Depicting scenes from the life of the Virgin Mary, the polyptych is made up of more than 200 carved figures, many based on contemporary Cracovians, portraying them warts and all. A visit to St Mary's to view the altarpiece is undoubtedly one of the best things to do in Krakow.

If you happen to be outside St Mary’s on the hour, look up to the highest of the two towers where a trumpeter will perform the hejinal, a bugle call played four times. The call breaks off in mid-stream commemorating the watchman who was killed by Tartar arrows as he sounded a trumpet warning of the invasion in 1241. Thanks to his warning, the sleeping Cracovians were aroused and the city was saved. The tradition of the hejinal from the tower, on the hour every hour, is centuries old. Today it is played daily by local firemen. 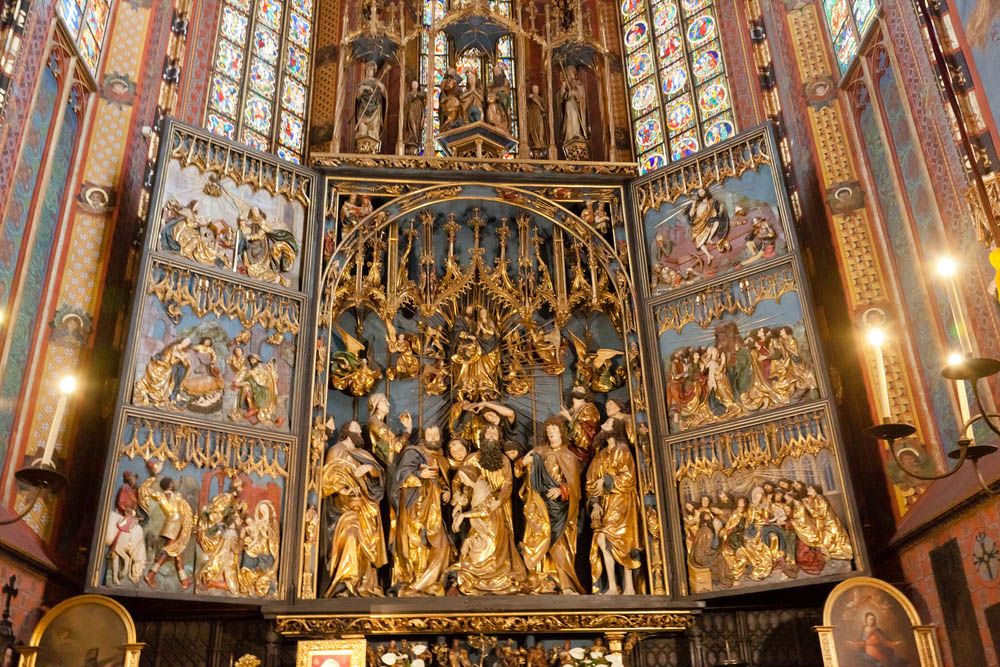 The popular high-tech Rynek Underground Museum opened in 2010 after five years of archaeological digs beneath the main market square. The museum lies 4 meters below ground level and explores 1,000 years of the city’s history with an emphasis on the link between medieval Kraków and contemporary European cities. Kraków was a member of the Hanseatic League (or Hansa), which dominated commercial activity from the Baltic to the North Sea from the 13th to 17th centuries. Through screens, holograms and models, the museum illustrates the life of the city's earliest settlers, medieval trading in salt, copper and lead, and Kraków as it was 600 years ago.

Archaeological finds on display include bones and skulls from the 11th-century cemetery, which was discovered under the market square. Be warned that visitor numbers are limited and at busy times of year it’s best to buy timed tickets in advance either online or at the information office.

Overlooking the town, from above the River Vistula, Wawel Hill is steeped in history. The political and cultural center of Poland, Wawel castle was the official residence of the Polish royal rulers until the capital moved to Warsaw in 1596. Each monarch left his mark, expanding the complex and adding to the treasures within. A beautifully proportioned, arcaded courtyard survives from the Renaissance palace, designed by Italian architects. Tours inside reveal the sumptuous State Rooms and Royal Private Apartments, hung with magnificent French and Flemish 16th century tapestries and fine artworks. The richly decorated interior also features numerous antiques, a Treasury and an an Armory Museum.

The nearby cathedral is a hotchpotch of styles, but what it lacks in architectural homogeneity is more than compensated for by its wealth of history. The most important church in Poland, it saw the coronation of almost every Polish king and queen, while its chapels and vaults house the tombs of monarchs, statesmen, national heroes, poets and Church dignitaries. Pride of place goes to the grandiose tomb of the 11th-century Bishop of Kraków, St Stanislaw, to whom the church is dedicated. Another famous Bishop of Kraków was Karol Wojtyla, who became Pope John Paul II and presided here for ten years. The most recent burial was that of the late President Lech Kaczynski and his wife following the tragic plane crash in 2010 which killed many of Poland’s political and military elite. In summer, a challenging climb up a series of staircases is rewarded by fine vistas and a close-up view of the Sigismund Bell. This weighs nearly 13 tonnes, requires 12 bellringers and can be heard from 50km away – or so they say. 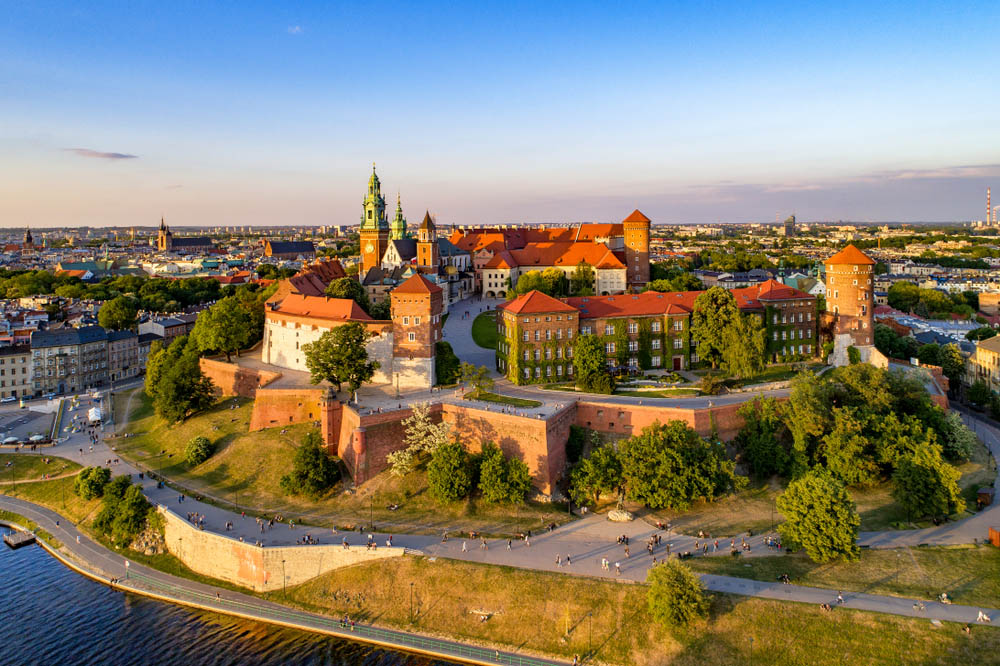 5. Lady with an Ermine

Don’t miss Leonardo da Vinci’s exquisite painting, Lady with an Ermine. It is one of only four female portraits by the artist and depicts the mistress of Ludovico Sforza, Duke of Milan. The portrait arrived in Poland in 1800 when Prince Adam Czartoryski decided to incorporate it into the family collection. The elusive and well-traveled lady was hidden from the Russian army in 1830, then sent to Dresden and Paris, returning to Kraków in 1882. The Nazis seized her in 1939 and sent her to Berlin but she was reinstated to Kraków in 1946. She now hangs in her official home in the city's lavish Czartoryski Museum.

Don’t be deterred by its austere 1930s facade – the National Museum in Kraków is a rich repository of Polish art. There is a gallery of Applied Arts from the Middle Ages to the 20th century, a revamped Arms and Uniform Collection, and more than 400 works of Polish art and sculpture from the 20th century.

Among the highlights are stained glass designs by Stanislaw Wyspianski, a leading member of the Mloda Polska (Young Poland) movement, an offshoot of Art Nouveau. Wyspianski fans should not miss the Szolayski House, a branch of the National Museum (and previously known as the Wyspianski Museum, just off the market square) that focuses on the Mloda Polska movement and showcases many more works by Wyspianski.

Created by King Kazimierz the Great in 1335, the ancient Jewish quarter in Kraków was for five centuries a city in its own right. By the 17th century it was a flourishing town with several synagogues (as well as Roman Catholic churches) and a rich cultural life. When Germany invaded Poland in 1939, 70,000 Jews lived here, but only around 3,000 survived the Holocaust. Today only around 150 Jewish people are registered as living here. Despite the tiny surviving Jewish population, the quarter is still home to renovated synagogues, Jewish-themed restaurants and museums. The Old Synagogue now houses the Galicia Jewish Museum, ‘in memory of Polish Jews’, and the former town hall is the Ethnographic Museum.

In fascinating contrast to the splendor of the Old Town, Kazimierz is in parts unkempt and edgy. The central square, Plac Nowy, with its market stalls selling selling zapiekanki (Polish-style pizzas) and a flea market at weekends, couldn’t be more different from formal Rynek Glówny. However, the quarter is the city’s liveliest district, buzzing with atmospheric little bars, music venues, jazz clubs and small galleries. If you are in the city in late June, don’t miss the Jewish Culture Festival (26 June–5 July, 2020), which is the biggest celebration of Jewish culture in Europe. 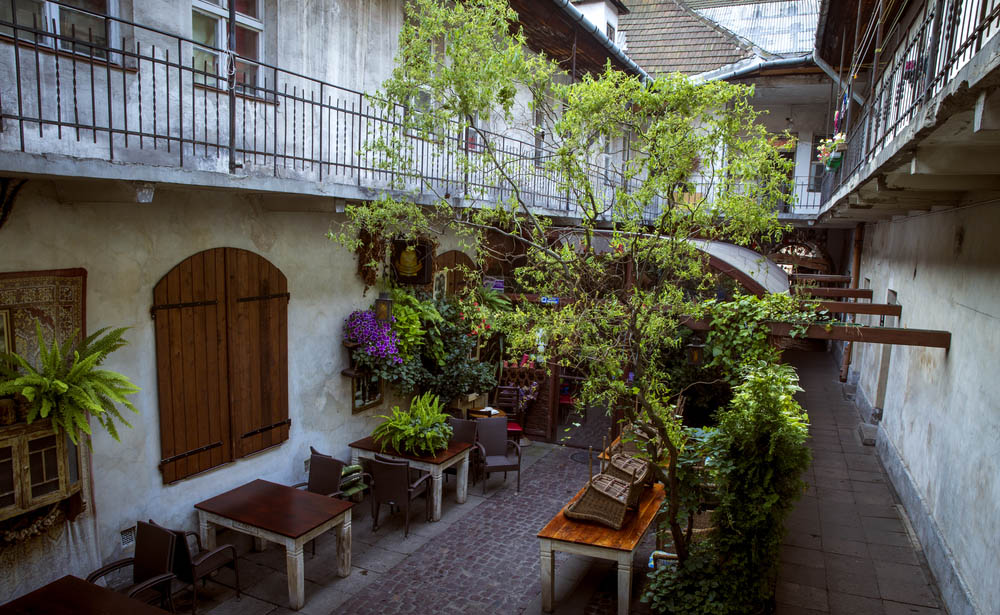 Jewish Quarter of the Kazimierz district in Kraków. Photo: mokolajn/Shutterstock

Across the river from Kazimierz, industrial Podgórze became Kraków’s Nazi-created Jewish ghetto. The renovated administrative building of the enamelware factory of Oskar Schindler, portrayed in Steven Spielberg’s film Schindler’s List (1993), opened in 2010 as the Schindler’s Factory history museum. It not only tells the tale of the heroic Schindler who employed Jewish workers and ensured the survival of 1,000 lives, but presents the bigger picture of Kraków during the Nazi occupation of the city from 1939–1945. Through multimedia installations, wartime videos, photos, official documents and interviews, you are taken from the last days of freedom, through the invasion of Poland, to life under the Nazis and the fate of the Jews. It is a modern, very moving museum, particularly the final Room of Choices. 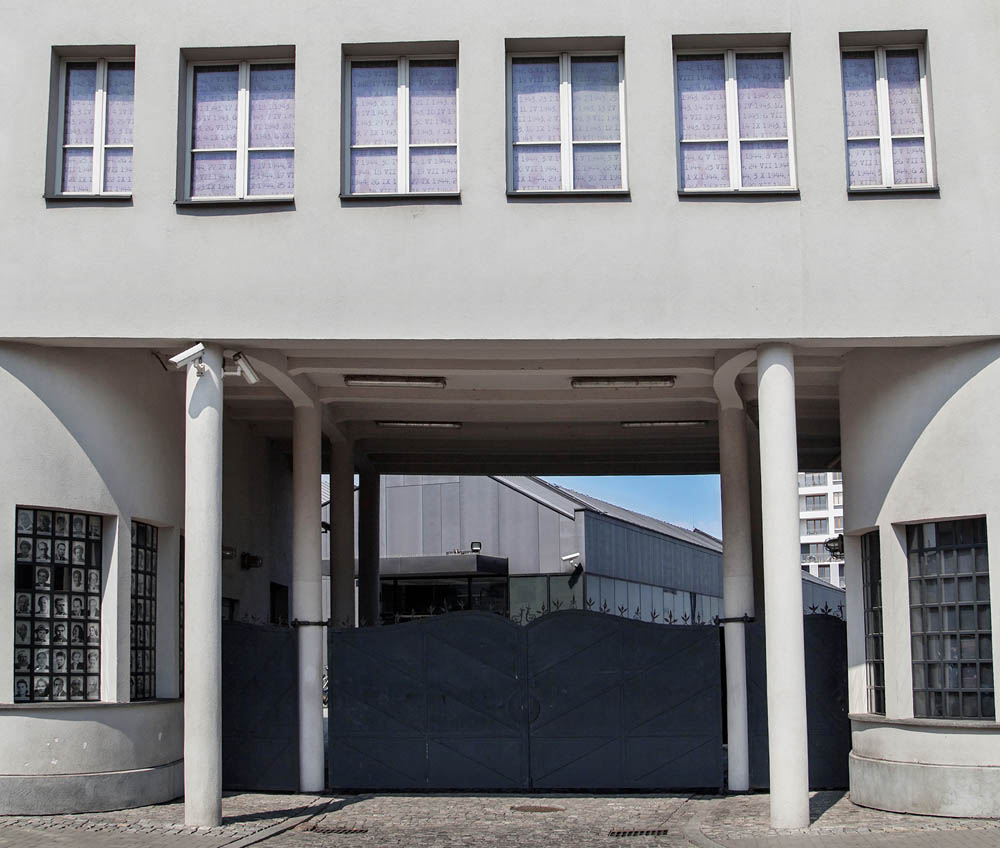 Schindler’s Factory is not the only museum to sprout in industrial Podgórze. Tucked away behind it, in the same formerly derelict factory, is the new Museum of Contemporary Art in Krakow, or Mocak, which opened in May 2011. Within a concrete and glass building designed by Italian architect Claudio Nardi, the state-of-the-art galleries house a permanent collection of avant-garde works by both Polish and international artists.

It’s just a short ride on bus or train to the Unesco-listed Wieliczka Salt Mine, 10km (6 miles) southeast of Kraków. Salt was a huge source of wealth in the middle ages and in the late 14th century, salt-works provided 30% of the total income of the Crown. The famous mine at Wieliczka, which operated for 700 years, receives 1.2 million tourists annually and over the centuries has attracted royalty, statesmen, popes and literati. Copernicus, the great Polish astronomer, came here in 1443.

The salt-works are on nine levels, reaching as far down as 327 meters. Visitors can descend as far as level 3, and are whisked down underground in ancient rickety lifts (this trip is not for the claustrophobic). The lengthy guided tours take you along two miles of passageways (just a fraction of the 155-mile, 245km total), via chambers with statues and monuments carved in salt, mock-ups of mining techniques, saline lakes, and underground churches. Virtually everything is created from rock salt. The highlight is the grand 17th-century Chapel of St Kinga, complete with crystal salt chandeliers and salt sculptures, including some impressive bas-reliefs of New Testament scenes sculpted by the miners. The latest addition is the Miners’ Route where visitors don mining gear, and experience the life of a miner, hacking away at rock salt and crawling into chambers. Note that the Tourist Route takes two hours and the optional Underground Museum is an extra hour. 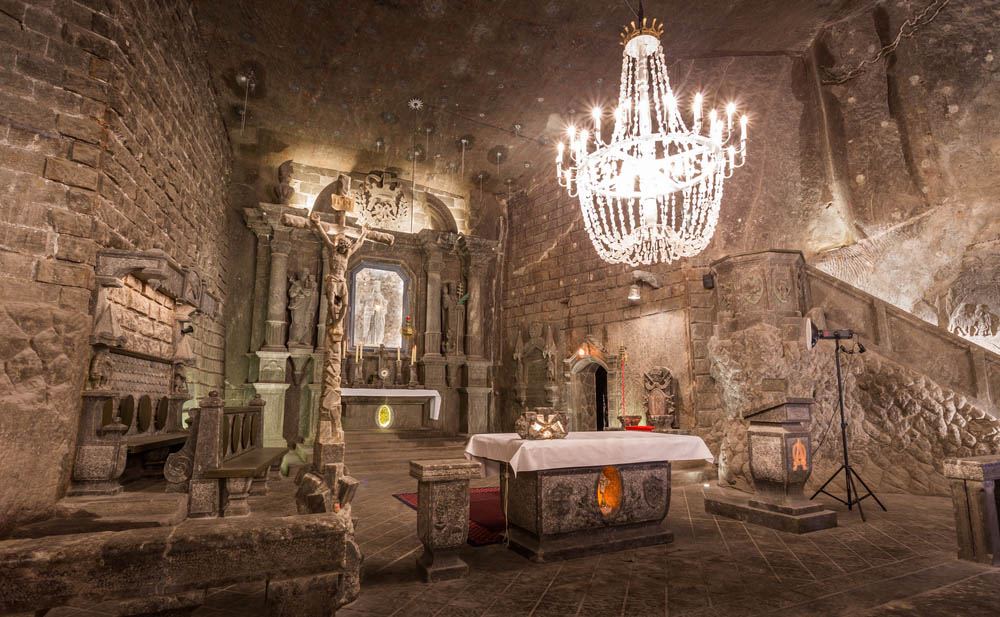 Ready to take a trip to Kraków?

Insight Guides can help organize and book fantastic trips in Poland for you. Simply get in touch with us to share your ideas for the trip and to let us know exactly where and when you would like to travel. Local experts will then create a personalized itinerary especially, which you can amend until you are happy with every detail before booking.

We planned to come to Poland for the weekend, but were persuaded to visit the National Park in Białowieża while planning our trip. We spent a couple of wonderful days in this truly magical and unprecedented place. We are very grateful for the professional... Read more

We planned to come to Poland for the weekend, but were persuaded to visit the National Park in Białowieża while planning our trip. We spent a couple of wonderful days in this truly magical and unprecedented place. We are very grateful for the professional service. Both the guide and driver offered us professional service and care. We felt that these people love what they do!