Traveling the Nativity: from Nazareth to Egypt 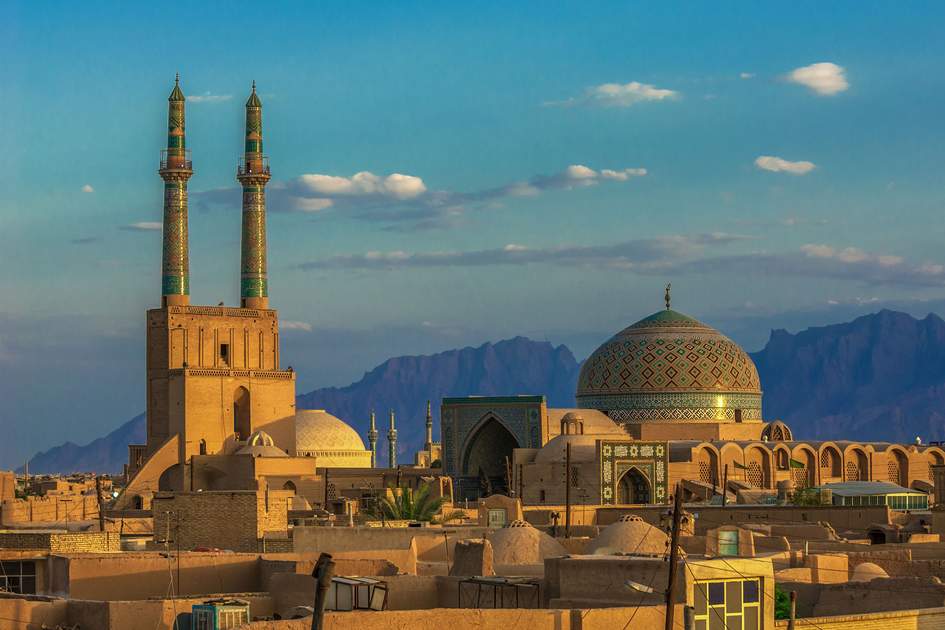 In the run-up to Christmas, we’ve decided to take a festive approach to travel and use the Nativity story as our starting point to plan a trip. After all, the story does hold considerable relevance for travelers – who among us hasn’t arrived in an unfamiliar town, late at night, without having booked anywhere to stay? That sinking feeling as we trudge from hotel to hotel, searching for an available room, is perhaps the most instantly relatable part of the Christmas story. But before we find ourselves bedding down in a stable, let’s take a look at the places mentioned by the Gospels of Luke and Matthew…

Let’s start with some scene-setting in Rome, where the Roman emperor Caesar Augustus was keen to institute taxation reforms, for which he first needed to undertake a census. Augustus was the first emperor of Rome, and he dramatically altered the city with grandiose building projects. Many of Augustus’ commissions have been lost to time, but the scale of his ambition can be seen at his Mausoleum, which is due to reopen to the public in the near future.

Despite his claim to have inherited Rome as “a city of bricks and left it one of marble”, it’s entirely possible that Augustus’ decision to order a population census for taxation purposes became his most historically significant legacy. 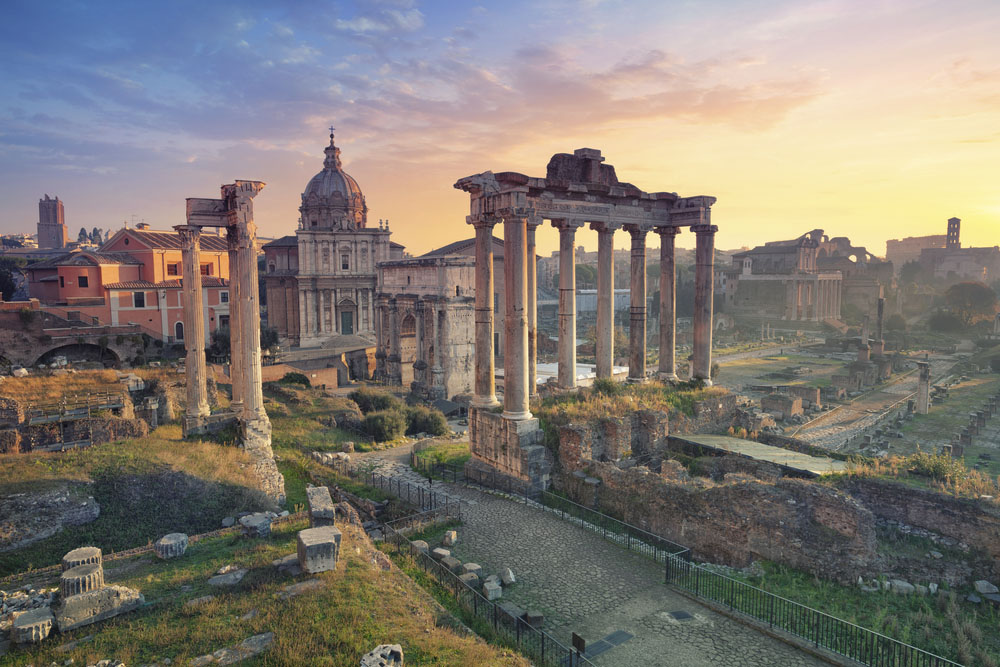 Out in the provinces of Augustus’ empire was Nazareth, which in biblical times was most likely a small village, home to Mary and Joseph. According to Luke’s Gospel, it was here that Mary was visited by the angel Gabriel and informed that she would have a child, who would be the son of God. It’s also thought that, following the dramatic events around his birth, Jesus spent his childhood here.

Today, Nazareth is one of the biggest cities in Israel, and a major center for Christian pilgrimages – the Basilica of the Annunciation, one of the largest churches in the Middle East, sits on the spot where tradition holds that Gabriel visited Mary. The city is home to many other churches, all sited on biblically important positions, and it’s also worth simply wandering the narrow streets of the pristine old town. Once you’ve finished exploring, head to one of the city’s many restaurants to sample the excellent fusion cuisine for which Nazareth is becoming famous: dishes take inspiration from Moroccan, Lebanese and Italian fare as well as local Arabic flavors. 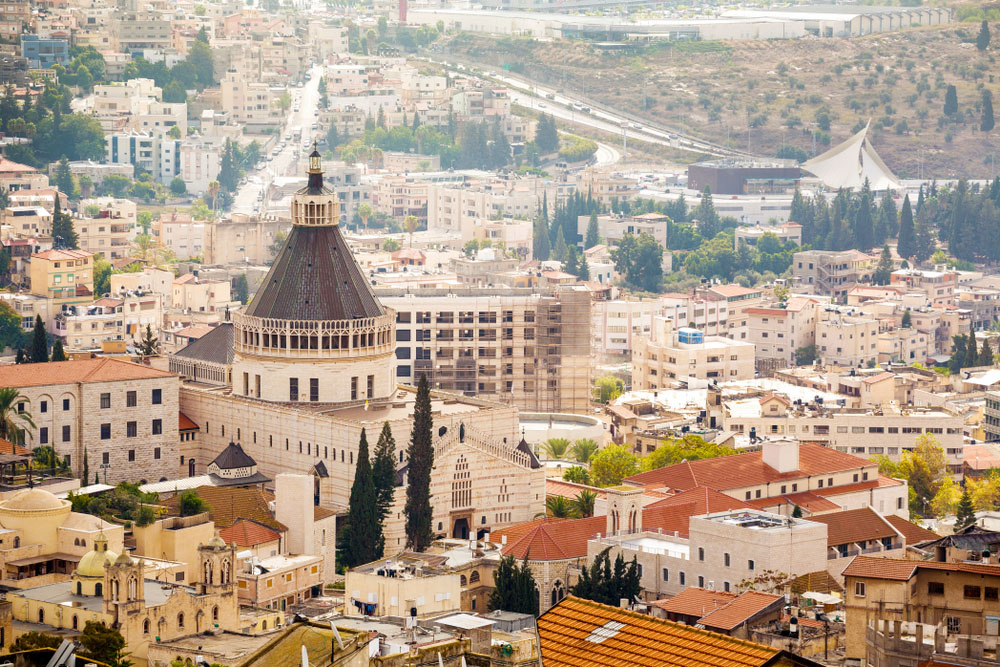 Joseph, as a descendant of the House of David, was required to travel to the city of Bethlehem to be included in Augustus’ census. He and the now heavily pregnant Mary made the journey of 160 kilometers, only to find on arrival that there was nowhere available for them to stay. Tradition has it that they found accommodation in a stable, and Jesus was there born and laid in a manger.

Like Nazareth, Bethlehem is still a hugely important pilgrimage site, especially the Church of the Nativity, built on the site of the birth. Thought to be one of the oldest churches in the world, the current structure dates from the mid-6th century, though it has been modified several times over the years. Elsewhere in town, you’ll find a number of other historically and biblically significant sites, as well as a fair number of artworks by the elusive artist Banksy. 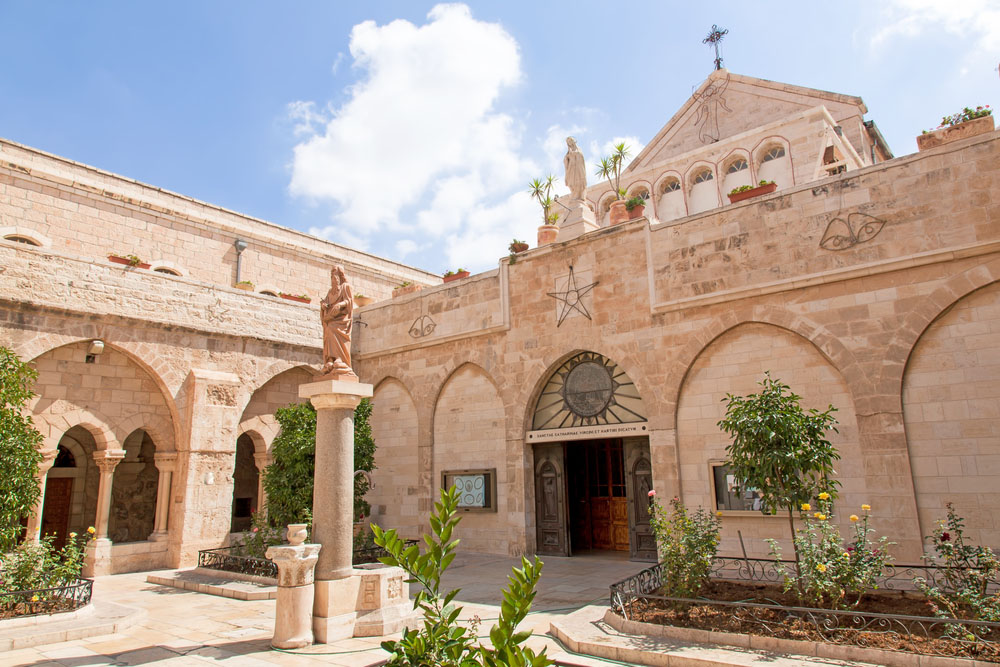 Shepherds from the surrounding hills visited the infant Jesus in the manger, and the newborn child also received visitors from the other end of the social spectrum: the Magi, or Three Wise Men, who travelled from far in the east, to pay their respects. It’s thought that the Magi were practitioners of Zoroastrianism, an ancient religion that emphasizes the importance of an ethical approach to life, and assigning high ritual significance to water and fire.

We don’t know exactly where the Magi who visited Jesus came from, but the story goes that they traveled a considerable distance to reach him. Yazd, a city in the heart of Iran, is today one of the major surviving centers of Zoroastrianism, so it seems appropriate for our Nativity tour to take a trip here. At the Zoroastrian Temple, you’ll see the sacred fire that is thought to have been kept burning for more than 1500 years, while on the outskirts of town, the Towers of Silence that rise on two small hills were formerly used for exposing dead bodies to the elements, thus preventing them from corrupting the sacred earth.

While in Yazd, it’s also worth checking out the exquisitely decorated Jameh Mosque and the majestic Amir Chakhmaq Complex – and don’t forget to try some of the local pastries! Yazd is famous for catering for those with a sweet tooth: the Yazdi cake, made with cardamom and rosewater, is particularly tasty. 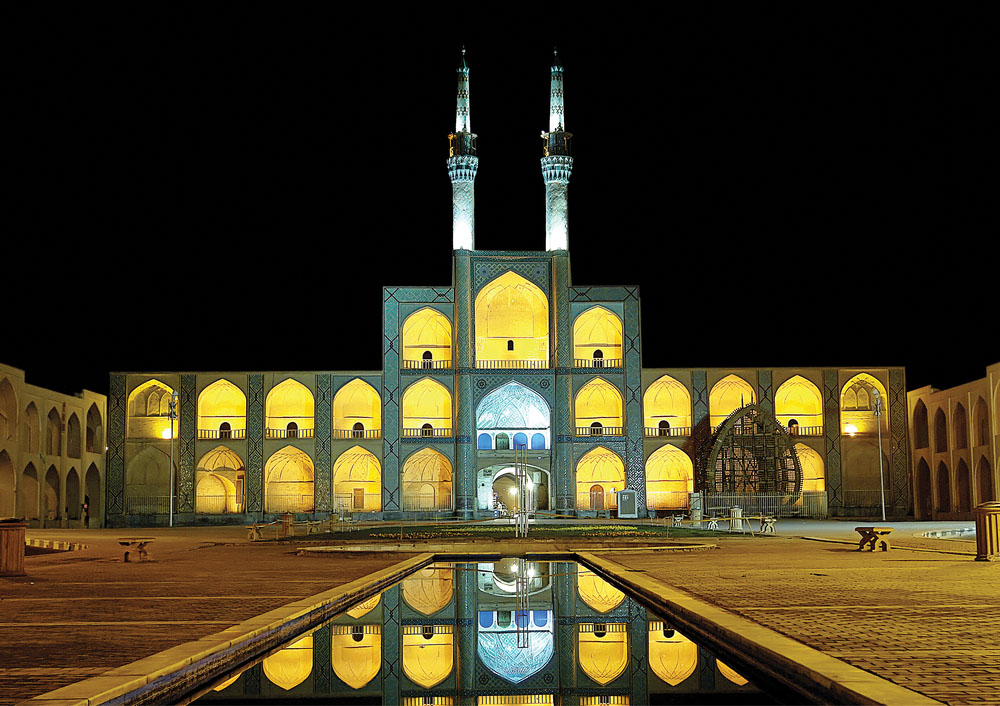 And now it’s time for the sinister part of the story… on their way to visit Jesus, the Magi passed through Jerusalem, where Herod was king. Fearing a rival, Herod wasn’t pleased to hear of the birth of a child thought to be the Son of God, but concealed his thoughts and asked the Magi to come back and inform him once they had found Jesus. Fortunately, the Magi were warned of Herod’s intentions by an angel, and they returned home without returning to Jerusalem.

Herod is a generally reviled historical figure – though his reign was generally successful, he’s thought to have been a paranoid tyrant, who impoverished his people through grandiose building projects. Plenty of his projects have survived to the modern day, and his architectural legacy can be seen at Jerusalem’s Temple Mount – including the famous Wailing Wall – and in numerous other sites across the city.

Those seeking further examples of Herod’s building projects might visit the ruins of his palace at the site of Herodium just outside Bethlehem, or the remains of his major port city, Caesarea Maritima. The famous fortress of Masada is also thought to have been at least partly Herod’s work. 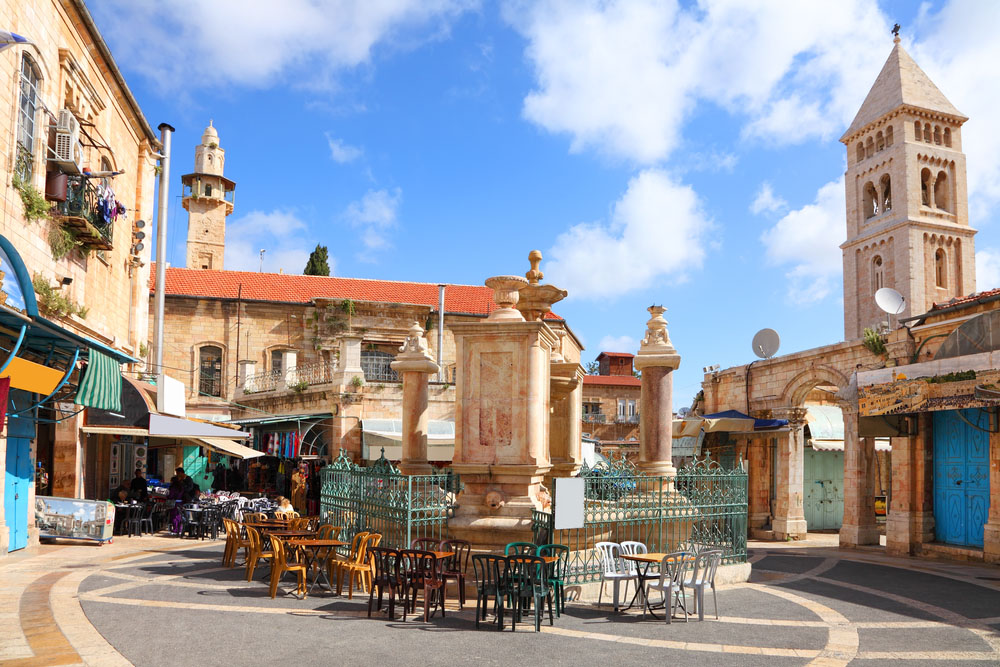 The Gospel of Matthew reports that Herod, not getting any news of Jesus from the Magi, took things a step further and ordered that all male children aged two or younger be killed – an act of uncertain historical accuracy now known as the Massacre of the Innocents. Fortunately for Jesus, an angel warned his father Joseph in a dream and advised the family to flee to Egypt and only return after Herod’s death.

So the final stop on our Nativity tour is Cairo – more specifically, the Abu Serga Church, which is thought to be built on the spot where the family rested after their arrival in Egypt. The church dates back to the 4th century and is hugely important to the Coptic Christian tradition, being the site of the election of many Coptic patriarchs. It’s found in a part of town known as Coptic Cairo, an area home to many other significant churches and the Roman-era red and white-striped Babylon Fortress.

While in town, you might want to check out the Pyramids of Giza – it would be something of a shame to miss one of the Seven Wonders of the World, after all. Cairo is also home to innumerable mosques, bazaars and museums, with the new Grand Egyptian Museum due to open in 2021. 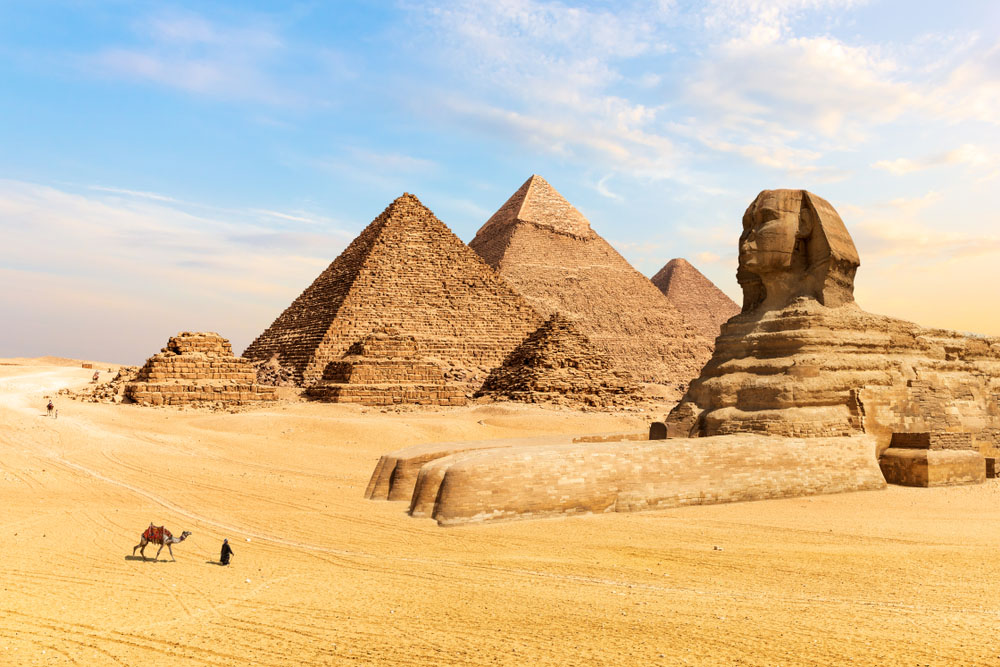 The Pyramids of Giza and the Great Sphinx, Egypt. Photo: AlexAnton/Shutterstock