Unexpected places to find Roman ruins around the world

We are used to exploring Roman ruins in Italy and Greece, but what about Ibiza, England and Bulgaria? Here are 7 unexpected places to find Roman ruins around the world. 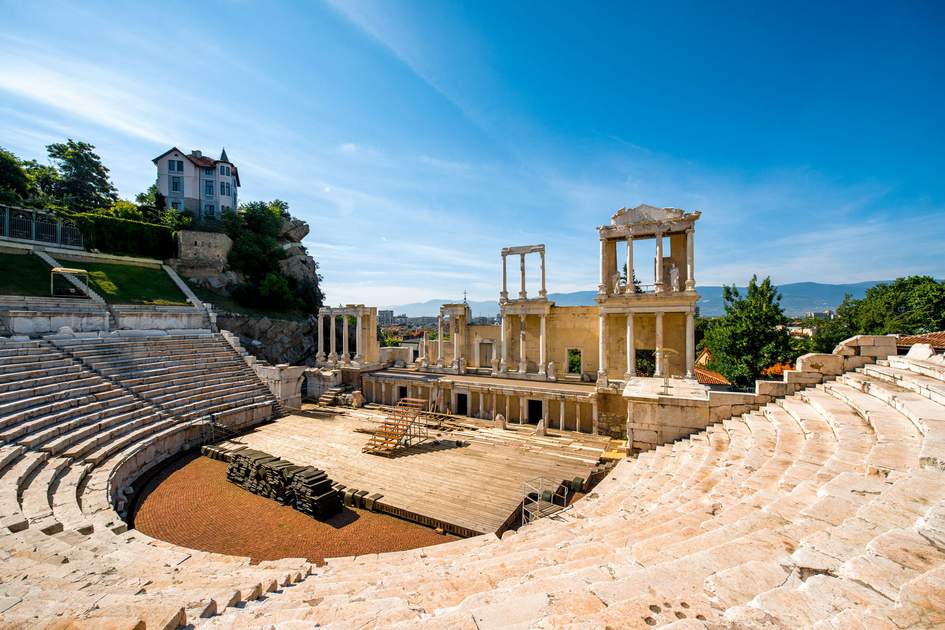 The Roman Empire reached far and wide. While it’s a given that Italy and Greece are rich in ancient remnants – amphitheatres, forums, triumphal arches – there are ruins in much less-likely areas that have also stood the test of time. From Ibiza to Lebanon and West Sussex to Plovdiv, read on to discover the most unexpected places to find Roman ruins around the world.

Volubilis (near Meknes) was a Roman provincial capital and nothing short of remarkable. Morocco was one of the most remote outposts of the Roman Empire, and served as a marker of just how far the Romans had conquered; Latin was spoken here long after the Romans left. The complex of Volubilis features remnants of buildings dating from 2–3AD: the House of Orpheus is named after the excavated mosaic that tells the story of the tragic Orpheus myth, while the Gordian Palace boasts a huge bathhouse. Rich merchants would have enjoyed the Baths of Gallienus and bustled about the Basilica, while the Temple of Saturn was simply awe-inspiring, and still is in its ruined form. 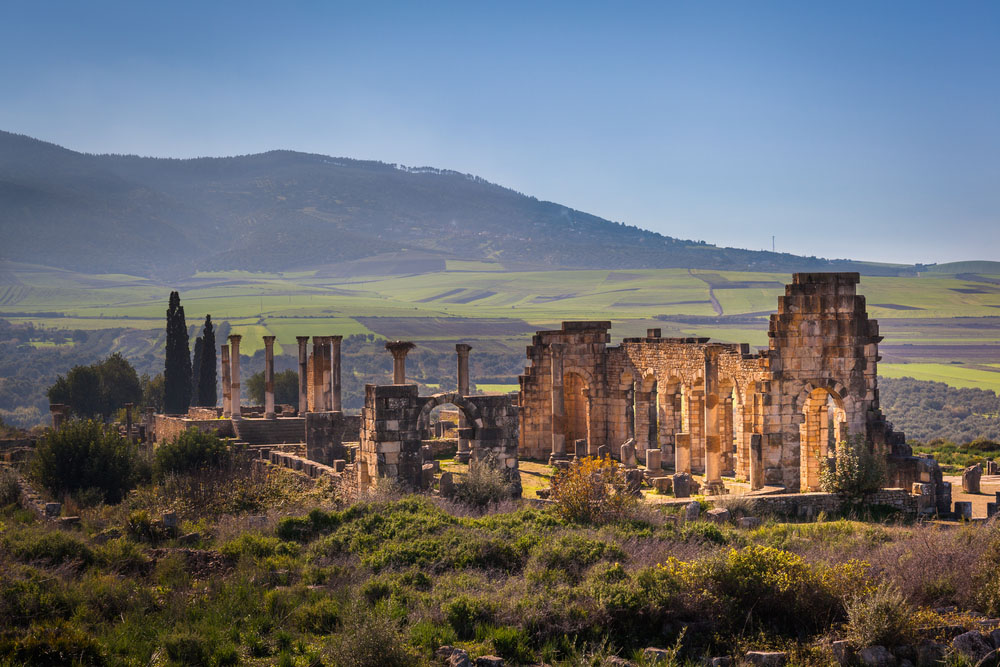 We know that England saw Roman invasion in 43AD – the otherwise-forgettable Emperor Claudius succeeding where Julius Caesar had failed – and with that came Chester with its amphitheatre and Bath with its, well, baths. West Sussex’s Fishbourne Roman Palace features some of the country’s best-preserved mosaics, an impressive hypocaust (under-floor heating system) and formal gardens laid out to their original plan. The Palace wasn’t far from where the British Atrebates tribe were based (in modern-day Chichester), and the owner of the palace, Cogidubunus, was a native Briton granted Roman citizenship. The palace shows just how interlinked Roman and British cultures were. 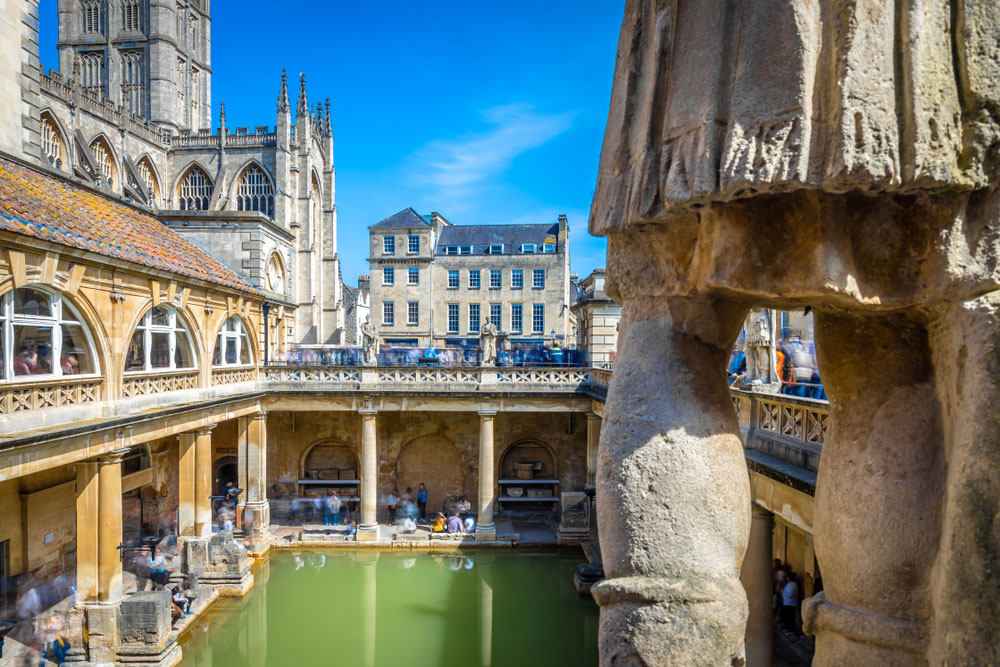 Built on top of an earlier Hellenistic temple, Baalbek’s Roman temple complex was once renowned as among the grandest in the Roman world. Lebanon became a Roman province in 64AD and Baalbek – then called Heliopolis – highlighted the sheer wealth and power of the Empire. The site was home to four important temples; the largest, the Temple of Jupiter, dominated the landscape with its tall columns, cedar-wood ceiling and terrifying stone gargoyles. Archeologists are still puzzled by how the ginormous slabs of stone were lifted into place on its uphill position. There’s also the Temple of Venus, with its circular shrine and dove sculptures; the Temple of Bacchus with its intricate design and bull carvings; and the Temple of Mercury, which lies a little further afield. 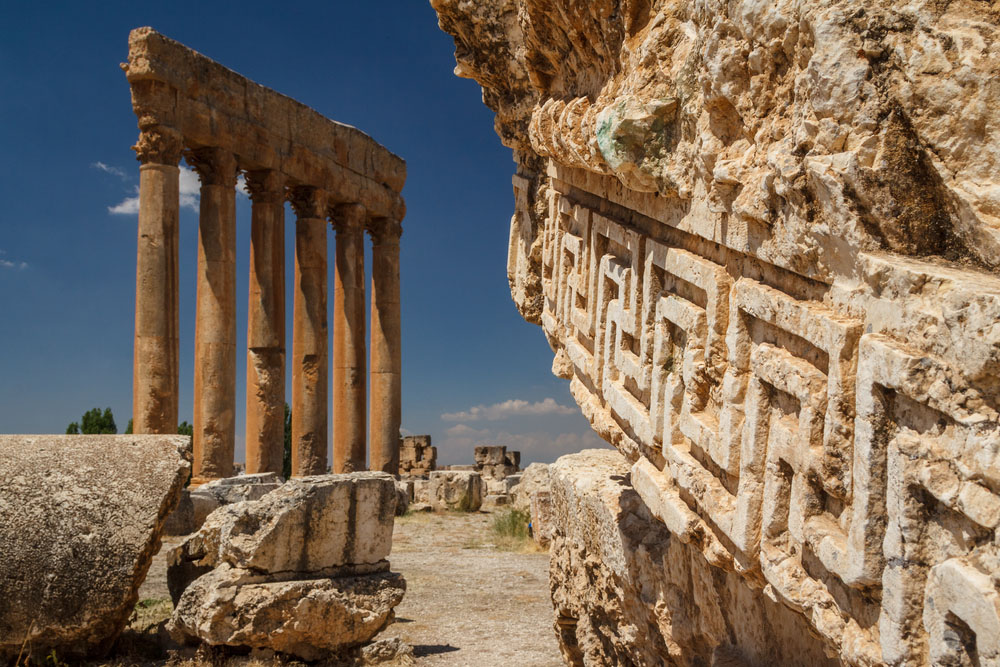 Ibiza is the sort of island that the Roman god of wine and festivities, Bacchus, probably would have enjoyed. Yet despite its party-paradise label, remnants of ancient Rome are sprinkled all over the island. Coves such as Es Calo de Sant Agusti have served as fishing ports since Roman times, while Ibiza Town’s Archaeology Museum displays ancient amphorae discovered from local shores and shipwrecks. 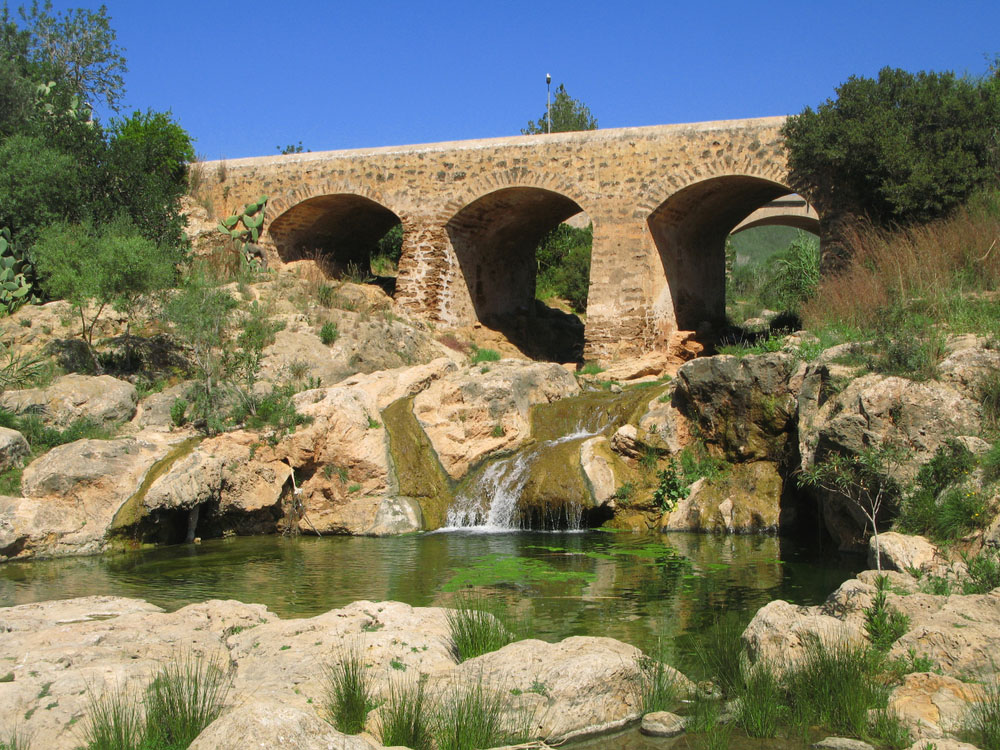 You might not think that Roman Africa stretched much beyond Egypt, but you’d be surprised. In neighbouring Libya, the coastal spot of Leptis Magna is lesser known but seriously impressive. Not only was the Roman Emperor Septimius Severus born here, but he saw the construction of the Basilica (one of the largest in the Roman Empire) with a 20 metre-high triumphal arch in all its Corinthian-columned glory. There’s also a half-Greek, half-Roman amphitheatre, and the once-bustling Forum is today strewn with tumbled columns. It was a popular residential area, with Roman baths that look out to sea and an excavated oven suggesting that there was at least one bakery that served the locals here. 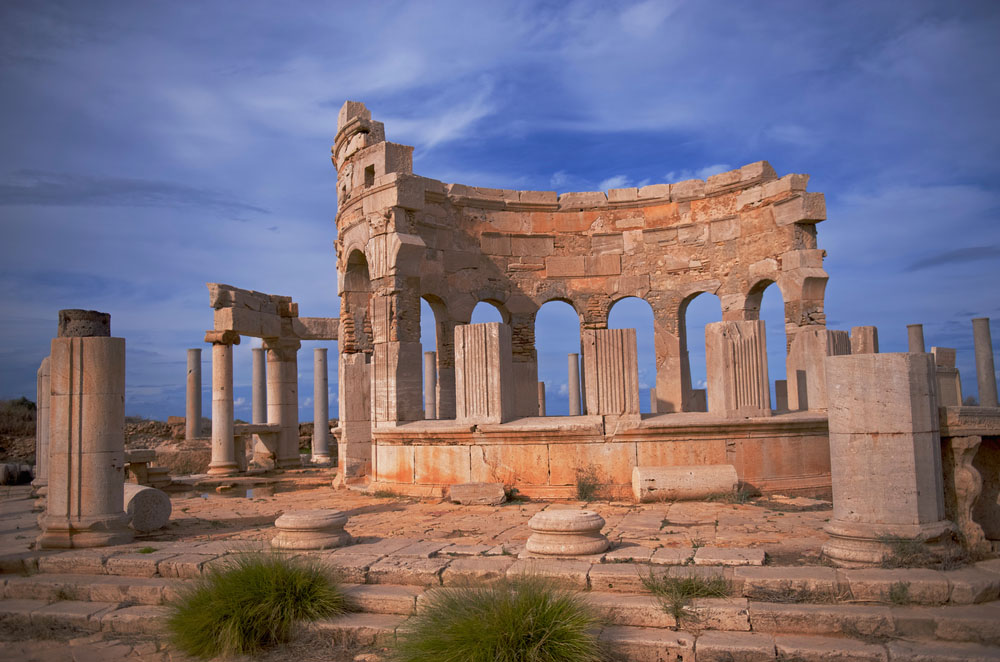 The marketplace at the spectacular ruins of Leptis Magna near Al Khums, Libya. Photo: BigRoloImages/Shutterstock

Halfway between Porto and Lisbon lies Conímbriga, Portugal’s most significant Roman site. The town flourished until 4AD, with excavations revealing paved Roman roads and swanky, multi-roomed houses. Portugal was another outpost where the Romans could boast how far they’d come; with solid defensive walls, rooms featuring mosaic panels and a central Forum, you can understand why they wanted to show off their westernmost spoil. Intricate artefacts from Conimbriga can be found on display at the Museu Monográfico de Conímbriga, which include the likes of hairpins, jewellery, gargoyles and tombstones. 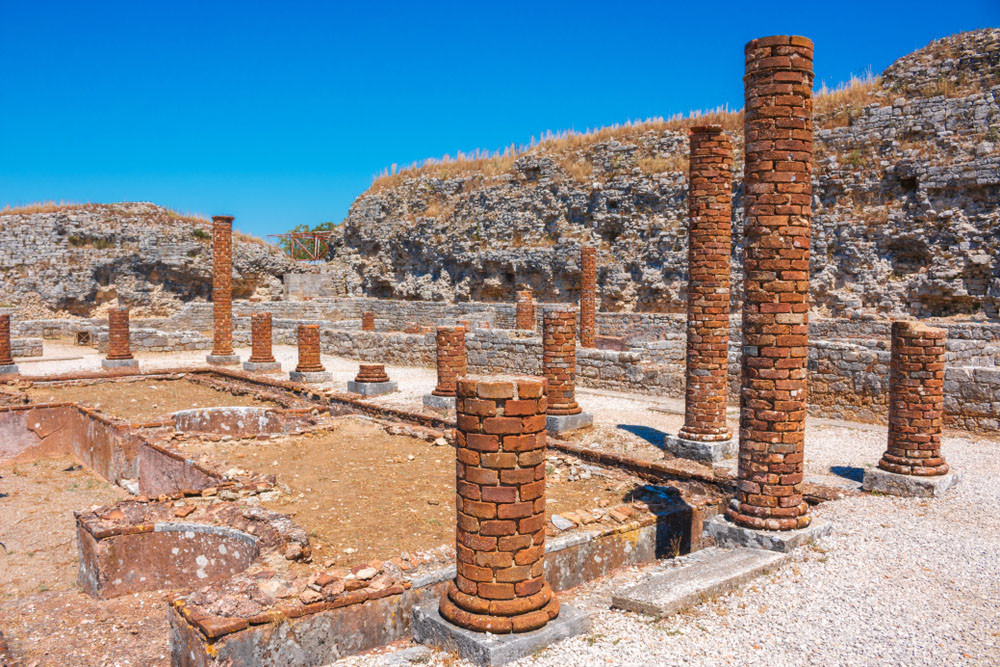 Built in 2AD during the reign of likeable Emperor Trajan, Plovdiv’s Roman Amphitheatre, or the Ancient Theatre of Philippopolis, is the best-preserved Roman ruin in Bulgaria. Given Plovdiv’s laid-back charm, it’s not necessarily the place you’d expect to find a whopping great Roman amphitheatre. The theatre could seat up to 6000 on its marble benches (there was a separate lodge for the Emperor) and was where theatrical performances, gladiatorial games and General Assemblies were held. Behind the crumbling remnants of the tall, multi-levelled colonnades sweeps a mountainous landscape, which gives an idea of the theatre’s sheer size and significant setting. 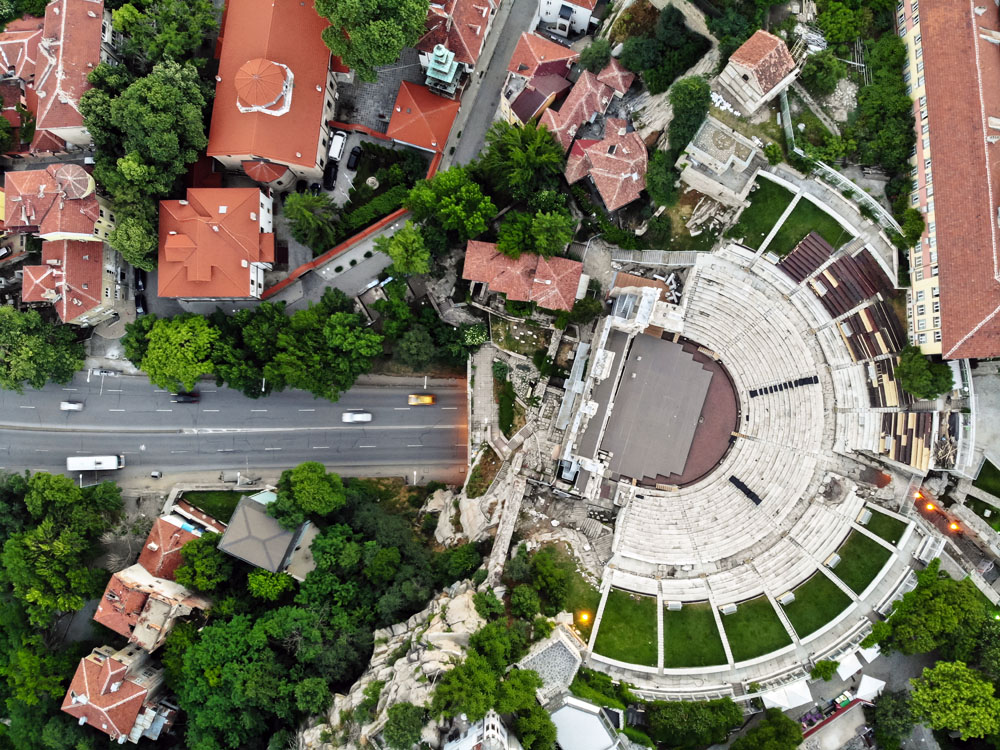