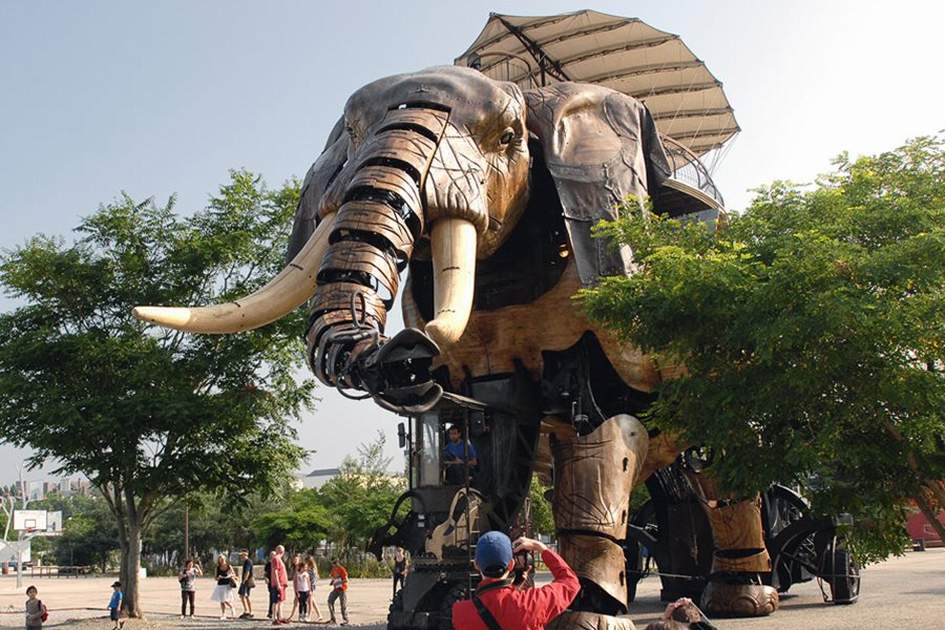 Our cartographer James tells of a magical encounter with a family-friendly menagerie of hand-constructed animals in the French city of Nantes.

In the summer of 2006 I stumbled upon an elephant striding down London's Piccadilly, a spacecraft in Horse Guards Parade, and a giant little girl in a 10ft deckchair in St James' Park. This was actually part of a theatrical project called the "Sultan's Elephant" staged by the French street theatre company Royal de Luxe.

Over the days that followed the characters that passed through the streets of London were surrounded by increasingly large crowds awestruck by the spectacle. It made such an impact that a few months later I corralled my family together and we crossed over to Calais to see the whole thing again.

Seven years on we set sail again, this time for the elephant's home city of Nantes in mid-western France.

In the centre of Nantes a former shipyard on an island in the middle of the Loire river has become the home of a unique world of mechanical animals, gradually growing in number and variety, and all filled with the spirit of the city's most famous son, Jules Verne. Surrounded by colossal abandoned cranes and industrial concrete structures there could be fewer fitting places for the home of a project that so beautifully fuses natural history, mechanics, puppetry and storytelling.

One of the best aspects of the whole experience of Les Machines de l'île is the complete freedom to explore – you are welcomed into the world rather than just watching it from behind a barrier. You can touch the creations, stride alongside them and, in the case of the elephant that brought me here, ride within them. 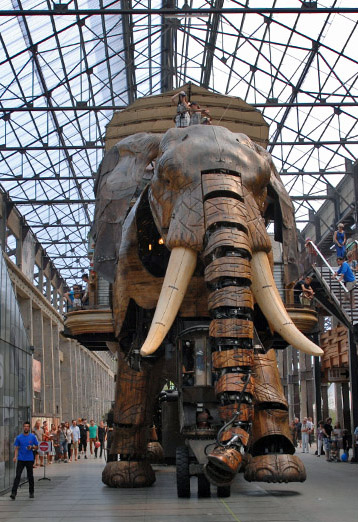 This giant creation has become something of an unofficial icon of Nantes, making its way around the island
throughout the day, trumpeting and spraying water as it goes, and gathering crowds that follow behind in its huge footsteps.

The four-story-high elephant allows up to 40 people to ride within its wooden body and climb upon its decked back beneath a beautiful white-sun carousel. Up close it's a staggering sight, the care and craft that has gone into each tiny hand-carved detail is stunning.

As you ascend the stairs you can glimpse the pneumatic switches frantically clattering away across a network of tubes and cables – the heart of the elephant. This just adds to its organic feel, and even the cry of the beast is a handcrafted masterpiece, involving dials, pipes, rubber tubing, horns and a delicate touch from the operator.

The journey within the elephant is just long enough to allow you get a feel of the animal, an exploration of the mechanics and a panoramic view across the city.

After descending from the elephant you can climb to the top floor of a warehouse to view the craftsmen in their workshop – it's fantastic to see the plans, tools and care that goes into each animal. You exit from the workshop galleries via an enormous metal tree branch, all covered in plants and foliage – a mini maze that gradually takes you down to the ground.

Back within the huge hanger like space at the centre of the site you enter the Galleries des Machines. Here, within a tropical garden you find more animals waiting to be brought to life – ants, caterpillars, fish and an enormous heron who when awoken soars above everyone's heads with two lucky visitors sitting in wicker baskets beneath her wings.

It is in these galleries that you can see future plans for the site, including the enormous Arbre aux Hérons (Heron Tree) that will reach 35 metres into the sky and will be inhabited by the rideable creatures you can already see around you. It's an ambitious and bewilderingly huge project that they hope to complete by late 2017. 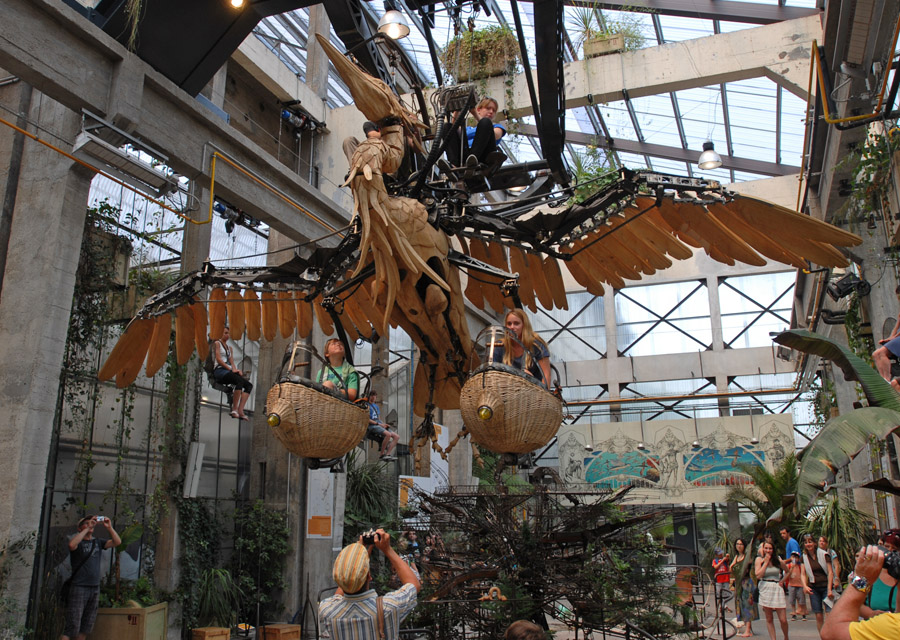 Back outside sits a small fairground-style carousel dedicated to the under 12s. Devoid of the usual horses and teacups, the range of fauna is enchanting. My three and nine year-old daughters were suspended beneath a pufferfish pedalling away on a pair of propellers, all watched by a wooden man who gazes upward with a ferocious intensity.

You can't escape the feeling of unease as well as of joy – it's creepy and crazy, but it's also fascinating and enchanting, especially with the perfectly matched music from the carousel drifting in the breeze with a chiming, spooky echo. 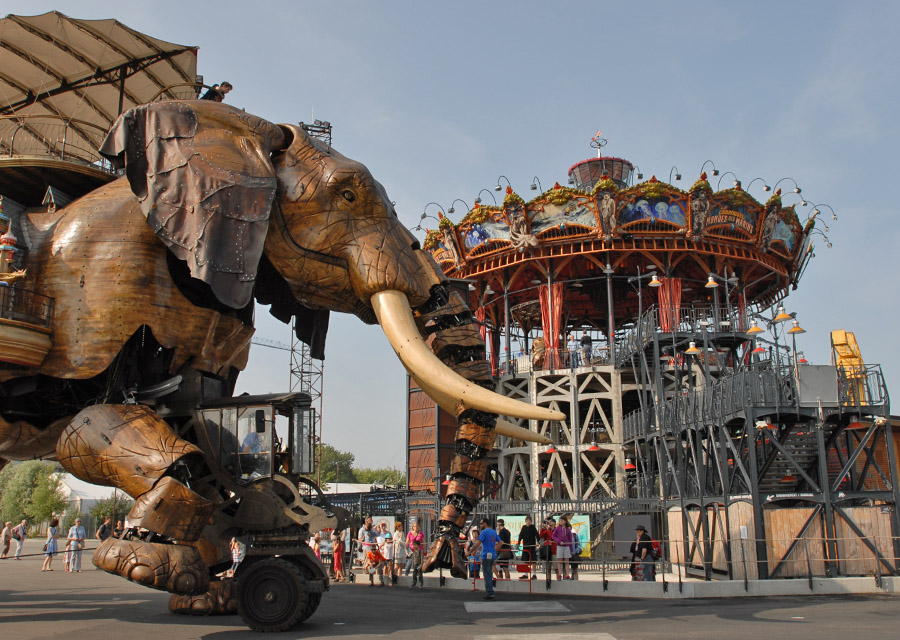 Further to the west, across the elephant's stomping ground, lies the largest carousel you have ever seen – three stories tall, with an even greater collection of weird and wonderful creatures than those found in the children's version.

You can stroll between levels, taking in the detailed and intricate wonder of the nautically themed ecosystems, before selecting the ride of your choice. The middle level is especially magical as the creatures dangle from the floor above, while the bottom floor includes a submarine that rises and lowers beneath the surface. The top level contains legions of beautiful monsters, ships and mythical creatures. 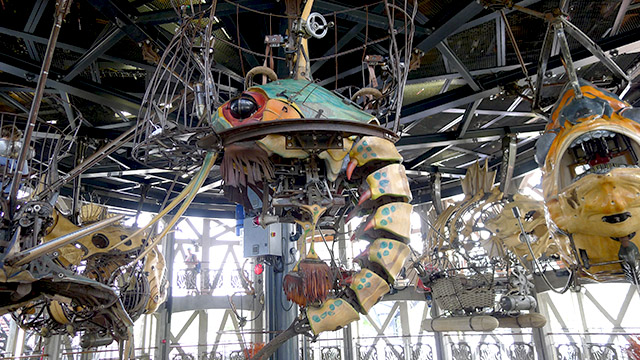 Each station can be "played" as you ride, and you may be guided by the staff in making the most of your choice of creature, with a quick course in how to make the animals come to life with myriad levers and pulleys. Spinning around the carousel high upon the back of a dragon-like sea beast, with the elephant calling in the background, is a magical moment.

The whole project is so removed from most family attractions that it's hard to compare – it's a theatre, themepark and zoo all in one, with a huge dash of steampunkism. And there's no sense that everything is designed remove money from your wallet – the small gift shop has as much space dedicated to design and art books as it does colouring books and toys. It feels like a world totally comfortable within itself.

The reasonably priced and friendly Branches cafe is under the limb of the prototype tree, in the same building as the gift shop. Sandwiches, snacks and delicious pastries are available, with an ice cream stand in warm weather.

For a more substantial evening meal or for a drink or two, walk through the legs of the yellow crane beside the Marine Worlds Carousel and turn left at the end of the jetty to reach The Banana Warehouse, a strip of late-opening bars and restaurants on the banks of the Loire.

Travel tips - Getting to Nantes

Nantes is a touch over two hours by TGV from Paris' Gare Montpanasse, making it a viable day trip from the capital. By road the city is 380km from Paris via the A11.

Nantes Atlantique Airport is 8km from town and is served by flights from easyJet, Flybe, Air France and RyanAir.

Access to the Iles des Machines is free, and you can stroll beside the elephant as it tramples around the deserted shipyard. Tickets for carousels and galleries are very reasonable and can be purchased as you arrive. The elephant rides can be purchased either online or on the day – if you know your arrival date then it is definitely worth booking in advance. Rides last around 45 minutes and you board from one of three different locations as directed on your ticket. 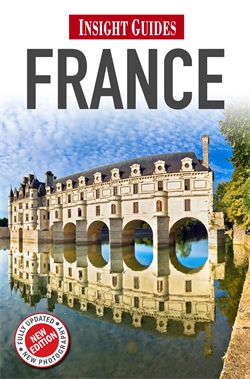 Plan your trip to France

For practical advice on how to plan a trip to France, visit our France destination guide or browse our France guide books.

• An introduction and where to start your trip to France…

• An introduction to Brittany

This tour was one of the highlights of our Paris trip with a family of 4 kids age 12 and 6. Our guide, Roberto, was so knowledgable and enthusiastic. He took us all over the St. Germain area of Paris, and you could tell his love for the city and his profession.... Read more