Golfing next to the Ancient Roman Aqueduct in Rome, Italy 04 Jun 2016

Posted on 04 Jun 2016
Unidentified man playing golf at the golf course next to the Ancient Roman Aqueduct in Parco degli Acquedotti. Famous Aqua Claudia Aqueduct is around 2000 years old. 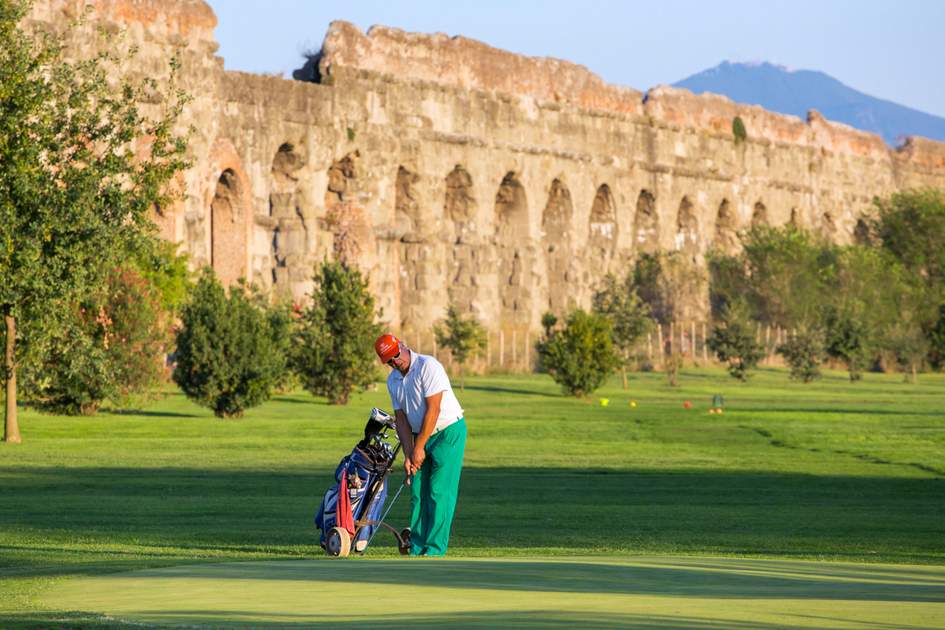 Unidentified man playing golf at the golf course next to the Ancient Roman Aqueduct in Parco degli Acquedotti. Famous Aqua Claudia Aqueduct is around 2000 years old.

The famous Aqua Claudia Aqueduct in Rome is around 2000 years old. Next door is perhaps one of the most picturesque golf courses in the world in Parco degli Acquedotti.

Rome has been coined the Eternal City by countless poets, artists and creatives, and with good reason. It's easily one of the most enchanting travel destinations on the globe. Seamlessly pairing modern and ancient, old world and contemporary, Rome is a tale of two cities. Wandering throughout the streets, you'll quickly uncover its rich past and deep history at every turn. Honoured pilgrimage sites entwine with ancient remains, while top designer shopping rests on the next block; each winding, narrow road leading to one magnificent building or another.

There are certainly no shortage of epic landmarks in Rome, with the Colosseum, the Pantheon, and the ruins of the Roman Forum taking the cake. All the while, Christian basilicas hint at the city's medieval background. They all work in tandem to create a vibe that's all at once grandiose yet charming. The city's architecture and urban design are unique indeed, with the influence of the Renaissance visible in beautiful churches, elegant palaces and the reflective work of famed artists like Michelangelo and Raphael. Meanwhile, Rome's dramatic piazzas, vibrant cityscapes, and over-the-top fountains serve as a throwback to the baroque era.

Spending time in Rome requires a fair bit of slowing down, which can be disorienting to Western travelers who are more accustomed to rushing from one point to another. Instead, locals here embrace a slower way of life, taking their time with day-to-day tasks. It's certainly a change of pace, to say the least. Despite the laid-back attitude, Romans are famously known to be warm and gracious with tourists.

When in Rome, not only should you do as the Romans do; you should also eat as the Romans eat. In addition to the out-of-this-world local fare, the Eternal City is also known the world over for its mouthwatering desserts - especially the gelato. There seems to be a gelateria on every corner here, each one serving up more creative flavour combinations than the next. (Basil with honey, anyone?)

Prepare for your trip: Rome: When to go

Fun facts: Where to get the best gelato in Rome