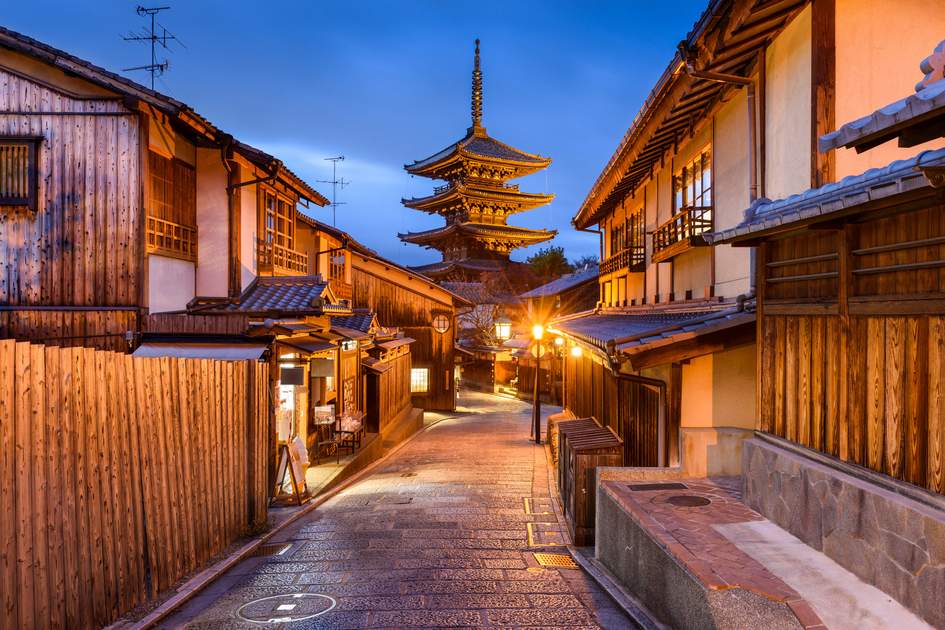 Yasaka Pagoda in Kyoto, Japan, was originally built around 592 AD. Since then, the pagoda has been burned down and rebuilt several times; the structure that stands at the site today was built in 1440 by Yoshinori Ashikaga.

Kyoto is perhaps best known for its breathtaking sanctuaries, Zen gardens, and extraordinary temples. Dozens of museums and hundreds of Shinto shrines can be found here as well. But it's really the spring cherry blossom that Kyoto is most famous for. Every year, the flowers come out in full force; a dazzling, downright gorgeous array that attracts countless admirers. Maruyama Park is a particularly lovely place to see them. In fact, crowds of people are known to gather here in the evenings during peak season specifically for flower-viewing parties (also known as hanami).

Kyoto itself is a charming throwback to traditional Japan. While Osaka is known for its entrepreneurial spirit, and Tokyo takes centre stage for having the national government, Kyoto is revered for its artistic sensibility and rich history. That said, Kyoto is anything but calm and quiet. Instead, it's still very much a buzzing metropolis.

Among Kyoto's most popular tourist destinations is the Imperial Palace, as well as the Katsura and Shugakuin imperial villas. If it's classic Japanese architecture and design you're after, this is where you'll find it. In the east of the city is Kiyomizu Temple, which is one of Kyoto's oldest temples. It's also easily one of the most gorgeous sights in Kyoto, if not all of Japan. From the main hall, steps lead visitors down to a waterfall where they can drink from a fresh spring. What's more, the fall foliage is said to be positively breathtaking.

Speaking of autumn foliage, Kyoto is definitely a stunner. (Mid-November to mid-December is the best time of year to catch it. This is the place to really see fall in action, with pops of burned yellow and golden orange at every turn.

Japan, in general, has a mixed feel. Some say it's morphing toward Western ways, others still see it as honouring ancient tradition. The country itself is actually made up of nearly 4,000 islands, with four of them being recognized as the major standouts; Hokkaido, Shikoku, Kyushu and Honshu. (Kyoto, Osaka and Tokyo are all located on the main island of Honshu.)

See it for yourself with a tailor-made, luxury trip to Japan.

Get lost in a guidebook: Insight Guides: Japan

Read more: 17 places to visit in Asia this year