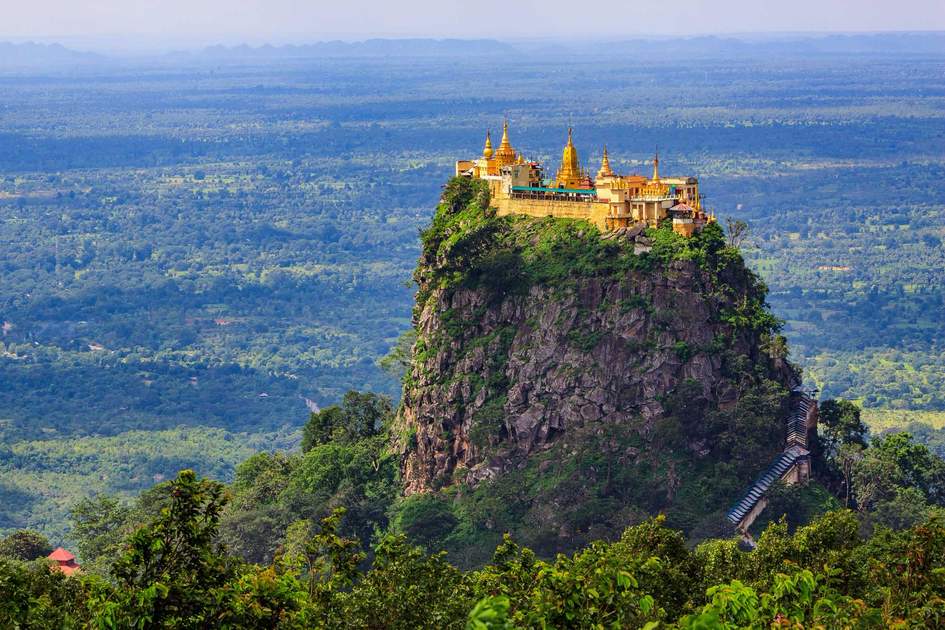 The most popular excursion from Bagan is to the nat temple at Popa Taung Kalat, some 50km (30 miles) south- east. Confusingly, this spectacular pilgrimage place, which centres on an eerie outcrop of rock rising sheer from the plains, is often referred to as “Mount Popa”, although strictly speaking this is the name of the much larger mountain rising immediately to the east. The name “popa”, Sanskrit for “flower”, is believed to derive from the profusion of blooms nourished by the famously fertile soil of the mountain.

Popa Taung Kalat is a major centre of nat worship in Myanmar, particularly associated with the four “Mahagiri” (“Great Mountain”) nats who are believed to reside on nearby Mount Popa, as well as the many other nat spirits of the Burmese supernatural pantheon. Worshippers from all over Burma come here to propitiate the assorted spirit deities installed both in the nat temple at the base of the hill (with its impressive, slightly spooky gallery of nat mannequins) and in the various shrines which dot the steps up the hill.

From the nat temple, a covered walkway lined with stalls selling religious souvenirs winds steeply up the hill itself, culminating in a small, 737-metre (2,417ft) plateau. The walk up takes around 20 minutes and ends at a gleaming complex of Buddhist and nat shrines from whose terrace a magnificent panorama extends across the plains to the Rakhine hills, rising from the dust haze on the horizon.

Very nice trip in Myanmar's backyard ...in Mrauk U.