What to do in Seoul

In the vast metropolis of South Korea’s capital, Seoul, gleaming skyscrapers, neon-lit streets and high-tech convenience happily coexist alongside dynastic palaces, temples and ancestral shrines, generating a uniquely spirited energy. Here is our guide to what to do in Seoul. 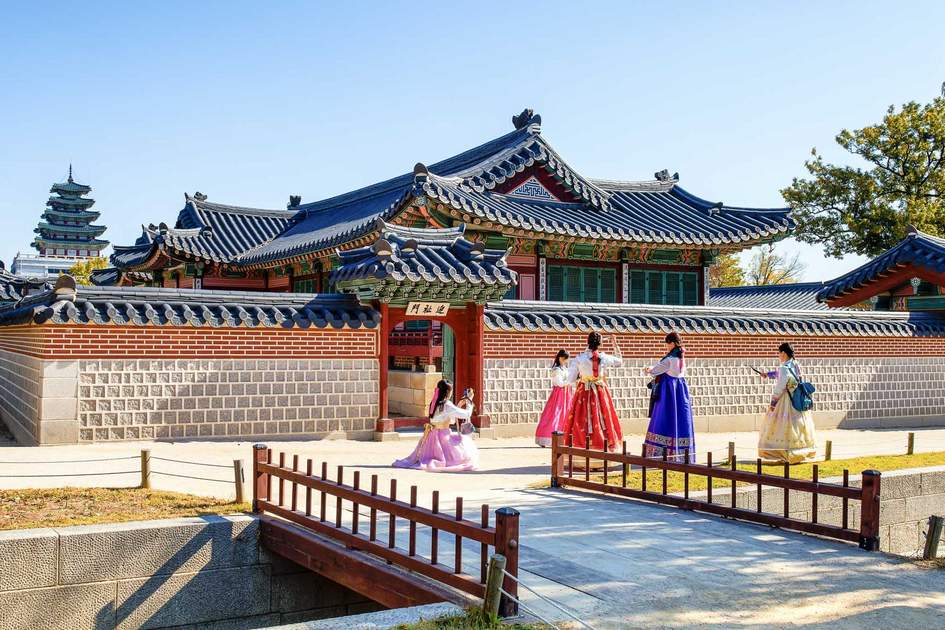 Dating from the 14th century, Gyeongbokgung is historically the most important of the five palaces in Seoul. Strolling along the paths between its magnificent tile-roofed buildings, with views of the majestic peaks of Bugaksan mountain in the distance, is a truly memorable experience. Substantial reconstruction of dozens of buildings has returned the palace to the full former glory of its peak during the 16th century, before the destruction wreaked by Japanese invasions and the subsequent Korean War in the mid-20th century.

Highlights of the expansive complex include the imposing yet graceful, two-tiered former throne room, Geunjeongjeon. Set in the first courtyard after the palace’s southern gate, this grand hall with golden dragons on its ceiling houses the royal throne, and was where the king dealt with state affairs and received visiting dignitaries. West of the throne room, the colossal Gyeonghoeru pavilion possesses an elegant, timeless beauty and overlooks a tranquil lotus pond, which made it a favourite subject with artists during imperial times. The palace also encompasses the National Folk Museum, which showcases Korean culture and ways of life, and the National Palace Museum which houses exhibits detailing the history of the Joseon dynasty.

Forming a natural northern boundary to the city and within easy reach of central Seoul lie the undulating pine forests and towering white granite peaks of Bukhansan National Park. Its proximity to one of the most populous cities on the planet makes it the world’s most visited national park and its trails are often very busy. But if you visit in midweek, as you walk from the Sanseong entrance towards the soaring peaks of the park’s southern section, downtown Seoul will feel a world away. It’s takes around two hours to climb the highest peak in the park, Baekundae at 837 metres. It’s a fairly long slog up to the top, eventually necessitating the use of steel stairways, but when you finally get there you can take in spectacular panoramic views from the summit. 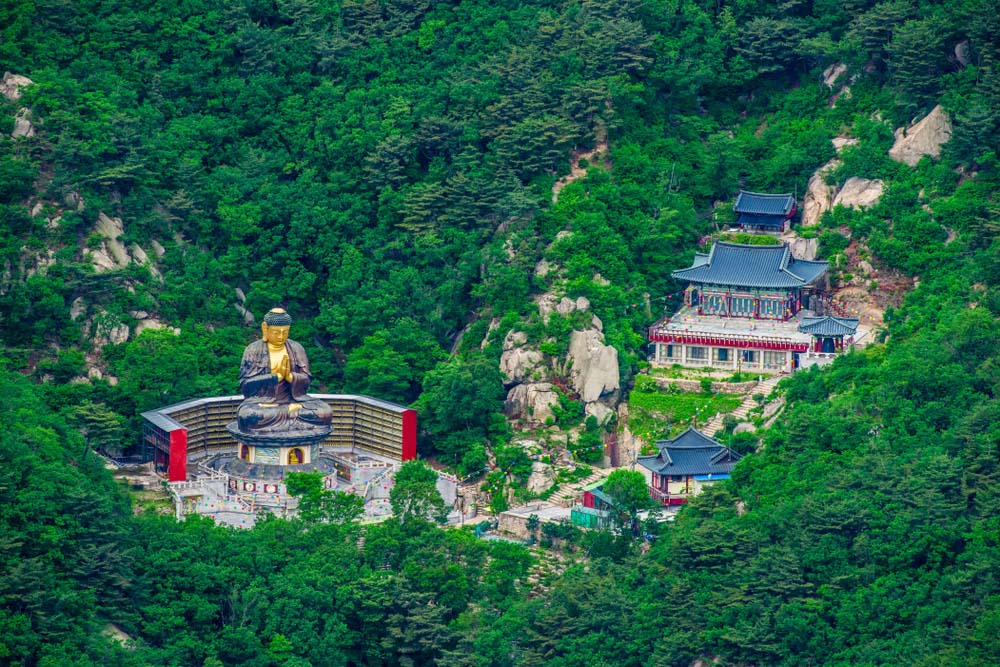 For breathtaking views over the expansive metropolis that is South Korea's capital city, hike, take a cab, or ride the cable car up the wooded hill in Namsan Park, in the heart of Seoul. There you can take the express elevator up to the indoor observation platform and open-air terrace at the top of the N Seoul Tower. Take your pick of the range of restaurants where you can dine at around 240 metres above the park, which is around 500 metres above the city, while taking in a 360º panorama of the skyline. 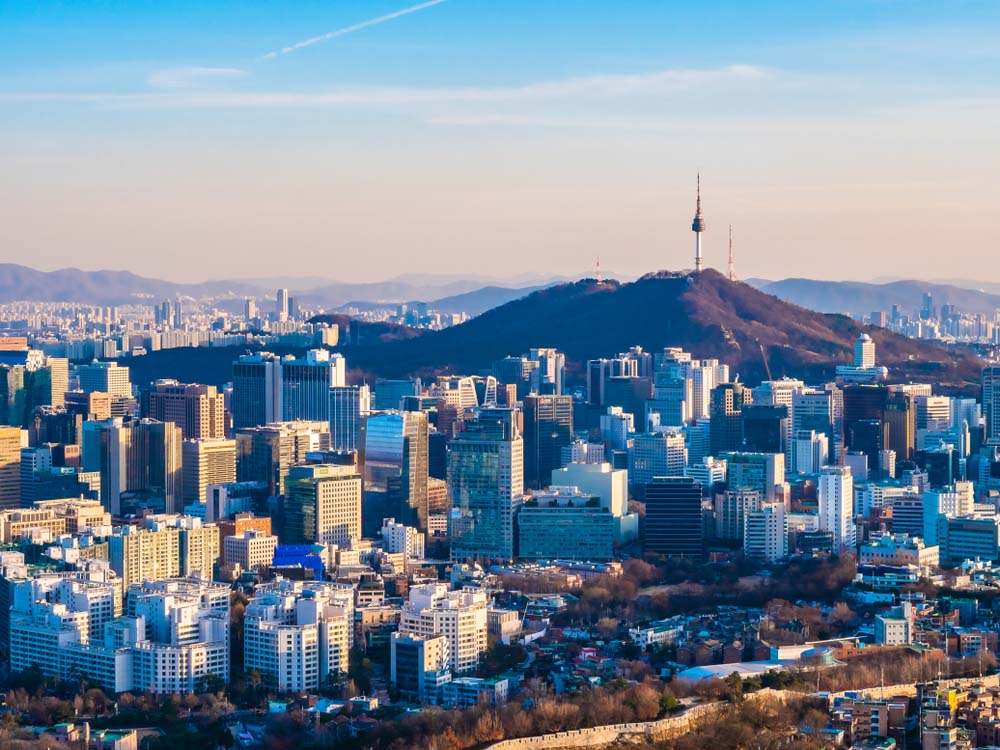 A section of the vast Dongdaemun Market, Kwangjang Market is a great place to browse for vintage and second-hand clothes by day, but the area really comes alive after dark when clothes stores pump out music and the air is filled with the aromas of food sizzling at street-side stalls. All manner of weird and wonderful dishes are available in the many covered arcades, but most people go for bindaeddeok – fried mung-bean pancakes, washed down with bottles of makgeolli – creamy, sweet rice wine.

An oasis of calm amid a plethora of skyscrapers to the south of the Han River, Bongeunsa is the most attractive major Buddhist temple in the capital. There has been a temple on the site since the 8th century, but all of its current buildings were constructed relatively recently. Nevertheless, the temple’s main hall of carved dark wood is wonderfully calming and the beatific smile of the 28-metre-high stone statue of Maitreya, the Future Buddha, is undeniably tranquil. 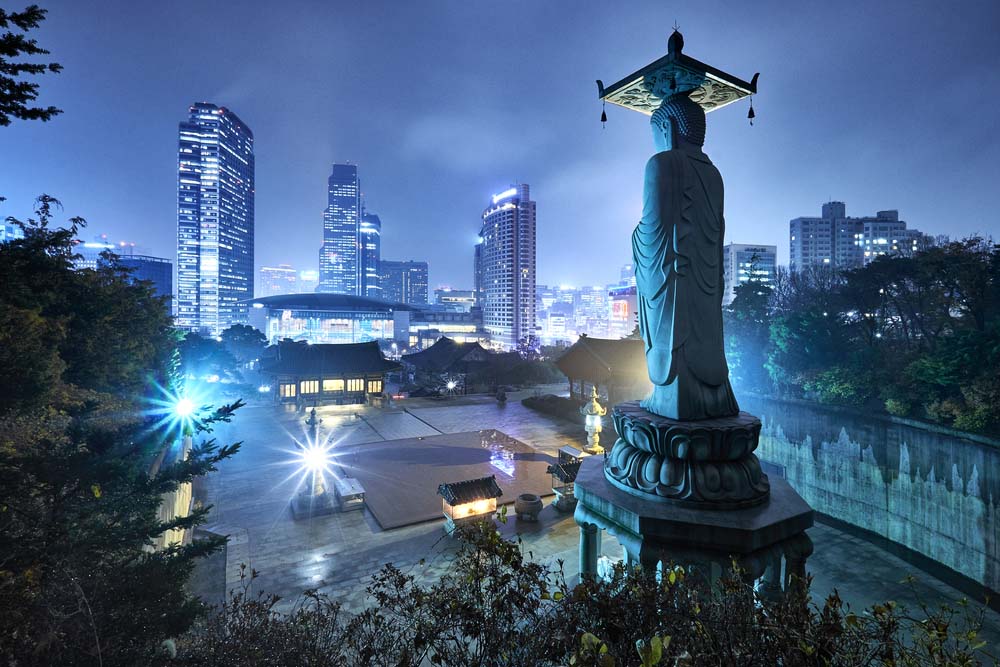 The charming district of Insadong is a time-honoured location for antiques dealers. Numerous shops sell fine Goryeo celadon, Silla pottery and Joseon-era furniture. The area's maze of narrow streets and back alleys is also home to abundant art galleries, small restaurants and junk dealers. Insadong is also known for its teahouses, where bell jars of dried herbs line the shelves. One of the most pleasant, Dawon, is located in the grounds of the Kyungin Museum of Fine Art. In traditionally styled rooms with antique furniture, or out in the courtyard, you can sip aromatic brews made from magnolia berries (omija), ginger root (saenggangcha), lemon (yujacha) or plum (maesilcha).

Food is one of the highlights of a trip to Seoul. Dining in Korea is a communal experience and meals are frequently for sharing. Barbecue houses, known as gogitjip, where diners barbecue marinated beef, chicken or pork at their tables over glowing charcoal or gas burners are popular. As are bibimbap rice dishes topped with a mix of sautéed vegetables, hot broths and either beef, spicy squid or curry. One Seoul’s best restaurants for bibimbap is the traditionally styled Mongmyeok Sanbang on the Namsan walking trail near the lower cable car terminus. 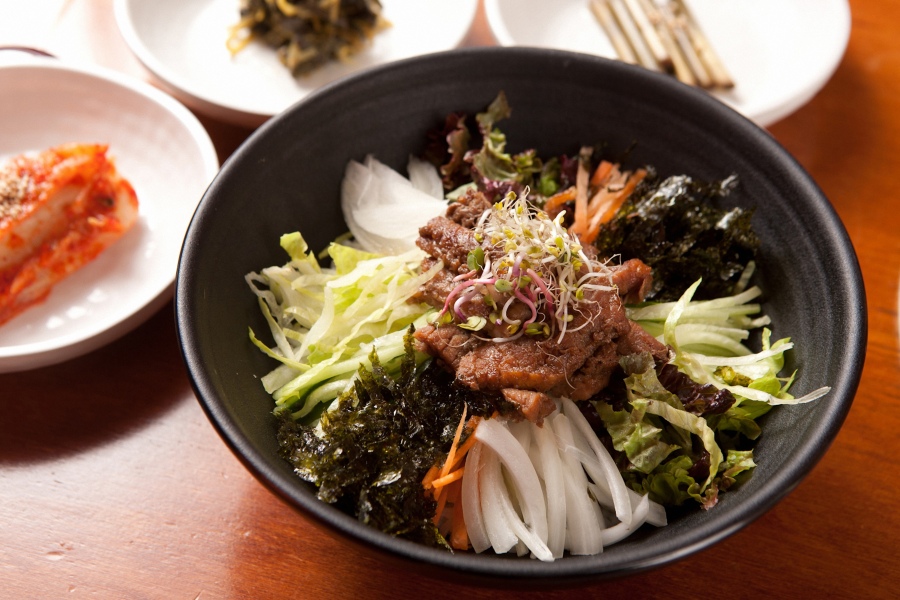 Characterised by its traditional wooden hanok houses with tiled roofs, which have been preserved by the city authorities, Bukchon Hanok Village is one of Seoul’s most charming districts. Its web of quiet, hilly lanes is home to teahouses, cafés, traditional museums and workshops producing quintessential Korean products.

Hanok abodes once covered the entire country, but the majority of those that survived the Japanese occupation and civil war were knocked down during the country’s economic revolution, and replaced with high-rise apartment buildings. From the top of the steep incline of Bukchon Hanok Il-gil lane there is a particularly good view of the hanok houses, making a stark contrast with the high-rise architecture of the city beyond and posing questions about how Korea might have looked had its progress towards prosperity been taken a little more gently. 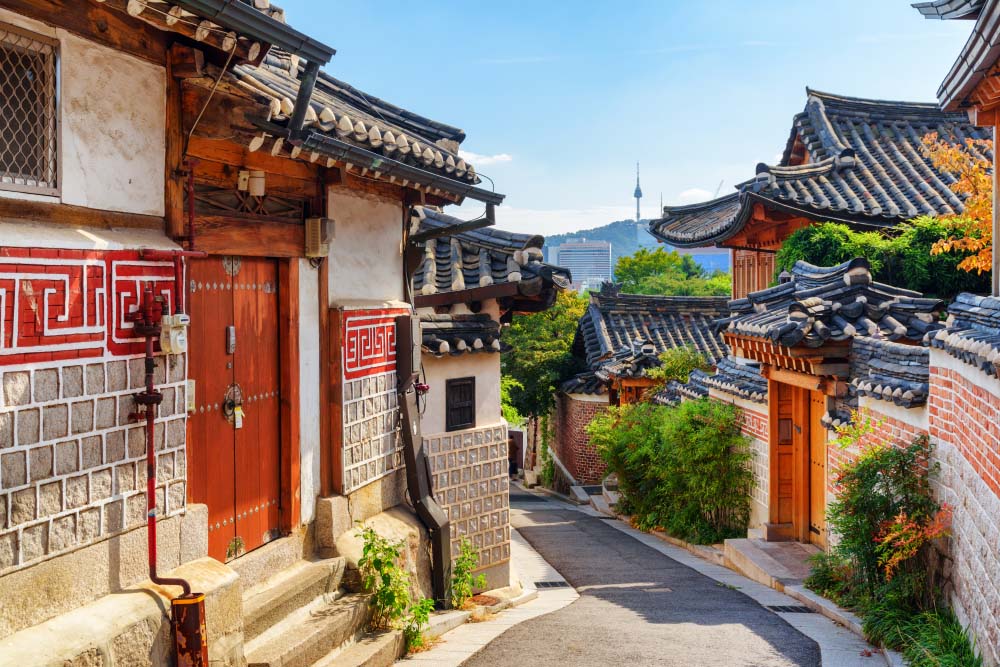 Ready to take a trip to South Korea?

Our local experts can organise complete tours for you in South Korea, taking in selected highlights in the country. Just get in touch letting us know your travel preferences and when you'd like to visit. We will then create a tailor-made itinerary that you can amend until you're completely happy with every detail before booking.