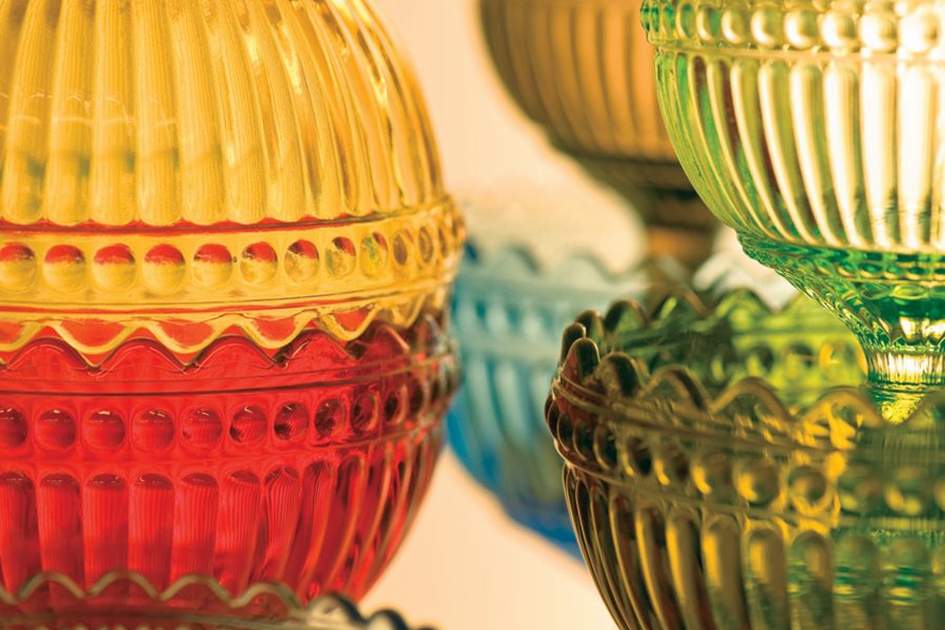 Finland has long been at the cutting edge of modern design, and today’s artists sculpting in glass and wood are no exception.

In view of the prominence of its modern glass design, it is surprising that Finland’s glassmaking industry dates back only to the late 17th century, when the first glass factory, at Uusikaupunki on the west coast, enjoyed a brief life.

Glassmaking was the first design industry to make attempts at breaking away from copies of standard European prototype designs. A turning point was a competition staged by the Riihimäki glass company (named after the southern Finnish town of the same name, today the home of the Finnish Glass Museum) for the design of cocktail glasses. Individual glass designers began to make names for themselves, not least Aino Aalto, who was upstaged by her husband Alvar in 1936 when he contributed his celebrated Savoy vase to the Milan Triennale.

Gunnel Nyman became well known in the following decade for his designs for Iittala, Riihimäki and Nuutajärvi, setting standards which were then equalled and later surpassed by designers such as Tapio Wirkkala (the frosty surface of the Finlandia vodka bottle is thanks to him), Kaj Franck and Timo Sarpaneva. Eero Aarnio and Yrjö Kukkapuro were other notable design innovators of the period.

Their traditions of style and a distinctively Finnish grace have been maintained more recently by the likes of Brita Flander, Vesa Varrela and Heikki Orvola. The Young Finnish Designer of the Year 2012 was the versatile Linda Bergroth, whose works encompass everything from garden sheds to an unusual gavel for the Finnish Parliament. Harri Koskinen, a former winner of the same prize, has done extensive work for Iittala, producing lamps, glass and industrial design work that has garnered international acclaim.

Art from the forests

Finland has also been exceptionally good at taking its natural resources and utilising them for design purposes. Finland’s forests have always been the country’s most plentiful and sustainable natural resource, and the traditions of woodcraft were crucial to every aspect of Finnish agrarian life right into the early 20th century, providing shelter, tools and even clothing. The old quarters of Porvoo, 50km (30 miles) to the east of Helsinki, and Rauma, on the west coast, preserved since the 17th century, contain charming remnants of wooden house-building skills.

These basic timber patterns used in rural buildings around the country are today preserved in the structure of the country’s lakeside log cabins and saunas. But wood has also been adapted with characteristic Finnish innovation to everyday functions, most notably with Alvar Aalto’s ‘bentwood’ technique that skilfully moulds birch into laminated fluid curls and curves. Since Aalto’s time, other architects have picked up the technique and run with it: Lahti’s Sibelius Hall (2000), the Kamppi Chapel of Silence (2012) and the Finnish Nature Centre Haltia (2013) are just some of the most recent buildings to take advantage of its strength, flexibility and acoustic properties. 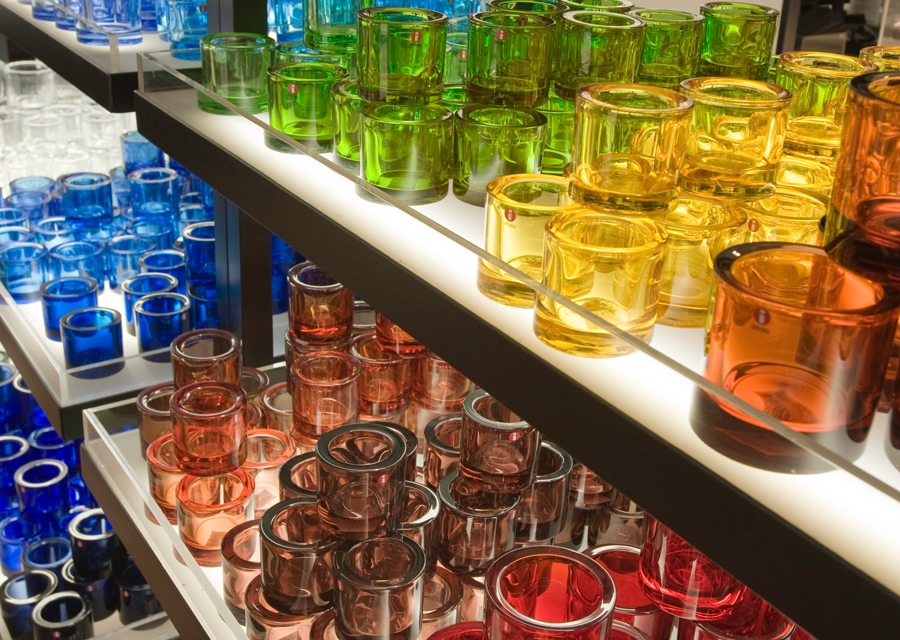 There is boldness in the field of design, too. Whatever the object – a tap, a telephone, a bowl, a chair – if its lines are smooth, if it employs modern materials like chrome or plastic with confidence or reinvents glass or wood, and if it fits its purpose perfectly, it is likely to be Finnish. Encouraged, like architecture, by the financial and prestigious carrot of open competitions, everyday items are ceaselessly redesigned and reinvented.

It’s an environment that has given rise to the creative spirit of the spiky inventions of internal and industrial designer Stefan Lindfors (born 1962) on the one hand, and the gentle paper jewellery of Janna Syvänoja (born 1960) on the other. Finland’s giant names in the plastics (Neste), ceramics (Arabia), textiles (Finlayson, Marimekko), jewellery (Kalevala Koru, Lapponia) and glass (Iittala, Nuutajärvi) industries periodically introduce pieces by new designers as well as those with established reputations such as Yrjö Kukkapuro, whose contemporary furniture is now displayed in New York’s Museum of Modern Art.

Marimekko, specifically, is one of the country’s most recognisable names, offering modern interpretations of kitschy, polka-dot styles that are some of the trendiest-looking items in the world today. In fashion, Hannah Sarén’s must-have handbags have featured in Sex and the City; while Ivana Helsinki’s one-off pieces of clothing, often made using traditional Finnish techniques, have graced the catwalks at the Paris and New York fashion weeks.

What and where to buy Finnish design

If people know anything at all about Finnish design, it is often the fact that Finns apply the smooth contemporary lines often associated with Finnish architecture to jewellery, woodwork, clothing, glassware and sculpture.

The Design Museum in Helsinki (Korkeavuorenkatu 23, 00130 Helsinki) is a great place to find out more, with 75,000 Finnish-designed objects in its collection.

Lapponia and Kaleva Koru jewellery are expressly Finnish, the first being a mainly contemporary collection and the second a collection based on designs from the Finnish epic poem Kalevala, rendered in silver, gold, and also in more affordable bronze.

Aarikka, another jewellery designer, also puts out some of the finer woodwork products, including chopping boards, Christmas decorations, toys and a range of great northern-style gift items. The most impressive ceramic work is commissioned by Arabia, one of the older Finnish firms. Their factory (about 25 minutes’ tram ride from downtown Helsinki) has a small museum upstairs, and first and second-quality goods on sale downstairs.

Pentik is known for its ceramics, as well as beautifully designed textiles.

Iittala makes beautiful glassware at its factory, from drinking glasses to candle holders. Iittala items can also be found at the Arabia factory in Helsinki.

Marimekko is the quintessential Finnish clothing designer, with items made of brightly coloured fabrics for men, women and children, as well as textiles for home use. All these companies can be found both in their own stores and in department stores in most Finnish towns of any size, including Stockmann in Helsinki.

Design District Helsinki is a marketing concept used to publicise the city’s art museums, galleries and designers. It publishes a handy map, available in the tourist office, showing the location of around 100 little boutiques selling clothing, jewellery and quintessentially Finnish homeware. 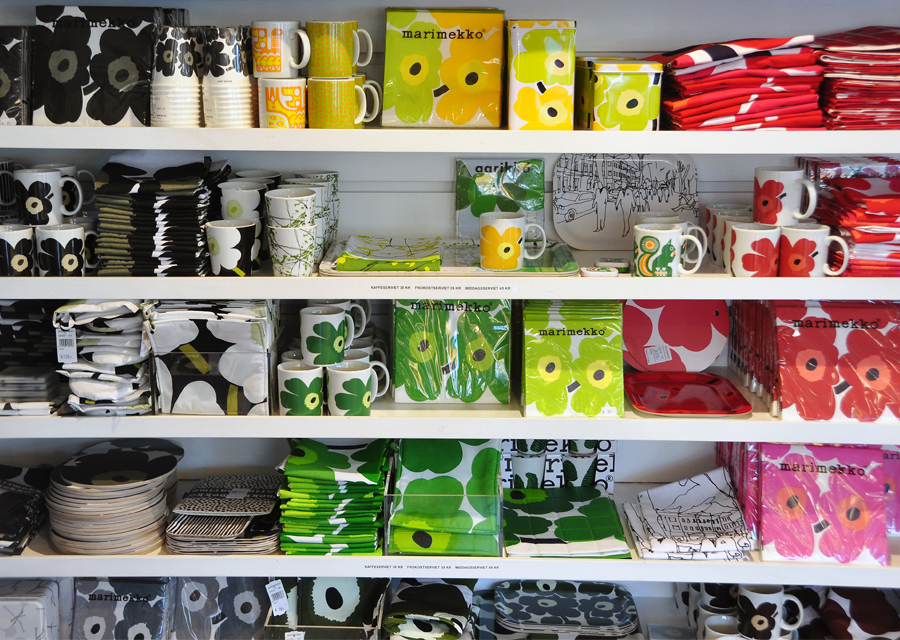 Inspired to go? Buy one of our Finland guides today.