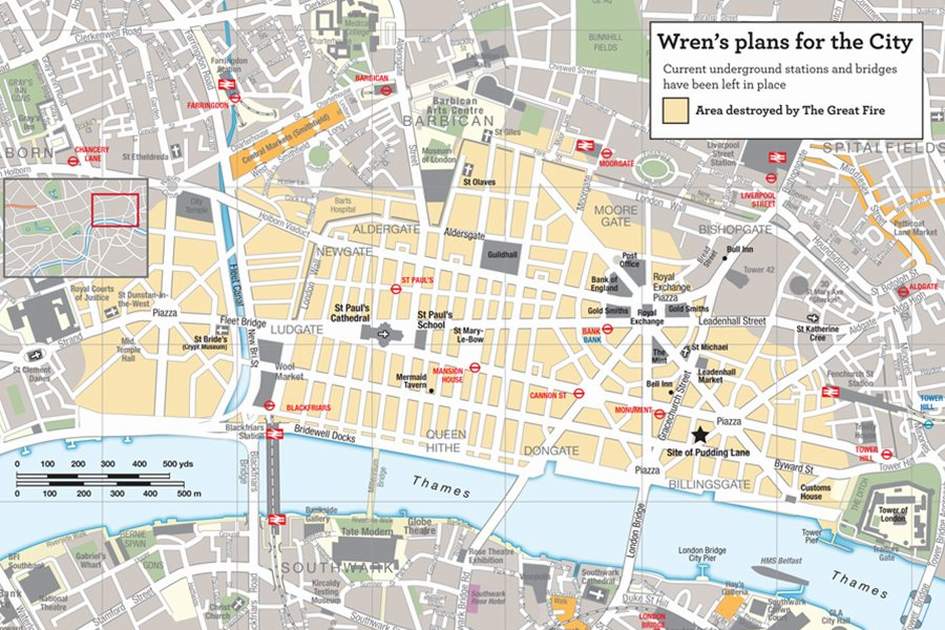 How Wren's vision of London may have appeared today

Early September 346 years ago saw the start of arguably the most famous city fire in history. London was trying to adjust to life during the tail end of the Great Plague that had swept through the city with terrifying effect. The latest and most deadly of plagues had resulted in the death of a fifth of its population (around 60,000) over the previous two years. It is clear why some would have seen the fire as further divine retribution.

In the early hours of the 3rd of September a small fire began in Thomas Farriner’s bakery in Pudding Lane. The flames caught and gradually engulfed the bakery spreading to adjoining buildings and eventually leading to the loss of the heart of the already weary city.

For three days a strong easterly wind fanned the flames into a firestorm hundreds of feet high as the indecision and dithering of officials hindered effective action. The winds eventually subsided and the fire was brought under control, lines of buildings were blown up to produce firebreaks in the process. Thankfully comparatively few lives were lost, especially taking into account the ferocity of the fire and density of housing in the area.

The city needed rebuilding and the opportunity to forge something radically different and new was not lost on Sir Christopher Wren.

Wren was a scientist, architect, astronomer, mathematician and a graduate of Oxford University. He had travelled to Paris the year before the fire and had clearly been impressed by Pierre Bullet’s plans for the impending Grand Boulevards. These wide and majestic roads were a total antithesis to the environment found in the centre of London. The city as it stood was a warren of lanes, streets, paths and dead ends, in places so narrow that buildings almost touched above the streets. The prospect of a blank canvas with which to build a new London must have seemed a wonderous opportunity in which to initiate some of the ideas he had been absorbing.

The vision he lay out saw a number of large piazzas linked in a geometric manner by wide, long boulevards. The north of the River Thames would have become a large open quay and the River Fleet (sometimes named the Fleet Ditch due to its reducing flow) would have been transformed into a Canal, opening up crucial warehouse and docks areas deep into the city.

Space had been identified and laid out for some of the most important institutions of the time. The Royal Exchange, Gold Smiths, the Royal Mint and Post Office were all to be found clustered around the main piazza (already dubbed Royal Exchange Piazza). The Customs House sat next to the Tower of London near the spot the rebuilt version sits today.

The map above shows how the city may have looked today with the boulevards and piazzas in place. Some key sights have been left in place to give reference.

But it was not to be. His grand ideas survived only as a series of carefully draughted plans. The owners of land in the city needed their plots returned and new property built as soon as possible. Funds were low in the city and there was little political or royal inclination to produce anything other than a return to normality.

The city did however require an architect to oversee the reconstruction of the 88 parish churches that had been lost and the job was handed to Wren. He set about the construction of 51 churches and, most iconically, he was responsible for the recreation of St Paul’s Cathedral, a building that ensures his name lives on to this day. The Cathedral has remained in place through the centuries and even managed to survive the ravages of the Blitz during World War II when the city once again burned, most notably on the 29th and 30th of December 1940 when an image of the dome of the Cathedral surrounded by, but not succumbing to, the flames captured the spirits of the city.

If you are interested in the history of London, the Great Fire and Christopher Wren then a trip to the Museum of London near the Barbican Centre is a must.

See all of our great travel guides for London and England...