Costa Rica is well known for its abundant and colorful wildlife, including several species that are currently fighting for survival. Here, we take a look at 10 endangered species in Costa Rica. 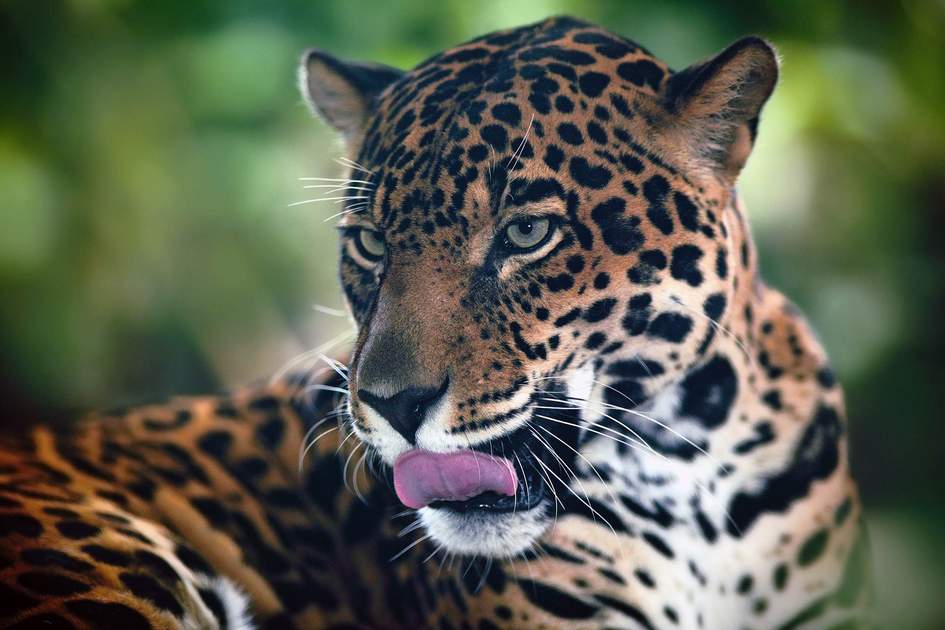 Jaguar in its natural habitat in the Costa Rican tropical forest. Photo: Shutterstock

From glorious beaches to tropical cloudforests, Costa Rica’s landscapes are the stuff of dreams. They are literally teaming with colorful wildlife; the country can count more than 5% of the world’s total biodiversity – that’s about 165 times the amount you’d expect from a landmass of its size. Its temperate zone is largely to thank for the 250 mammal species, 400 reptile and amphibians, nearly 900 species of bat and 250,000 types of insect that call Costa Rica home. Then there’s its profusion of exotic endangered species – more than 200 at last count – the animals that are fighting for their very survival, despite active conservation efforts. From the bizarre Baird’s tapir to sleek mosaic-patterned turtles and the magnificent jaguar, we explore 10 endangered species in Costa Rica.

Listed as vulnerable, these rare little monkeys (30cm) live in large troupes of up to seventy. They are an energetic gaggle, a chattering chorus found in isolated areas of the Pacific coast in secondary wet forest around Manuel Antonio National Park. With a russet-orange back and intelligent little faces, the Central American squirrel monkey has long been hunted to stock zoos and pet cages, as well as being threatened by habitat destruction. Despite this, efforts to conserve the species have been largely successful, and in 2008 the International Union for Conservation of Nature (IUCN) was able to change its conservation status from “endangered” to “vulnerable”. 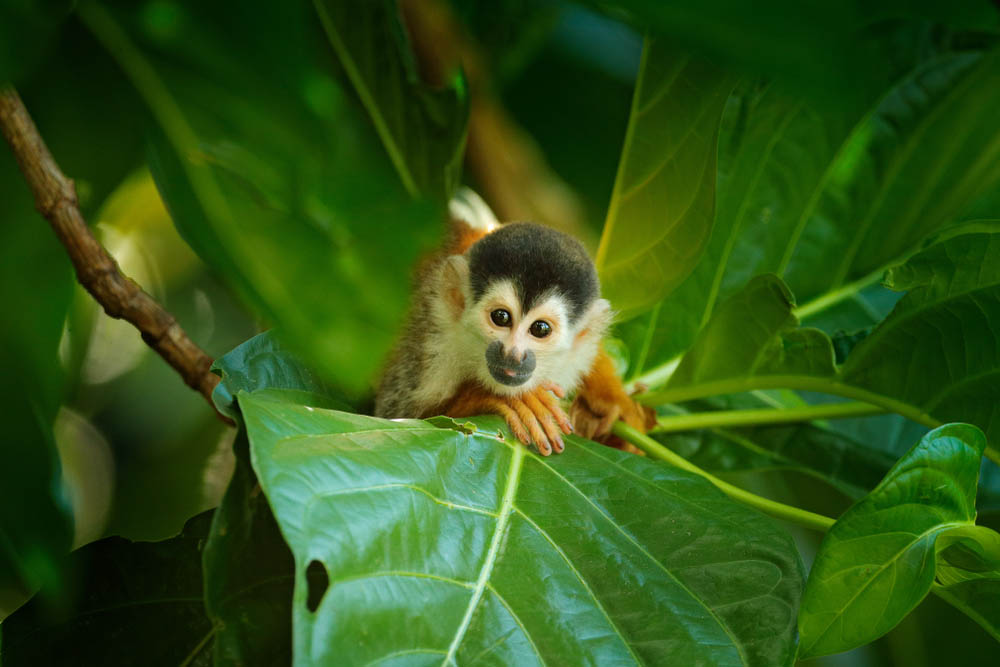 Green turtles have been categorized as endangered since the 1950s – prized for their flesh, which was once commonly used for dishes such as “turtle soup”. Today, they are threatened by egg harvesting, hunting, loss of nesting beach sites and becoming tangled in fishing gear. These marine beauties, with a heart-shaped shell, travel some 2000km to reach their breeding beaches in Costa Rica’s Tortuguero National Park.

One of the most peculiar-looking Costa Rican inhabitants, the Baird’s tapir resembles a large – and trim – pig, with the beginnings of an elephant’s trunk. It’s a shy species, is largely nocturnal and forages for leaves and fruit in dense forest, so is a rare sighting on any trip to Costa Rica. Poaching and habitat loss combined with a slow birth rate have sadly propelled this curious creature onto the endangered list. 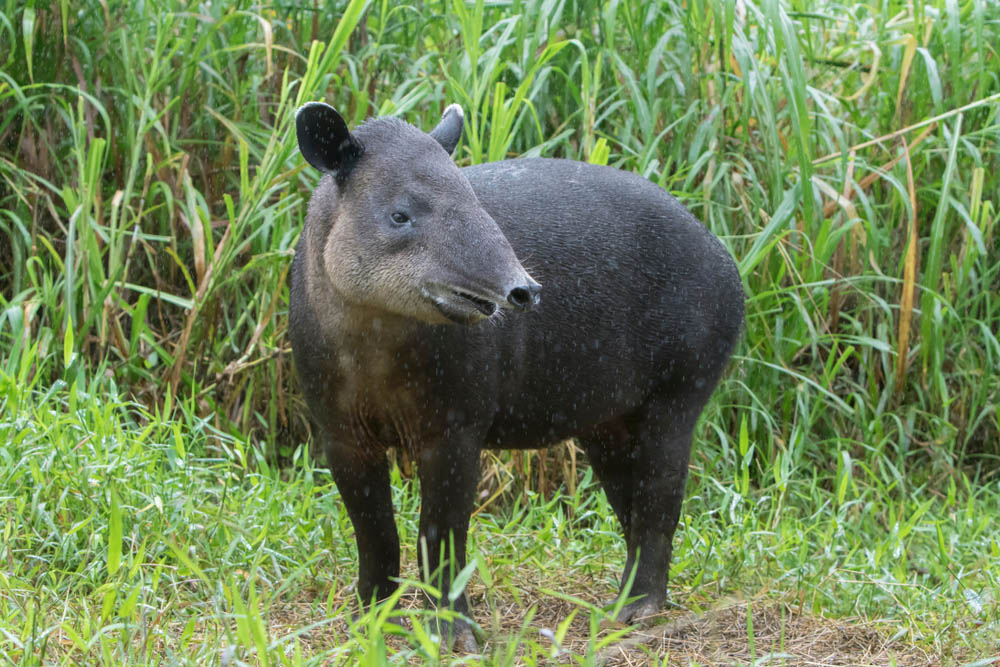 Baird's tapir in the cloudforest of Costa Rica. Photo: Shutterstock

Great green macaws came within inches of extinction in Costa Rica, but numbers are rising once again due to concerted conservation efforts. Feeding on mountain almond trees, great green macaw numbers plummeted as logging uprooted the branches they relied on for food. Conservation work has focused on protecting the birds’ native habitats, but numbers have also been boosted by an adaptation to feed on sea almond trees – an invasive tree species first brought over from South East Asian more than a century ago. 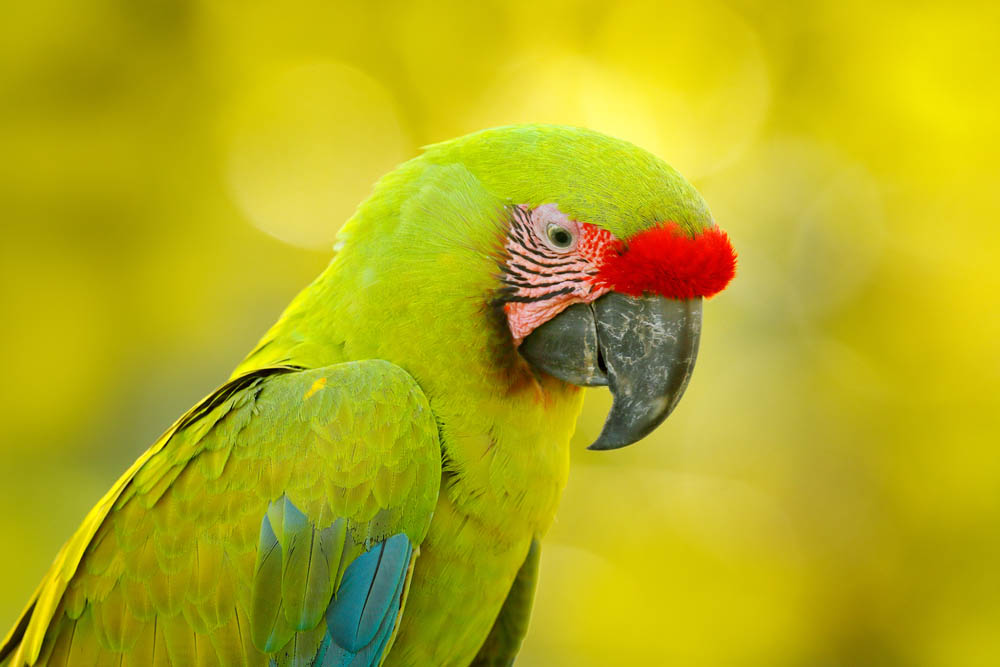 The critically endangered Hawkbill turtle has a heart-shaped shell just like the Green turtle, as well as the classic “tortoiseshell” mosaic pattern – avoid buying any tortoiseshell goods for this reason. The Hawksbill is named for its hooked beak, and is found in rocky shores and coral reefs across the tropics. Hunting for its meat and shell was once widespread along the entire Caribbean coast, and though the practice is now banned, incidents do still occur.

Though listed as “Near Threatened”, jaguar figures are in steady decline. These magnificent big cats are ferocious hunters: stalking their pray at night, kills are often made with one powerful bite straight through the skull. Their fine dappled coats have sadly seen them hunted right up until the 80s for their pelt, not helped by their reputation for snatching domestic calves and pigs. Unlike most cats, jaguars love water: catching one splashing around – or even fishing – in a river is an unparalleled experience.

The American crocodile – long hunted for its skin to make bags, belts and shoes – is still listed as vulnerable, though the species is now protected. The sight of a hulking croc, gliding beneath the surface in a swamp or muddle shallows, is enough to make even the boldest traveller catch their breath. They live in both fresh and brackish water, and are known for being aggressive and dangerous. Stay well back. 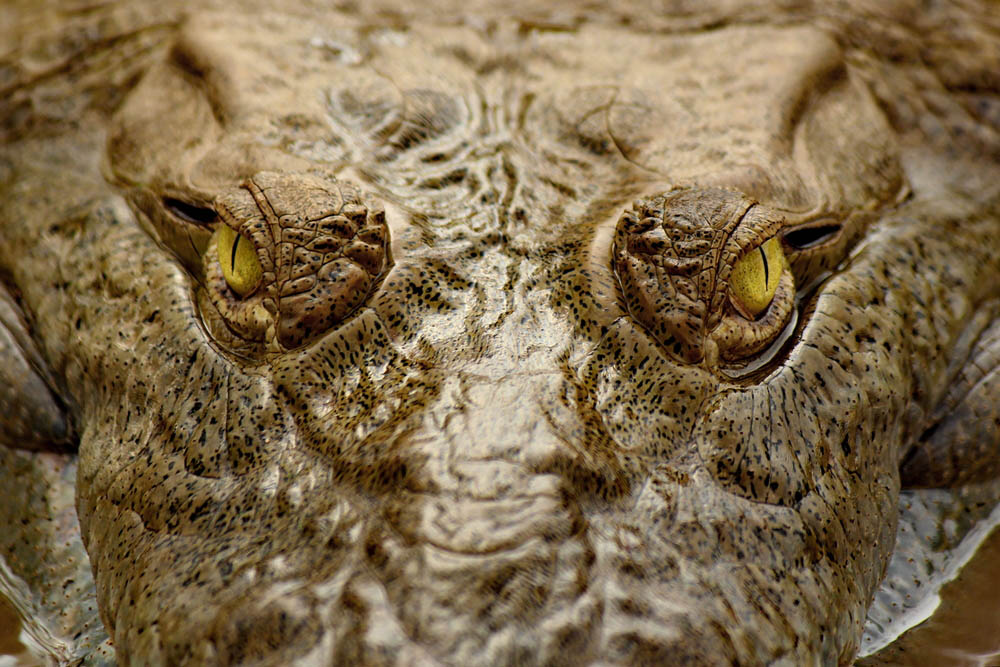 You’re likely to hear the vulnerable three-wattled bellbird before you see it: its “eenk” call is one of the loudest in the world. These brown-bodied, white-headed oddities can be easily identified by the three black worm-like strings that hang from its beak. While conservation efforts are in full swing, bird numbers in Costa Rica’s wet and humid forests are sadly continuing to decrease.

The endangered bare-necked umbrellabird is a Costa Rican and Panamanian endemic; restricted to the wet-forest lowlands of the Caribbean slope, it is hard to spot, being both rare and silent. It has a scarlet-red breast and a cropped overhanging crest that is reminiscent of Elvis’ pompadour. Threatened by habitat loss, hopefully the conservationists can reverse the tide before it’s too late.

They may put the fear in you, but sharks are chronically misunderstood: you are more than 30 times more likely to be killed by a dog than in a shark attack. In fact, no human fatalities by hammerhead sharks have even been recorded. Found in Golfo Dulce in Costa Rica, the scalloped hammerhead shark is critically endangered, threatened by overfishing – especially as part of the illegal shark-fin trade. These formidable fish often group in schools in their hundreds; Golfo Dulce provides an important nursery habitat for these strange-looking sharks.

How do I help?

There are a number of conservation charities that are worthy of your support. The following organizations both carry out important work in Costa Rica – if you have time or resources to help, just get in touch.

Nature Conservancy Arlington VA, USA; local branch San José, tel: 2528 8800, www.nature.org. Though this organization is based in the US, its remit is global. Their work in Costa Rica is focused on the Cordillera Talamanca and the Osa Peninsula. Get in touch through the San José office.

Everything was well organized, all pick ups were on time! The excursions were great, really enjoyed the rafting and ziplining! Could have combined some excursions with transport days to fit in a few more activities. Overall great trip!