12 Easter foods from around the world

Easter, for many, is a time filled with chocolate, cuddly bunnies and Easter egg hunts. But look a little further afield, and you’ll find a wealth of interesting traditions and tasty Easter foods that are unique to destinations around the world. 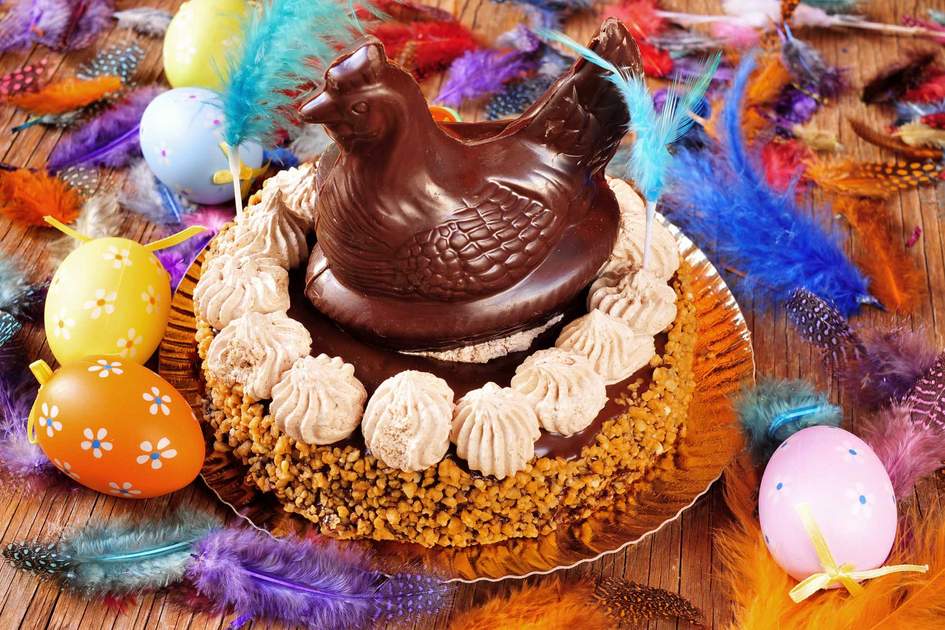 These sweet, spiced buns – usually made with currants or raisins – are a widespread Easter speciality, enjoyed in the British Isles, South Africa, Australia, New Zealand, Canada, Ireland, and some parts of the Americas. Hot cross buns are marked with an iced cross on their tops (hence the name), which symbolises Jesus’s crucifixion. If you want to couple Easter with an unforgettable wildlife safari, book onto Insight Guides’ South Africa’s Big Three: Kruger, Zululand and Swaziland.

Magiritsa is a traditional Greek Easter soup, made with lamb offal and cos lettuce, with fresh herbs and an egg-lemon sauce called avgolemono completing the picture. While Greek Easter soup might not sound – or indeed look – hugely appealing, less spine-tingling is their Easter bread, called tsoureki. Tsoureki is a delicious, braided, brioche-like bread, perfumed with mastic (a spice) and mahlab (made from the seeds of Mediterranean wild cherries). The Greeks celebrate Easter fervently and this is be a great time to visit: experience Greek island hospitality at its finest on The Historical and Mythological Cyclades islands. 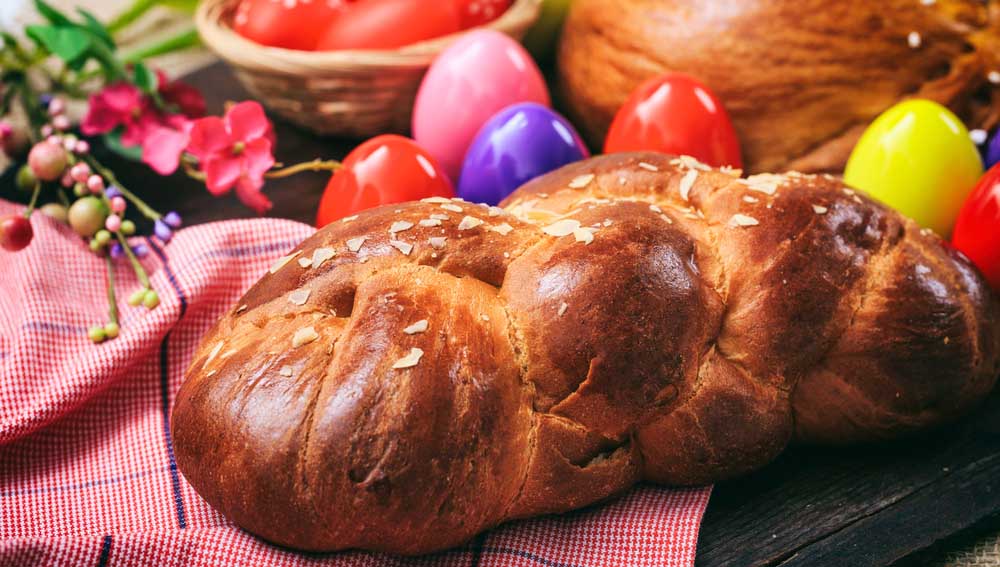 Italy – home of the Vatican City – is a very religious country, where some 95% of people are baptised. Couple this with a splendid, world-renowned cuisine and it is no surprise that there’s a delectable range of delights on Italy’s Easter menu. The traditional Italian Easter cake is the dove-shaped Colomba di Pasqua, similar to its better-known Christmas cousin, the panettone. The Colomba di Pasqua is a soft yellow sponge decorated with sugar and almonds.

Several other Easter foods are popular around the country, from Sicily’s Easter lamb pies to the Genoese Eastertide tart. The Sicilian speciality – in its traditional form – uses a leg of lamb, bones and all. This gives the pie a richer, juicier filling. The Genovese Eastertide tart is filled with swiss chard, and made with several layers of filo pastry. The most traditional version employs a staggering 33 pastry layers – one for each year of Jesus’ life.

So what are you waiting for? Book a trip with Insight Guides today and you can explore Italy’s cultural and culinary wonders. Select From Venice to Florence if you fancy exploring Northern Italy, or alternatively try a tour taking in the Best of South Italy: Rome, Naples, Sorrento and the Amalfi Coast.

Paraguay’s contribution to the Easter recipe book is chipá, a cheesy, chewy bread enjoyed around the country during Semana Santa (holy week). It is made by families at home, sold by street vendors laden with large baskets, and comes in rings – so looks slightly like a bagel or donut. They can be served hot or cold, but are generally best warm and toasty straight from the oven. 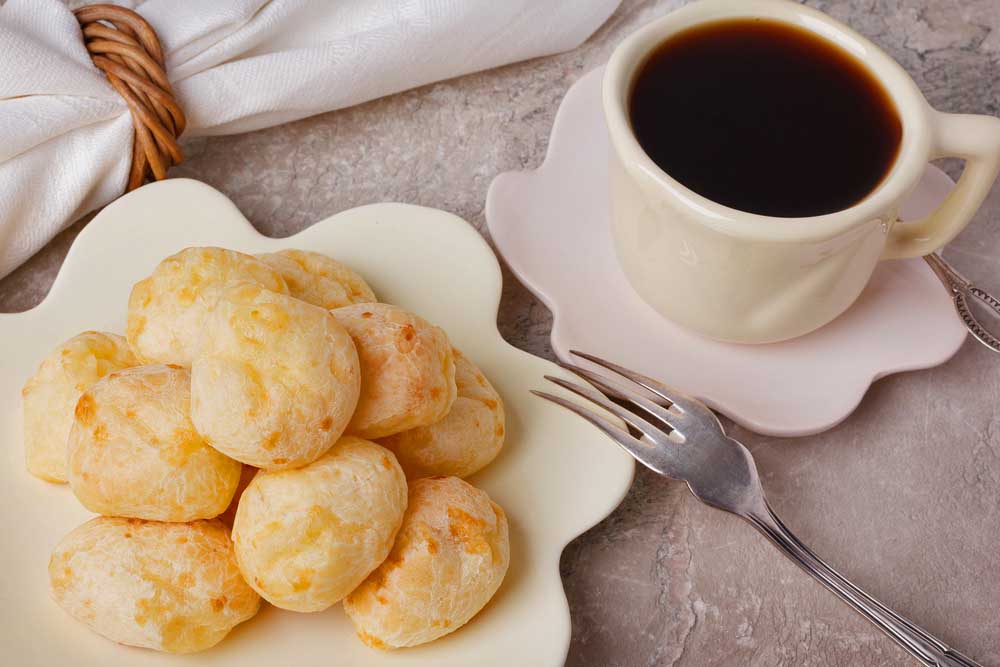 In many regions of Spain, especially Catalonia, a special Easter cake called La Mona de Pascua is eaten; Catalonia’s bakeries expect to sell a whopping 600,000 cakes during Semana Santa. Traditionally, the cake – once adorned with feathers and topped with boiled eggs – was gifted by a godfather to his godsons and goddaughters on Easter Monday, and is thought to date back to the 15th century. The word Mona is a Moroccan term for gift, whilst de Pascua means ‘of Easter’.

Today’s incarnation is a kitschy affair, filled with apricot and topped with chocolate glaze and chocolate eggs, bright feathers and cartoon characters. Pick up your very own Mona de Pascua in Barcelona with Insight Guides' Cultural Cities of Spain trip.

The Polish Easter dish – Bialy barszcz or Polish white borscht – is another that may not appeal to all. Most recipes include hard-boiled eggs, sausages and vegetables, often with fresh horseradish, cooked in a creamy and slightly sour white sauce.

Many of the dish’s ingredients have religious significance for Christians: sausage links symbolise the chains of death that Christ broke to rise again; horseradish reminds us of the bitterness of the Passion; eggs represent new life; and Polish Easter bread symbolises the body of Christ himself. 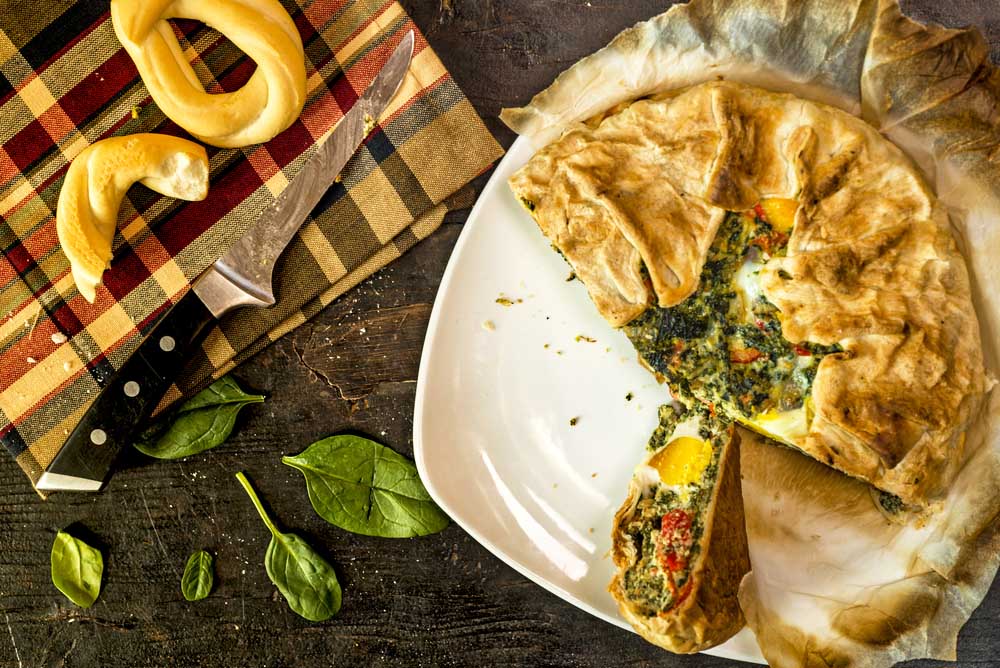 A dish enjoyed throughout Argentina and also popular in Uruguay, Tarta Pascualina is actually believed to have its origin in Liguria, Italy. Believed to date from the 16th century, the tart was brought over by Italian immigrants who moved to Argentina in search of a better life. Essentially a spinach and ricotta pie, it also includes a number of eggs – representing the rebirth. Unsurprisingly – given its Liguria origins, the Tarta Pascualina is very similar to the Genovese Eastertide Tart (see above). Like the Italian version, it was traditionally made using 33 layers of pastry, one for every year of Jesus’ life on earth. Visit Argentina on Insight Guides’ Argentina’s Northern Highlights or Wild Patagonia trip today.

Franesca is a traditional Ecuadorian soup, enjoyed by family and friends during the Easter period. It is made using fig leaf gourd (sambo), pumpkin (zapallo), bacalhau (salted cod) and twelve different kinds of beans and grains. Traditionally, these dozen varieties were cooked and prepared separately before assembling the soup – together they represent the Twelve Apostles, with the bacalhau symbolising Jesus himself. Franesca is typically garnished with hard-boiled eggs, plantain and a variety of herbs. Thinking of visiting Ecuador? Let Insight Guides do all the planning for you and select our Ecuador: History and Culture trip today.

In Finland, Pulla makes a common holiday treat. It is a braided cardamom bread, baked either as a long loaf or in individual-sized knots, and best enjoyed with a traditional accompaniment like cloudberry preserve.

For dessert, you’ll find Mämmi on the menu. It might not look appealing, but for most Finns Mämmi is an integral part of the Easter experience – make sure you at least give it a try. Mämmi is made of flour and rye malt, and is usually eaten with healthy lashings of cream and sugar. You can also find a wide variety of flavoured Mämmi in the shops these days, from cocoa to vanilla. 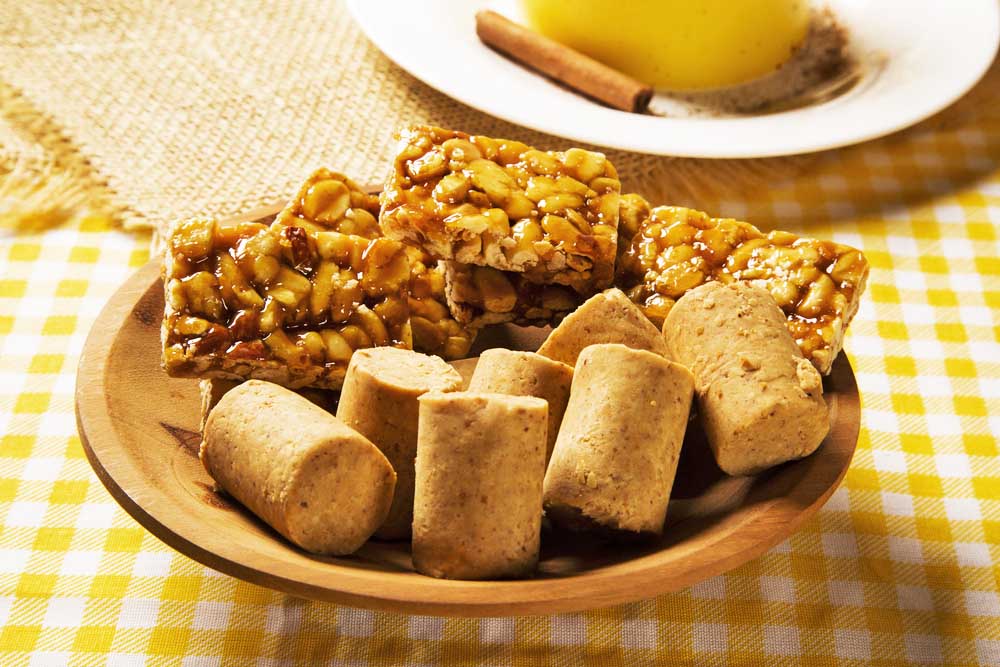 Brazil has the largest Catholic population in the world, so it is little wonder that the Easter period is approached with such gusto. The famous Brazilian Carnival marks the beginning of Lent, and Holy Week – Semana Santa – involves processions and rituals around the country, when many families take advantage of the holiday season and make for the beach and other popular tourist areas.

Paçoca de Amendoim is a typical Brazilian Easter confectionary. It is made using peanuts, sugar and cassava flour, ground down and shaped into blocks or bars. Being high in energy, these sweets were traditionally eaten during the lent period, when meats and other protein-high foods were off the menu. On Good Friday, the obligatory main dish is bacalhau, or salted cod. The popularity of bacalhau is actually a hangover from Brazil’s colonial past; the Portuguese were one of the first nations to incorporate it as a mainstay of their diet. In the Easter week, supermarkets and fishmongers are laden with it.

Soak up the local culture and join in the revelry at Easter time by booking onto Insight Guides’ Blissful Brazil trip.

Mexico’s entry in the Easter foodie stakes is Capirotada, usually served on Good Friday. This is a type of bread pudding, slightly reminiscent of Christmas pudding, with nuts, fruits and figs mixed with – here’s the odd bit – aged cheeses. Some recipes also include meat. This dish includes some highly symbolic ingredients, including bread (body of Christ), syrup (Christ’s blood), cloves (nails of the cross) and cinnamon sticks (wood of the cross).

The celebrations around Mexico are just as colourful – join in by booking Insight Guides' Mexico City to the Yucatán trip. Passion plays are performed around the country; candle-lit processions wind through towns and villages; palm leaves are sold on the streets; painted eggshells are stuffed with confetti; and altarpieces are bedecked in colourful flowers. 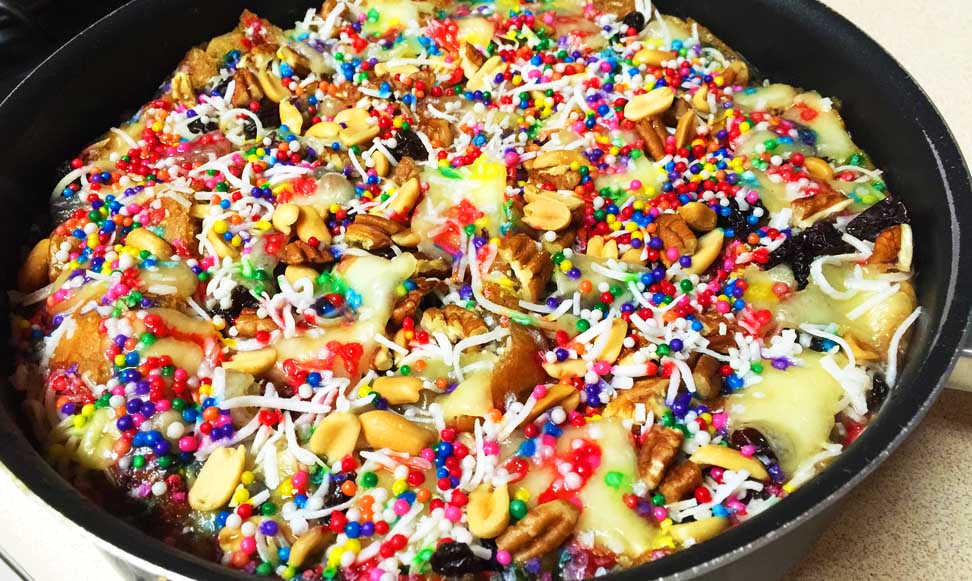 Last but not least, the ultimate crowd pleaser when it comes to Easter delicacies.

Chocolate eggs are synonymous with Easter in many countries around the globe. But eggs – the natural, not the chocolate version – were used as symbols of fertility and rebirth long before Christianity. For thousands of years, Persians have decorated eggs on Iranian New Year (Nowruz), which falls on the Spring Equinox. Others claim the Easter egg has pagan roots.

Whatever culture – or cultures – ‘invented’ the Easter egg, traditions revolving around eggs are abundant: decorating eggs, egg rolling, egg hunts… and, the best of all, eating them.