All about Angkor: A guide to the temples 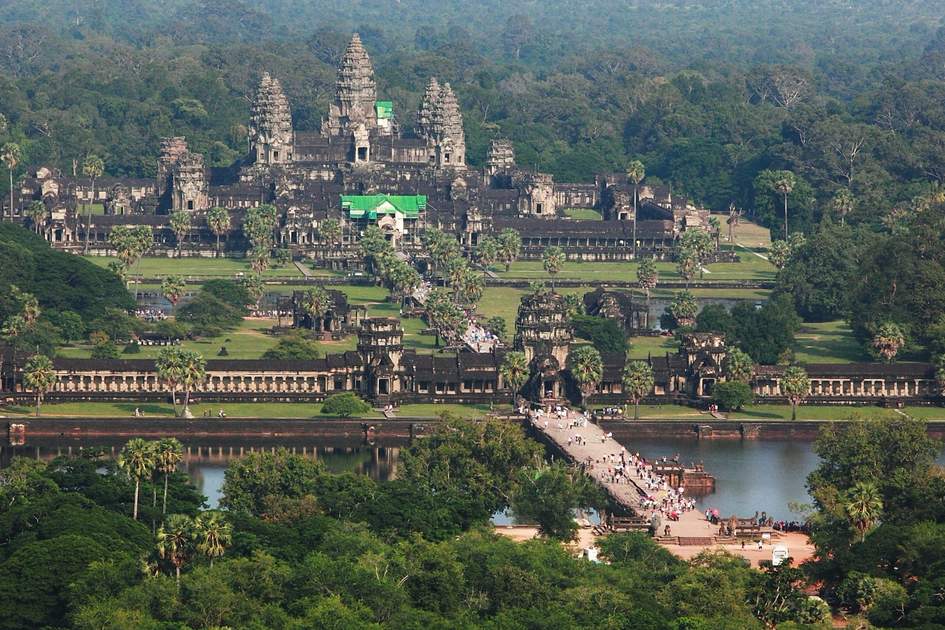 Angkor is often mistakenly known as Angkor Wat. However, Angkor Wat refers to just one part of the rambling complex. Angkor Thom, to the north of Angkor Wat, encompasses many fine temples and palaces, including the Bayon, Preah Khan and Ta Prohm. At Roluos, to the southeast of both Angkor Wat and Angkor Thom, are the earliest surviving Khmer relics in the entire Angkor area, predating Angkor Wat by about 200 years. Most visitors generally take either two or three days to explore the site, but one could easily spend longer.

The entrance to the site is just 5km (3 miles) north of Siem Reap. The road to Angkor leads past the Angkor National Museum. Buy your visitor’s pass or have your pass inspected here before you proceed on your tour. The pass is sold in one-day (US$20), three-day (US$40) and seven-day (US$60) blocks. It cannot be extended and the days must run consecutively.

BOOK IT NOW: You can visit Angkor as part of a guided experience through many of our trips to Cambodia, including Unseen Cambodia and Khmer Cultural Treasures. For more information and for bookings, visit our inspirational trips pages.

In some cases, insiders add that the best way to experience the temples is to branch out a bit.

“While I did spend a whole day checking out the temples of the main Angkor complex, including most popular Angkor Wat, Angkor Thom and Ta Prohm, I also recommend getting outside of the most recognizable spots," says Caroline Eubanks, editor of Caroline in the City. "You can hire a tuk tuk guide to take you further out. Some of my favorites were Bakong, in the Roulos group, Banteay Srei and Beng Melea."

Angkor Thom, or “Great City," encompasses a huge, square area of land enclosed within an 8-metre (26ft) -high defensive wall and outer moats approximately 100 metres (330ft) wide. Each side of the wall is about 3km (2 miles) long, and it has been suggested that, at the height of its wealth and power, the city may have supported as many as a million people. The founder and architect was the Buddhist King Jayavarman VII (1181–1220), probably the most prolific builder the Khmer Empire ever produced.

There are five gateways into Angkor Thom, each approached by a causeway built across the moat. As you approach from the south the view of the fortifications is impressive. The causeway is flanked by 108 large stone figures, 54 gods on the left and an equivalent number of demons on the right. In the distance, at the far end of the causeway, the southern gateway bears four huge enigmatic faces facing in the cardinal directions. 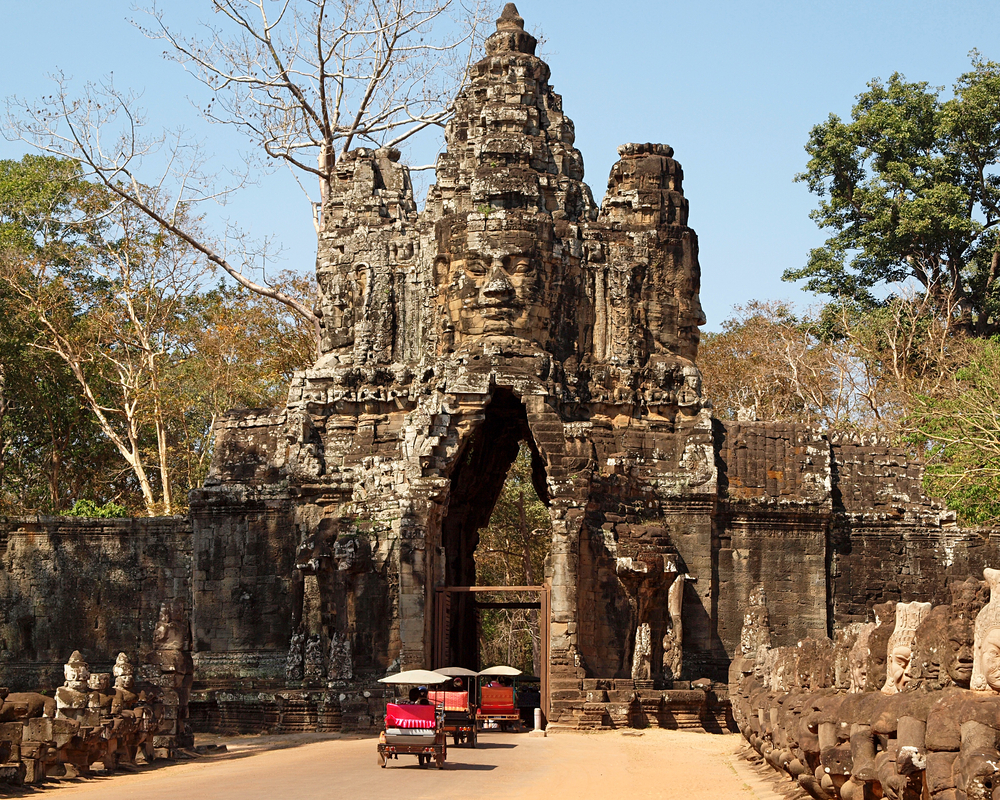 Passing through this prodigious gateway, the road continues northwards for around 1.5km (1 mile) to reach the Bayon 1, at the centre of Angkor Thom. This temple, which should be entered from the east, was built in the late 12th century by Jayavarman VII. Always a favourite with visitors, the Bayon is possibly the most celebrated structure at Angkor after Angkor Wat itself, and justly so.

It is thought to represent a symbolic temple-mountain and rises on three levels, the first of which bears eight cruciform gateways. These are linked by galleries that contain some of the most remarkable bas-reliefs at Angkor; they combine numerous domestic and everyday scenes with historical details of battles won and lost by the Khmers. The domestic scenes, many of which are in smaller bas-reliefs below the main war scenes, show details of fishermen, market scenes, festivals, cockfights, removing lice, hunting, women giving birth, and so on. It is unusual to find such graphic depictions of everyday, mundane life at Angkor, as most bas-reliefs are of a religious nature. There are also everyday scenes from the royal court, including nobles, wrestlers, sword fighters and dancing girls.

To view the bas-reliefs, which are well worth an hour or two of your time, it is best to start near the east entrance to the Bayon and proceed clockwise, via the south wall, keeping the carvings to your right. The East Gallery, which is in an excellent state of preservation, features a military procession of Khmer troops, elephants, ox carts, horsemen and musicians. Parasols shield the commanders of the troops, who include Jayavarman VII. The South Gallery is spectacular and contains some of the finest bas-reliefs of all. The early panels depict the great naval battle that took place on the Tonlé Sap in 1177. The Khmers have no head coverings and short hair, while the Cham invaders wear strange hats which resemble long hair. The fighting is intense, with bodies falling from the boats and sometimes being taken by crocodiles. The North Gallery depicts entertainers such as acrobats, jugglers and wrestlers, as well as local wildlife. 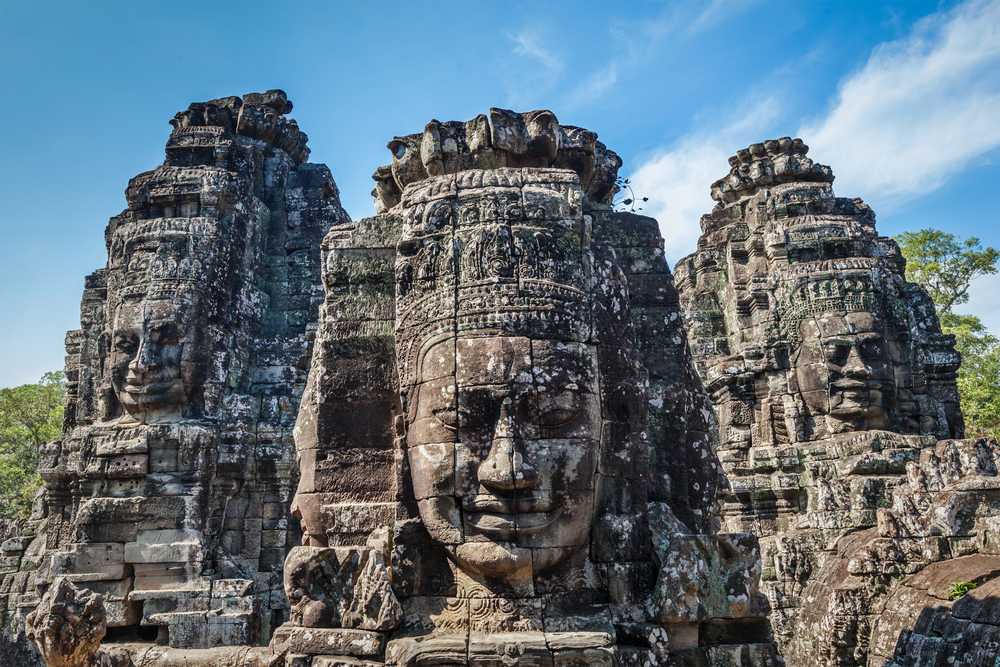 Next is the mighty Baphuon 2 – now open to the public after years of restoration – and the former royal palace of Phimeanakas, where you reach the celebrated Elephant Terrace 3. Also built by Jayavarman VII, this structure is over 300 metres (970ft) long, and has three main platforms and two lesser ones. The terrace was probably used by the king, the royal family, ministers and generals to review their forces, and perhaps to watch other entertainments. The whole terrace is elaborately decorated not only with the sandstone elephants which give it its name, but also with detailed tigers, lions, geese and lotus flowers.

Immediately to the north stands the Leper King Terrace 4. Like the Elephant Terrace, this much smaller structure dates from the late 12th century and is chiefly remarkable for its many bas-reliefs. After seeing this, you should head southwards back to the Bayon and leave Angkor Thom by the South Gate. A few hundred metres beyond the South Gate, to the west side of the road, the hill of Phnom Bakheng rises 67 metres (218ft) above the surrounding plains. This is an ideal spot from which to view the distant spires of Angkor Wat at sunset (although it does get horribly crowded), but it is worth climbing at any time of the day. On the east side, a steep and treacherous stairway (currently closed for improvements) provides a swift but difficult means of ascent. Alternatively, and much more easily, a winding path leads to the summit via the south side of the hill. 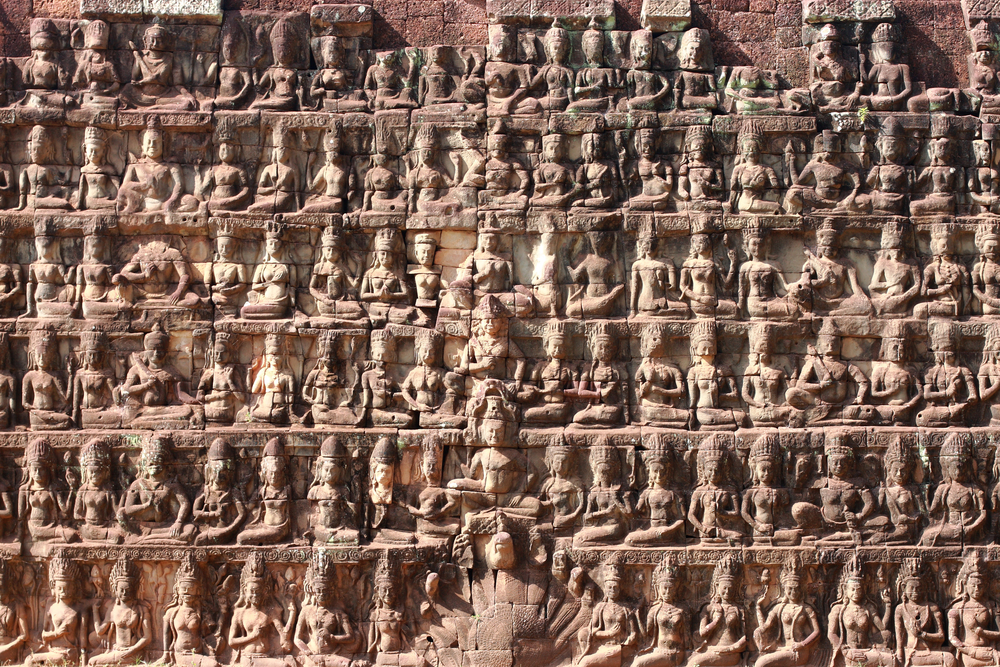 From Phnom Bakheng hill continue south to Angkor Wat B. By any standards, this must be the highlight of any visit to the Angkor region – the great temple is simply unsurpassed by any other monument. Construction of this masterpiece is thought to have begun during the reign of Surayavarman II (1112–52), and to have been completed sometime after his death. Authorities claim that the amount of stone used in creating this massive edifice is about the same as that used in building the Great Pyramid of Cheops in Egypt, though Angkor Wat has many more exposed surfaces, nearly all of which are elaborately carved to a remarkable standard.

Angkor Wat was established as a Hindu temple dedicated to the god Shiva, but it is also thought to have been envisaged as a mausoleum for Surayavarman II. Its orientation is different from that of most temples at Angkor, as the main entrance is from the west rather than the east: this is thought to be related to the association between the setting sun and death. The bas-reliefs – one of the most important elements of the temple – are intended to be viewed from left to right, conforming to Hindu practice.

The sheer scale of Angkor Wat is difficult to grasp in a single visit. The area of land covered by the complex is around 210 hectares (500 acres) and it is surrounded by a moat 200 metres (650ft) wide. Just walking to the central shrine across the moat and along the main causeway is a humbling experience. At the end, the main towers of the temple rise to an astonishing 65 metres (210ft) through three separate levels. At the third level there are five great towers – one at each corner, and the great central spire. These towers are conical, tapering to a lotus-shaped point.

Yet, despite these overwhelming statistics, Angkor is a very human place. Vendors of all kinds of goods, from cold drinks and snacks to the ubiquitous sarongs and krama (Khmer scarves), are everywhere. Cattle wander across the main temple enclosure, while buffalo laze and flick their tails in the broad moats surrounding the complex. 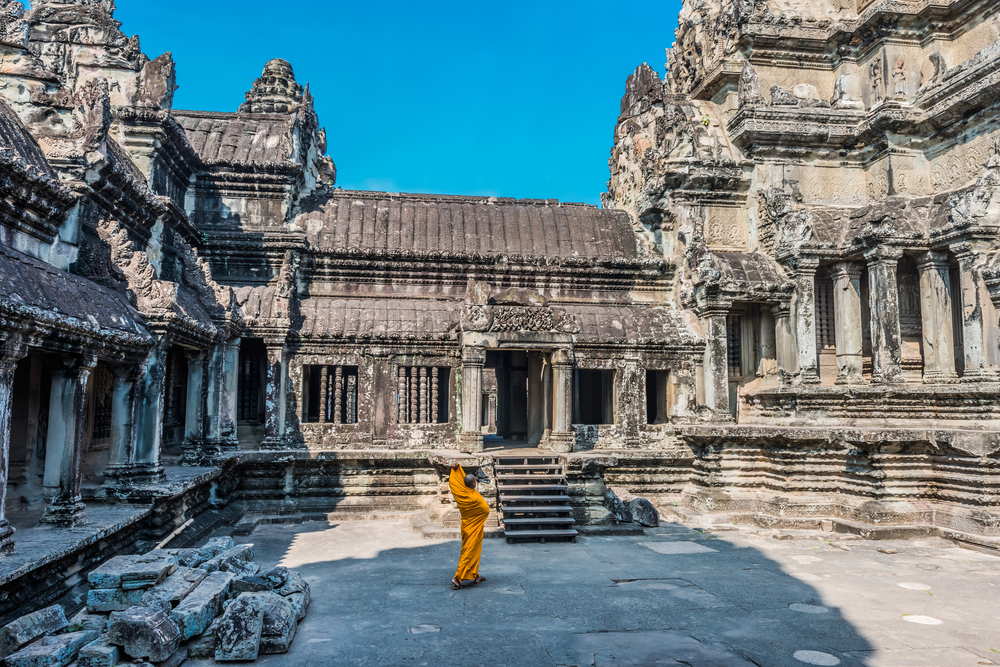 Finally, and ideally towards the end of the day, the route leads past Banteay Kdei for a distance of about 1km (0.6 miles) to reach the spectacular temple of Ta Prohm H, or “Ancestor of Brahma.” This very large complex was, yet again, the work of Jayavarman VII and dedicated to Buddhism. A stone stele, now removed to the Angkor National Museum, tells us quite a lot about it: for example, in its prime, the temple owned 3,140 villages and was maintained by some 79,365 people, including 18 high priests, 2,740 officials, 2,202 assistants and 615 dancers.

Ta Prohm is a long, low complex of buildings all on the same level, with a series of concentric galleries connected by passages that provide shade in the heat of the day. The entire complex is surrounded by a rectangular laterite wall of around 700 metres (2,270ft) in width by 1,000 metres (3,300ft) in length. What makes Ta Prohm so special is that, following an unusual archaeological decision, the jungle has been only partly cut back, so that the buildings are covered with the roots of huge banyan and kapok trees that rise high above the temple. In an otherworldly scene, spectacular writhing limbs bind lintels and crack vaulted passageways, while parrots fly in the upper canopy and break the stillness with their sharp cries. Rather breaking the spell, local children often follow tourists around this part of Angkor, which can be somewhat trying – best advice is to politely appeal to them to leave you in peace.

Ta Prohm was used in the filming of Tomb Raider in 2000. The central courtyard is featured in the scene where Angelina Jolie picks a jasmine flower and is promptly dropped into a deep vault. 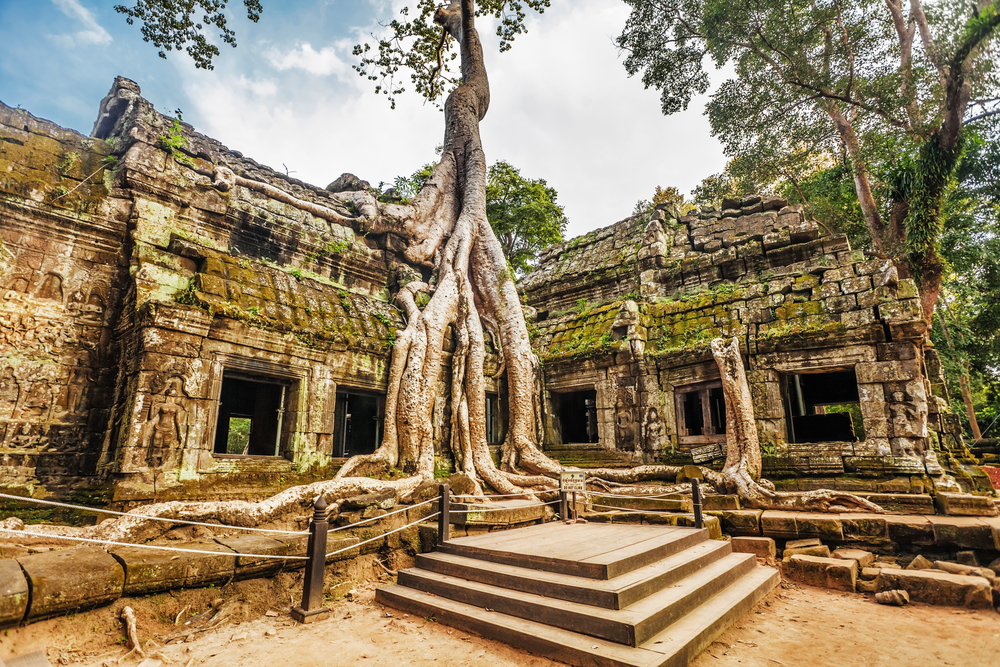 Some 11 centuries ago, King Jayavar­man II (802–50), remembered as the founder of the first unified Khmer state, made his capital at Hariharalaya (“The Dwelling Place of Hari-Hara,” a deity combining the attributes of both Vishnu and Shiva). Today the Roluos complex of temples, which are the oldest in Angkor, marks the site of this first Angkorean capital. Roluos is located to the southeast of the other temples. Founded by King Yasovarman I (889–908), Lolei I was dedicated to the Hindu deity Shiva. Most people come here to see the magnificent carvings and well-preserved stone inscriptions, though the four central brick towers are somewhat tumbledown and covered with shrubbery.

Just to the south stands Preah Ko J, the “Sacred Bull.” Built by King Indravarman I (877–89), it is set amid attractive rural scenery and, being somewhat off the beaten track, is usually tranquil and rarely visited. The main sanctuary consists of six brick towers set on a low laterite platform. A short distance beyond Preah Ko rises the solid mass of Bakong K, a late 9th-century Hindu temple dedicated to Shiva. A thousand years ago, Bakong was the central feature of Hariharalaya. It is built as a temple-mountain on an artificial mound surrounded by a moat and outer enclosure walls. 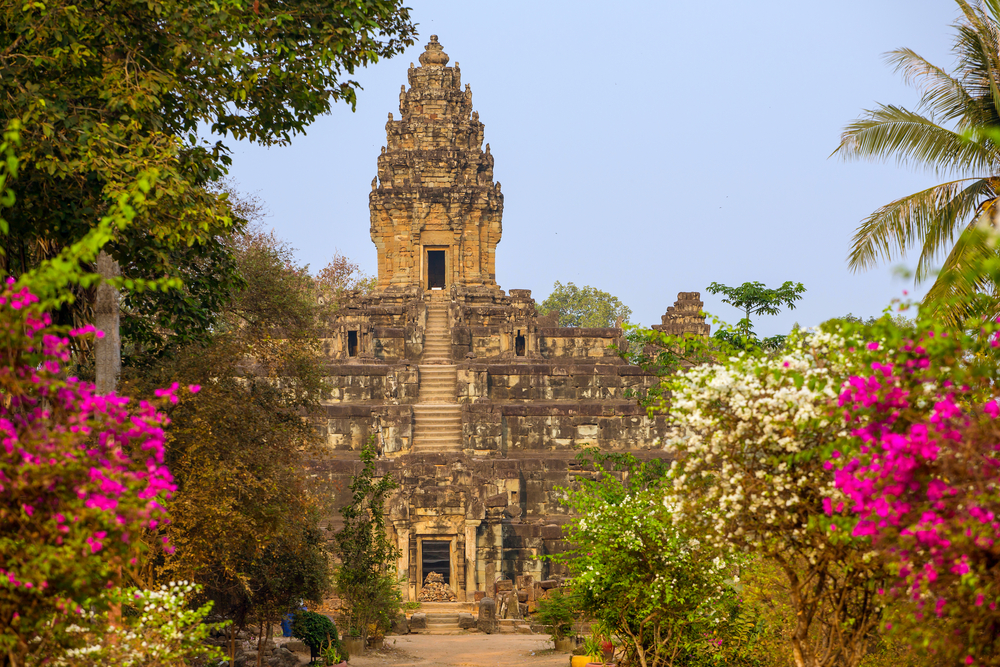 The Angkor complex (all areas) is open daily from 5:30am until 5:30pm. A day ticket costs US$20. Multiple-entry tickets, which require one passport photograph, are available for three days ($40) or seven days ($60). Access to Phnom Kulen costs extra.

Read more: Where to shop: A guide to Phnom Penh's best markets

We wanted to write and commend one of your tour guides - Nina, who has spent to days with us in Bangkok, staying along the river. Nina is the most professional guide, with fantastic knowledge, a great sense of humour and fun and a very generous spirit.... Read more