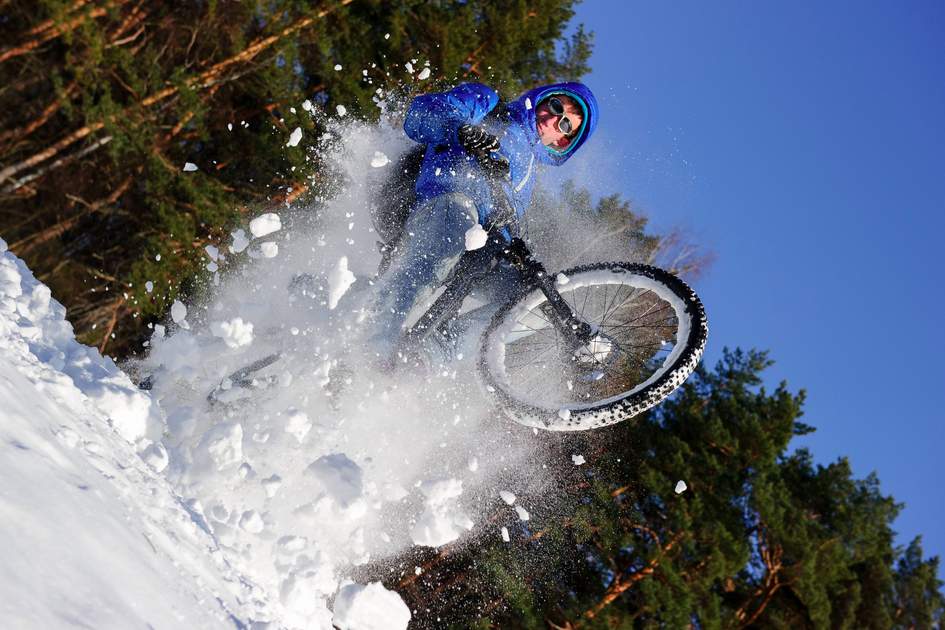 Cyclist riding on a mountain bike in the snow in the winter forest. Photo: Shutterstock

The trend for alternative winter sports is so big in France, many resorts are opening their slopes at night to accommodate them. The possibilities seem infinite, with parks dedicated to tobogganing and freestyle skiing, tracks for walking and snowshoeing, and slopes opened up for organised snowball fights and full moon parties. Here’s our pick of the best alternative ways to hit the slopes.

Each year more and more French ski resorts offer dedicated slopes for sledging, some have even created entire parks, and it’s no wonder, with all the new ways to slide down mountains.

There’s the snowscoot, which is a cross between a bike and a snowboard. Then you have snowtubing, basically sliding down slopes on giant rubber rings. The airboard lets you sledge on an inflatable bodyboard. And snakeglisse is a train of nine small connected sleds led by an instructor.

If all that sounds too tame, try bobsledding on the Olympic track in La Plagne, where you can hit a 90-degree bend at up to 120kmph, while pulling 3Gs. Put extreme sledging to the test this winter and stay at Hotel Le Cocoon in Plagne 1800.

Get behind the scenes in La Rosiére

Several French ski resorts now allow you to join their workers as they open and close slopes, start up the lifts and smooth out the runs. Keen off-piste skiers and boarders can even train in avalanche rescue so they know how to properly use their avalanche victim detector machines.

La Rosiére goes one better with their Backstage Week each December, when visitors can help set up the resort ahead of the winter season, doing everything from setting up the slopes to taking part in rescue exercises and learning how to wax skis. If all hands on slopes sounds like your thing, stay at TERRESENS - Le Hameau de Barthélémy in La Rosiére.

Skijoering: skiing behind a horse

Dog-sledding is so popular in France that a special school, Ecole Française de Mushing, has been set up to train instructors. But for wackier alternative winter sports, try skijoering, where skiers are pulled along by a horse or dogs on a track or slalom course.

Try skijoering in Les Arcs or Alpe d’Huez and think about staying at Hotel Autantic in Bourg-Saint-Maurice close to Les Arcs and the legendary Paradiski area.

To go ice-diving, you don’t even have to be PADI certified! You just have to be at least 150cm in height so you can fit into the special 7mm-thick dry suit that you’ll wear when you’re lowered into a hole in the frozen lake.

This adventure takes you on an underwater tour where you can see magical blue, green and yellow lights shining through bubbles in the different sculptural forms of the ice above you, which can be up to 3m-thick.

Dive Xtrême is only 30 minutes drive from Grenoble, so if you want to try ice-diving this winter and explore the largest city in the French Alps, Maison Barbillon Grenoble is the ideal base for both adventures.

Get on your bike

Several resorts, including Les Menuires in France, have dedicated mountain-biking tracks, where you can slide at up to 60km/h. So mountain biking now joins motorcycling, trail-running and even golf - played with brightly-coloured balls - on the list of sports which have now been adapted to snow.

Ready to take a trip to France?

Our local experts can plan incredible trips to France for you. To get started, simply get in touch letting us know your ideas for the trip and when you want to travel. We will then create a personalised itinerary which you can amend to your own specifications. Browse existing itineraries for inspiration. All our itineraries can be fully tailored to suit your needs.

Great food and walking tour. Bread, cheese, and wine in Paris. There are worse ways to spend a morning.

We saw so much of a part of Paris we probably would not have visited and thoroughly enjoyed. As promised, our agent keyed the tour around the many movies filmed in the area, while giving us history and interesting facts. The beautiful views and lovely parks and housing as we worked our way up the hill were delightful. All six of us agreed it was a very worthwhile tour.