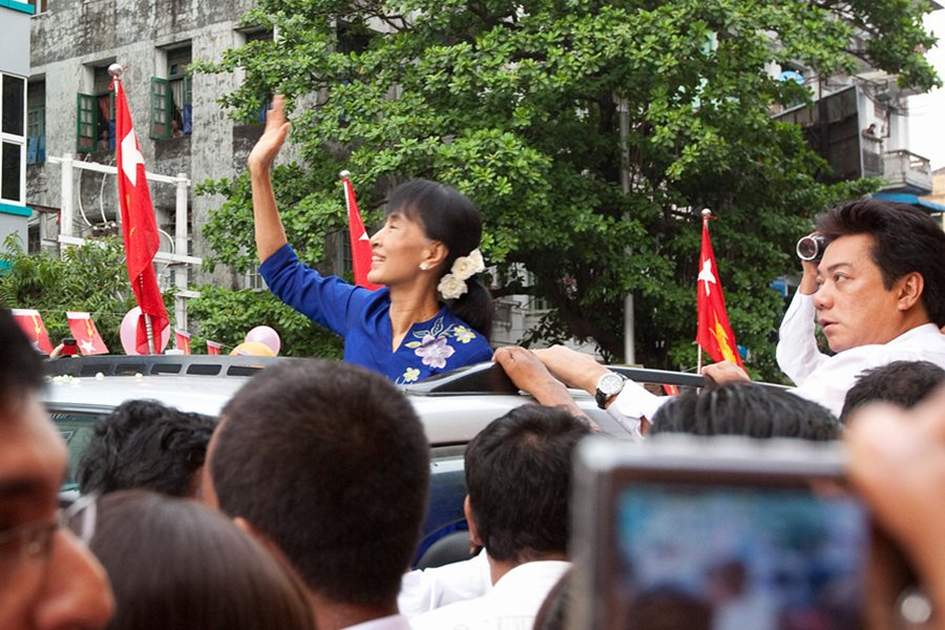 As part of our exploration of April's destination of the month, Myanmar, we take a look at the country's iconic Leader of the Opposition, Aung San Suu Kyi.

Also known by her supporters as “The Lady”, Aung San Suu Kyi has come to be seen both in Myanmar and abroad as a symbol of implacable but peaceful resistance to military oppression.

Born in 1945, Aung San Suu Kyi is the daughter of the late Burmese nationalist leader, General Aung San, whose resistance to British colonial rule culminated in  independence in 1948. After attending school in Yangon, Suu Kyi lived in India before going to Britain for her higher education. There she met and married her late husband, Michael Aris, an Oxford University professor specialising in Tibetan Studies. Aris accepted that his wife’s destiny might ultimately lie in Myanmar. “Before we were married I promised my wife that I would never stand between her and her country,” he said.

Suu Kyi first came to prominence when she returned home in August 1988 to visit her ailing mother. She became the leader of a burgeoning pro-democracy movement in the aftermath of the brutal repression of the uprising. Inspired by the non-violent campaign of Mahatma Gandhi, Suu Kyi organised rallies and travelled the country, calling for peaceful democratic reforms and free elections. The movement quickly grew into a political party, the National League for Democracy (NLD), which went on to win 51 percent of the national vote and 81 percent of seats in parliament, by which time she had already been under house arrest for a year. The military regime, however, refused to relinquish power and stepped up intensified repression of the NLD.

Aung San Suu Kyi spent 15 of the next 21 years under house arrest, restricted in her movements and slandered by the pro-government media as a political opportunist and even a “genocidal prostitute”. This last unlikely phrase derived from the military regime’s obsession with her marriage to Michael Aris, who died of prostate cancer in Oxford in 1999 at the age of 53. Throughout Aris’s final illness, the Yangon authorities denied him permission to visit Myanmar. Fearing that she would not be allowed to re-enter the country, however, Suu Kyi declined the option of leaving and remained separated from her husband and two sons at the time of his death.

Finally, decades of international pressure and sanctions bore fruit on 13 November 2010, when the woman regarded by most of the world as Myanmar’s leader-in-waiting was released “for good conduct” from her Yangon home. The end of her detention came only six days after a widely criticised national election.

For most of the following year, the NLD leader campaigned for her party in the run-up to a key by-election in which her party won 43 of the 45 seats it was allowed to contest. In its wake, Aung San Suu Kyi took her seat in the Pyithu Hluttaw, the lower house of Myanmar’s parliament, for the first time, and met with US Secretary of State, Hillary Clinton. The event signalled the start of what most impartial observers hope will be full rehabilitation into political life. Whether the perennially paranoid, corrupt and megalomaniac military government will allow the NLD to dominate the country’s political life remains to be seen.

On 16th June 2012, Suu Kyi was finally able to accept the Nobel Peace Prize she had been awarded two decades earlier. She also met with Barack Obama last year and was able to receive the United States Congressional Gold Medal she had been awarded in 2008, whilst under house arrest.

Below is a picture of crowds reacting to an appearance by Suu Kyi in Myanmar last year. 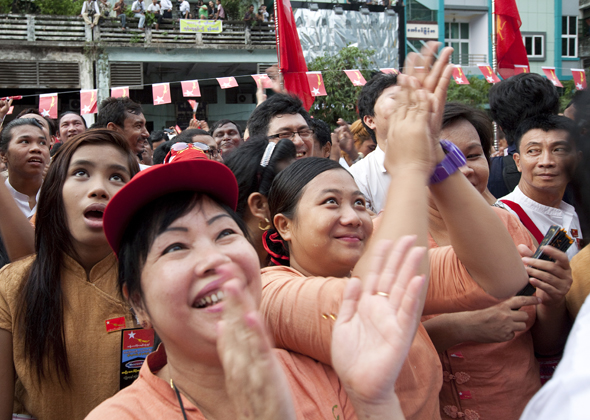 Plan your trip to Burma

To read the full lowdown on where to go and what to do in Burma, buy our brand-new Insight Guide to Burma.

This April we're exploring Burma as our destination of the month. For more updates keep following the Insight blog, or check us out on Twitter @InsightGuides or on our Insight Facebook page, or why not look at some lovely travel photography on Pinterest.

As it was my first visit to Myanmar and I had only a few days, I wanted a customised experience rather than the usual package tour. Backyard Travel responded to my queries, took note of my interest and put together a fantastic itinerary. None of this... Read more

Good interaction with to prepare the trip and to modify the program with good services during the travel. Good equation between quality and price.