The landscape of the Southeast Asian country of Myanmar is peppered with dazzling pagodas, shrines and stupas – a lasting legacy of the country's Buddhist merit-making traditions. Here is our guide to where to visit the top 10 Buddhist monuments in Myanmar. 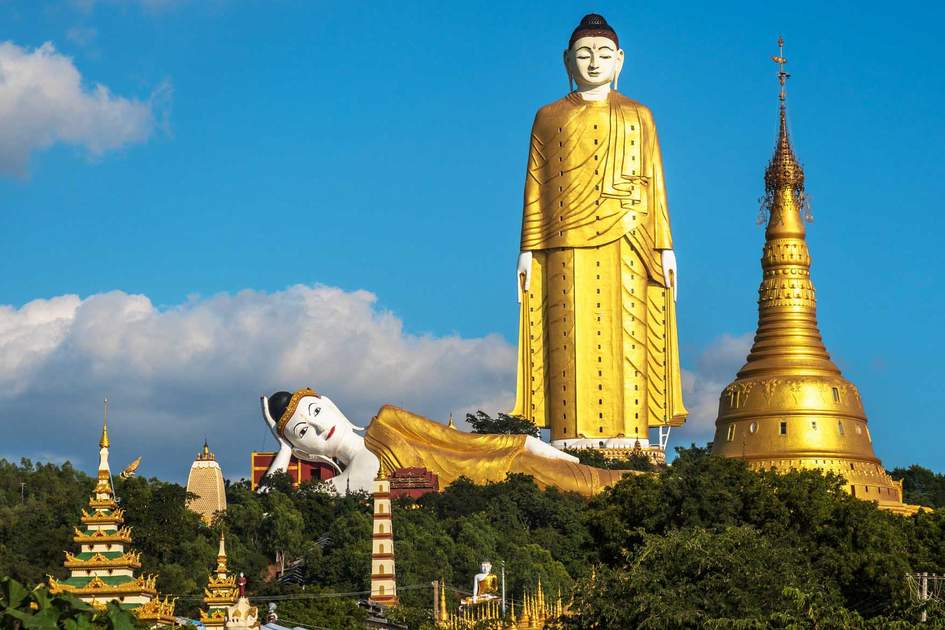 Myanmar is home to a wide range of incredible Buddhist architectural styles. This is primarily due to the eclectic nature of Burmese Theravada Buddhism, which incorporates elements from a range of sources. Here's how to see the best examples in the country for yourself.

The sheer number of Buddhist structures dotted across the country leaves a lasting impression on visitors. Many Burmese Buddhist monuments are exquisitely beautiful. All reflect the legacy of Burma's Buddhist merit-making tradition. Building temples, shrines or stupas is seen as a way of improving rebirth conditions and compensating for transgressions committed in the present life. In addition, raising funds for a pagoda to be built earns the sponsor respect and status in the current life.

Thousands of pilgrims stream daily around the precincts of Myanmar's most splendid religious monument – Shwedagon Pagoda – a structure of otherworldly beauty. The temple here is often seen as a symbol of Burmese Buddhism and national pride. The gigantic golden stupa rises out from the cityscape of Yangon making for a sublime spectacle.

It is tempting when you first arrive in Yangon to head straight for the mesmirising gilded spire on the horizon. If you can, resist the urge until early evening when the warm light of sunset transforms the gold-encrusted pagoda and its many smaller shrines. Surprisingly, you'll also find fewer tourists during the early evening, and so will share the site primarily with local worshippers.

The complex can be entered through four different gateways, each approached via elegant flights of covered steps. Whichever stairway you use, be sure to remove your footwear at the bottom of the steps, and remember which one you entered through. 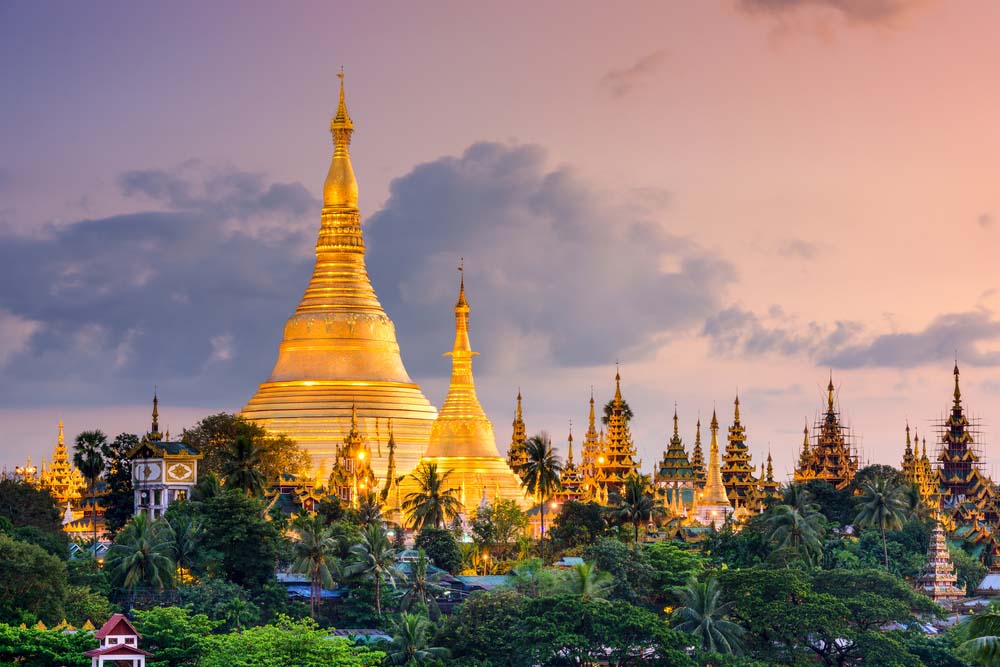 Not really a pagoda in the traditional sense, the Kyauk Htat Gyi is actually a tazaung (pavilion) housing a colossal reclining Buddha. Although the 70-metre long sculpture is bigger than the reclining Buddha of Bago (see below), it is not as well known or as highly venerated. Nevertheless, it is a truly impressive sight. This Buddha is highly decorated too, with coloured lips and eyes, as well as exaggerated earlobes. The pagoda enclosure also houses a centre devoted to the study of sacred manuscripts. The 600 monks who live in the monastery annex spend their days meditating and studying old Pali texts.

Bago's outstanding attraction is the Shwemawdaw Pagoda. Its stupa can be seen from around 10km (6 miles) outside the city. Richly gilded from base to tip, the pagoda has many similarities to the Shwedagon, and is in fact even taller than its more famous cousin, standing at 114 metres high. In 1930, the Shwemawdaw was hit by three earthquakes that almost completely destroyed it. However, after World War II, it was rebuilt by unpaid volunteers to stand higher than ever.

Like Yangon's Shwedagon, the Shwemawdaw's main terrace can be approached from four different directions by covered stairways. There are not as many brightly coloured tazaung or zayat (resting places) here, but there is a small museum containing some ancient wooden and bronze Buddha figures salvaged from the ruins of the 1930 earthquake.

Marvel at the pagoda's full height in person as part of Insight Guides' Myanmar Highlights trip.

On the other side of Bago lies the Shwethalyaung Buddha. Said to depict Gautama on the eve of his entering nibbana (nirvana), the reclining Buddha is revered throughout Myanmar as the country's most beautiful. Measuring 55 metres long and 16 metres high, it is not as large as Yangon's more recent Kyaukhtatgyi, but as a result of its quality and long history, is much the better-known and loved of the two. 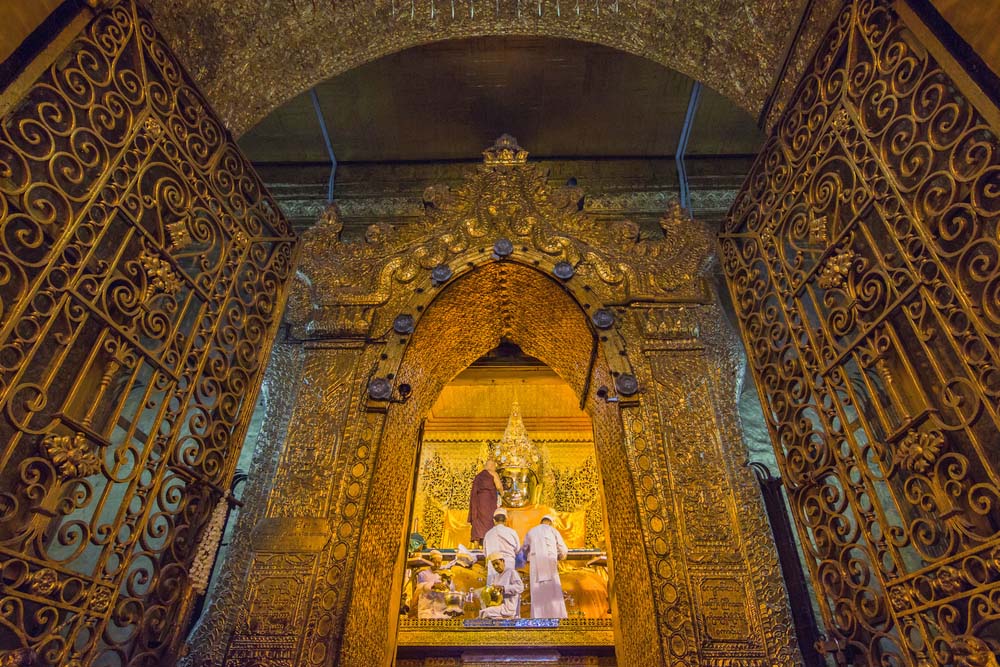 Lying 3km (2 miles) south of Mandalay city centre, the Maha Muni Pagoda is the most revered Buddhist shrine in Mandalay, thanks to the presence in its central chamber of a magnificent gold Buddha image – the eponymous 'Maha Muni' or 'Great Sage'. Revered by pilgrims from all over the world, it is believed to have been one of only five likenesses of the Enlightened One made during his lifetime. However, historical evidence suggests the statue was probably cast in 146AD, five or more centuries after the Buddha's death.

A striking feature of the image's body, rising to 3.8 metres in height, is its covering of pounded gold. So many leaves here have been pressed on to it as offerings that they now form a 15cm-thick layer extending all the way around the back. The Buddha's face always retains its gleam, as it is polished lovingly twice each day at 4.30am and 4pm by the monks.

Among the most surreal sights in Southeast Asia are the two vast Buddhas – one standing, one reclined – on this hilltop to the east of Monywa. The first is a vast, 116-metre standing Buddha – the Laykyun Setkyar – said to be the second biggest of its kind in the world. Stairways twist through 16 storeys inside the colossus, enabling visitors to climb through a series of galleries depicting lurid scenes of demons torturing human souls. The corridors lead to various windows from which visitors can survey the entire site.

At the foot of the standing giant sprawls an equally huge reclining Buddha, measuring 95 metres from head to toe. Tens of thousands of smaller Buddha statues rest in neat rows under Bodhi trees radiating from the 131-metre Aung Setykar Pagoda, on flat ground at the bottom of the complex. 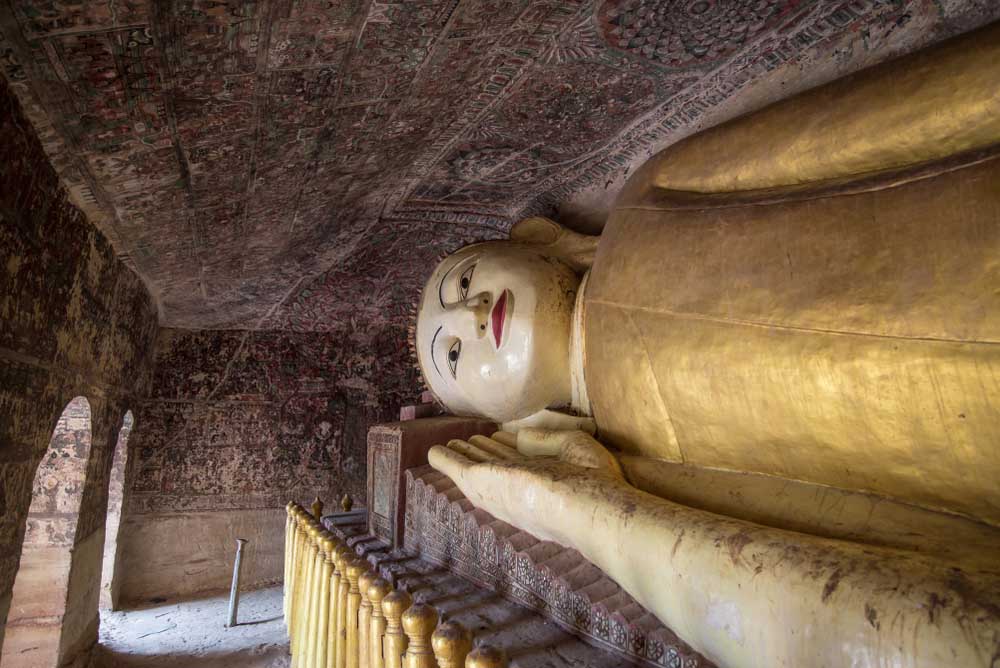 To the west of Monywa, the Pho Win Taung cave complex consists of a cluster of 492 prayer chambers hewn from three sandstone outcrops. Most were excavated between the 14th and 18th centuries, but with their peeling plaster murals and time-worn Buddha images they feel much older, like an apparition from the Central Asian silk route.

If you're making the trip here, you'll need a decent torch to admire the caves' decorated interiors. Some were elaborately painted in geometric designs rendered in earthy reds, browns and blues. Others lead to colonnaded walkways lined with meditating or reclining Buddhas. The fact that the site lies well off-the-beaten-track adds to its allure as one of the best Buddhist sites in Myanmar. Be prepared for a complete lack of facilities, as well as troupes of pilfering monkeys.

The Shwezigon Pagoda, found within the more built-up Nyuang U area of Bagan, ranks among Myanmar's most revered Buddhist shrines. The prototype for all Burmese stupas, it was built after the rule of Anawratha at a spot designated by a white elephant to house the empire's most sacred relics. Visit in the early evening when the sun is beginning to set. If you time it right, you'll see the last of the day's sun radiating against the stupa's golden decoration, before turning it a glowing red colour. The site is often relatively tourist-free at this time too. 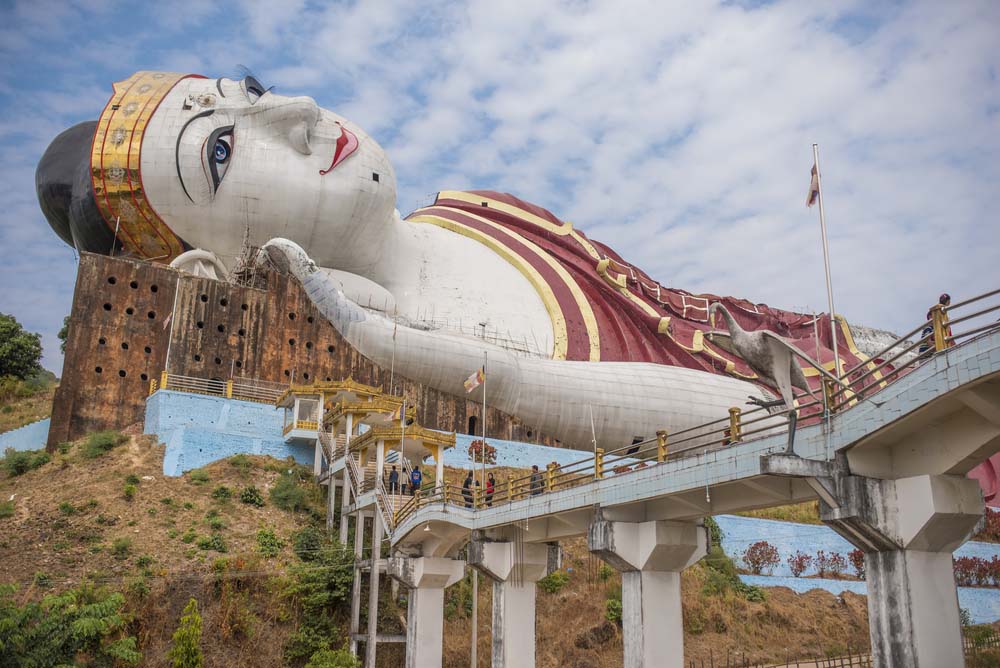 The country’s largest reclining Buddha, measuring an enormous 180 metres long, rests on a ridgetop 20km (12 miles) south of the former colonial capital of Mawlamyine (Moulmein). The statue is also the largest of its kind in the world and houses diorama galleries, which recount moral tales and stories from the Master’s life.

Forming one of the most ethereal spectacles in Southeast Asia, the Kyaiktiyo 'Golden Rock' Pagoda crowns a ridge of forested hills in the far north of Mon State, 210km (130km) east of Yangon. During the pilgrimage season from November to March, tens of thousands of devotees climb daily up to the shrine, regarded as one of the country's most sacred, for a glimpse of a modest, 7.3-metre stupa mounted on top of a lavishly gilded boulder.

The hour-long climb to the hilltop temple can be arduous in the heat, and the journey to and from the starting point of the walk in an open-topped truck is less than comfortable. But the effort is rewarded with the chance to see the magical boulder bathed in the delicate, rose-coloured light of dawn or the afterglow of sunset, when crowds of ecstatic pilgrims and monks illuminate flickering candles and incense sticks as offerings. 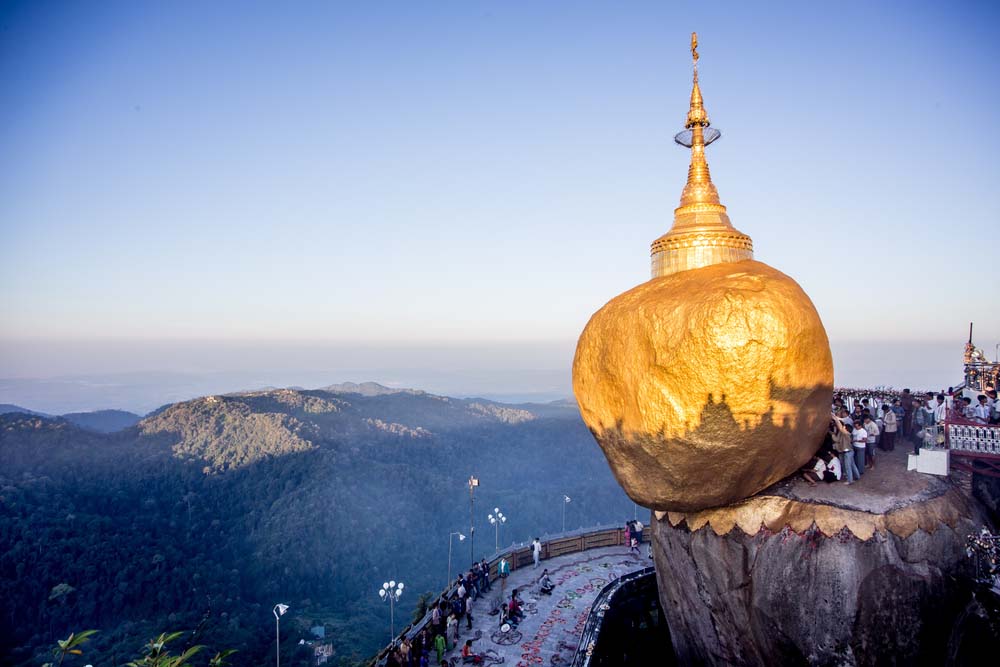 Ready to visit the best Buddhist sites in Myanmar?

Insight Guides' local experts can help you plan and book your trip to Myanmar. Get in touch and let us know your interests and travel preferences. We will then create an itinerary especially for you, which can be amended until you're happy with every detail before booking. Take inspiration from our existing itineraries, and keep in mind that they can all be fully customised.

We've been tremendously happy with our trip so far and you dealt with all problems quickly and smoothly. Very much appreciated! Btw our stay at Coral Redang was exquisite. I wish I never had to leave that beach.