The North African nation of Morocco is synonymous with buzzing cities, vibrant souks and verdant mountains. However, the country’s Atlantic coast also offers charming seaside towns and numerous idyllic stretches of golden sands. Here is our guide to the best beaches in Morocco. 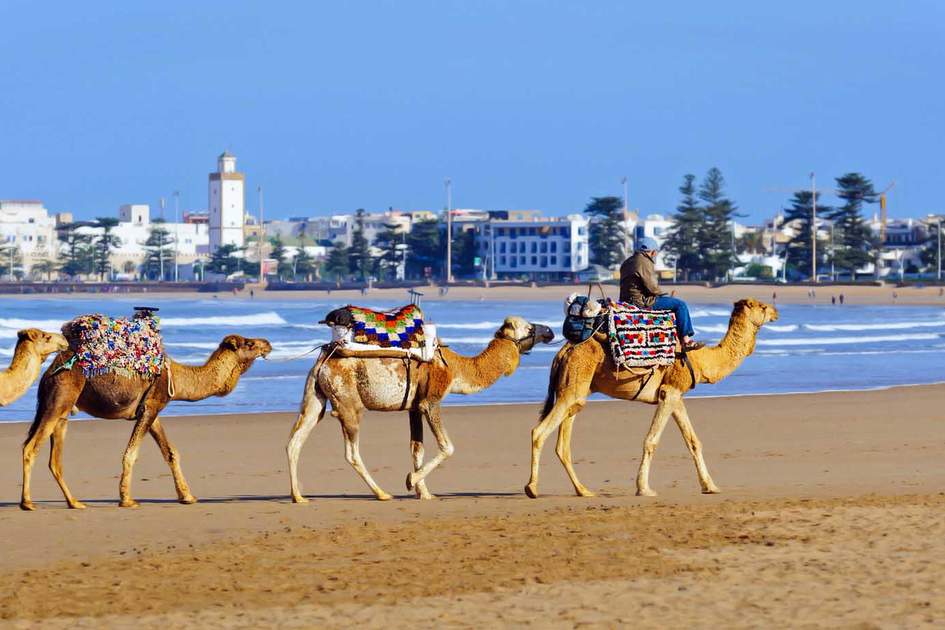 Camels at Essaouria, one of the best beaches in Morocco. Photo: Shutterstock
PrevNext

The windswept, fortified and whitewashed coastal town of Essaouira has long been a magnet for travelers, musicians and those seeking an escape from the hurried pace of life in other Moroccan towns. Jimi Hendrix stayed here for a few weeks in 1969, as did Bob Marley a year or so later, when the town provided a countercultural haven for hippies. However, despite its enduring popularity over the years, Essaouira remains amazingly unaffected. The peaceful medina – a Unesco World Heritage Site – is entirely pedestrianized and the souks are a joy to explore.

Essaouira’s endless expanse of pristine Atlantic beach stretches south towards the village of Diabat, a mecca for surfers, kite surfers and windsurfers. Along Boulevard Mohammed V, which runs from the medina to the end of the beach, you will find the ION Club, where surfboards, kites and windsurfing equipment are available to rent. At the far end of Essaouira’s beach lies Diabat, a sleepy jumble of whitewashed houses. Further along the coast, narrow roads lead to what the locals call the plages sauvages (wild beaches). These long expanses of white sand, backed by dunes fringed with prickly gorse and argan trees, stretch out into thin mists disappearing in the distance.

With its whitewashed houses tumbling over seven hills into the Straits of Gibraltar and the Mediterranean, and Spain just 14km (9 miles) away, Tangier rests at the most northwestern tip of Morocco, and Africa. It has for millennia been a vital crossroads – between East and West, Africa and Europe, the Atlantic and the Mediterranean – and has consequently adopted an eclectic and unique set of influences and styles. An enduringly popular hangout for artists and writers, Tangier is one of Morocco’s best-loved cities, with a charming medina, an elegant corniche and some wonderful beaches nearby. To the east lie the beaches of the calm Mediterranean, while to the west, long stretches of the Atlantic coast can be found.

Tangier’s town beach is a vibrant location, particularly in summer when it is thronged with Moroccans escaping the heat of Marrakech and Fez. Lined with breezy beach bars, it is a destination with artistic associations. Creative souls from Tennessee Williams and Joe Orton to Edgar Burroughs and The Rolling Stones have in the past frequented venues such as the Atlas Bar and the Tangerinn. To the west of Tangier, the lovely headland of Cap Spartel offers quieter alternatives to Tangier’s well-populated sands and, if the wind is blowing in from the east, more sheltered conditions for sunbathing. Be warned though, that the strong currents here can be dangerous. 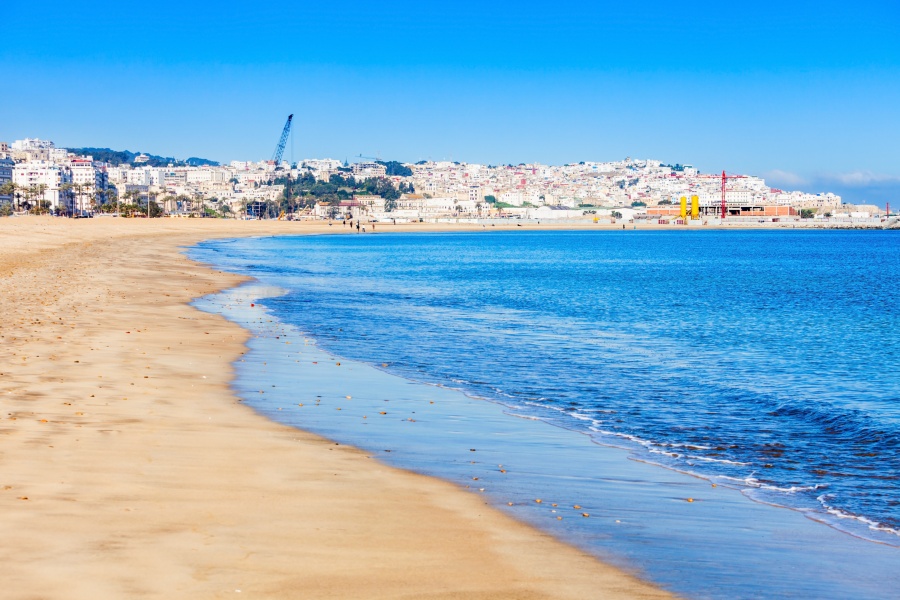 A magnificent bay, year-round high temperatures and a wide choice of hotels make Agadir Morocco’s top beach resort. It attracts thousands of international visitors every year and looks more like a location on the Spanish Costa del Sol than a Moroccan resort. Following a destructive earthquake in the 1960s, the city was rebuilt around a modern grid system and subsequently developed into Morocco’s most important port and the country’s leading destination for visitors. Yet, despite its modernity and lack of historic monuments, Agadir is still an enjoyable city to visit, and an ideal base from which to venture into Morocco's deep south.

The city’s prime attraction is its 10km (6-mile) -long stretch of golden sands. Enhanced by around 300 days of sunshine each year it is certainly one of the best beaches in Morocco. In summer, Agadir is cooler than the country’s interior, while the winter climate is often sunny and mild. The beach is huge and impeccably clean, while its promenade is lined with hotels, bars and restaurants. In the center of the bay, a ridge of rocks, which is exposed at low tide, shelters much of the beach from Atlantic breakers and makes for safe swimming most of the time – flags warn bathers of dangerous conditions should they arise. 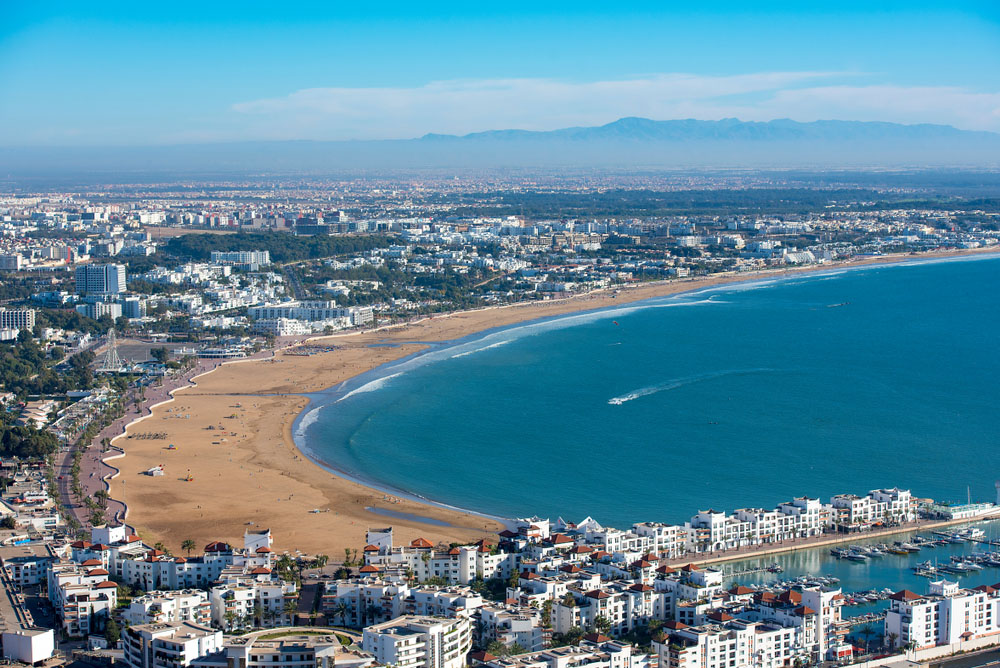 Agadir and its beach bathed in summer sunshine. Photo: Shutterstock

Located between Casablanca and Essaouira, the pretty resort town of Oualidia is known for its oyster beds and popular for its calm, crescent-shaped lagoon. The resort area by the lagoon is home to a number of good hotels, most of which have excellent fish restaurants. The upmarket La Sultana Oualidia hotel offers luxurious accommodation and its own private beach.

As the most popular beach resort south of Casablanca for Moroccans, Oualidia is often busy during the summer, especially at weekends. Boats can be hired to cross the lagoon and visit less crowded beaches on the other side of the bay. Several secluded sandy coves can be reached by driving north out of town and over a sandy track to a long spit of land that separates the lagoon from the ocean. 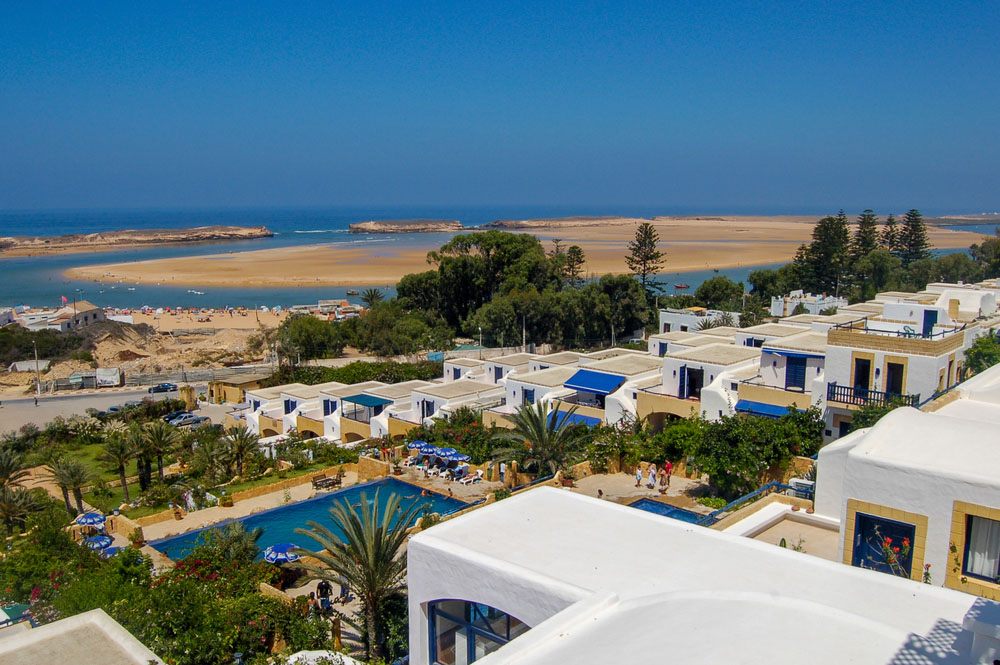 Bounded by beautiful Atlantic beaches, the port city of El Jadida was held by the Portuguese for 250 years, during which time they constructed a fortified and moated medina, which survives largely intact. Now protected as a Unesco World Heritage Site, this area – known as the Cité Portugaise – retains its original cobbled streets and distinctively Portuguese architecture.

El Jadida is currently in the throes of rapid change. Many properties in the Cité Portugaise have been renovated by wealthy Moroccans and foreigners. Major investment is also pouring into the five-star resort of Mazagan, just north of El Jadida. A beautiful stretch of beach has been developed which is home to the Pullman Mazagan Royal Golf & Spa resort hotel, complete with a casino and its own world-class golf course.

The whitewashed town of Asilah, south of Tangier, is known for its charming painted houses, fish restaurants and vibrant annual arts festival. The beautiful medina, sheltered by 15th-century sea-facing ramparts, has been fully restored and is home to hundreds of sparkling white houses with doors and shutters painted in shades of blue. A string of relaxed hotels and holiday complexes lie to the north of the town, while a 20-minute drive south of the Old Town lies Paradise Beach, the place to head for when you feel like soaking up the sun while looking out over the Atlantic Ocean. 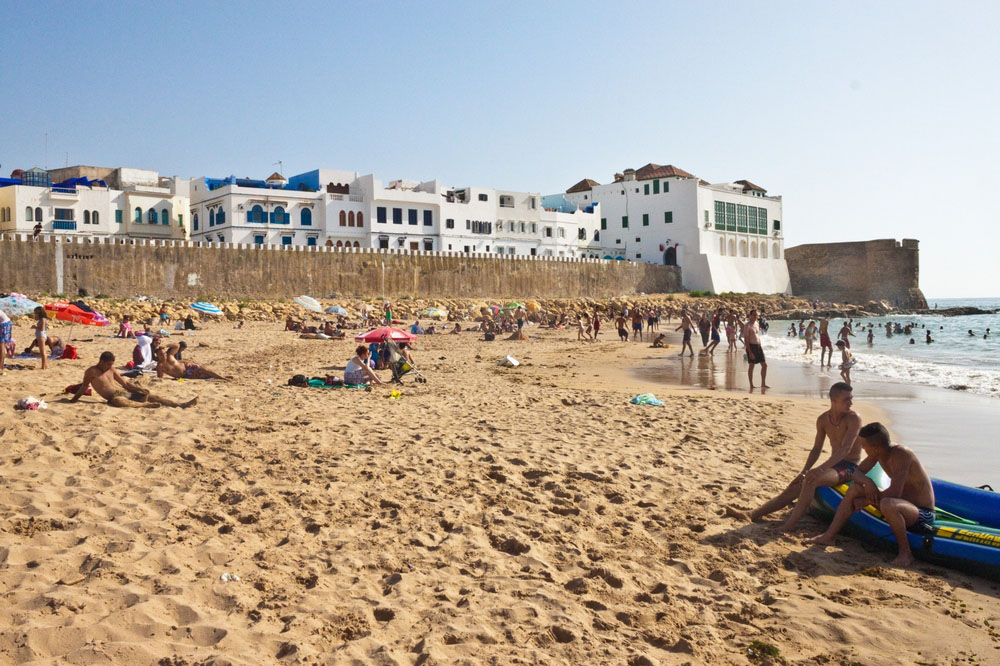 Asilah is a fortified town on the northwest tip of the Atlantic coast of Morocco. Photo: Shutterstock

Ready to take a trip to Morocco?

Insight Guides can help you plan and book fantastic trips in Morocco. Simply get in touch to let us know when you would like to travel and to share your ideas for the trip. Local travel experts will then create a personalized itinerary especially, which you can amend until it is exactly how you want it before booking. Browse our existing itineraries for inspiration, and keep in mind that they can all be tailored to suit your specific requirements.

My wife and I just completed an 8 day tour in Morocco. The overall itinerary was developed in conjunction with the planning staff, mixing some of our interests and ideas along with their expertise and logistics. We had a driver and guide with us all week,... Read more