The best cities to visit in Morocco

The enigmatic and beautiful country of Morocco has lured foreign visitors for millennia, and remains one of Africa’s most-visited nations. Home to metropolises built around laid-back beaches, soaring mountains and bustling souks, here is our guide to the best cities to visit in Morocco. 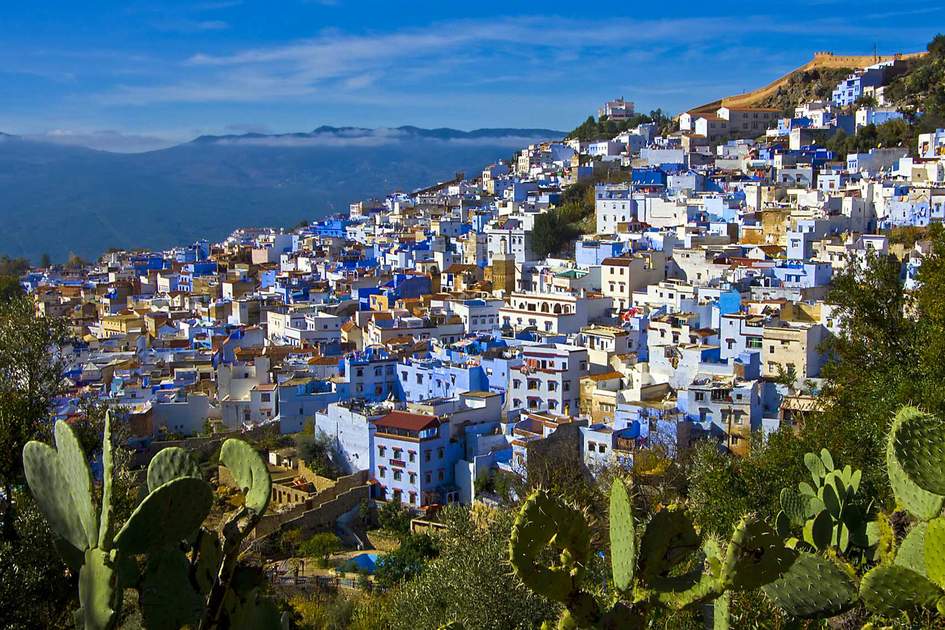 Chefchaouen, a vibrant arts and crafts hub, and one of the best cities to visit in Morocco. Photo: Shutterstock

Both African and Arab, eastern and western, Marrakech is an eclectic meeting place of different cultures and the country’s most vibrant metropolis. One of Morocco’s four imperial cities, Marrakech is nestled in the shadow of the Atlas Mountain range. Perhaps most famous for its medieval medina, a UNESCO-protected maze of alleys and markets, the city is also known for its iconic 12th-century Koutoubia Mosque, with a single minaret that can be seen for miles around. For some, part of the fun of visiting Marrakech is getting lost. If this is you, embrace the chaos as you wander the souks of the medina in one of the best cities to visit in Morocco.

The cultural soul of Marrakech for 1,000 years, Jemaa el-Fna square comes alive each evening at sunset.  Locals and visitors congregate to see the acrobats, magicians, fortune-tellers, snake charmers, Gnaoua musicians, and storytellers that together create a wonderful open-air spectacle. The city’s Moorish traditions and artistic heritage are complemented by a burgeoning contemporary creative pulse. This has led to Marrakech being designated as the African Capital of Culture 2020. Museums and galleries including the Museum of African Contemporary Art Al Maaden, the Museum of Photography, and the Yves Saint-Laurent Museum are hosting events throughout the year. There is even more to discover in the cultural scene of Marrakech during 2020. 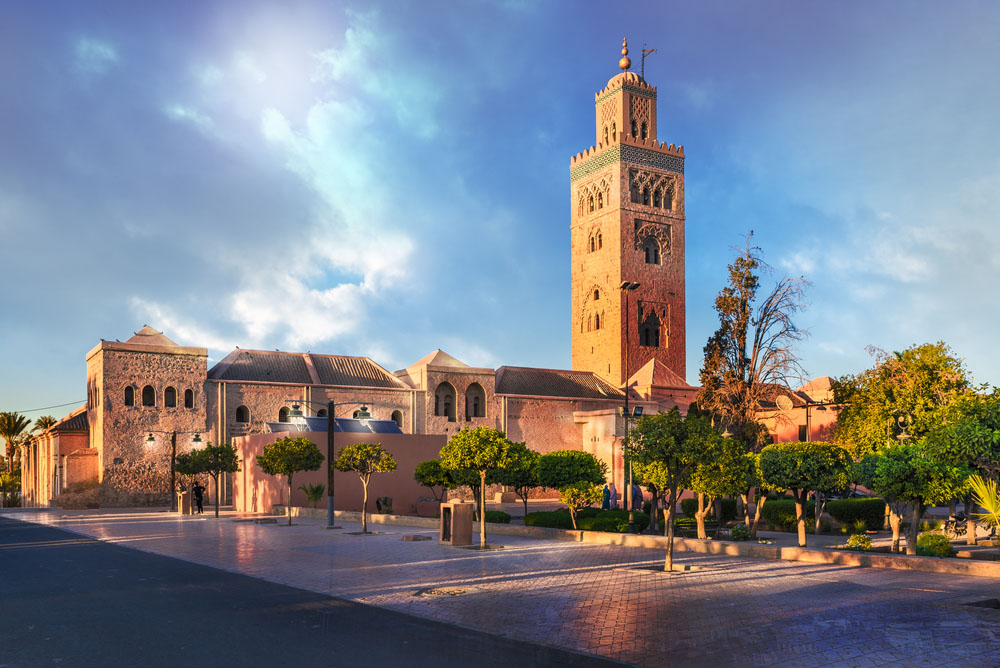 The smallest of Morocco’s four imperial cities, Meknes offers a fascinating snapshot of the megalomaniacal rule of the extravagant Sultan Moulay Ismail. This scenic hilltop city is set in the heart of Morocco’s premier wine-producing region and makes the perfect base for day trips to the nearby Roman remains of Volubilis and the holy town of Moulay Idriss.

Moulay Ismail ruled Morocco from Meknes with an iron first from 1672–1727. During this time, the city, surrounded by fertile ground and good trade routes, prospered. Ismail built a complex defensive system, comprised of impressive fortifications that have stood the test of time. Home to its own UNESCO-declared medina to rival Marrakech's, the beautiful Bab Mansour gate and the mausoleum of Moulay Ismail, Meknes makes an excellent choice for those looking to get off the beaten track in Morocco. 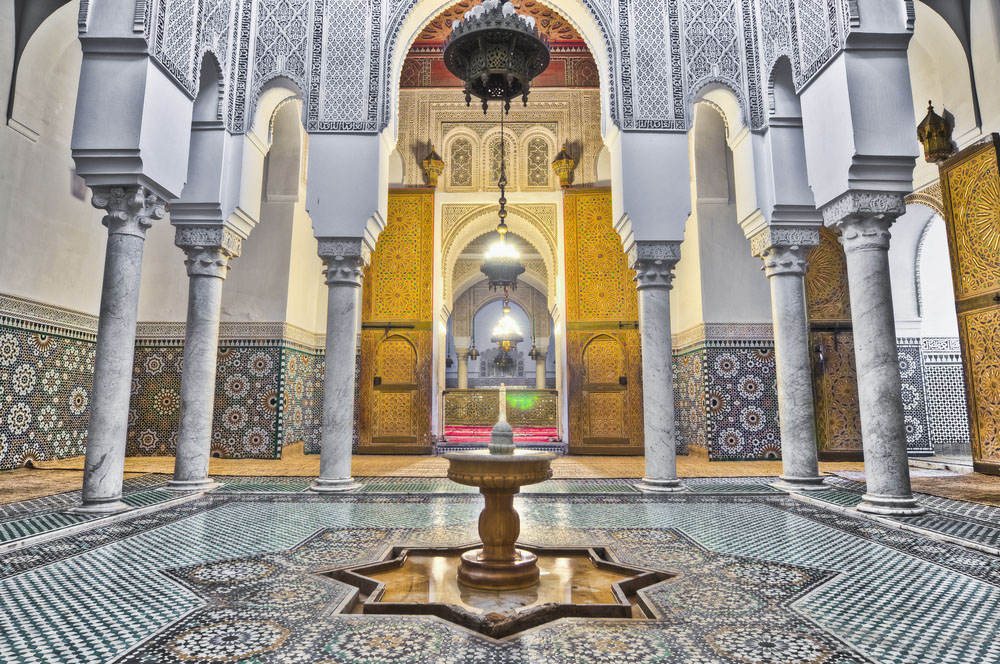 The ornate interior of the mausoleum of Moulay Ismail, Meknes, Morocco. Photo: Shutterstock

One of the oldest and most historic settlements in North Africa, Fez is another of Morocco’s imperial cities and its former capital. Interestingly, Fez is thought to be home to the world’s oldest university, which was established in AD 859, together with one of the largest mosques outside of Mecca and Medina. This city is a melting pot of cultures, with its significant Arab and Berber populations having been bolstered significantly by refugees from Spain and Tunisia.

Step back in time to the Old City of El Bali, a mysterious, golden-hued labyrinth of medieval markets, palaces and mosques. Many of the crafts and trades that are the lifeblood of El Bali’s narrow streets have barely changed in 1,000 years. 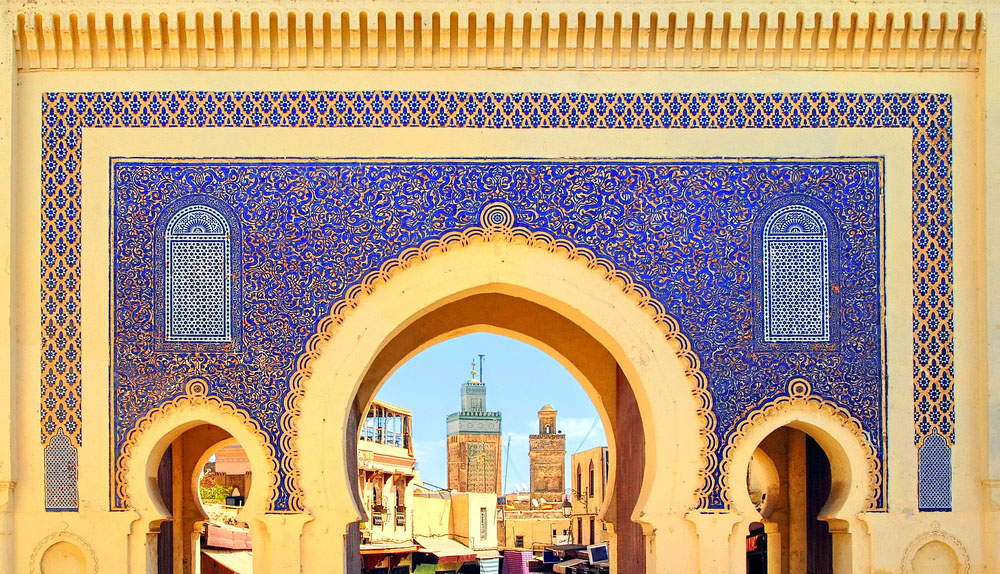 Nestled amongst the peaks of the Rif Mountains, the blue-washed city of Chefchaouen is a vibrant arts and crafts hub with a relaxed atmosphere. Many of the locals here speak Spanish, unlike the rest of the country, where Arabic and French are most widely spoken. There are several theories as to why the buildings in Chefchaouen are painted blue. Some believe this trend began when an influx of Jewish immigrants fleeing the Spanish Inquisition arrived; blue represents divinity in Judaism, as it is the color of the sea and the sky. Others believe that the color blue keeps away flies and mosquitos. Whatever the reason, this picturesque city facilitates a slower pace of life, and is certainly one of the best cities to visit in Morocco.

Discover the medina and sous of Chefchaouen on Insight Guides Morocco: On Hannibal's Trail trip. 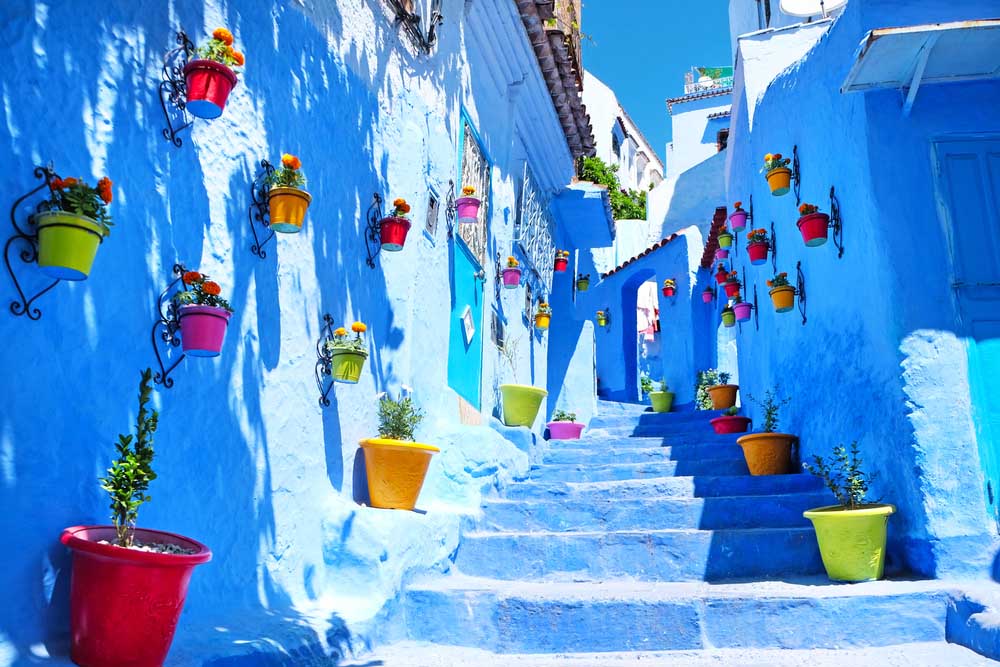 The city of Tangier is one of Morocco’s best loved, and has long been a magnet for an eclectic crowd, ranging from artists and writers to international spies. Located at the northernmost point of Morocco – and indeed Africa – Spain is just 9 miles (14km) away from Tangier. Unsurprisingly, the city has been a vital crossroads in trading routes for millennia, with plenty of cultures leaving their mark, particularly on the Medina. More recently, artists, writers and musicians such as Henri Matisse, Jack Kerouac and the Rolling Stones have made Tangier their home.

The area around Tangier is also home to some of the best beaches in Morocco. Explore them for yourself as part of Insight Guides Morocco: On Hannibal’s Trail trip. 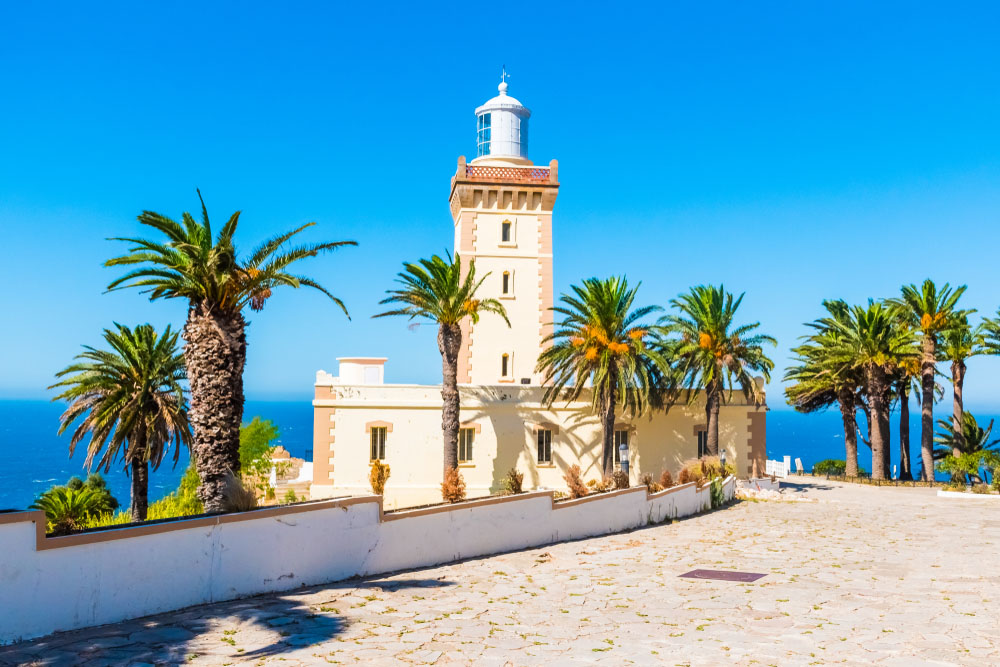 Another of Morocco’s iconic cities, Casablanca was immortalized in the 1942 film of the same name, starring Humphrey Bogart. Don’t be fooled by the city's on-screen sin city image though: Casablanca is one of Morocco’s most modern cities, its economic capital, and a fast-changing metropolis. The city’s burgeoning business sector and the westernized middle class and their cosmopolitan outlook make Casablanca more reminiscent of the south of France than the Maghreb. Architecturally, the city is home to an unusual but distinctive blend of Parisian art deco and local Moroccan craftsmanship, which starkly contrasts with the modern neighborhoods and districts. Away from the Medina, the elaborately decorated Hasan II Mosque, the Place du 16 Novembre and the Place Mohammed V are just a few of Casablanca's must-sees. 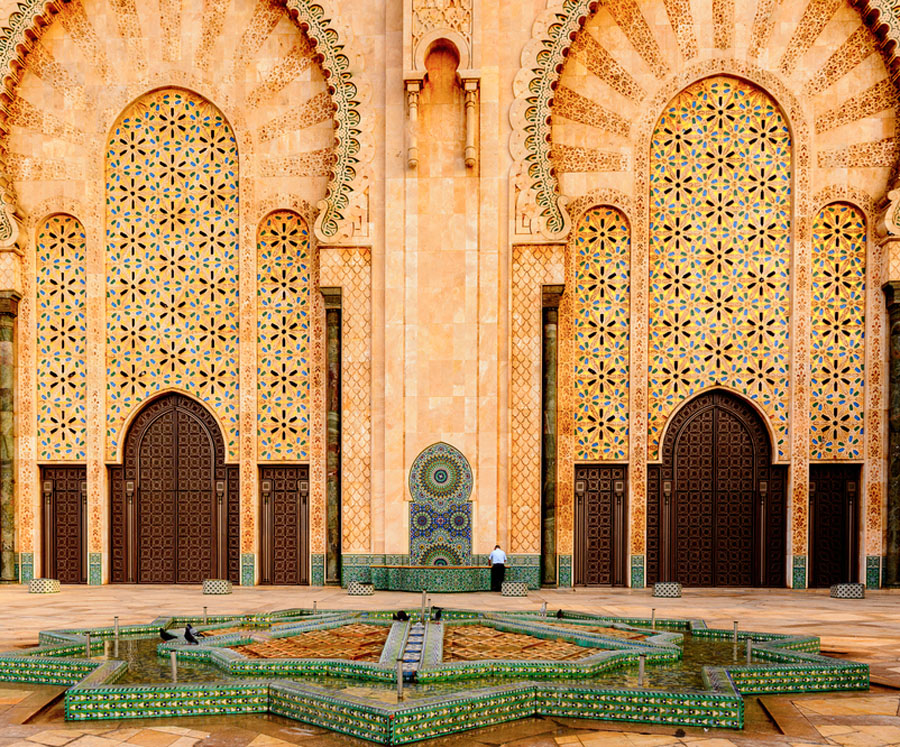 Ready to take a trip to Morocco?

Insight Guides can help plan and book incredible trips in Morocco for you. Simply get in touch with us, to let us know when you would like to travel and your ideas for the trip. Local travel experts will then plan a personalized itinerary especially, which you can amend until you are completely happy with every detail before booking. Browse our existing Morocco trips for inspiration, and remember that all our pre-planned itineraries can be tailored to suit your specific requirements.

We stumbled across Rough Guide while searching for a company that can organize a private tour in Morocco with a short notice. And we found a Gam! They worked with us on our expectations, interest, hotel level and recommended activities and experiences... Read more

We stumbled across Rough Guide while searching for a company that can organize a private tour in Morocco with a short notice. And we found a Gam! They worked with us on our expectations, interest, hotel level and recommended activities and experiences and it all went without a hitch! Yana, Jana, Hassan (our driver) and the local guides made this trip unforgettable! We are already looking to organize our next trip with them!