Want to get involved in the mystery and decadence that encapsulates Venice throughout the Carnevale di Venezia? If you're not sure where the celebrations start, what events to attend, where to find the iconic Venetian masks or even how to get involved, here are a few starting points 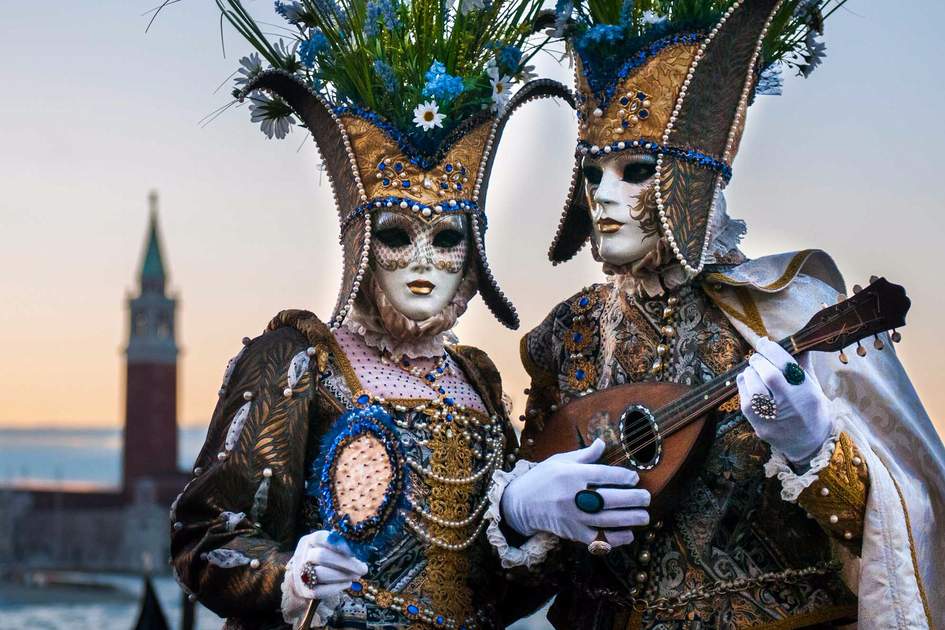 A couple of masks at St. Mark square during the carnival of Venice. Photo: Shutterstock
PrevNext

Carnevale di Venezia’s origin dates back to 1162 when Doge Vitale Michieli II led the Republic of Venice (Repubblica Di Venezia) in the defeat against the Patriarch of Aquileia, Ulrich II of Treven. Following the victory, the Venetians gathered in Piazza San Marco (St Mark’s Square) to slaughter a bull and a dozen pigs in celebration. Dancing and festivities commenced, and residents began celebrating year-on-year. Today, Carnevale Di Venezia is a two-week long celebration concluding on Shrove Tuesday (roughly matching the first celebration's timelines).  Here's what you need to know for your first time at Venice's world-famous Carnival.

The Festa Veneziana kicks off celebrations with thousands of spectators gathering along the Rio Di Cannaregio to marvel at decoratively themed boats as they float by. Laced with colour and extravagant features (some bear flames, some sparklers), some boats are filled with acrobats and dancers, while others trail huge balloons with scenes of ancient Venice projected onto them. The water parade continues the following day, with boats sailing along the Grand Canal to Cannaregio where food stalls serve traditional Venetian carnival foods, hot drinks, beer and wine.

2. Buying your own Venetian mask

Mask wearing in Venice dates back to the 1260s when they were worn by everyone from peasants to royalty as an everyday item of clothing. Masks were worn to expel social classes and rules of engagement. They allowed commoners to mingle with the elite and individuals to create a new persona, regardless of their social status. They were the ultimate symbol of freedom. Today, Venetians seldom wear masks other than for certain events, the Carnevale di Venezia being the most popular time.

Visitors can buy a mask for both the festivities and as a souvenir from almost any shop in Venice. For something more individual and of higher quality, however, visit a papier-mâché workshop where you can pick up a home-made mask, or even better make your own at Sogno Veneziano Atelier. Most current mask styles date back to Commedia dell’arte (Italian comedy theatre). Below is a break-down of styles – make sure to choose your mask wisely.

The Bauta – Traditional mask of casanova, it is full face with a square jaw and large chin. They are either plain white or heavily gilded. Bauta was the original Venetian disguise used to ensure anonymity at political events.

The Volto – Full face mask that depicts normal facial features including lips, chin and nose. It was the most commonly worn mask as the material used to make it was light. Often plain white for a ghost-like feel.

The Medico Della Peste – A mask worn by plague doctors. Full face with a long hollow beak and round eyes. A very simple design. The long nose was stuffed with herbs and spices to ward off bad air from plague victims.

The Arlecchino – Joker-like, colourful, full face mask with a short nose, arched eyebrows and a large smile. Often has a large headpiece or collar with bells on. Traditionally worn by the character it is named after in Commedia dell’arte, the original fool.

The Colombina – Named after the maidservant in Commedia dell’arte, a half mask covering only the eyes, nose and cheeks. Ornate and heavily decorated, it was designed for the character so she didn't have to cover her attractive face.

The Pantalone – A Half mask with a hook nose and slanted eyes. Slightly colourful but not too embellished. Worn by the character Pantalone in Commedia dell’arte, he was an old merchant, very intelligent, witty and greedy.

The Zanni – Again a half mask with a long beak nose. It has bulging eyebrows and cheeks with a low forehead. Named after the character that wore it in Commedia dell’arte. He was poor and empty-headed, used to entertain the audience with stunts. It is believed the longer the nose on this mask the stupider the person wearing it. 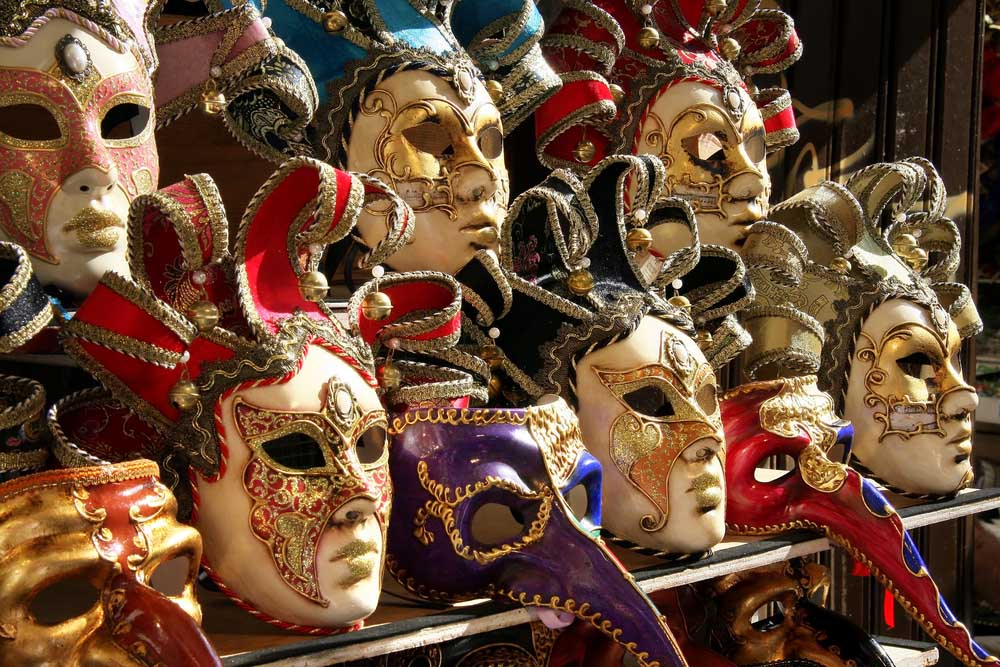 Venetian masks are a must-purchase if you're visiting during the Carnevale di Venezia. Photo: Shutterstock

Step back in time on the streets of Venice during Carnevale di Venezia: you'll discover locals don a lot more than masks, dressing in full period costume while wandering the streets. If you're eager to join the spirit of carnival you can hire a costume from a number of stores throughout the city, but make sure you book well in advance, once you get there it will be too late. For an authentic, quality costume, hire from Atelier Tiepolo at the Danieli Hotel. Items needed for traditional period costumes are:

For women – Dress, mantle, mask, wig or ribbon to tie your hair, gloves and costume jewellery.

For men – Suit, including jabot and socks, wig, black tricorn hat, mantle, cane and bows for your shoes.

Once you have the full costume why not wear it to a masquerade ball, adding a night of true decadence to your stay. Masquerade balls became synonymous with Carnevale di Venezia in the 16th Century after they became popular across Europe and were eventually introduced to Italy. It didn’t take much for this passionate nation to embrace nights of anonymity, intrigue and risk. Enter a world of candlelight, dark corners, masks and mystery where people have the freedom to commit devilish acts hiding their airs and graces until the early hours. The official masquerade ball for Carnevale di Venezia is The Gallery of Wonders, held on various nights throughout the two weeks. There are a number of other balls across the city where you can also loose your inhibitions, including Venice Mascheranda Grand Ball, which is hosted in a palace overlooking the Grand Canal.

Every ball starts with entertainment of the most unusual: musicians, fools and acrobats entertain while you sip freshly made apéritifs. Traditional food will be served for dinner. Carnevale is a time to say farewell to meat before the beginning of lent so expect sausages, pork chops, lasagna, and cheese rissoles. Desserts served are just as traditional and include: chiacchiere (fried pastry dusted with sugar or drizzled with honey), sanguinaccio (sweet custard made with chocolate and pigs blood), and migliaccio (a cake made from ricotta and lemon). Dinner is followed by traditional Italian folk dances being taught and danced into the night. Drinks flow continuously, accelerating the night of gluttony, debauchery and scandal. 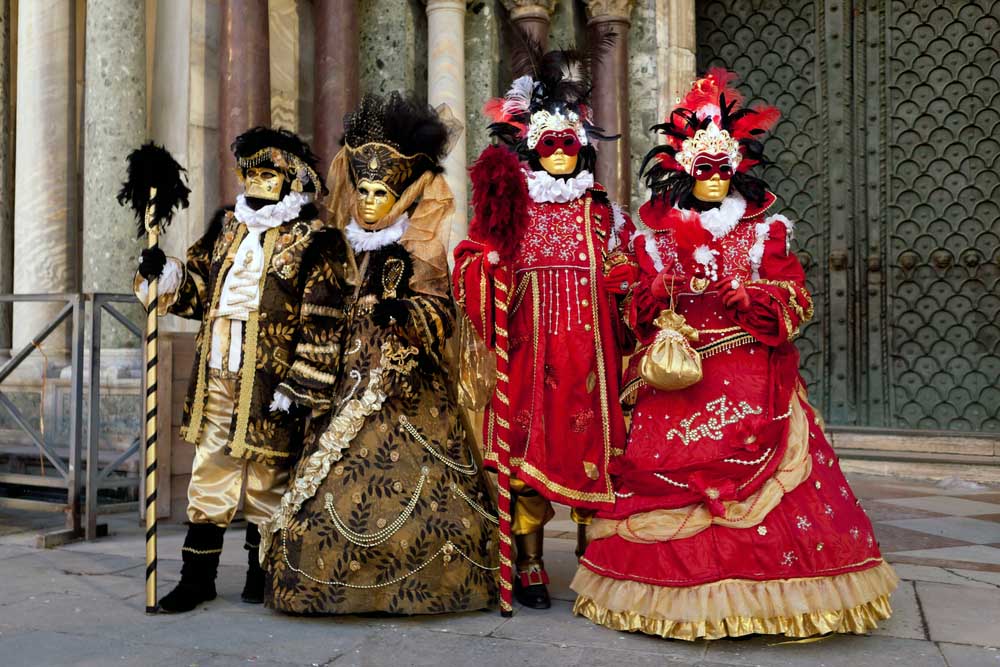 5. Soaking up the atmosphere as it sweeps over the streets

If none of the above takes your fancy but you’re intrigued to discover what all the fuss is about, spend your time at Carnevale di Venezia exploring the backstreets and canals alongside the costume-wearing locals and masked tourists. Take pictures with them, or of them, people watch in piazzas with a traditional molten chocolate drink and fresh cream or a divine Italian coffee to keep you warm as you absorb the atmosphere of playfulness and jest that encompasses the city. Caffè Florian in Piazza San Marco is an historic coffee shop which offers outdoor seating on the square and coffee to die for.

Shrove Tuesday brings an end to Venice's festivities, but what an end it is. Thousands gather in Piazza San Marco for a full on day of celebrations and awards. During the morning Venetian artists are hosted for the last time to display their creations, the finalists of the Best Masked Costume contest will parade non-competitively on the stage before the maria of the year is decided and the symbol of the city ‘Svolo Del Leon’ is raised above the crowds and fireworks mark the end of daytime celebrations, with only one last Gallery of Wonders masquerade ball left to attend.

Ready to take your trip to Venice to experience the Carnevale di Venezia?