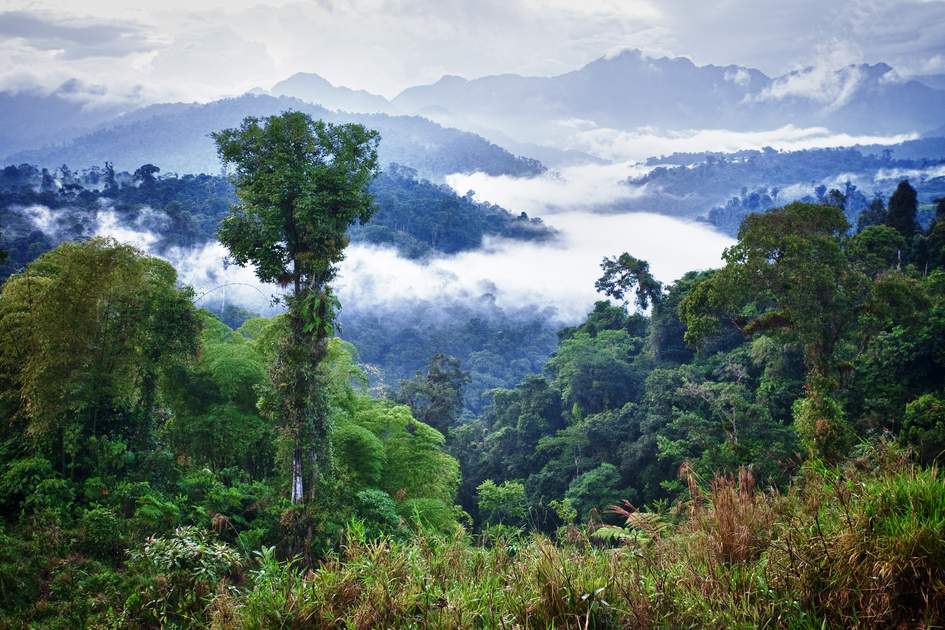 Satellite images show it shrinking: closer up, it is obscured under palls of slash-and-burn smoke. We see it drenched in oil, cut and devastated. And yet still the decimation of the world’s rainforests is a daily reality.

The plight of the planet’s tropical forests has been well publicized. Huge areas of forest are being logged or burned every day; so much deforestation is occurring that, at the present rate, with more than 25,900 sq km (10,000 sq miles) being destroyed for ranching, farming, and logging each year in Brazil alone, some scientists have predicted that 40 percent of the rainforest will disappear by 2050. Of the almost 2 million known species of plants and animals, about half live only in the rainforest. Estimates of species yet to be discovered are numbered in millions. Most of these unknown species live in the tropical forests, which have by far the greatest biodiversity of any region on the globe. Thus deforestation is causing countless extinctions, with many of the plants and animals as yet unknown.

The value of rainforests

Numerous medicines have been extracted from forest plants, ranging from malarial prophylactics to anesthetics, from antibiotics to contraceptives. Many more useful drugs will undoubtedly be discovered in the forests, if they are not destroyed first.

The diversity of species growing in the rainforests also comprises a storehouse of new strains of agriculturally important plants that may be destroyed by disease or drought. For example, if banana crops were to be seriously threatened by disease, scientists could search the rainforests for disease-resistant strains to cross with the commercially grown varieties and eradicate the problem.

The forests are also essential for the survival of indigenous peoples. Hundreds of discrete communities living in the jungles of Latin America (and in Africa and Asia) are threatened by rainforest loss.

On a worldwide scale, the moderating effect of the rainforest on global climate patterns is only recently being understood. Deforestation could cause severe global warming, leading to melting ice caps, rising ocean levels, and flooding of coastal regions. Climates would be altered to the extent that some major crops, such as wheat, would no longer grow.

One of the chief reasons the rainforests are being destroyed is the displacement of poor campesinos who migrate from other parts of the country looking for free land on which to make a living. Generally the soils are not well suited for agriculture and are quickly depleted of scarce nutrients. The short-sighted colonization policies causing this damage are now at last being re-evaluated and solutions being sought, but the forest is still being cleared at an alarming rate. Illegal timber-poaching by large forestry companies and clearing of land for large-scale industrial animal farming are other major factors in the disappearance of rainforests.

Debt-for-nature swaps, whereby foreign debts are paid off by the lenders in return for protection of the rainforest, are a move in the right direction, but the developed countries that lend the money must ensure that such incentives reflect the full value of the forests.

Sustainable use, such as rubber-tapping, brazil-nut-harvesting and tourism also help to a certain extent. Rainforests such as the Oriente are vital for the planet’s survival. Whatever the methods used, protection of the planet’s green lung should be regarded as an urgent, global priority.

All November, we'll be posting fascinating articles on Ecuador. Check out our top 10 things to do in Quito and our guide to traditional Ecuadorian clothing.