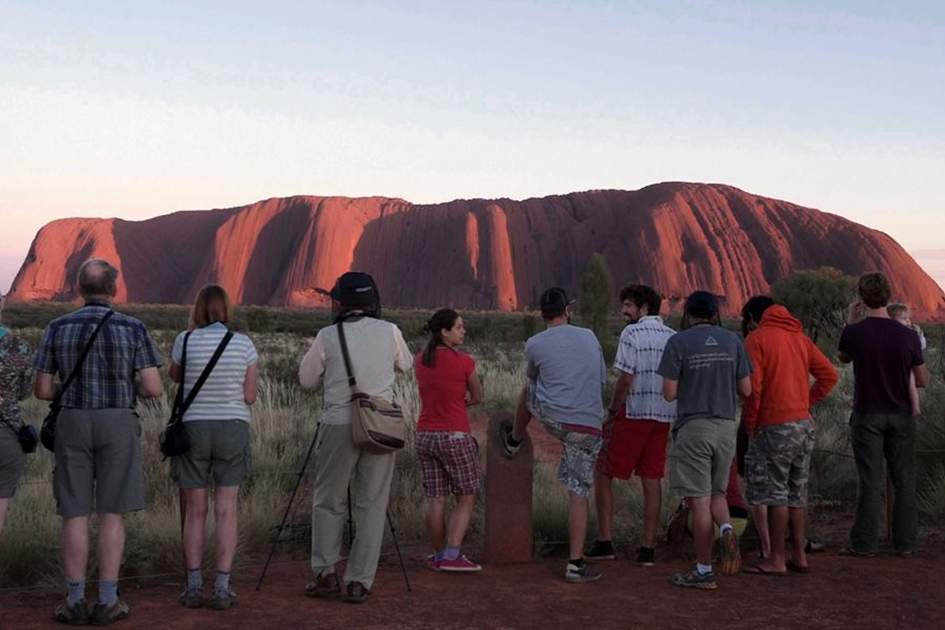 Australia is home to the oldest living culture in the world – that of Indigenous Australians (Aboriginal and Torres Strait Islander peoples). These First Australians have a complex and mutually supportive relationship with the landscape and a rich social, cultural and linguistic heritage. For the visitor, gaining an understanding – however superficial – of this heritage is extraordinarily rewarding.

For too long, the culture and rights of Australia’s Aboriginal and Torres Straits Islander peoples were suppressed by the white majority. That they have survived is in many ways a miracle – the First Australians have endured the appropriation of their land, innumerable massacres and the removal of their children by the Church and state, but still their cultures and spirits flourish.

Aboriginal culture is underpinned by ‘the Dreamtime’, a belief system that puts Aboriginal history, traditions and culture under a single mythological roof. Dreamtime stories recount how ancestral heroes created the stars, the earth and all creatures. They explain the origins of Australia’s unique animals and plants, and how humans can live in harmony with nature.

The land plays a crucial part in Dreamtime lore, and responsibility for protecting significant sites is central to Aboriginal spiritual life. This is one of the reasons why land rights have always been a top political priority for the Aboriginal and Torres Strait Island peoples, and why the 1992 decision by Australia’s High Court to award Eddie Mabo, a representative of the Meriam people, native title to the Murray Islands in the Torres Strait was greeted with elation and a sense of vindication by the Indigenous population. The Mabo judgement led to the Native Title Act 1993, and many subsequent claims have been awarded. Others are still to be negotiated and agreed, but a number of the country’s national parks and Aboriginal sacred sites are now under Indigenous ownership and management, bringing Aboriginal and Torres Strait cultures closer than ever before to visitors. Today, the cultures and traditions of Indigenous Australians are integral to Australian society and identity, even though citizens of Aboriginal and Torres Strait Islander descent make up less than three percent of the national population. 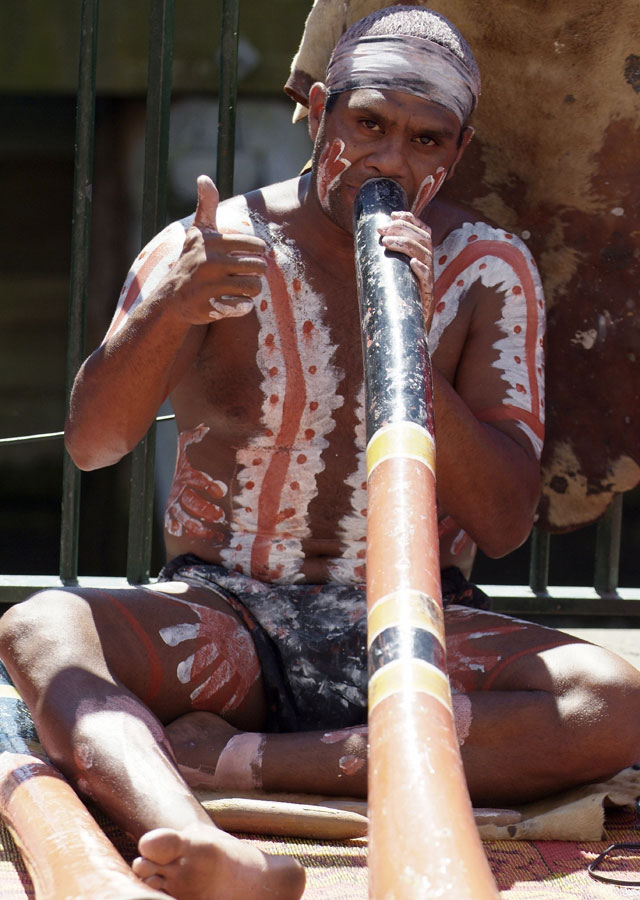 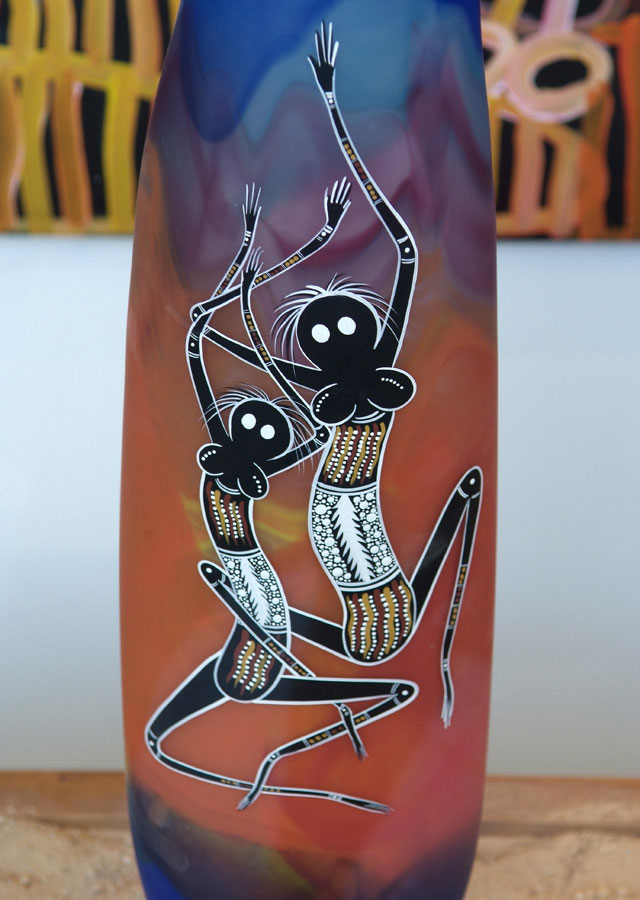 More than half of Australia’s Indigenous population lives in either New South Wales or Queensland. Although actual numbers are nowhere near as high in the Northern Territory as they are in these two larger states, the Territory’s population has the largest proportion of Indigenous people (almost 30 percent). This means that visitors are far more likely to encounter Aboriginal culture in these states than they are in the south or west of the country.

Indigenous Australians are also more likely to live in rural or remote areas than the rest of the population, meaning Outback trips offer more chances to gain an understanding of Indigenous culture than do city sojourns.

One of the most satisfying experiences that visitors can have while in Australia is to spend time in an Indigenous-owned or -run national park or reserve. By supporting these enterprises, you will learn about and contribute materially to Indigenous culture and heritage.

A number of remote Aboriginal reserves require visitors to obtain a permit before entering. Arnhemland, near Kakadu National Park in the Northern Territory, is one of these. Here, in a vast and mysterious landscape, Aboriginal people live a semi-traditional existence. To visit, you will probably need to take an organised tour; operators include Lord’s Kakadu and Arnhemland Safaris, Nomad, Magela Cultural and Heritage Tours and Arnhemlander.

Uluru-Kata Tjuta National Park is owned by the Anangu people, and is managed in association with Parks Australia. The park’s Uluru-Kata Tjuta Cultural Centre has fascinating exhibits on Aboriginal law, tradition and customs. 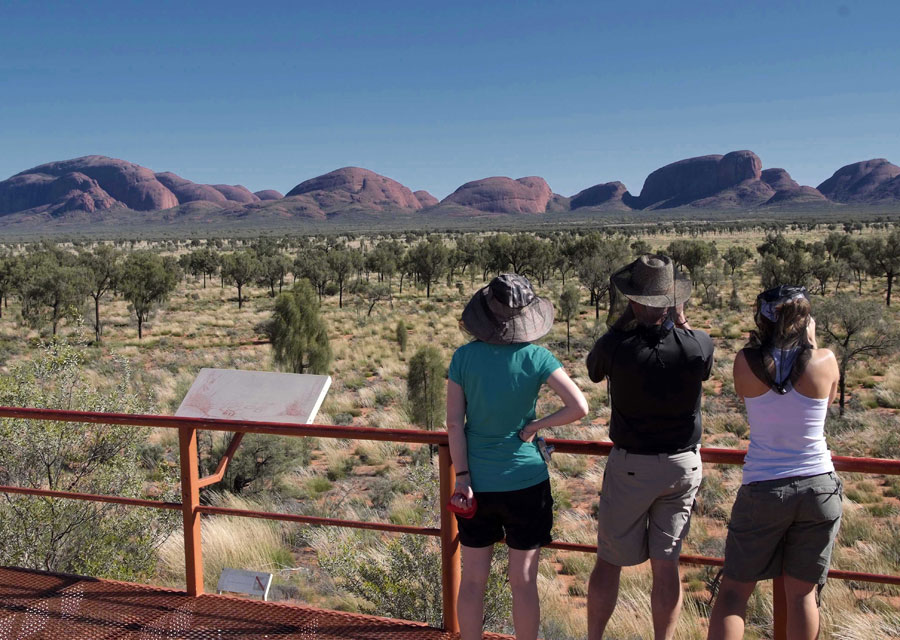 Many Outback towns and national parks have impressive, Indigenous-run cultural centres that welcome visitors and give an insight into Indigenous culture.

The Nyinkka Nyunyu Art and Culture Centre in Tennant Creek features multimedia and other displays that offer a great introduction to the local Warumungu culture. The centre also runs tours of its indigenous garden and of surrounding bushland, focusing on bush tucker.

The stunning Brambuk Cultural Centre in Victoria’s Grampians (Gariwerd) National Park is run by five local Indigenous groups in association with Parks Victoria. The displays offer an insight into local culture and history through stories, art, dance and objects. The centre also runs tours of nearby rock art and sacred sites.

There are more cultural tourism operators working in the Australian Outback than there are flies – and that’s saying a lot. Choosing the right one can be a challenge, but there’s a lot to be said for taking an Indigenous-owned and/or-run tour such as those listed below.

Alice Springs–based Anangu Tours offers camel tours in the Uluru-Kata Tjuta National Park as well as dot-painting workshops and a cultural walking tour of Uluru led by an Anangu guide.

The Tiwi Land Council leases the rights to run tours of Bathurst Island to Aussie Adventure Holidays. The tours include a smoking ceremony, morning tea with members of the local community and an exhibition of traditional dancing. They can be extended to include wildlife spotting and participation in traditional food hunting and gathering. 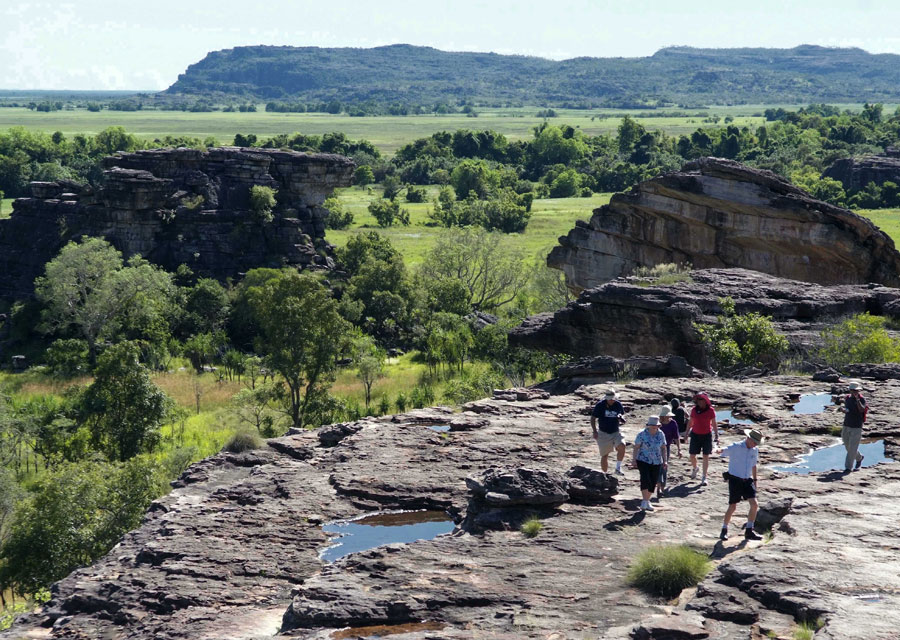 Artists such as Emily Kngwarreye, Rover Thomas and Cifford Possum Tjapaltjarri gave Australian Indigenous art an international profile in the 1980s and 1990s that it continues to enjoy today. Its various forms – including bark painting, dot painting, rock painting, rock engravings, body painting and weaving – are being practised in communities throughout the country, and art is a major source of Indigenous income, particularly in the Outback.

Key Aboriginal rock art sites include Nganalang in Keep River National Park, the Kimberley region of Western Australia, Carnavon Gorge in Queensland, the Burrup Peninsula in the Pilbara region of Western Australia, Sacred Canyon in South Australia’s Flinders Ranges, the town of Laura in Queensland, and the Ubirr and Nourlangie Rocks in the Northern Territory’s Kakadu National Park. 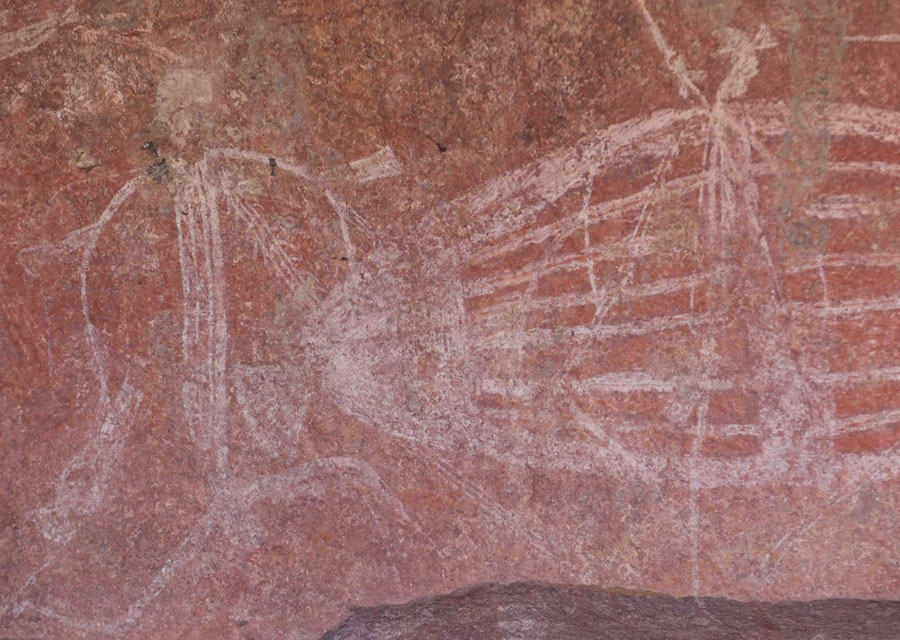 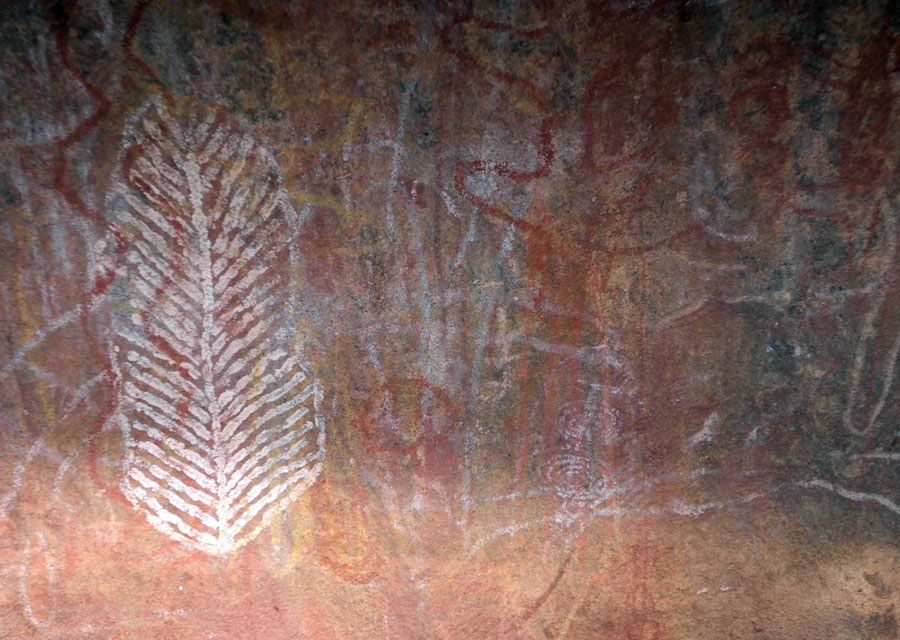 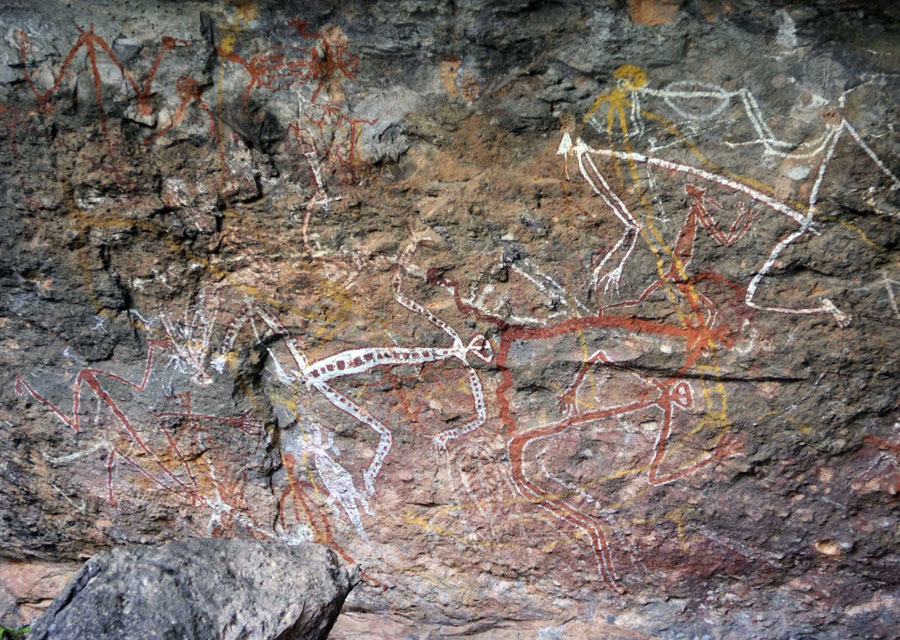 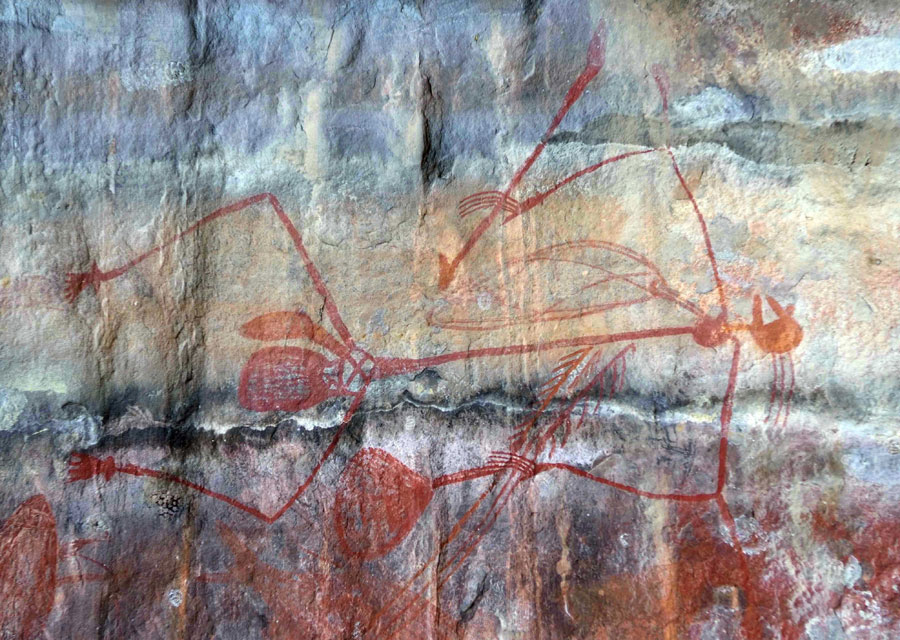 Tiwi Art operates small tours from Darwin to the three main art centres on the Tiwi islands. Participants meet local Torres Straits Islander artists while they work, and are offered the opportunity to make purchases.

The Araluen Cultural Precinct in Alice Springs is home to the Araluen Arts Centre and the Central Craft studio and shop. Its guided cultural art tours focus on the connection between the Dreaming, contemporary Aboriginal art and the land of Mparntwe (Alice Springs).

Aboriginal-guided full-day tours combining a wildlife safari with bush tucker-gathering and a campfire cook-up at sunset are offered by Kakadu Animal Tracks.

In Sydney, learn about the Aboriginal heritage of the Royal Botanic Gardens and sample indigenous bush foods in an Aboriginal Heritage Tour.

Melbourne’s Royal Botanic Gardens offers an Aboriginal Heritage Walk around the gardens with Indigenous guides, in which you can experience a traditional smoking ceremony and discover traditional uses of plants for food, tools and medicine.

We're exploring Australia this month. Searching for things to do on your trip Down Under? Take a look at our articles on the country's world-famous wine, unique wildlife and fantastic beaches.

A well thought out itinerary which was ideal for the 19 days we were away.

A well thought out itinerary which was ideal for the 19 days we were away.