The jewel in Sri Lanka’s wildlife crown, the magnificent Yala National Park provides a memorable showcase of the island’s fauna, with troupes of elephants, gaping crocodiles and one of the planet’s largest leopard populations, offering an unrivalled opportunity to see this most elusive of big cats in the wild.... 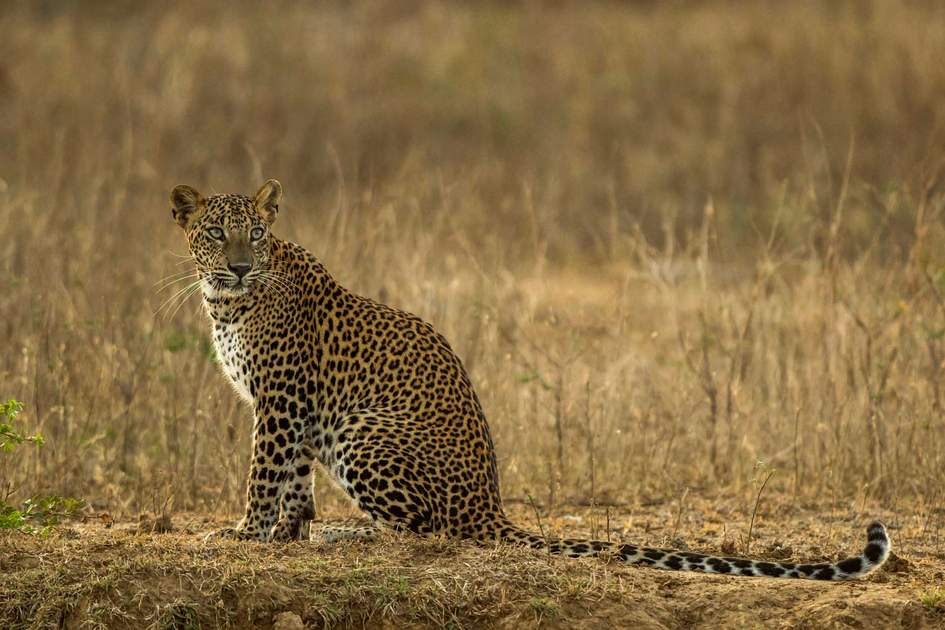 The most famous of Sri Lanka’s 22 national parks, Yala covers a vast swathe of countryside in the southeast of the island beyond Tissamaharama, protecting a diverse range of habitats including scrub jungle, tanks, brackish lagoons and swamps. Much of the park is closed to visitors, but the area which is open has probably the richest and most varied collection of wildlife in the country, and is the best park in the country for viewing the biggest variety of mammals in a single day. Wildlife includes a substantial elephant population, elusive sloth bears, gorgeous bird life and, most famously, a significant leopard population. Although they’re not easy to spot, you’ve reasonable odds of seeing one if you spend some time in the park with a reputable outfit.

Points to note: The best way to visit the park is to take an early jeep tour at around 6am to view bird life, or at around 3pm for elephants. Leopards can sometimes be seen, but sloth bears are elusive. The park is closed every year from 1 September to 16 October, when animals move elsewhere in search of water. This tour follows route 11 if you take the A2 for 128km (80 miles) east from Galle; alternatively, after route 8 drive 88km (55 miles) south from Ella on the A23/A2 to pick it up at Tissamaharama.

Around 50 miles (80 km) east from Galle, the town of Hambantota was the focus for massive development during the tenure of former president and local son Mahinda Rajapakse, with projects including the construction of a massive Chinese-sponsored port and the island’s second international airport. Turn off the highway that bypasses Hambantota to drive into the town, one of the biggest along the south coast. The town has Sri Lanka’s largest population of Malay Muslims – its name is said to derive from sampans, the boats that the Malays arrived in, and tota, or harbour. You will notice an unusually large number of mosques here, as well as the occasional East Asian-looking face amid the Sri Lankan crowds.

Hambantota is also known as the island’s major centre of salt production, which is collected from the enormous evaporating salt pans that ring the town, and for its curd. Made from buffalo milk, it is sold from many roadside stalls and makes a delicious treat – look for the strings of clay pots hanging up outside local shops.

Return to the coastal road to drive through lush, low vegetation that gives way to thorny plants and small shrubs, typical of the dry zone. After 15km (9 miles) the road passes Bundala National Park, famed for its aquatic bird life, particularly the enormous flocks of flamingoes which can often be seen here. Beyond here, the road gradually turns inland towards Tissamaharama (or ‘Tissa’, as it’s usually called), one of the most historic towns in the south. Under the name of Mahagama it formerly served as the capital of southern Sri Lanka during the Anuradhapuran period, and still has a pair of huge stupas and a collection of ancient tanks.

If you are not going to stay close to Yala, safaris can easily be arranged in Tissa, or you can arrange to be picked up at the Rajapakse International Airport by the Yala Safari Camping team (tel: 077 3175 482).

To reach Yala National Park, set off southwards towards the coast along the road to Kirinda, 10km (6 miles) away. At Kirinda there is a lovely view of the southern coast from a temple atop a rock. This is the spot where Vihara Mahadevi, the mother of the Sinhalese hero Dutugemunu, is said to have landed after she had been cast adrift at sea in a boat as a sacrifice by her father to placate angry gods who had caused the sea to rise, flooding the coast – an ancient legend which perhaps encapsulates memories of an earlier Sri Lankan tsunami.

Signs of human habitation become sparse as the road winds for another 33km (21 miles) along the coast through scrubland, salt pans and swamps where buffaloes wallow. Watch out for peacocks preening themselves and the grey silhouettes of wild elephants, looking like boulders, in the distance. Just before the entrance to the park is a signpost to the Cinnamon Wild Yala hotel, the closest hotel to the park and the most convenient place to stay or have a meal. Safaris can be arranged with the drivers of jeeps parked at the hotel’s gate. 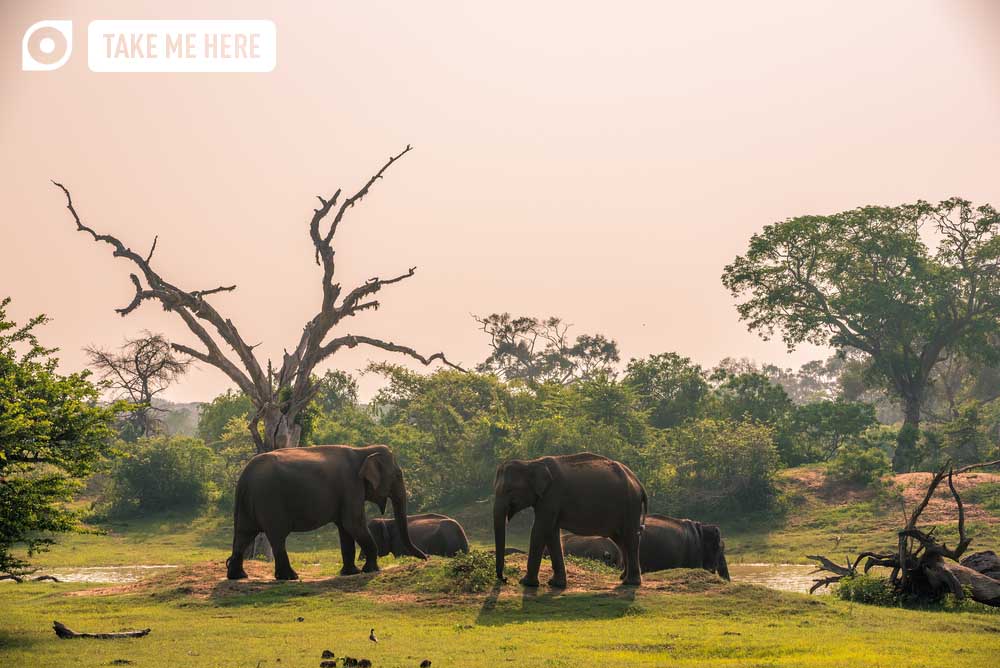 By hired jeep it takes about 10 minutes to drive to the Yala National Park from the Cinnamon Wild Yala hotel. There is a small museum near the entrance showing the development of the park, as well as models and skeletons of animals found there.

In addition to the entrance fee, you have to pay a tracker assigned by the park. The trackers are experienced in the ways of the jungle and sometimes prove to be fascinating companions, spotting the best places to find wildlife, including herds of deer, buffaloes, crocodiles, sambhurs, monkeys, flying squirrels and birds that migrate from India and as far afield as Europe including painted stork, heron, ibis, green bee-eater, green pigeon and Malabar pied hornbill. These spots are usually near waterholes, where animals come to drink in the evening and early morning.

The greatest thrill, however, is the sight of wild elephants and leopards. The elephants found in Sri Lanka belongs to the same subspecies as that found throughout Asia. These huge creatures move majestically and are seldom bothered about visitors, except when they feel threatened. The real highlight of Yala is its remarkable population of leopards, reckoned to be the densest anywhere in the world, with 60–70 animals living in the area of the park open to visitors. Sightings of these notoriously difficult-to-spot and largely nocturnal animals are far from guaranteed, but spend a day in the park and you’ve got a reasonable chance, with animals sometimes seen sat atop the various rock outcrops which dot the park preening themselves in the sun, dangling from the branches of a tree overhead, or occasionally sauntering casually down one of the park’s dirt tracks.

Ready for your Sri Lanka holiday?

From family adventures to luxury holidays for two: review, modify and book a ready-made trip with Insight Guides online now. Alternatively, talk to our local experts in Sri Lanka today, to tailor your trip to suit your travel style, interests and budget.

Despite our late arrival, we were met at the airport and taken to our hotel. We had a car and driver/guide whose English was good. Sometimes he would suggest other things to see, not on the itinerary. This was great as many days had a lot of free time... Read more

Perfect balance of activities and rest. Excellent standard of accommodation. Highly efficient organisation and great value for money. Highly knowledgeable and friendly guide that helped to make the Tour for us :-) :-)