Finding the most beautiful beaches in Croatia

Croatia’s island-peppered coastline on the clear blue Adriatic Sea is unquestionably its leading attraction. From Rijeka in the north to Dubrovnik in the south, you can discover unspoilt sand and shingly stretches and dazzling pebbly coves. Here is our guide to 10 of Croatia's best beaches. 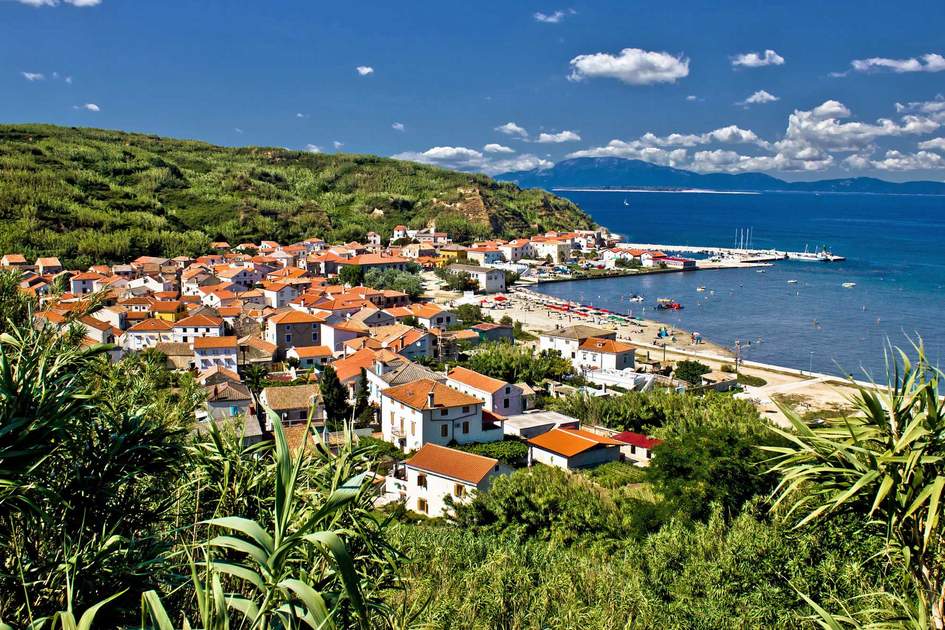 Desert island escapes don’t come much better than the tiny, sandy island of Susak, off Croatia's northern coast. To get there, take a ferry from Mali Lošinj, which is itself a fair way from the mainland – adding to Susak’s special appeal. The island’s beach, Spiaza, is a majestic beige arc stretching out from Susak village. The bay waters are shallow meaning that you need to wade out some distance to reach sea that’s deep enough for swimming.

To savour a beach that consists of a long strip of sand stretching away to the horizon, head to Nin. Around a 20-minute drive from the city of Zadar, Nin’s expansive Kraljičina Plaža (Queen’s Beach) is complemented by spellbinding views of the Velebit mountains across the water. You may notice fellow sunbathers coating themselves with sludge – don't be alarmed – the rich mud from the reedy area behind the beach has natural curative powers for easing aching muscles and joints. Nearby, Ninska Laguna Beach is popular for kiteboarding and there are a couple of surf centres where you can rent equipment and take classes. 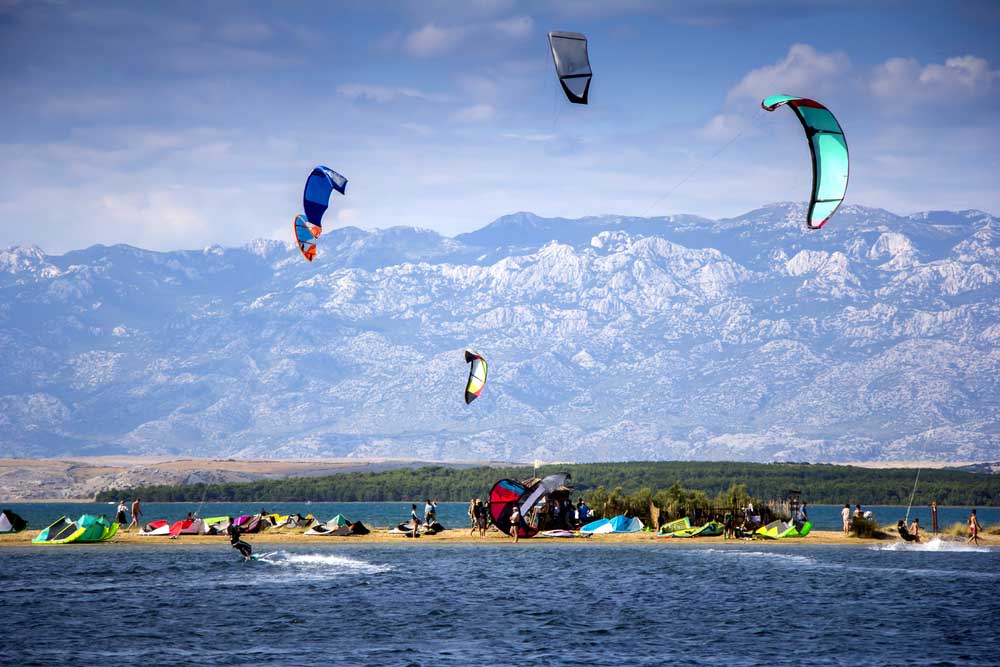 Walking distance from the centre of the town of Split on the Dalmation Coast, Bačvice Bveach is a shallow sand and shingle bay that plays an important role in the lives of the city’s residents. Popular with families, it offers a buzzing social scene, while a pleasure pavilion to the east houses cafés, bars and restaurants. Bačvice is also the home of picigin. This traditional Dalmatian game requires much leaping around in the shallows as players try to stop a small ball from hitting the water.

Lovrečina Bay is home to one of the several idyllic beaches on the third largest of Croatia's islands ,Brač, off the coast at Split. Its sandy shore borders, clear waters, and the ruins of a medieval church stand behind the strand among olive groves. Limited parking and the lack of a local bus stop help stop the beach from becoming overcrowded. Discover destinations including Brač Island as part of Insight Guides’ Sailing Croatia’s Adriatic Coast trip. 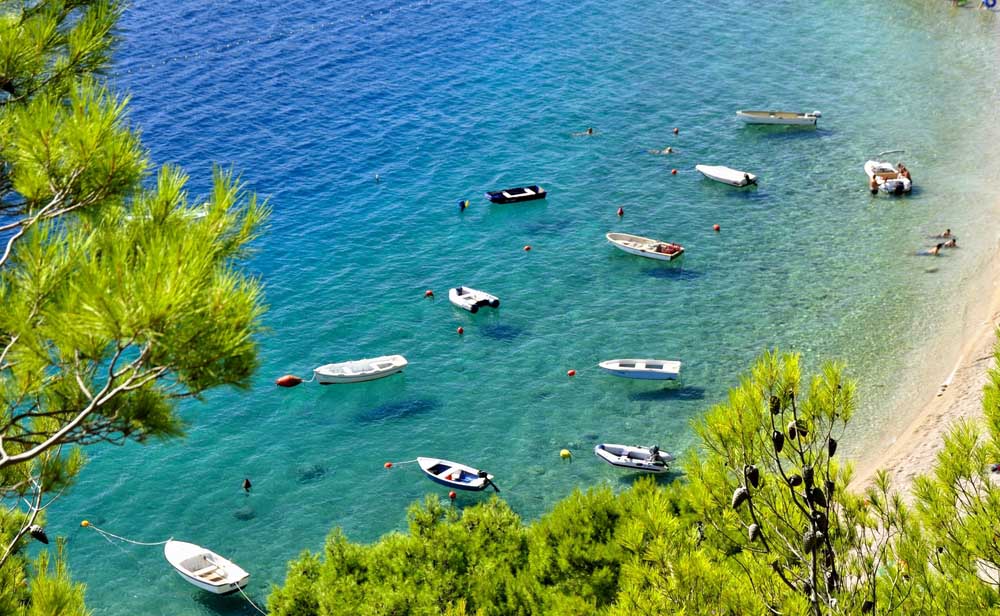 The port of Hvar is famous for its chic bars and nightlife. Out of town to the east, there are several fine spots to explore in bays and coves. Uvala Dubovica, a broad pebbly beach next to a historic manor house, is the most attractive. The bay is shallow, making it good for family paddling, although in high season there are often motor boats and yachts on the water. Experience the dramatic beauty of Hvar and other islands as part of Insight Guides’ Croatia’s Dalmatian Coast trip.

Many of Hvar’s beaches are pebbly meaning you need to carefully step into the sea onto a stony seabed, but at Grebišće the soft sands are ideal for gently paddling around. Located east of Jelsa, off the Sućuraj road, you can find the beach by walking through Grebišće campsite. The beach is narrow but the bay is shallow and sandy underfoot – making it popular for splashing around. A beach bar under trees on the headland is your port of call for cool drinks and snacks. 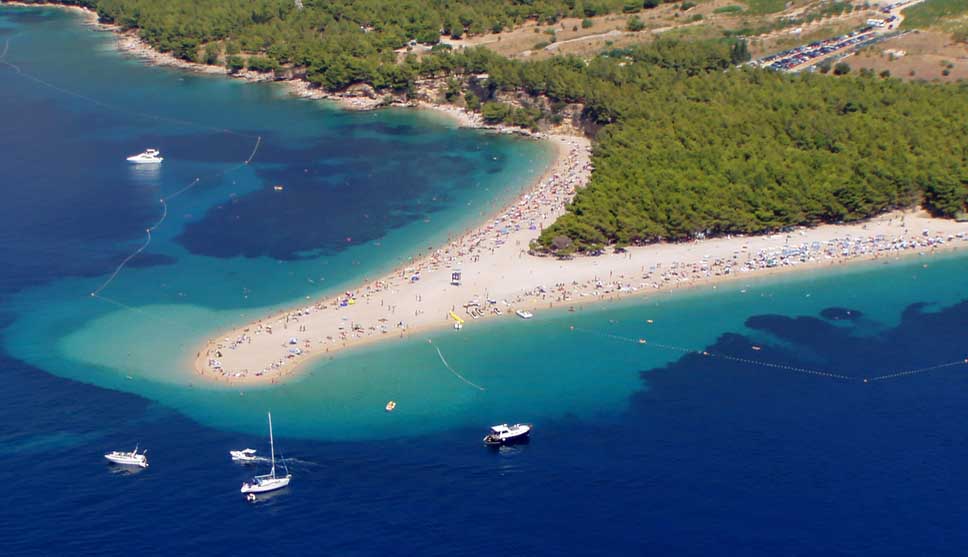 Brač Island's Zlatni Rat – one of the best beaches in Croatia. Photo: Shutterstock

A silvery 400-metre-long promontory of shingle stretching out into a turquoise sea, Zlatni Rat (Golden Cape) is perhaps the most beautiful of all Dalmatian beaches. Its pebble peninsula, clear shallow waters and sweeping sea views make it a destination that is very difficult to leave once you have arrived and settled down to savour the sunshine.

As you draw closer in a taxi boat from the neighbouring island of Vela Luka, the islet of Proizd appears to be just a simple mound of pine trees and vegetation rising out of the Adriatic. However, it is one of the most seductive destinations for sunbathing and skinny-dipping in all of Croatia. It offers three dramatic ‘beaches’ consisting of shelving slabs of white rock sloping into the clear turquoise sea.

Sometimes the journey to and from the beach can be as delightful as the time you spend on it. Travelling to Šunj beach on Lopud island involves an enjoyable 50-minute crossing on the Dubrovnik-Šipan passenger ferry. On arrival, a short hike over the car-free island takes you to the secluded beach. Šunj is a graceful arc of fine sand and shingle stretched between two rocky promontories, backed by a relaxed beach bar. 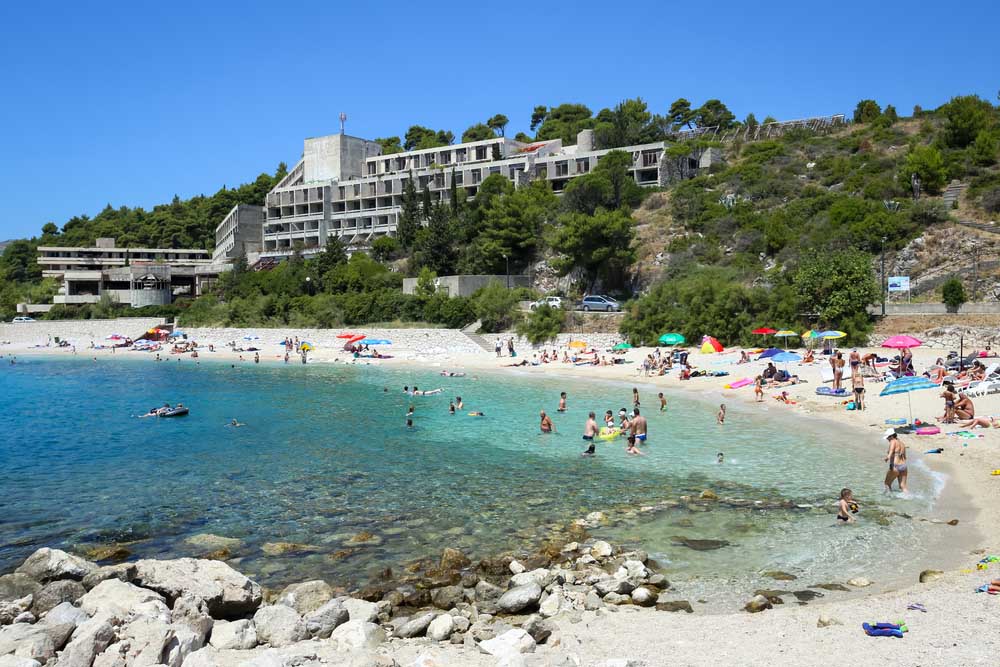 Beach next to the former Goricina hotel in Kupari, Croatia. Photo: Shutterstock

South of Dubrovnik, the former holiday resort to the Yugoslav Peoples’ Army, Kupari, suffered heavy bombing during the 1991–95 war. Hotels there have lain derelict ever since lending the area a post-apocalyptic air. However, it’s home to one the best beaches in the Dubrovnik area, a fine crescent of shingle and sand, with an extremely unusual backdrop of shell-damaged hotels. Note that the hotels are unprotected and unsafe – so it's wise to resist the temptation to explore them.

Ready to explore Croatia's coastline on the Adriatic Sea?

Croatia has more than a thousand islands peppering the waters off its coastline, which you can discover as part of an unforgettable journey. Our local experts can plan incredible trips in Croatia for you. Simply Get in touch to share your ideas for the trip and let us know when you would like to travel. We will then prepare a personalised itinerary to suit your specific requirements, which you can amend until you are happy with every detail before booking. Check out our existing itineraries for inspiration, and keep in mind that all of our planned itineraries can be tailored to suit your needs.

Hello " Beyond expectation " is the way I would describe your travel plan for us. The accommodations were well diversified from historic to new luxury which allowed us to experience two worlds of living. The Vans were very comfortable and the drivers... Read more

Thank you again for creating such a memorable, pleasant experience for us. You made it so easy for us, as foreigners with limited knowledge of Croatia, to navigate our journey. What is more, you did an excellent job of setting us up with first-class contacts and guides to lead the way. Not only do we feel we have experienced all the great joys of the Croatian coast, but also that we have learned a great deal about the nation and its compelling history. Our guides were passionate and informative, but also enthusiastic and friendly. They often tailored our tours to complement our mood and tastes, and introduced us to unique experiences. Moreover, I can't express how much your responsiveness before, during, and after our trip made us feel comfortable that we were in good hands. As avid travelers, we know how rare it is to have exceptional travel support, and applaud your ability to truly create a seamless, enjoyable experience. We have only wonderful memories from our trip, and we have you to thank! We will certainly be sharing Trip Provider information with our friends and family so they can also have wonderful experiences in Croatia! All the Best,