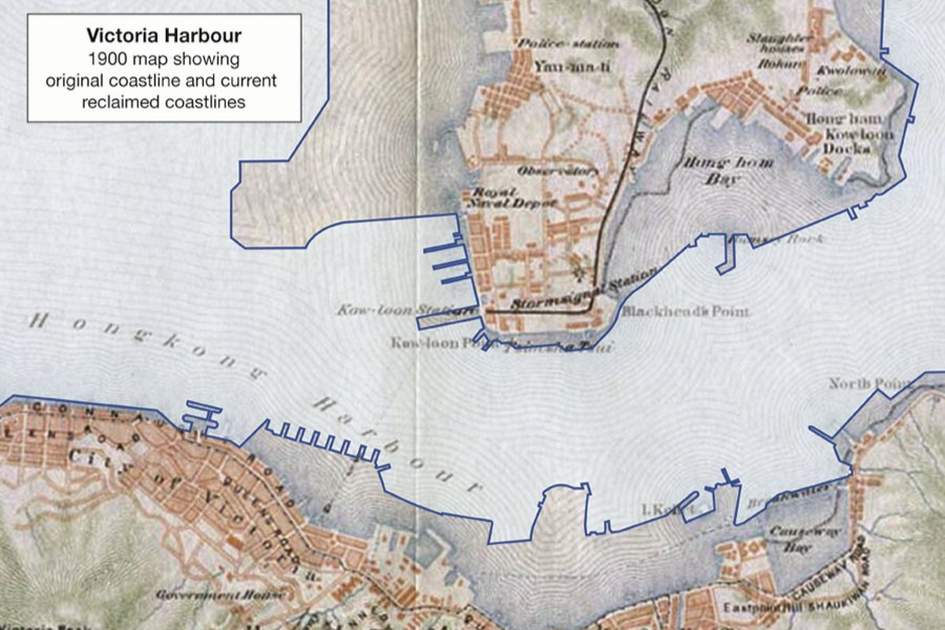 1906 saw the first Cross Harbour Race from Kowloon to Hong Kong Island, a challenge that became an annual spectacle drawing in hundreds of participants and spectators. Concerns over water pollution levels finally led to its cancellation in the mid-1970s: industry in the Pearl River Delta and raw sewage had made the prospect of swimming unsafe.

Last year however, some 30 years later, the waters were deemed safe enough to allow the recommencement of the race; this time slightly to the east of the centre of the harbour, from Sam Ka Tsuen to Quarry Bay Park. The event attracted over 1,000 competitors and was deemed to be a great success, meaning the annual race has returned renewed.

Tomorrow sees the race run again. Good luck to all!

Victoria Harbour itself is the heart and soul of Hong Kong, the catalyst for its genesis. With its steeply sloping seabed, and Hong Kong Island providing shelter from the open sea, large trading ships were allowed a safe harbour and it soon became a key base for the British East India Company’s trading network. It was originally known as Hong Kong Harbour until company officials renamed what was then the largest harbour in China after Queen Victoria.

It is now the location for grand celebrations, enormous firework displays and a backdrop to countless films and photo-shoots. Due to shipping demands there are no bridges spanning the harbour; instead a network of tunnels links Hong Kong to Kowloon. The Cross Harbour, Eastern Harbour and Western Harbour crossings provide road access while the MTR have a further three tunnels providing access.

The numerous visiting cruise ships currently dock at Ocean Terminal to the south west of Kowloon, but a new terminal opens next year on the site of the old Kai Tak airport. The many piers on Hong Kong Island mainly provide local services to surrounding islands. Container shipping, however, has moved further north, away from the busy central Victoria Harbour to Tsing Yi Island and Stonecutters Island.

Stonecutters Island has now merged with the mainland, thanks to a reclamation project in the 1990s, covering in the process the last remains of the SS Queen Elizabeth, a cruise liner lost in 1972 whose listing, damaged frame can be seen in the James Bond movie The Man with the Golden Gun.

Despite the loss of much shipping trade to mainland ports, Hong Kong has retained the status of the world's ninth largest port. Looking across the water at the Star Ferry, light freight boats and cruise liners, it is clear that the harbour remains a bustling working environment.

Hong Kong is one of the main sites of coastal reclamation in the world. The harbour has seen land clawed back since the turn of the last century, and large areas of what is now Wan Chai, Central, Causeway Bayand Kowloon are standing on land that previously never existed. Further projects produced the old Kai Tak airport (now undergoing further reclamation), the areas to the west of Kowloon and the huge Chek Lap Kok International Airport north of Lantau Island.

The Wan Chai area has again seen major works undertaken over the past five years, which has allowed the construction of a bypass for the island's overburdened roads. It is sometimes difficult to keep up with where the coastlines now lie.

It is said that 6% of Hong Kong has been reclaimed from the waters, but it hasn’t stopped there. Currently there are plans to create 1,500ha of new land thanks to the creation of 25 new islands and further coastline expansion. These islands are spread across the New Territories but the gradual filling-in of Victoria Harbour continues, irking residents and environmentalists.

Although renowned as an area of high pollution, the improvement of water quality has seen sightings of turtles and porpoises in the planned development areas. This is further proof to those opposing the works that the plans are folly. Groups such as Friends of the Harbour are battling against the government with public awareness campaigns and legal actions designed to halt the loss of the harbour and its ecology. The results of a recent appeal against land expansion plans are due in early December.