Discover the history and symbolism of Thailand's architecture, from unique temples to houses and even skyscrapers 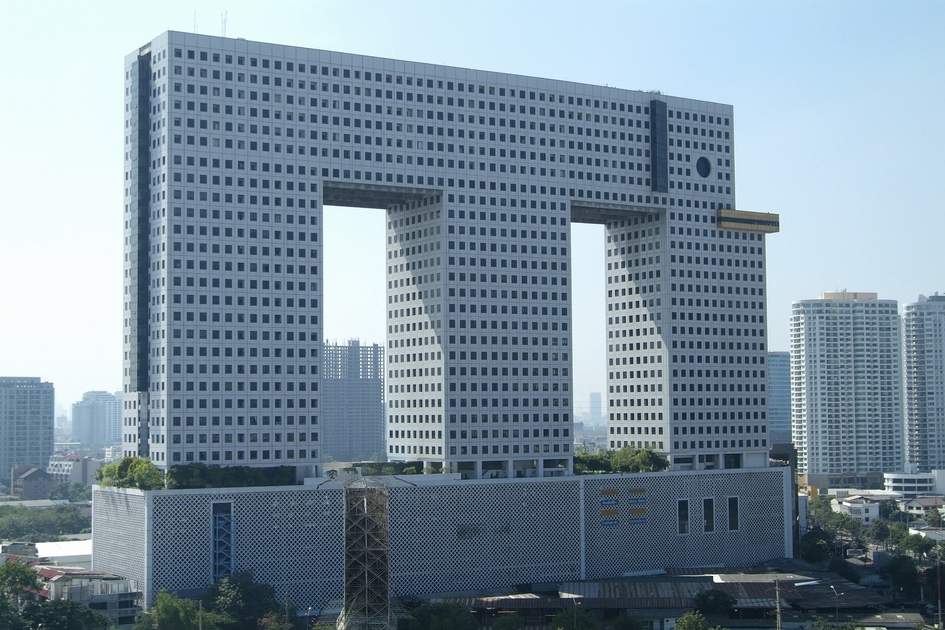 As is the case for much of Thailand’s artistic expression, many of the country’s finest temples, palaces and other noteworthy buildings show the influences of several cultures, yet at the same time are all identifiably Thai

Indian, Khmer, Burmese and Chinese architectural styles have all had a substantial impact on Thai design through the centuries, but there is no mistaking the bright colours, the swooping multi-tiered roof lines, the ornamental decorations, the stunning interior murals and the lovingly crafted gold-adorned Buddha images that define the Thai style. Explore all of Thailand's intricate architectural styles on a trip with Insight Guides: explore suggested itineraries online now.

Any study of Thai architecture begins with the temple, or wat, which assumed a traditional role as school, community centre, hospital and entertainment venue, as well as a place of community worship and where lessons on Buddhism are taught. There are approximately 32,000 temples in Thailand today.

Temple compounds can be vast like Wat Pho in Bangkok, or modest, as is the case in most villages. Whatever their size, temples usually include a bot (ordination hall), a viharn (sermon hall) and dome-shaped chedi, where relics of the Buddha or other holy people may be housed (in Khmer influenced temples these are phallic-like spires called prang, epitomised by Wat Arun)  in Bangkok. In addition, there might be ancillary temple structures such as a sala (open-sided pavilion), guti (living quarters for monks) and a ho trai (Buddhist scripture library).

Symbolism abounds in the ornate decoration found in Thai temples. The ends of temple columns are often shaped like water lilies or lotus buds: the lotus symbolises the purity of the Buddha’s thoughts in the same way it pushes through the mud to burst forth in extraordinary beauty. The bot is always bounded by eight stones, believed to keep away evil spirits, an example of how animist beliefs coexist with Buddhism. Roof peaks are often adorned with chofa, the curling, pointed extensions at each end that represent the garuda, the vehicle of Vishnu. Thai palace architecture too is fairly similar to that of the temple, employing many of the same motifs and construction materials. 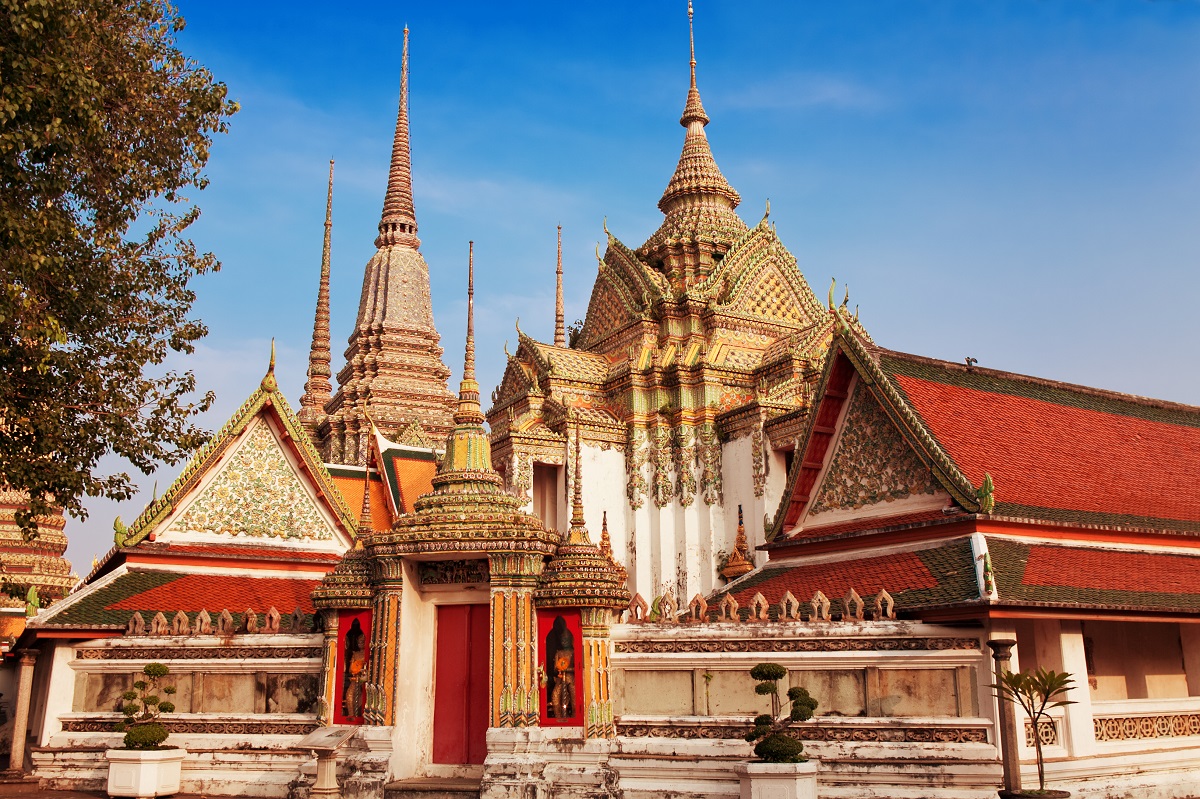 Regional influences have also left their mark on Thai temples. Northeastern Thailand was once part of the sprawling Khmer empire of Cambodia. Hence temples like Prasat Hin Khao Phanom Rung and Prasat Khao Phra Viharn are boldly Khmer in style. In the north, many of the older and less well-known temples are Burmese in style, constructed during the Burmese occupation of what was then the Kingdom of Lanna.

Window panels and murals in Bangkok’s old temples, which you can discover for yourself on Insight Guides holidays, cross many cultural and international boundaries, and are often decorated with Chinese dragons, mythological figures from the Indian Ramayana and foreign merchants wearing distinctly European garb.

Homes for ordinary Thai people share the same sensitive treatment as those for the wealthy. Thai-style teak houses, with their inward-sloping walls and steep roofs, seldom fail to impress with their airiness and their adaptation to the tropical climate.

Like the temple, the Thai house has gone through centuries-old evolution. Some trace the style to southern China, the origin of much of today’s Thai population. Steep roofs, sometimes multi-layered like the temples that dominated village life, with a few rooms or one large divided room elevated on pilings, characterised the earliest homes. The structures were positioned to shed rain and take advantage of the prevailing winds, and many of the components were prefabricated, then fitted together with wooden pegs.

Over time, the houses were raised higher on stilts to protect the home from flooding and wild animals, while creating a space beneath the house for keeping livestock or to be used for daily work such as weaving. Such homes are common in villages throughout Thailand today, although, in urban areas, nearly all houses are more Western in design and steadfastly anchored to the ground with brick and mortar. Most of the early homes were made of native woods such as teak, which is rarely used today as it is expensive and hard to come by, or bamboo, which is making a small comeback as it is eco-friendly. Jim Thompson’s House, Suan Pakkad Palace and Kamthieng House are fine examples of grand Thai houses. Numerous, albeit humbler, examples line the banks of the canals that crisscross Bangkok’s Thonburi suburbs.

In south Thailand, a different design evolved, featuring shorter pillars, no exterior veranda, and windows with hinged shutters that closed from the top during torrential monsoon rains. 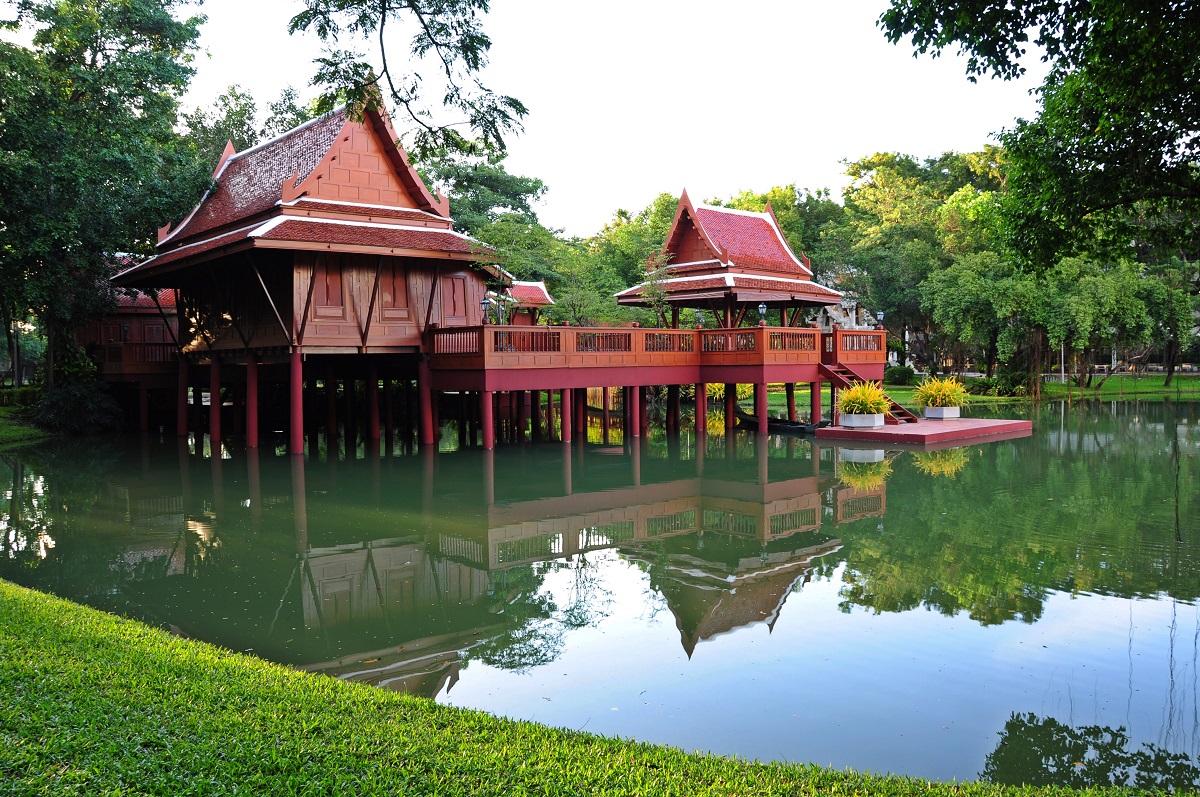 With the arrival of Western traders and missionaries in Bangkok in the 18th century, elements of Western architectural design started to make an appearance. This was further bolstered by trips to Europe by the Thai monarchy in the 19th century. By the mid-19th century, Western-style buildings were being built alongside traditional Thai structures on both sides of the Chao Phraya River, the centre of Bangkok’s government and commerce.

Some of this early architecture still stands today, including the original Author’s Wing of the Oriental Hotel as well as the French Embassy, the East Asiatic Company and the Old Customs House, all designed by European architects and found within walking distance of each other along the riverside near Thanon Silom. The Vimanmek Mansion, in Bangkok’s Dusit district, built entirely of teak but decidedly more Western than Thai, the monumental Grand Palace,  with its Western neoclassical features, and the Italianate palace built by King Chulalongkorn at Bang Pa-In, near Ayutthaya, offer ample evidence of Thailand’s passionate embrace of Western styles, which continues to this day. Insight Guides' Bangkok Sustainable Trails holiday explores the city's history and architecture: review the itinerary for yourself online now.

Another legacy of this era are the shophouses built in the Sino-Portuguese style. These narrow and long two-storey linked buildings with ornate window and roof treatments can still be seen near the Tha Chang boat landing along the Chao Phraya River in Bangkok, as well as Thanon Thalang in Phuket and Thanon Charoenrat in Chiang Mai. As in the past, the ground floor of the structure serves as a shop, while the family lives on the floor above. 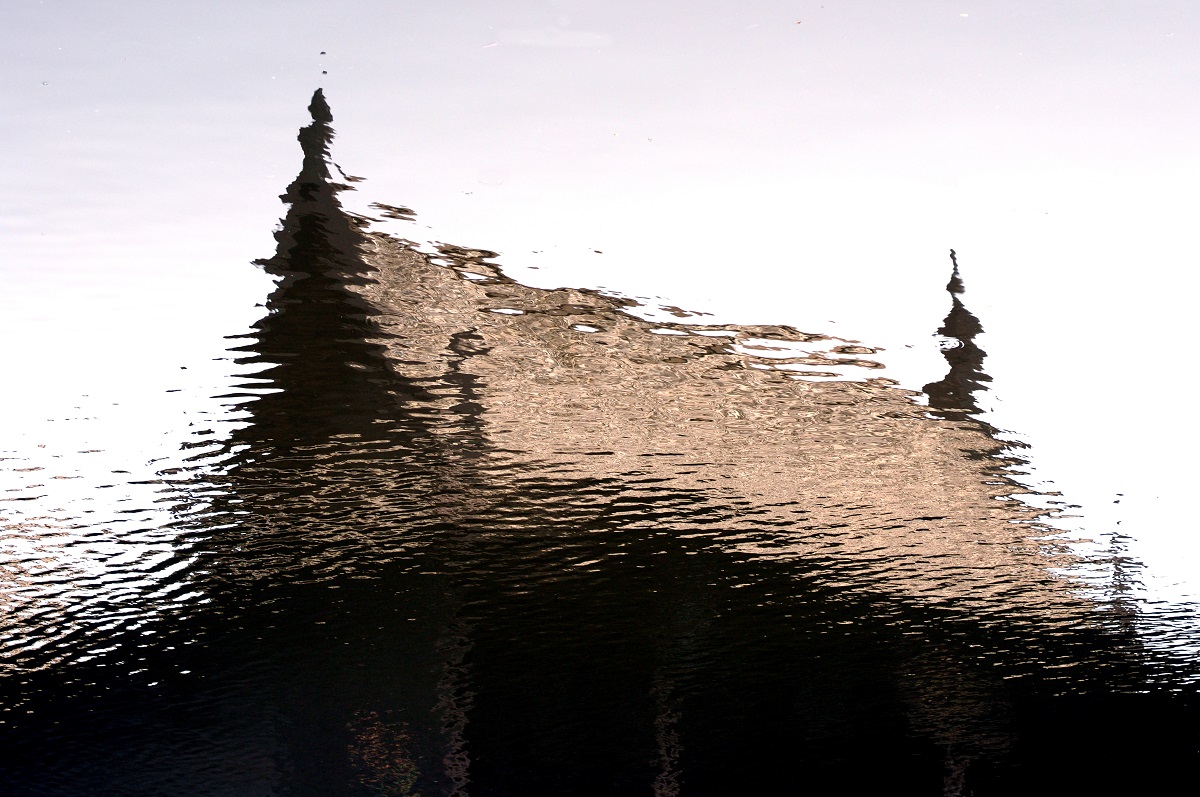 Most contemporary architectural efforts show little regard for the past. Hundreds of functional high-rises appear each year in the cities, while cardboard-copy rows of townhouses are erected for the country’s growing middle class in the suburbs and small towns. During the building boom of the 1980s and ’90s, many architects tried to outdo each other and some fairly quirky designs evolved in Bangkok. Some of the more successful designs include the UOB Building at the corner of Thanon Sathorn and Soi Pikun, designed by one of the country’s foremost modern architects, Dr Sumet Jumsai. It looks more like the creation of a child’s fantasy than a stuffy bank headquarters, and, complete with eyes and antennae, it is affectionately dubbed the “robot building”. The robotic appearance is a symbol of modernisation in Thai banking.

Also of note in the north Bangkok business district at Soi Pahon Yothin is the whimsical Elephant Tower, which has three towers connected to form the shape of Thailand’s national animal, while the extraordinary 314-metre (1,030ft) -high MahaNakhon skyscraper, due to complete in 2014, will have a “pixelated” exterior that resembles uneven stacks of glass Lego bricks. It will house the Ritz-Carlton residences.

In 1997 Bangkok’s then tallest building, the 90-storey Baiyoke Tower II, on Thanon Ratchaprarop, was completed, with a revolving observation deck on the 84th floor that provides an eye-popping 360-degree view of the city. Since then, rooftop panoramas, usually accompanied by wining and dining, have become a major feature of the city, as seen from the hotel Lebua at State Tower, on Thanon Silom.

Since the 1997 crash, economic stability has largely returned to Thailand, and today, as well as the creation of new buildings clad in steel and glass, there is a greater awareness of conservation, as seen in the 2011 restoration of the shop houses opposite Bangkok’s Grand Palace.

Some old residences have been restored and converted to boutique hotels or museums, and another trend is the construction of luxurious new hotels consciously designed to incorporate or recreate traditional Thai aesthetics. One spectacular example is the Mandarin Oriental Dara Dhevi in Chiang Mai.

Unfortunately, much of this is well hidden by the post-1970s surroundings and Bangkok, in particular, remains a mix of beauty and beast.

Ready to take your trip to explore Thailand's architecture?

Looking for more information on Thailand?

How to spend a perfect day in Bangkok

A local's guide to the best of Bangkok

Plan your trip: Top 5 places to spend Christmas in Thailand

We had the most incredible journey - a real once in a lifetime type of experience!