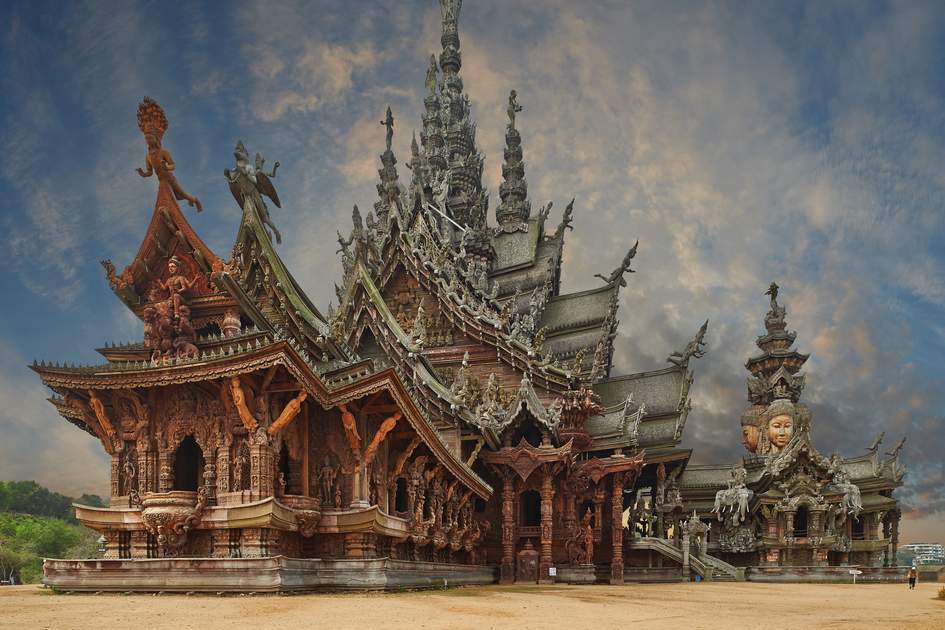 Over 90% of Thailand’s population of 67,000,000 are Buddhist. Temples, or wats, play a very important role in Buddhism and Buddhist culture, as they provide a centre for the local community where Buddhists can go to chant and meditate. With so many Buddhists in Thailand, there are around 40,000 temples in the country, 30,000 of which are in use today. Visiting temples is a unique, family friendly way to experience Thai culture firsthand. You must remove your footwear before entering a temple in Thailand. To save you the time of visiting all 40,000, we’ve drawn up a list of five must-see temples in Thailand, from the ancient to the contemporary.

With over 400 temples to explore, Bangkok is something of a Mecca for temple enthusiasts. It wasn’t easy picking just one for this list, but Wat Arun just sneaks in ahead of Wat Pho and Wat Phra Kaew. As the most iconic temple inBangkok, Wat Arun sits proudly on the Thonburi side of the Chao Praya River, opposite Wat Pho and the Grand Palace. The temple itself consists of a tall, central, Khmer-style tower called a ‘prang,’ which is surrounded by four smaller towers. Visitors can climb the steep steps to the balcony in the central tower. At night, the temple is illuminated by a yellow-gold light, and is spectacular to behold at sunset, despite its name. 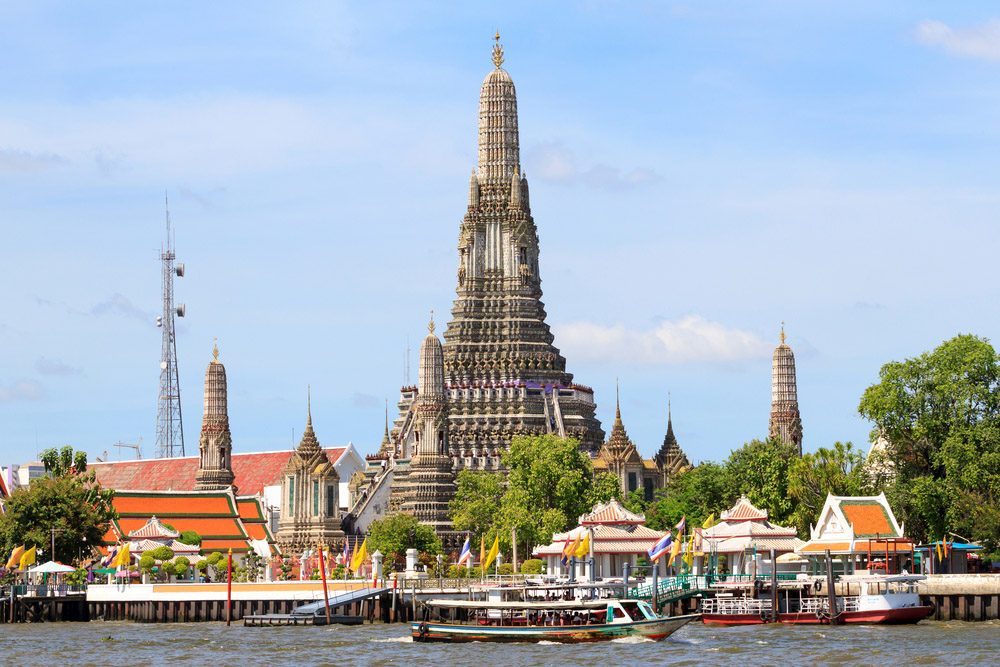 The province of Sukhothaiis around 400km (250 miles) to the north of Bangkok. Around 12km (7.5 miles) to the east of region’s capital (New Sukhothai) lies the impressive complex of 13th- and 14th-century temples at Sukhothai Historical Park. The whole area is now a UNESCO World Heritage Site, and many of temples have been partially restored. There are 139 ruins spread over 70 sq-km (27 sq-m), with the impressive Wat Mahathat sitting proudly at the centre. Wat Mahathat, meaning temple of the great relic, is believed to have been the central temple of this ancient city. The main part of the temple is shaped like a lotus flower and inscribed with 168 meditating Buddhas at its base. Many traditional Thai historians believe that the ruins at Suhkothai mark the beginning of the Kingdom of Thailand, although some dispute this. 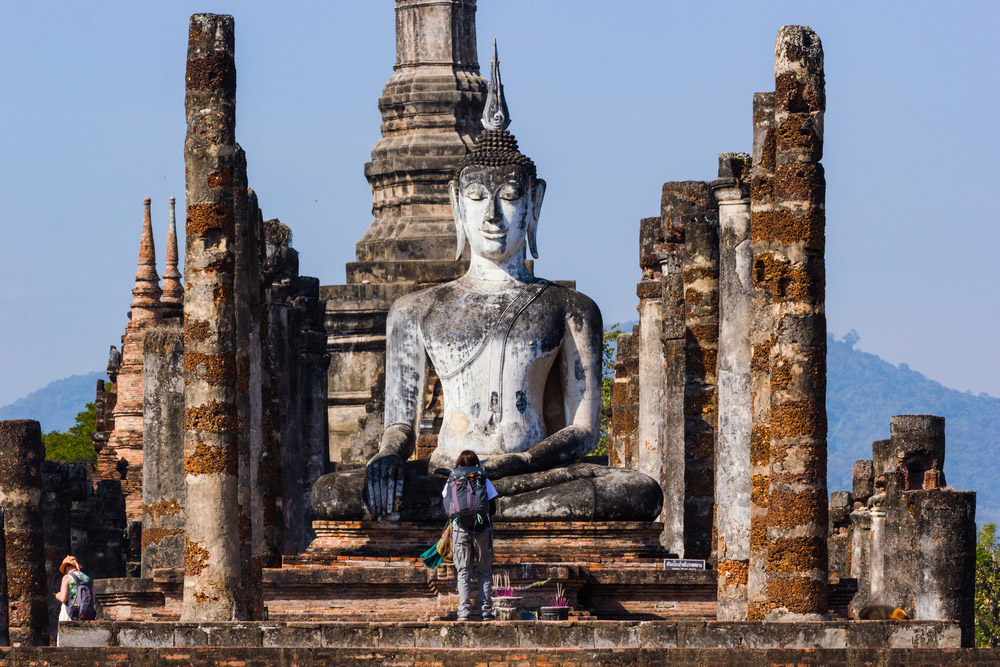 Discover more temples and cities with our Thailand Discovery Tour

Wat Rong Khun in Chang Rai is, to an extent, the odd one out on this list. The temple itself is of little to no religious significance and construction began as late as 1998. Designed by Thai architect Chaloemchai Khositphiphat, the White Temple is completely unique: the whitewashed walls adorn Buddhist philosophy, riddles and contemporary sculptures and paintings, which often provide a political comment. In one section, a large mural depicts the devil with George Bush in one eye and Osama Bin Laden in the other. To access part of the temple, you must cross a bridge over a sea of sculpted human hands reaching out from a pit beneath. The temple’s unorthodox design does not detract from its beauty: the effect of the whitewashed main structure makes you feel like you’re in a surreal fairytale. 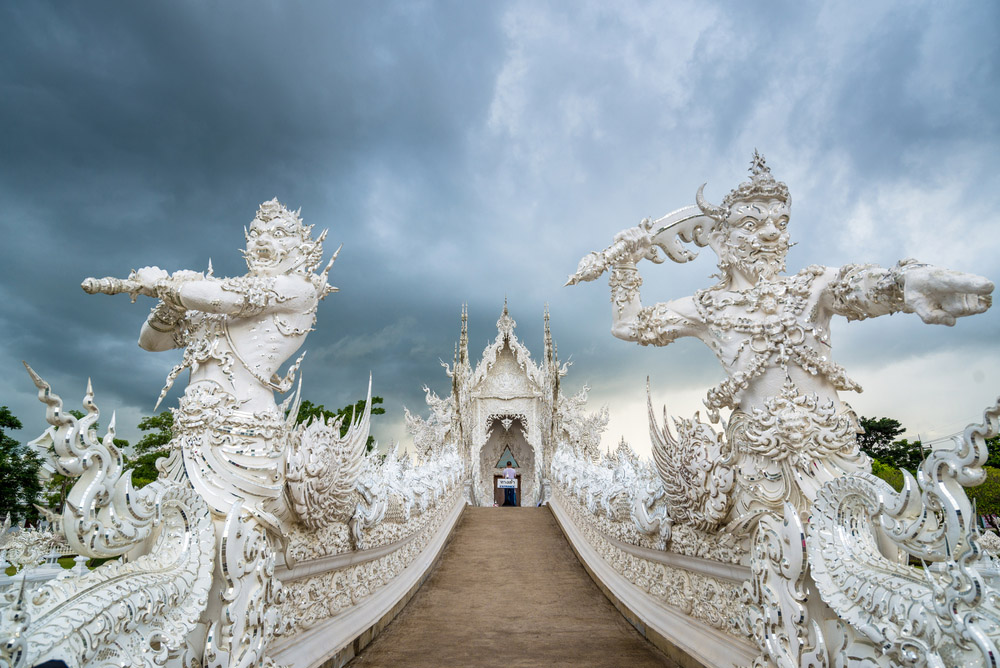 Staying in northern Thailand, the next temple is Wat Phrathat Doi Suthep, which can be found in the hills near Chang Mai. From the car park, there are 309 steps to climb to get to the temple. Alternatively, there is a shuttle tram service available. Once at the top, an awe-inspiring temple complex, with clear Hindu and Buddhist influences, is your reward. There is an impressive golden mount at the centre, known as a stupa, and intricately carved dragons lining the entrance. There are also grand statues of the Hindu god Ganesh, and the Emerald Buddha. The view over Chang Mai is equally as spectacular. 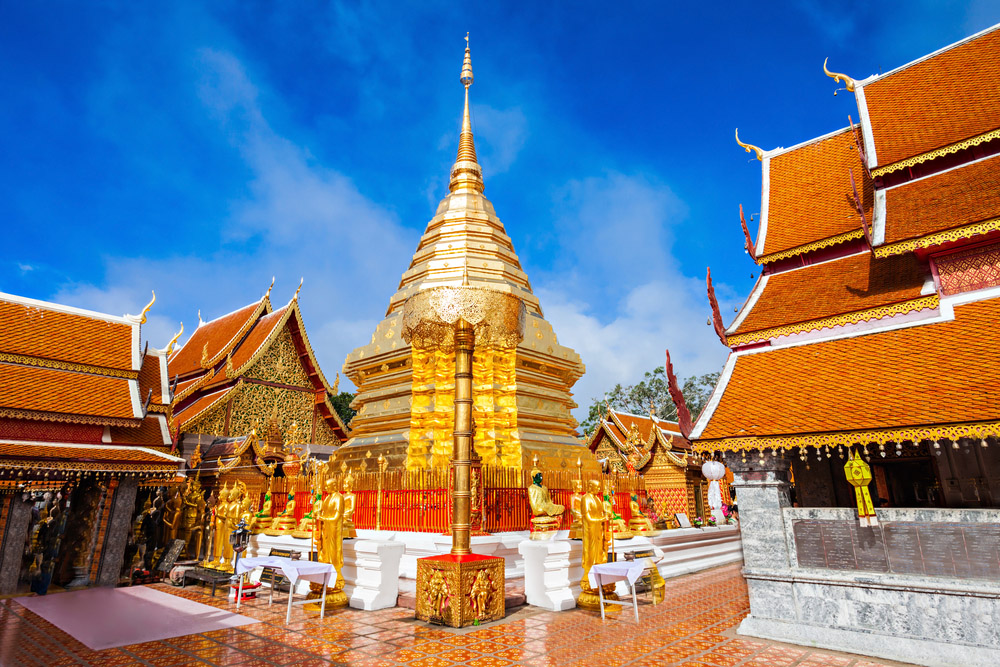 About a two-hour drive southeast from Bangkok sits the city of Pattaya. Although not known for its temples, Pattaya is home to one of the most distinctive temples in Thailand. Much like the White Temple, the Sanctuary of Truth is a modern undertaking with little or no religious significance, although both Buddhist and Hindu patterns and designs are both replete in its design. The Sanctuary of Truth was made entirely by hand from teak wood. Incredibly, not a single nail was used in its construction. The temple’s setting – right on the shore – is nearly as spectacular as the level of detail that has gone into all the carvings and patterns. It's well worth making the journey to Pattaya, even if you go straight back to Bangkok after. 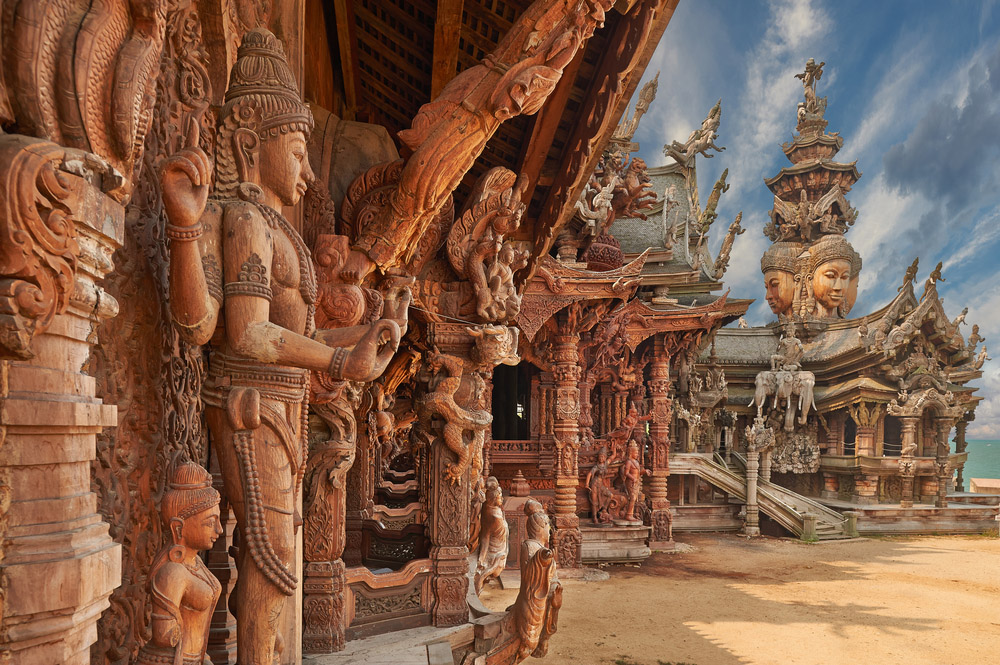 Excellent job planning the activities we wanted. The guides were top quality and rough guides were able to adjust to a last minute change in our plans. It was an experiment - a big trip for our first outing with you but we were generally very pleased... Read more

I came across the service by chance and what a delight. What followed was a tailor made holiday where you do what you want to do and be shown places you never knew existed. A guide and a driver in every city you visit and where needed a very local experienced guide for trekking. Top hotels at discounted rates. We really felt like royalty from the time we landed to the time we were dropped off for our journey back home. We started by advising which countries we wanted to visit, how much time we had, how fit we were (or unfit for me!) and our budget. I could not believe just how much more we received than what I thought our budget would give. We are taken on walking/cycling/quad biking/vespa/boat sightseeing trips across the length of Vietnam. An overnight boat trip to magnificent limestone formations. Trekking in the jungles of Vietnam, Cambodia and Laos. Numerous waterfalls. The great temples of Angkor. Overnight stays with villagers in the mountains to experience wonder. A night with the wildlife rescue centre. All internal flights booked for us. Amazing guides who went out of their way to help wash our clothes cheaply and save hotel costs or ensure we got free upgrades! To list all the kindness we were shown at absolutely every stage of the holiday would take a novel to write. In essence we did what felt like a lifetime of holidays in 2.5 weeks meticulously planned for us behind the scenes but which flowed effortlessly from day to day. And we didn't have to share. This was a holiday for me and my daughter pre her leaving for University. My poor level of fitness was totally taken into account and although I found it challenging, it wasn't impossible. On the penultimate day a trek was shortened as I was struggling. Within minutes an alternative plan with a shorter trek and 20km of kayaking was organised and a 5* hotel was booked for that night. Also as it was tailor made, I was able to opt out of the last hike on the day we were flying back home and instead swam in the waterfall pool whilst my daughter went on the hike. There was great flexibility in the itinerary if needed. Our organiser, Vy, was always on whatsapp for immediate contact. We have barely returned and are already considering our next holiday with this service. You get the best of everything without the 'package holiday' issues where you have to do some things you wouldn't normally want and have to wait for everyone. Our trips were never shared with anyone apart from when we went on the overnight boat to Halong Bay. Thank you all for an amazing experience. We'll be in touch soon. For anyone considering a trip I would really get them to quote. I have previously done tailor made breaks and paid a lot more for a lot less!