In depth: The best festivals in Myanmar 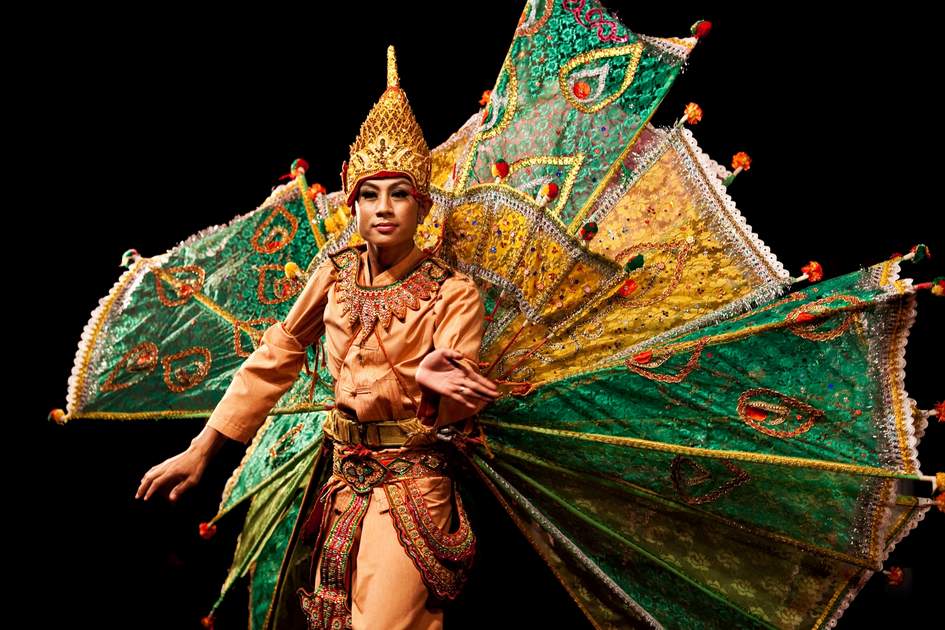 Myanmar’s festive events range from solemn Dhammasetkya, marking the beginning of Buddhist Lent, through to the manic Thingyan water festival and the incredible Thadingyut festival of lights.

Myanmar’s festival year is based on the Buddhist lunar calendar, which determines the dates of festivals and Buddhist holidays beginning with Thingyan, the Burmese New Year, in April. Whenever the full moon waxes, it’s time for a pwe, or festival, of one sort or another. Some pwe are solemn; others are occasions for fun and frivolity. All are well worth experiencing...

In Kachin State, the predominantly Christian minority people celebrate their annual thanksgiving ceremony in early January with masked and costumed Manao dances around a decorated pole – a celebration to placate Kachin nat and ensure peace, plenty and prosperity. It’s difficult to predict with any accuracy the exact date on which a manao may be held, the decision being taken by the duwa (Kachin elders). The sup manao looks to the future, while the padang manao celebrates a past success or victory. The festival involves the sacrifice of cattle or buffalo to placate and honour the nat, with traditional Kachin music and dance centred around a manao taing (totem pole). A manao may go on for 24 hours, and a lot of locally brewed alcohol is drunk. The biggest manao is held in January at Myitkyina, the capital of Kachin State, to celebrate Kachin State Day and bringing together all the various branches of the traditional Kachin tribe for a week of dancing, games and all-round merriment.

Tabaung, the last month of the traditional Burmese year (March/April), is considered a time of romance and tranquillity. On the full moon day of Tabaung, Burmese travel to lakes or rivers where they play music, sing and recite poetry, often in the company of a loved one.

The beginning of the hot season in April is celebrated with the mammoth Thingyan (“changing over”) water festival (April 13–16). Myanmar’s biggest party, Thingyan celebrates the Burmese New Year, traditionally held on the full moon day of the lunar month of Tagu (although dates are now fixed according to the Western calendar). The festival goes on for three or four days, the length of the celebration determined by ponna or Brahman astrologers. Water is poured from buckets, sprayed from water pistols and hoses, and even blasted from fire hydrants to wash away the old year and welcome the new. The drenching stops each day at 6.30pm, and is followed by an evening of feasting and partying. For the duration of the festival, government buildings and businesses are closed and pretty much the entire country shuts down.

Pandals – pavilions or stages made from bamboo and beautifully decorated with flowers and papier mâché – are erected in which lines of garlanded girls dressed in identical suits of colourful material perform carefully rehearsed song and dance routines while boys douse them with water. More overtly suggestive versions spring up in the liberal, upper-class neighbourhoods of Yangon, where hot pants, crop tops and Western-style dancing replace the traditional elegance. Discover Yangon with Insight Guides' Myanmar Highlights trip. 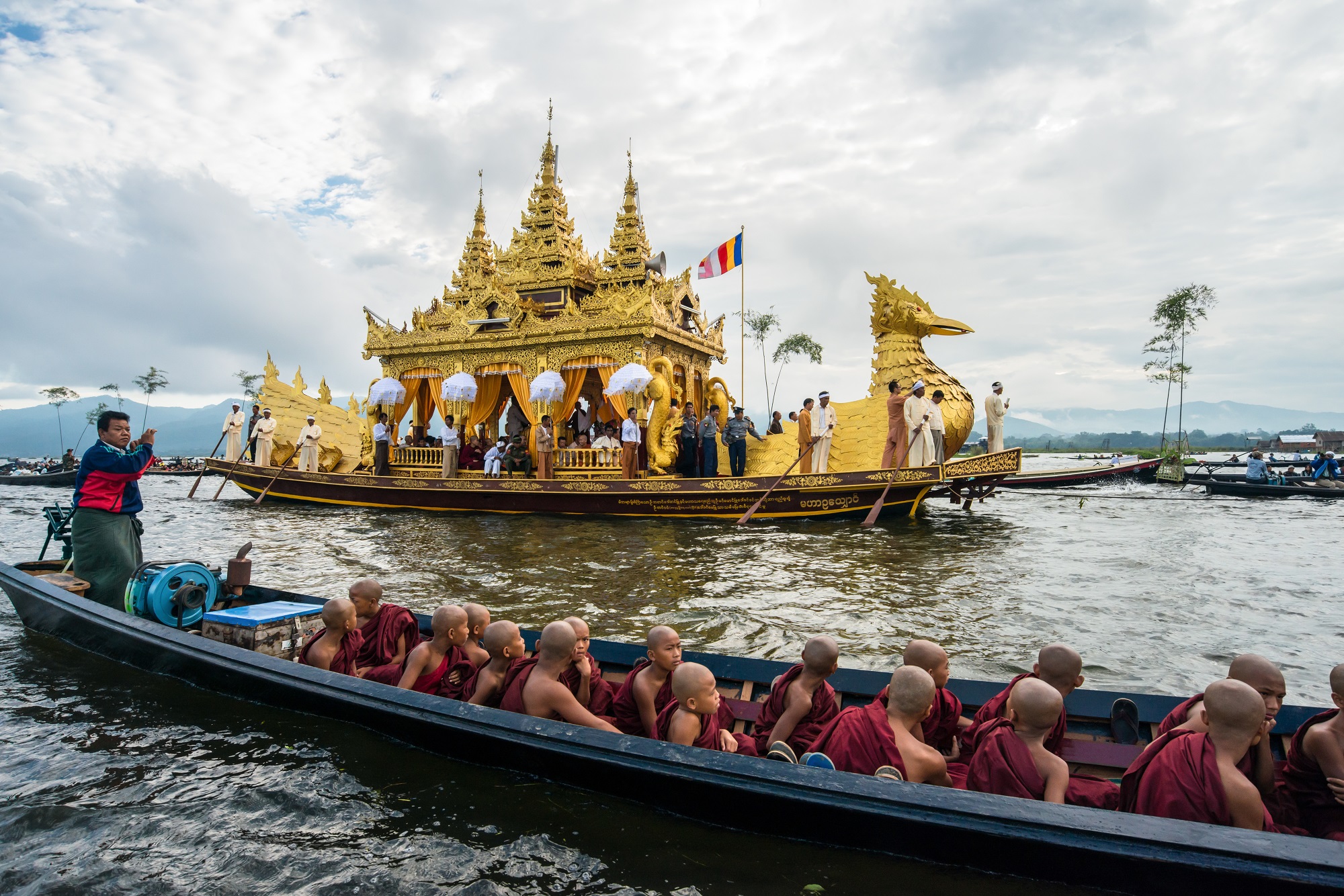 Thingyan also celebrates the descent to earth of Thagyamin, the king of the 37 nat, to bring blessings for the new year. He brings two books with him: one bound in gold to record the names of children who have been well-behaved over the past year, and one bound in dog skin to record the names of any naughty children. Thagyamin rides a winged golden horse and bears a water jar, symbolic of peace and prosperity. Households greet Thagyamin with flowers and palm leaves at the front door. Guns are fired and music is played in salute. Gaily decorated floats parade up and down the streets of the cities and larger towns. But there are also moments of tranquillity in the midst of this exuberance. Most revellers find time to make offerings at pagodas and at the homes of their elders, and Buddha images are washed by the devout.

The full moon day of the lunar month of Kason (April/May) sees celebrations for the birthday of Lord Buddha (sometimes known as Vesak). Water is poured over the roots of sacred Banyan trees, beneath the branches of which the Buddha attained enlightenment. At the full moon, the birth, enlightenment and death of the Buddha are celebrated. The devout join a procession of musicians and dancers to the local pagoda.

During the full moon of Nayon (May to June), after the rains have begun and the hot, dry months are at an end, Burmese students are tested on their knowledge of the Tripitaka (the Buddhist scriptures). Abbots lecture before large crowds, schools operated by monasteries are opened to the public, and eminent scholars exhibit their knowledge to public acclaim.

The full moon day of the month of Waso (June/ July) marks the arrival of Buddhist Lent, celebrated with the festival of Dhammasetkya, a solemn religious occasion, marking the beginning of a period during which all monks go into a period of deep retreat for study and meditation. This is also an auspicious time for young men to have their shinpyu initiation into the monk-hood. For the next three months, the country is soaked in water as the monsoons gain strength. During this time, monks are not permitted to travel, and the devout will enter a period of fasting. Take a tailor-made trip to Myanmar, and experience Buddhist Lent for yourself. 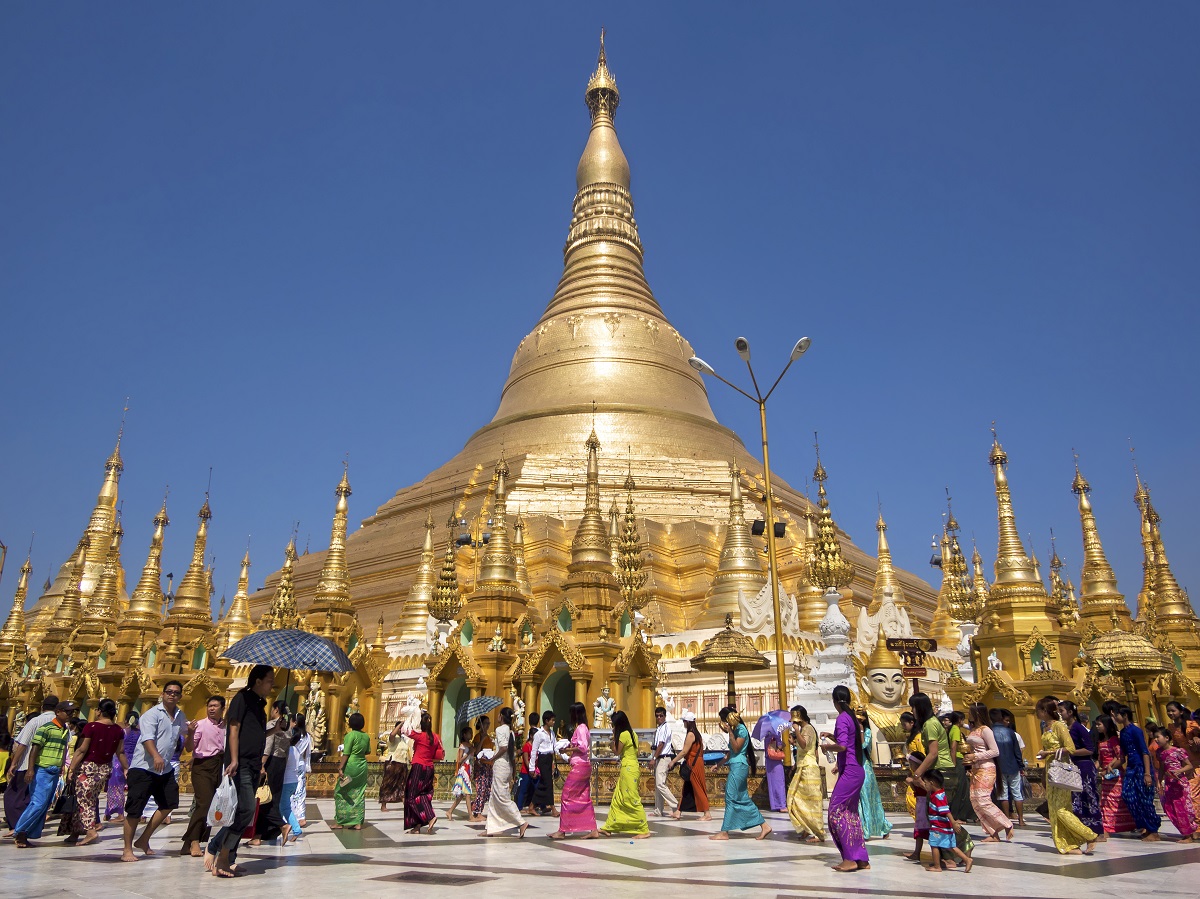 The month of Wagaung (July/August) is celebrated with the Maha Dok (“Draw-a-Lot”) Festival. Since no marriage or other secular celebration is permitted during Buddhist Lent, the full moon day of Wagaung is observed as a festival of merit-making. The name of each member of the local sangha is written on a piece of paper, which is then rolled up and deposited into a large basket. A representative from each household of the community draws a slip of paper from the basket, and, the next day, provides an elaborate feast for the monk named on the piece of paper. One layman will have drawn a paper containing the name of the Gautama Buddha and he has the honour of hosting the Buddha.

By mid-September the rainy season is at its height, and Myanmar’s waterways, from the mighty Ayeyarwady to the smallest stream, are full. To celebrate this bounty, Tawthalin (boat races) are held all over the country. The most impressive take place in Shan State, at the Phaung Daw U Festival on Inle Lake. Explore Inle Lake as part of Insight Guides' Myanmar Discovered trip.

Heralding the end of Buddhist Lent and the approach of the cool season, the Thadingyut festival of lights (October) celebrates the Buddha’s return from heaven to earth after preaching to the gods, ushering a period of weddings and other secular celebrations. To symbolise the radiance of the Buddha on his return, millions of candles and oil lamps illuminate monasteries, pagodas, houses and trees throughout the land.

The festival of Tazaungmone (the Weaving Festival) takes place between October and November. Under the full moon, unmarried women work at their looms all night to make new robes for the monks. These are then presented to the monks at the local temple early next morning. 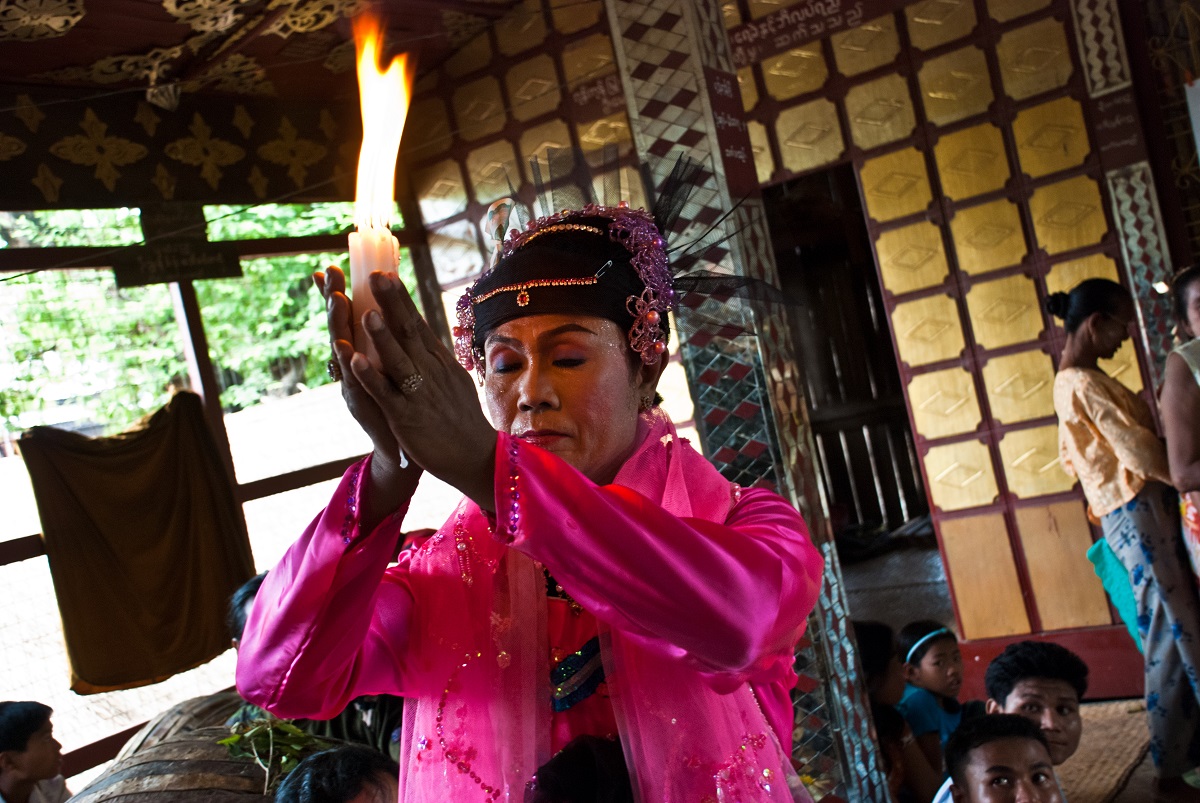 The full moon day of the month of Nadaw (November/December) is dedicated to celebrations to the spirit world and is when most nat festivals take place, including the raucous Taungbyon Festival, held in the town of Wagaung, north of Mandalay. Some major nat celebrations are also held at other times of year, including the Mount Popa Festival, held during the month of Nayon (May/June) and the traditional Shan Festival in Kyaukme, held during the month of Tabaung (February/March).

Pyatho (December/January) is the month of temple festivals. This was formerly a time when Burmese royalty displayed its strength with military parades, although today it’s reserved mostly for local pagoda festivals (including the massive Ananda Temple festival in Bagan). These are partly religious, with gifts presented to monks and offerings made for temple upkeep, and partly secular, with impromptu markets set up around temples accompanied by plenty of eating and drinking, performances of music and dance, plus the occasional boxing match.

The Kayin New Year (December/January) is a time of vibrant celebration amongst Kayin communities throughout Myanmar, but especially in Kayin State and the Ayeyarwady Delta.

National holidays of a secular nature are dated according to the Western (international) calendar. Independence Day, a secular holiday, is held on 4 January and celebrated with week-long festivities. Boat races are staged on Kandawgyi Lake in Yangon and the palace moats in Mandalay.

On 12 February, Union Day marks national unity with flag-bearing and other celebrations. Peasant’s Day is celebrated on 2 March, and on 27 March, fireworks and parades mark the annual Armed Forces Day, The first day of May is Worker’s Day, and 19 July is Martyr’s Day, which commemorates the assassination of Bogyoke Aung San and his comrades in 1947.

Other widely celebrated festivals include Diwali, the Hindu festival of lights, as well as the Muslim celebrations of ’Id al-Fitr to celebrate the end of the fasting month of Ramadan, Maulid al-Nabi to commemorate the Prophet Muhammad’s birthday, and ’Id al-Adha to celebrate the conclusion of the annual Haj Pilgrim- age to Mecca. The Chinese community mark (discreetly) Chinese New Year, the Festival of Hungry Ghosts and the annual Moon Cake Festival, while Myanmar’s Christians celebrate Christmas and Easter.

Get in touch and tell us exactly what you want from your trip to Myanmar. We'll match you with a local expert who can plan, organise and book your entire holiday for you. Alternatively, browse existing itineraries online.

This article was originally published on May 27, 2016

Want to see these festivals for yourself? Take a look at our favourite holidays below:

Uncover a trip to Myanmar for an adventurer

Experience the best of Myanmar on this trip of a lifetime

We've been tremendously happy with our trip so far and you dealt with all problems quickly and smoothly. Very much appreciated! Btw our stay at Coral Redang was exquisite. I wish I never had to leave that beach.