Highgate to Sleepy Hollow: spooky cemeteries of the world 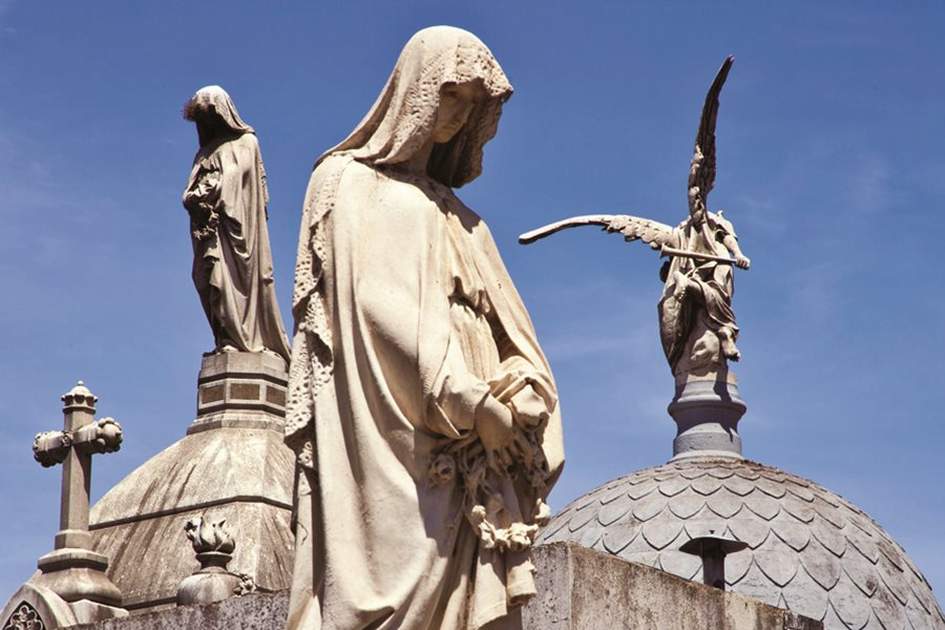 Visiting a cemetery as part of your travels is not as strange an idea as you may think.

The places chosen to hold their graves can tell you a great deal about the destination you are visiting. There is something magical about these spaces; the history that each inscribed gravestone holds, the architecture, the mysteries and superstitions that are usually hidden, can feel close to the surface as you wander the paths.

As an oasis of calm in some of the busiest cities in the world, they also harbour wonderous wildlife and make a perfect place to refocus yourself during the chaos of travel.

Here are some of Insight Guides' recommendations for interesting cemeteries across the globe. 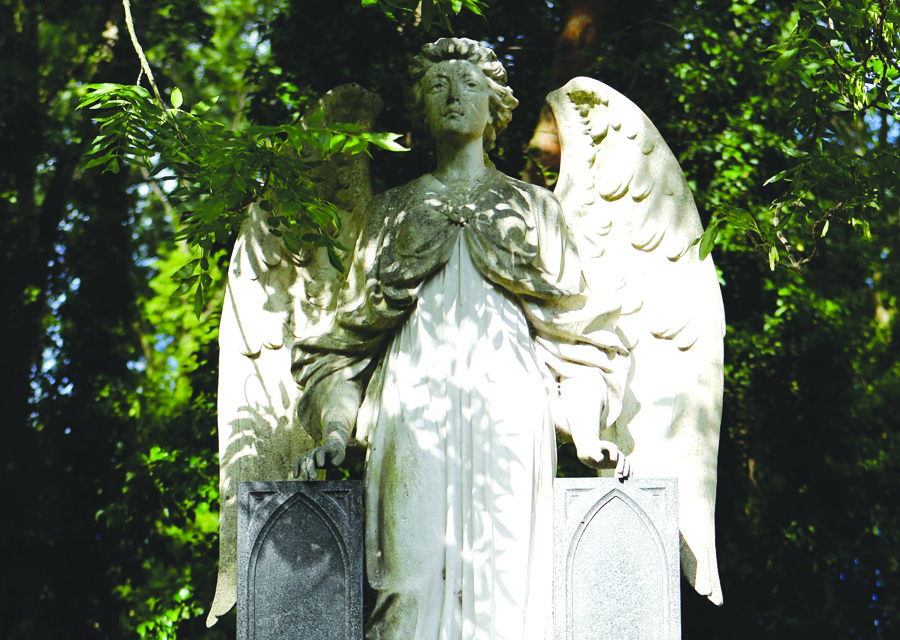 As London expanded in the early 19th century, the matter of where to bury the dead became a pressing problem. A number of new cemeteries were therefore built on the city’s outskirts, including, in 1839, the western section of Highgate Cemetery. In 1854 the cemetery was expanded when another section was opened on the eastern side of Swain’s Lane. The eastern cemetery can be visited independently, though guided tours are available. The western section, across Swain’s Lane, is more atmospheric but it can only be visited on one of the one-hour guided tours.

These quintessentially Victorian cemeteries are noted for their grandiose mausoleums (many listed structures) and statues, artfully covered in creepers and set amidst wild flowers. One of the chief attractions is the rather grim bust of Karl Marx, who was buried in the eastern section in 1883. There are some 850 notable people buried in the two cemeteries, among them the novelist George Eliot, members of the Rossetti family, scientist Michael Faraday and novelist Douglas Adams, whose poignant memorial takes the form of a jar of pens left by fellow writters. 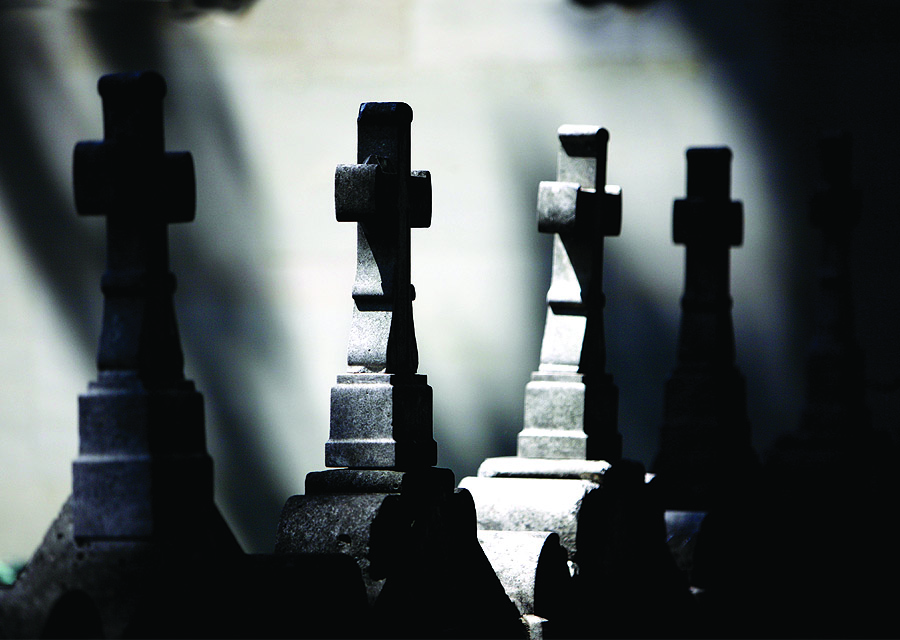 The great tourist draw in the east of Paris is this giant cemetery, an oasis of peace in the city. The list of famous people buried here reads like a who’s who of the city’s history – Abélard and Héloïse, Apollinaire, Balzac, Edith Piaf, Oscar Wilde, Molière, Proust, Gertrude Stein, Sarah Bernhardt, Chopin and, of course, Jim Morrison, the cemetery’s most visited grave, manned by a stony-faced attendant. You can get a free map at the entrance, or purchase a better one from shops that border the cemetery or sellers by its gates.

A little to the south is another graveyard that’s much less known, yet just (in its way) as interesting: the Cimetière de Picpus. It’s part of a still-functioning convent, so privately owned, and houses the bones of thousands guillotined in the Revolutionary years: 1,298 of the 1,306 people executed in nearby Place du Trône (now Place de l’Ile-de-la-Réunion) in July 1794 are here; the plots still belong to the families of the original victims. Off a lovely walled garden is “the cemetery of nobility”, with family plots belonging to the Chateaubriands, La Fayettes (the tomb of the general is draped with an American flag due to his involvement with the American Revolutionary War), Montalamberts, Crillons, La Rochefoucaulds and more. There are also two mass graves, discovered in 1929, in one of which are the bones of the poet André Chénier. As you walk around, or sit in the little chapel, you may encounter nuns in white lace bonnets – and feel as if Paris is very far away. 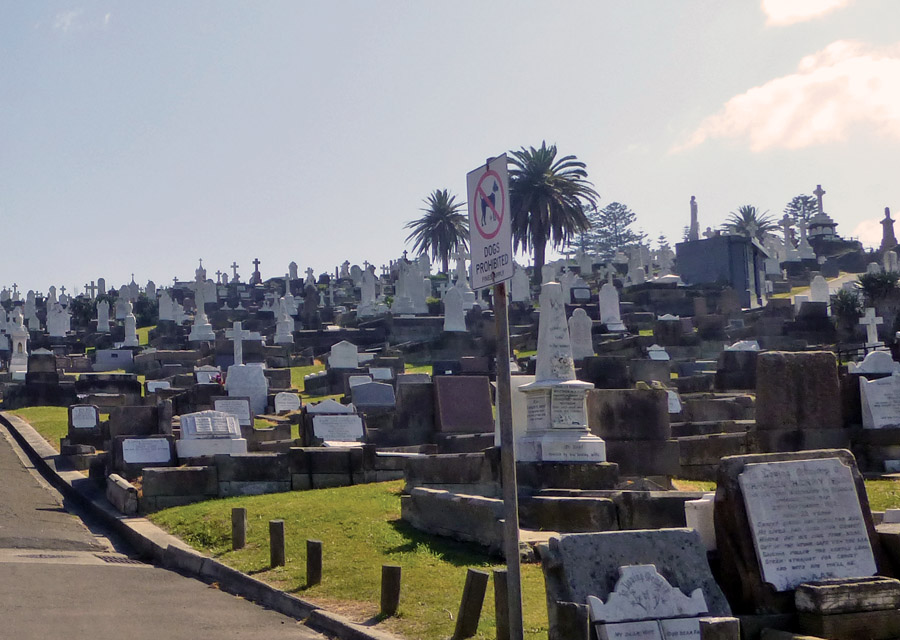 Perhaps the runaway winner in the 'best locations' list, the Waverley Cemetery, perched high upon the cliffs of the eastern suburb of Bronte in Sydney, certainly would take some beating. Overlooking the Tasman Sea and a mere stone's throw from the noted Bondi and Coogie beaches, the residents of the graveyard are amongst the first to catch the morning sun as it rises above the Pacific Ocean. Notable for its Victorian and Edwardian gravestones, Waverley is home to many famous Australians including poet Henry Lawson. 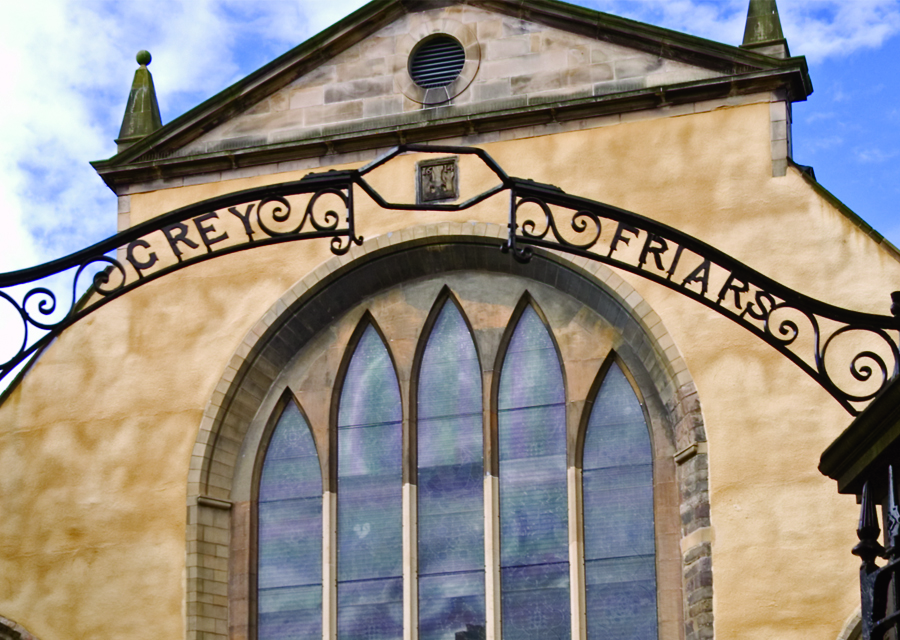 This quiet, unassuming graveyard in the heart of the beautiful city of Edinburgh has become notorious for creepy goings-on and strange events. The stories tell of numerous physical attacks and an ominous air, with the blame placed upon the Mackenzie Poltergeist.

Sir George Mackenzie's graveyard was supposedly tampered with in the late 1990s which has released the vengeful spirit. Mackenzie himself seems to have a rather sullied back story; he was tied to the deaths of many hundreds of covenanters after the Battle of Bothwell Bridge, leading to his nickname, Bloody Mackenzie.

A good tale to spin at Halloween, but the local council took it seriously enough to temporarily close the area around his grave. 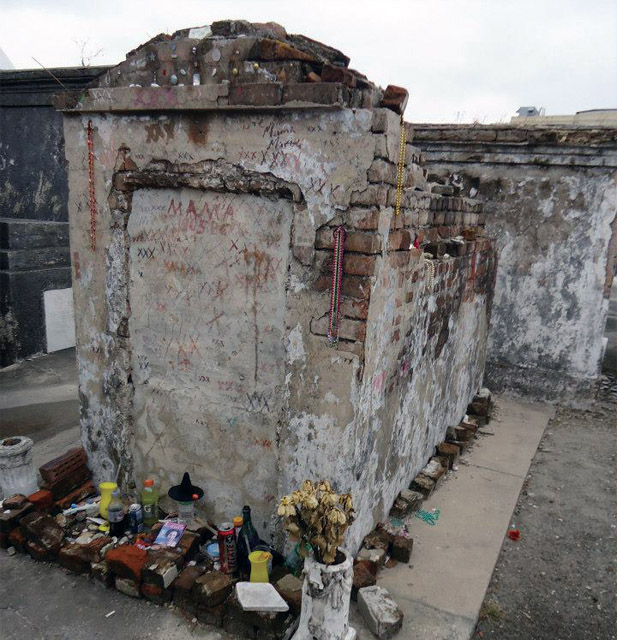 The early residents of New Orleans discovered that living below sea-level and surrounded by swamp-land presented a couple of difficulties with disposing of the dead. Available burial plots quickly filled up, and burials in the soft earth had a tendency to make a bid for freedom when the land flooded. The answer was the use of above ground stone tombs, creating rather impressive 'cities of the dead', such as St. Louis Cemetery No. 1. Despite being relatively small, many thousands of people have been buried here over the centuries, on account of the fact that the intense summer heat in Louisiana results in it only taking around a year for an entire body and coffin to decompose within a stone tomb.

A local law decreed that once a body had been interred, the tomb had to be sealed for at least a year and a day, after which time they could reopen it, brush whatever small fragments remained to the back of the tomb and place a new resident within. The voodoo priestess, Marie Laveau (1794-1881), is said to be buried there, and visitors will leave offerings and mark crosses on her tomb in the hope of being granted a wish, although beware that many mistake an incorrect tomb for hers, so you may wish to ask a guide to point out the correct place. Nicholas Cage has also purchased a plot and built a large pyramid tomb in St. Louis No.1, although I don't believe he grants any wishes. 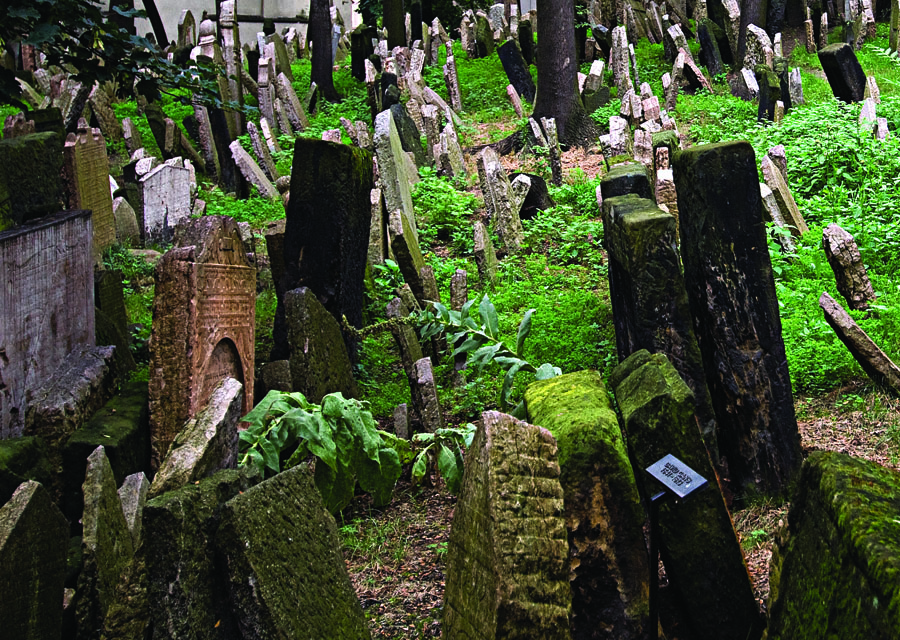 Josefov, the first Jewish community in Prague, was founded in 1091. Despite periods of oppression and laws restricting Jewish residents to a small area of the city, the community nevertheless flourished, becoming a focal point for Jewish culture in Central Europe. The Old Jewish Cemetery was formed within Josefov in the 15th century with burials continued here until 1787. The number of graves is much greater than the 12,000 gravestones would suggest – the true figure is probably closer to 100,000. Because this was the only place where Jews could be buried, graves were piled layer on layer.

The majority of the inscriptions on the stones are poetic texts of grief and mourning. The reliefs give the family name or emblem, and the profession of the deceased (scissors for a tailor, for example).The oldest monument in the cemetery is the tombstone of the poet Avigdor Kara, dating from 1439. Also buried here, in 1601, was the noted Jewish mayor Mordecai Maisel. But the most famous tomb is that of the great scholar Rabbi Löw (1525–1609), who supposedly created the legend of the Golem. 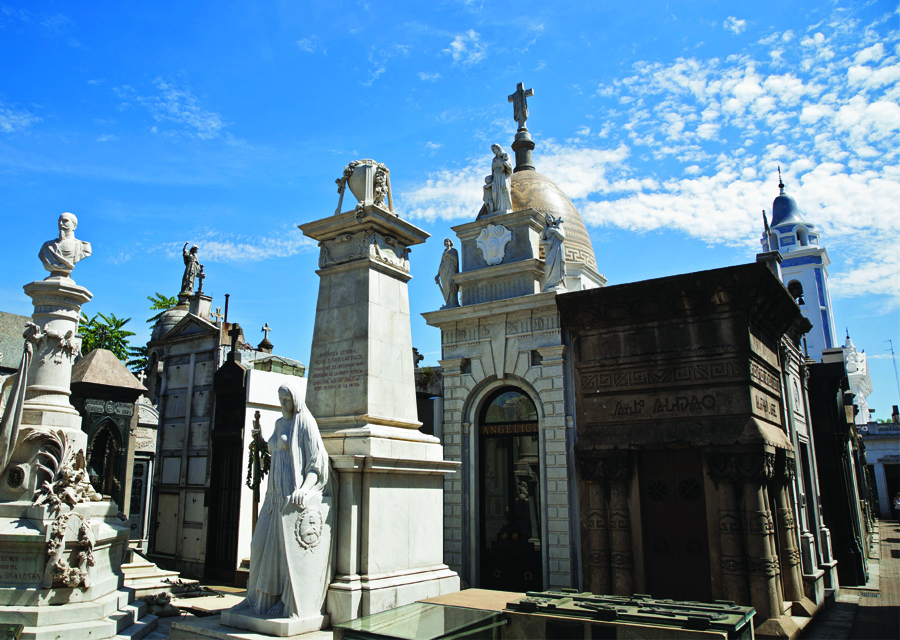 The Cementerio de la Recoleta is Argentina's burial ground for the rich, famous and powerful. Housing an astounding array of differing architectural styles it has the feeling of a miniature city mimicking the artistic history of Buenos Aires. The nation’s great leaders, as well as their enemies, are here, leading to some disagreement about who is and who should be buried here.

For example, one of the most visited tombs is that of Evita Perón. Despite the fact that she is listed in the cemetery’s own map-guide, tourism officials have been known to deny that Evita is buried here, explaining that she is not of the “category” of people entombed in Recoleta. In fact, she is buried here with other members of the Duarte family, nine metres underground, in – according to urban myth at least – a booby-trapped tomb built to withstand a nuclear strike. (This sounds fanciful, but Evita’s corpse was spirited out of the country in 1955 by the military junta that overthrew her husband, not to return to Argentina until after Perón’s death in 1974.)

The name should be enough to send some shivers down the spine of many and these similarly named graveyards do little to dispel the unease.

The New York cemetery sits near the eastern banks of the Hudson in what was once a small farming town that has gradually become enveloped by the sprawling New York City. It is another small and beautiful place with some fascinating stonework and headstones. Many famous burials have taken place within the grounds including the man who put the area on the map, Washington Irving, author of The Legend of Sleepy Hollow. There are, of course, the obligitory supernatural stories, this time revolving around the Bronze Lady, who is seen to cry over an adjacent grave.

Further north, the Massachusetts cemetery is not as old, but has a wonderful landscape that includes much of the natural elements that existed prior to its creation.

To this day, the feeling of nature's presence is deeply anchored to the trees and bushes that fill the graveyard. 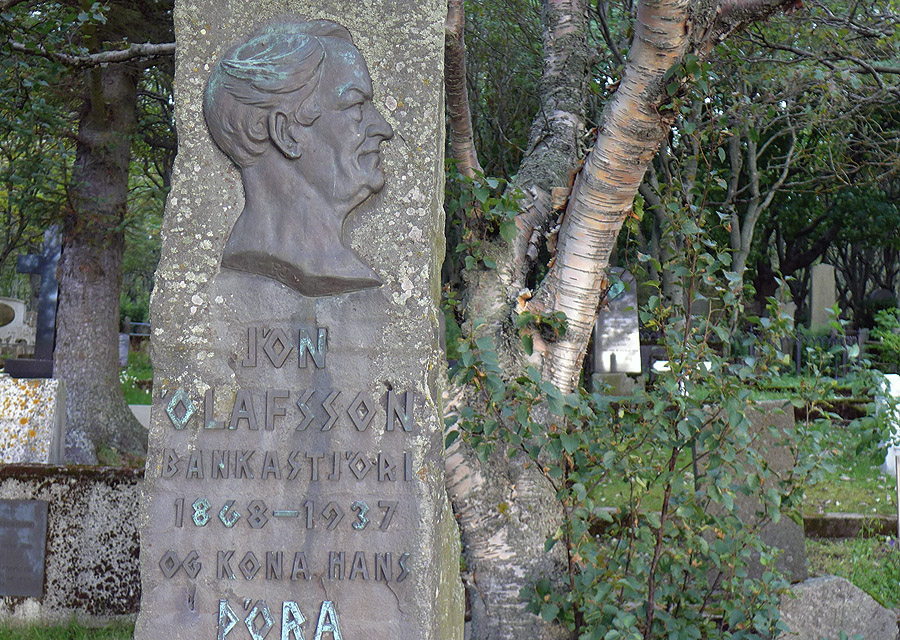 A quiet city cemetery sitting upon the hillside to the west of the Tjörnin, this wooded cemetery is a magical spot to visit if you are spending time in Reykjavík. In a country with so few trees it is a special moment to discover that many of the graves have birch and rowan trees firmly rooted within.

The cemetery is a haven for birdlife and a continued reminder of the importance of the environment to Icelanders. In Icelandic folklore, the first to be interred in a new cemetery becomes the 'Guardian of the Graveyard', whose responsibility is to oversee those who follow. In Hólavallagarður's case the 'Guardian' is Guðrún Oddsdóttir, the wife of a local magistrate.