Myanmar is one of the world's most popular up-and-coming travel destinations. However, many people are still unfamiliar with the country's main sites and attractions. Unfortunately, this can put people off travelling to this incredible country. Don't worry though: we have put together the perfect 10-day tour of Myanmar to get you started... 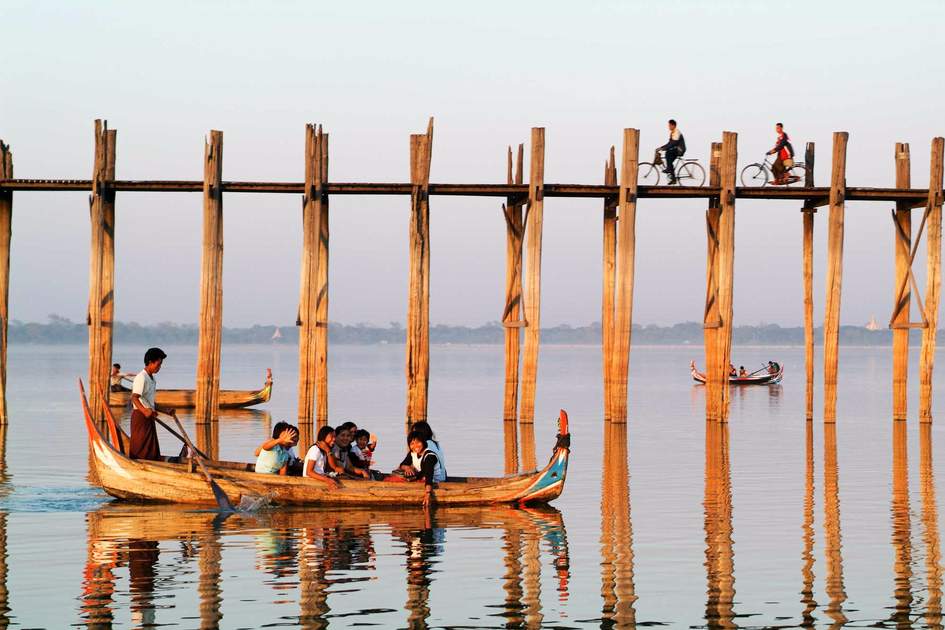 People walking on the wooden bridge of U Bein on river Ayeyarwad, Myanmar. Photo: Shutterstock
PrevNext

Myanmar, which is also known as Burma, is a sovereign state in Southeast Asia. In 1989, the ruling military regime changed the country's name from Burma to Myanmar. However, some countries didn't formally acknowledge the legitimacy of the regime. Said countries didn't recognise the name change either, which is why the country is still known by both names. To the west, Myanmar is bordered by India and Bangladesh; to the east, by Laos and Thailand; and to the north and northeast, by China. The neighbouring countries' influence is apparent across Myanmar's culture, from its food to architectural style. A country of around 54 million people (according to the latest census), Myanmar is around 90% Buddhist. Here is our perfect 10-day tour, designed to get the best out of this fascinating country...

Formerly known as Rangoon, Yangon was renamed during the 1989 name change that also saw Burma become Myanmar. Yangon lost its capital city status to Naypyidaw in 2005. However, Yangon remains Myanmar's most populated urban area, with around 5 million inhabitants. It is also the perfect place to start any tour of Myanmar. Yangon's airport is well serviced by numerous international airlines, so you should have no problems finding a flight. Spend a few days here acclimatising to the country and getting over your jet lag. The magnificent Shwedagon Pagoda is the main attraction in Yangon. Also not to be missed are the 2,000-year-old Sule Pagoda and Bogyoke Market. A guided tour of all Yangon's main attractions is included in Insight Guides' Mesmerising Myanmar trip. 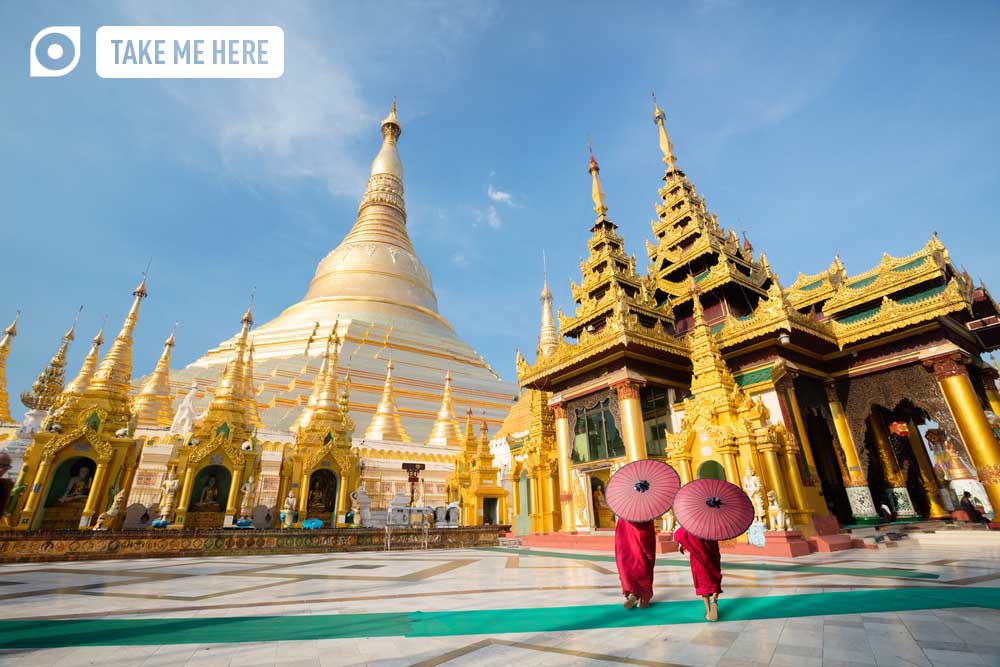 After spending a few days in Yangon, head north to Bagan. The easiest way to get to Bagan is by domestic flight. Bagan is famous for its medieval ruins, known as the Bagan Archaeological Zone. The dusty plains surrounding Bagan are home to some 2,200 temples and other religious structures. The temples are spread out over an area of roughly 50 sq km (26 sq miles). Hot-air balloon rides are a great way to see this area, and are becoming increasingly popular. As the sun sets, the dust in the air resembles a mysterious smoke, pierced by golden pagodas that point toward the golden sky, dotted with hot-air balloons. You've probably seen photographs of this iconic scene, which is typical of Myanmar. Enjoy a hot-air balloon ride over Bagan as part of Insight Guides' Myanmar Highlights trip. The Shwezigon Pagoda, built in the early 11th century by King Anawratha, is one of the finest pagodas in Bagan. Also well worth visiting is the Manuha Temple, which was built in 1059, and the Nanbaya Temple, a sandstone temple thought to be the former residence of King Manuha. Watch the sun set over the Ayeyarwaddy River from the the top of a nearby temple to cap off a picturesque day. 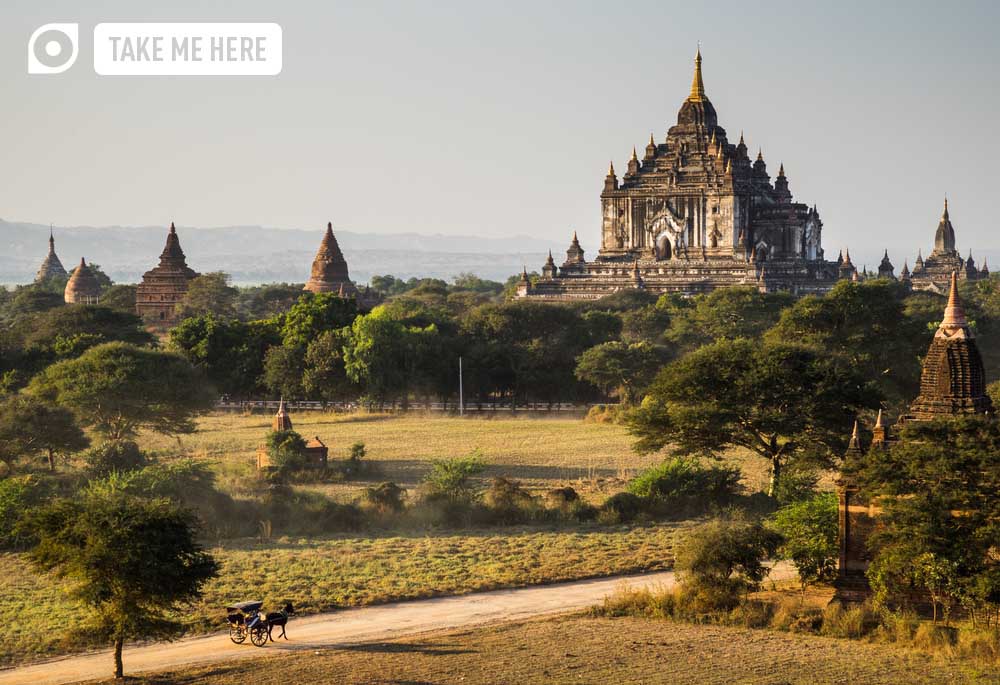 A horse-drawn cart at sunset in the plains of Bagan, Myanmar. Photo: Shutterstock

Continue from Bagan to Mandalay. To reach Mandalay, you can take a bus, a train or a domestic flight. For the more adventurous, you can take a boat trip down the Irrawaddy River. Mandalay was founded relatively recently, in 1857, by King Mindon, who was fulfilling an ancient Buddhist prophecy. It is said that Gautama Buddha once visited Mandalay Hill with his disciple Ananda. He proclaimed that on the 2,400th anniversary of his death, a metropolis of Buddhist teaching should be founded here. Today, Mandalay is home to Mahagandayon, a Buddhist monastery where over 1,000 monks live and study. A guided tour of the Mahagandayon is included on Insight Guides' Myanmar Highlights trip. The world's largest book also resides in Mandalay. It is comprised of the Theravada Buddhist canon in Pali, spread over 729 marble slabs. It is on display at the Kuthodaw Pagoda. Mandalay is also well known for its silk and cotton weaving, so be sure to visit a local workshop. Another of Myanmar's most iconic sites, the U Bein bridge, is located near Mandalay. The U Bein bridge, which was built in 1782, is constructed entirely of teakwood and spans more than 1,000 metres. It is believed to be the oldest bridge of its kind in the world.

The easiest way to get from Mandalay to Inle Lake is to fly to Heho. This will allow you to take a small but highly recommended detour to see the Pindaya Caves. Set in a system of dramatic limestone caves and caverns, the Pindaya Caves are home to thousands of statues of Lord Buddha. There are estimated to be some 8,000 makeshift shrines in the caves, left behind by pilgrims and dating back to the late 18th-century. Learn all about the history and legends of Pindaya Caves with a guided tour, as featured in Insight Guides' Mesmerising Myanmar trip.

There are a handful of towns to stay in around Inle Lake. Nyaungshwe is a good choice, and has a fine selection of accommodation and tour providers. From Nyaungshwe, it is a short distance to Inle Lake. We recommend spending two days exploring the lake by boat. A freshwater lake, Inle Lake is famous for its leg-rowing Intha fishermen. They can be seen balancing perilously on one leg, on the back of a small boat. Net in hand, they maintain this pose, using their spare leg to power an oar and glide around the lake, casting their nets as and when. Also on the lake are floating gardens and villages. Enjoy lunch at a floating restaurant on the Inle Lake as part of Insight Guides' Mesmerising Myanmar trip. The Hpaung Daw U pagoda sits on the shores of the lake in the weaving village of Inn Paw Khon, and is well worth a visit. All the buildings in the village are made from teak and stand on stilts. After you've explored Inle Lake, it's easiest to fly back from Heho to Yangon, to catch your departure flight.