Track the powerful Kalahari lion and see the stealthy cheetah in the Kgalagadi Transfrontier Park, one of the world’s largest national parks. Come across a huge rhino, a zebra quenching its thirst, or an elegant giraffe munching its lunch, at Mokala National Park and Tswalu Kalahari Reserve. See mighty birds of prey silhouetted against the sun and gaze at a star-filled sky come nightfall. The sparsely populated Northern Cape, with its vast expanses of sun-baked desert and solitude, is one of the best regions for a South Africa safari. 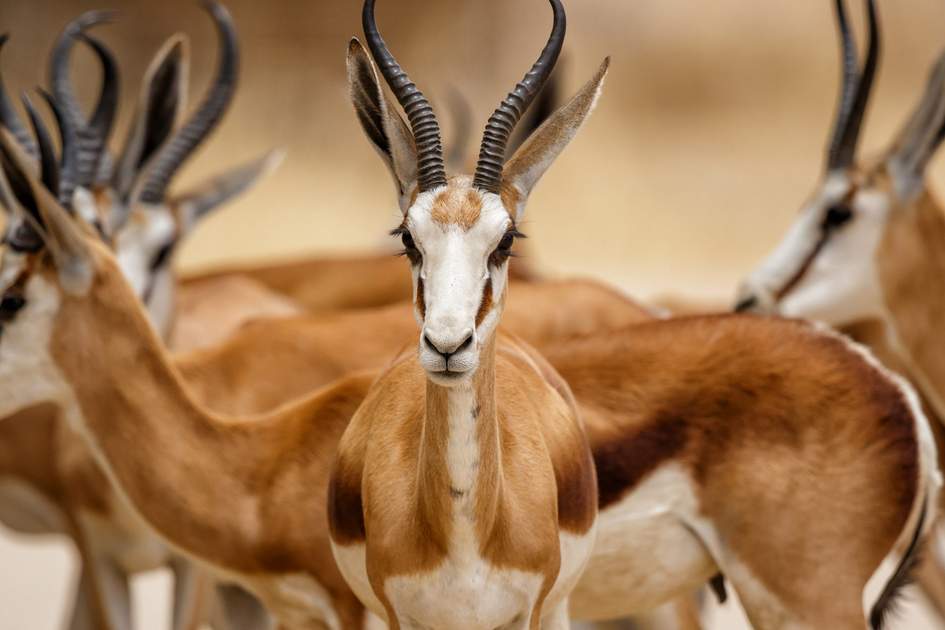 The park’s wildlife, coupled with the extraordinary landscape of vast open desert and endless skies, make this ideal safari territory. It’s particularly spellbinding at sunrise and sunset, when the orange glow of the low sun spreads across the sky and meets the undulating red dunes. As the sun goes down, the dense darkness reveals a spectacular sky studded with millions of stars. 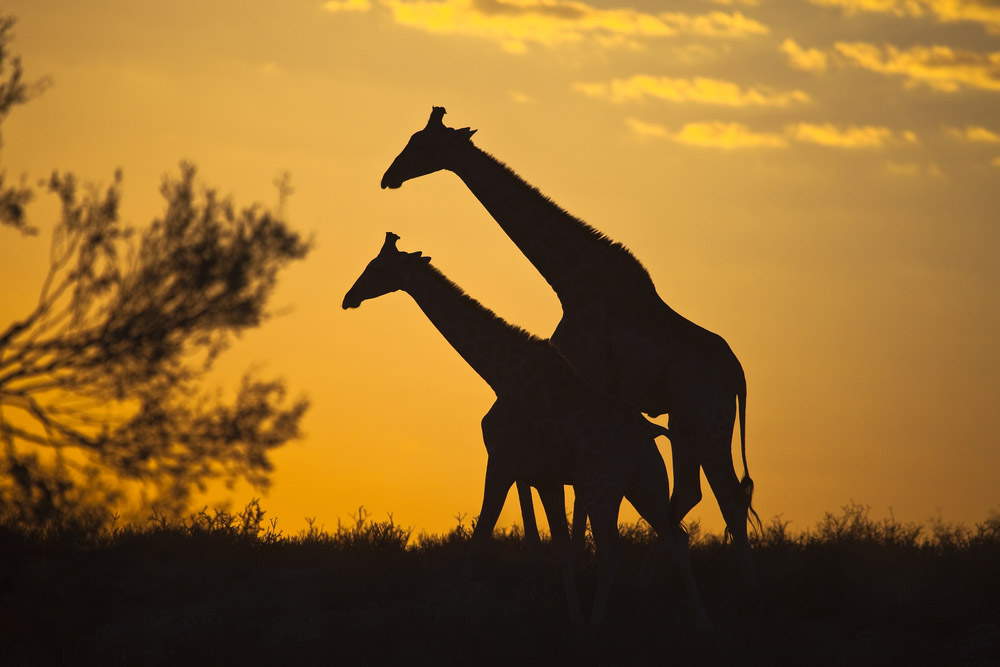 Talking of stars, the obvious ones are the predators, in particular the big cats, such as the lone leopard, the swift cheetah, the mighty black-maned Kalahari lion. But there are also giraffes, herds of blue wildebeest, springboks, ostriches, and graceful galloping gemsboks, as well as packs of roaming hyenas and groups of meerkats surveying the scene on their hind legs.

With around 280 species of birdlife in the park, either resident or migratory, it’s also superb territory for bird enthusiasts.  Tawny, and black-breasted snake eagles, bateleurs, vultures, goshawks, and pygmy falcons – the continent’s smallest, though no less fierce, bird of prey – are pretty common sightings. 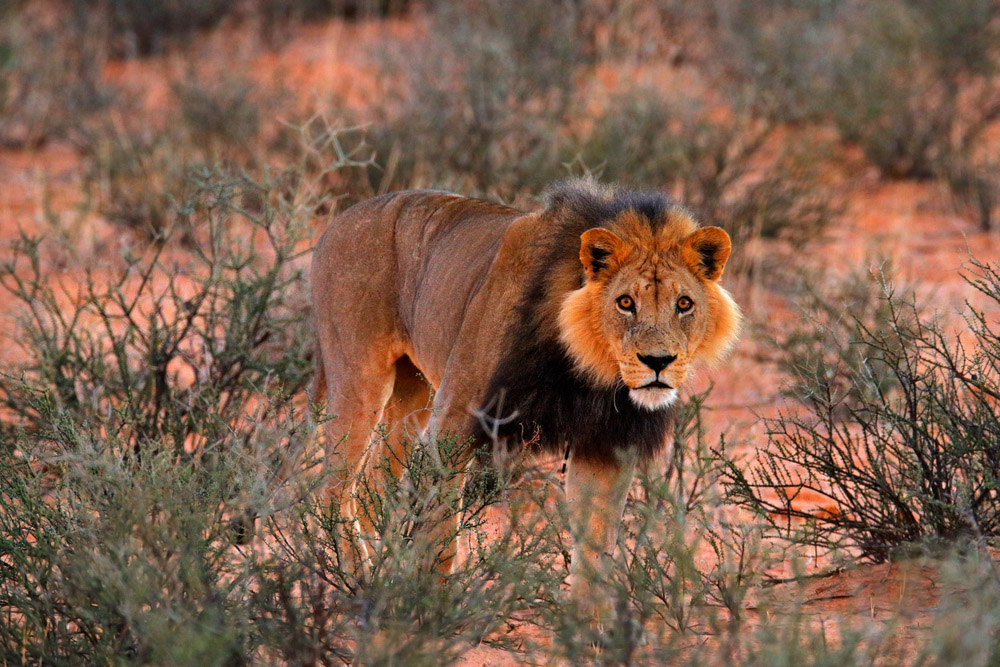 There’s a lot of ground to cover and doing a self-guided game drive at your own pace is a great way to explore the park. Or opt for a guided game drive – either in the day or at night. The Nossob 4x4 Eco Trail falls somewhere in between and offers great adventure and immersion in nature. While you drive, a guide escorts you in another vehicle. It’s a one-way, three-night and four-day, excursion across the dunes between Twee Rivieren and Nossob restcamps, stopping overnight at basic self-catering campsites.

You can book all guided drives, as well as day walks, at the park’s restcamps: Twee Rivieren, Mata-Mata and Nossob. There are various vehicle rental companies, including Desert 4x4 Rental and Kalahari 4x4 Hire, offering 4WDs. 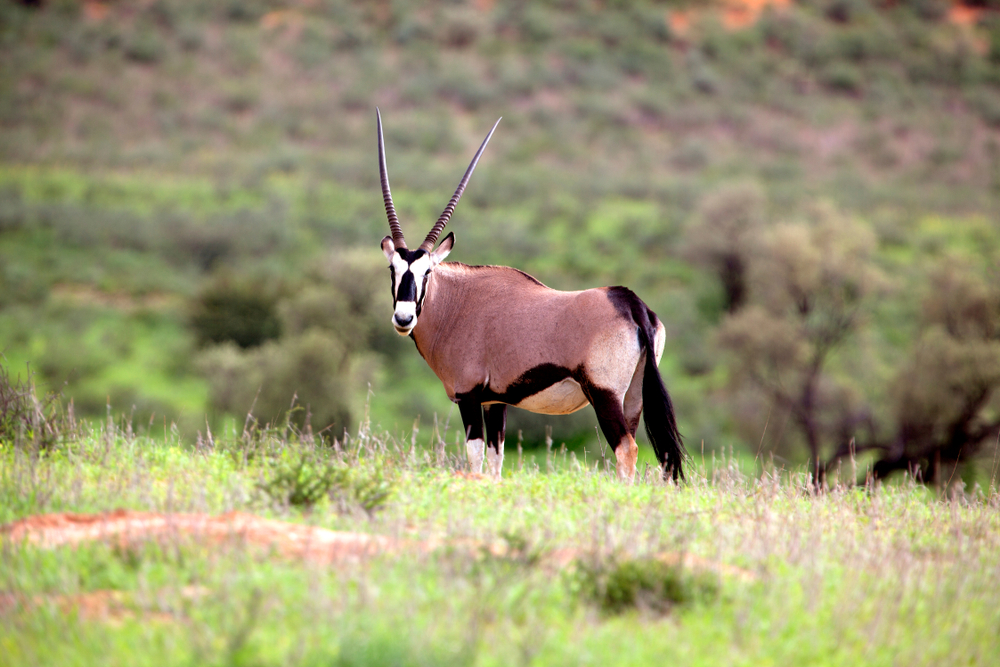 You’re not limited to exploring the South Africa section of the park. From Twee Rivieren you can drive into Botswana – and you can enter and leave the park in either territory.

Where to stay – Kgalagadi safari camps

To make the most of your time at Kgalagadi, you’re best off staying inside the park, so that any excursions can start almost from your front door. Whether you’re after a comfortable chalet, a simple log cabin, or fancy sleeping under canvas, Kgalagadi offers a range of accommodation options to suit you and your budget. Just make sure you book well before your holiday, as they fill up often a year in advance.

There are three fenced restcamps: Twee Rivieren, Mata-Mata and Nossob, each with chalets and camping areas, a shop, fuel facilities – and, most enticingly – a swimming pool. Twee Rivieren is the largest of the three, but it’s worth going the distance to stay at Nossob to really experience the essence of the desert. And, not only will you have a better chance of seeing Kalahari lions, you may even hear them roar at night.

Staying at one of the park’s six unfenced wilderness camps allows you to fully appreciate the surrounding stark desert wilderness. They offer a mix of cabins, chalets and tents, but are self-catering, so you need to be self-sufficient. Choose from Bitterpan, Gharragab, Grootkolk, Kieliekrankie, Urikaruus Wilderness camps, and the Kalahari Tented Camp. 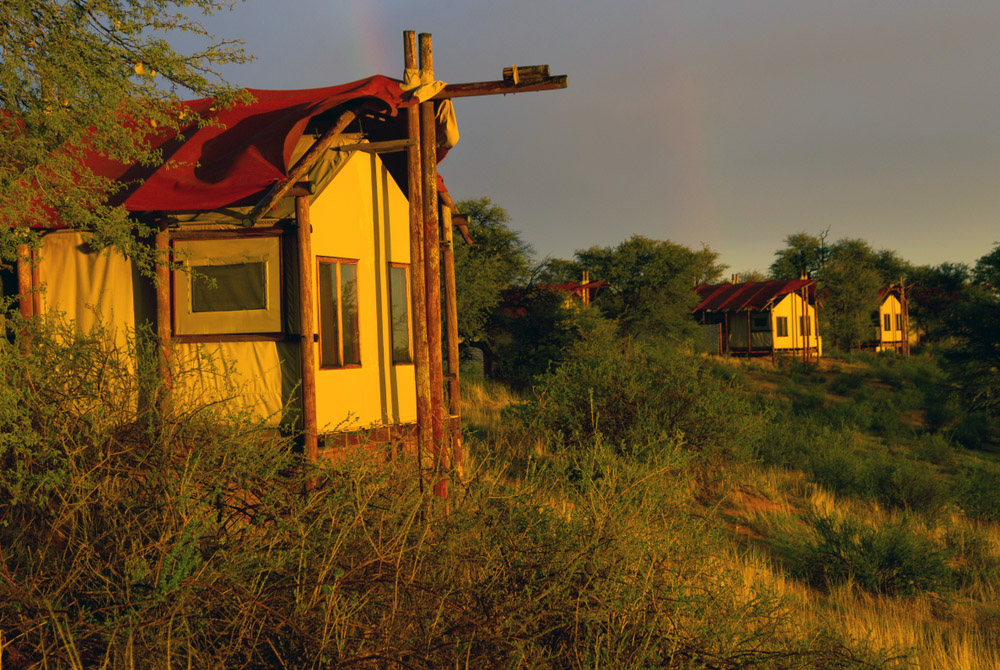 If you’re after a bit of catered luxury, !Xaus Lodge provides swishness with a focus on responsible tourism. Twelve sandy-coloured chalets offer panoramic views over the desert landscape and large salt pan. There’s a lodge with a cosy fire for those cold desert nights, while a swimming pool provides relief from the intense daytime heat. !Xaus is owned by the Khomani San and Mier communities, who offer bushwalks and wild game drives.

The big felines are the cats’ whiskers – so to speak – on most people’s safari checklist. However, there are so many  other mammals you should see.

Mokala National Park is 48,000 acres of sandy, hilly landscape, interspersed with camel thorn trees (Mokala is their Setswana name). It’s home to many endangered animals, relocated here after the closure of the Vaalbos National Park, such as the black rhino and the heftier white rhino, giraffe, zebras, black wildebeest, buffalo, tsessebe, roan and sable.

The rocky outcrops, which are a feature of the landscape, also attract many species of birds, including vultures, goshawks, various owls and soaring eagles, and at night you may hear the call of the freckled nightjar. 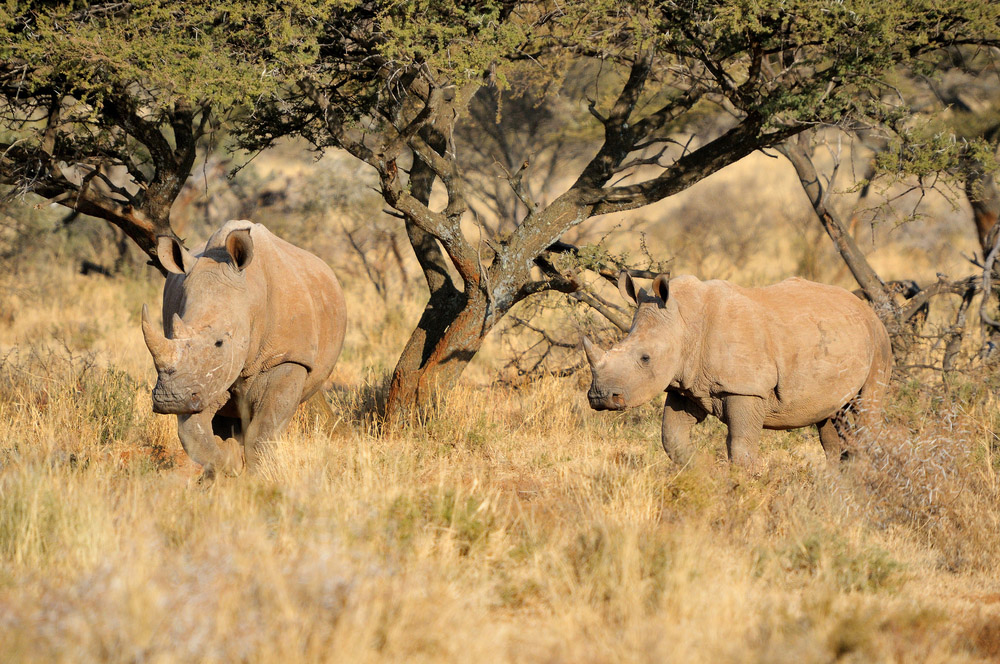 Take a morning, sunset, or nighttime guided tour, which you can book at Mosu Lodge or Lilydale restcamp. Or, drive yourself if you want to discover the park at your own pace. Unless there’s heavy rain, a normal car should be fine on the park’s roads.

Where to stay – Mokala safari camps

The park has various options, including cottages, camping, a bird hide and treehouse log cabins. Lilydale restcamp offers thatched cottages and – always a winner – a swimming pool. It’s spot by the Riet River also offers opportunities for great fly fishing for any keen anglers. Mosu Lodge is the main camp in Mokala park, with stone and thatched bungalows, a lounge with fireplace, and a pool – all making for a comfortable stay. 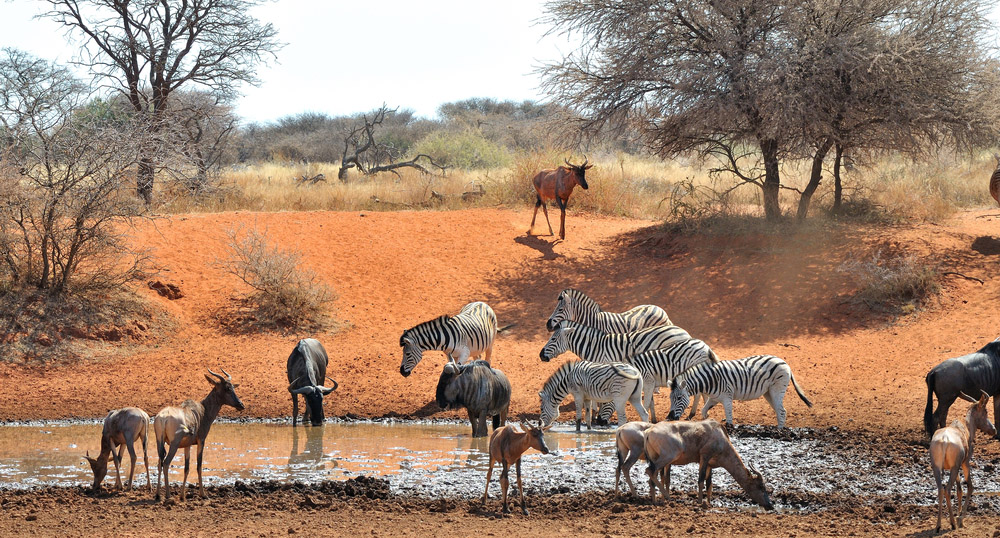 There’s also a four-person cottage at Haak en Steek Camp, or you can go rustic and camp nearby at the Motswedi Camp Site. The Stofdam Bird Hide is available for one-night stays, while close by is the lovely Dinokeng Tree House, a log cabin on stilts by a floodlit watering hole.

Stylish accommodation and meals – check. Spa treatments, pool, a gym, and a personal guide and tracker to accompany you on safari – check. For safari luxury (if your wallet allows), a stay at the Tswalu Kalahari Reserve ticks all the boxes.

This is the biggest private wildlife reserve in South Africa, which also happens to have commitment to conservation at its core. Over the past 20 years or so, the reserve has been expanded and the land rewilded, to provide sanctuary for many predators, including lions and cheetahs, while breeding programmes have ensured the survival of indigenous species, such as the sable and roan antelope.

There are also giraffes, zebras and – and those ridiculously cute meerkats, alongside less attention-grabbing pangolins and aardvarks, among others. As well as safari drives, there’s the opportunity for guided horse rides, nature walks – and a helicopter safari. As we said – luxury! 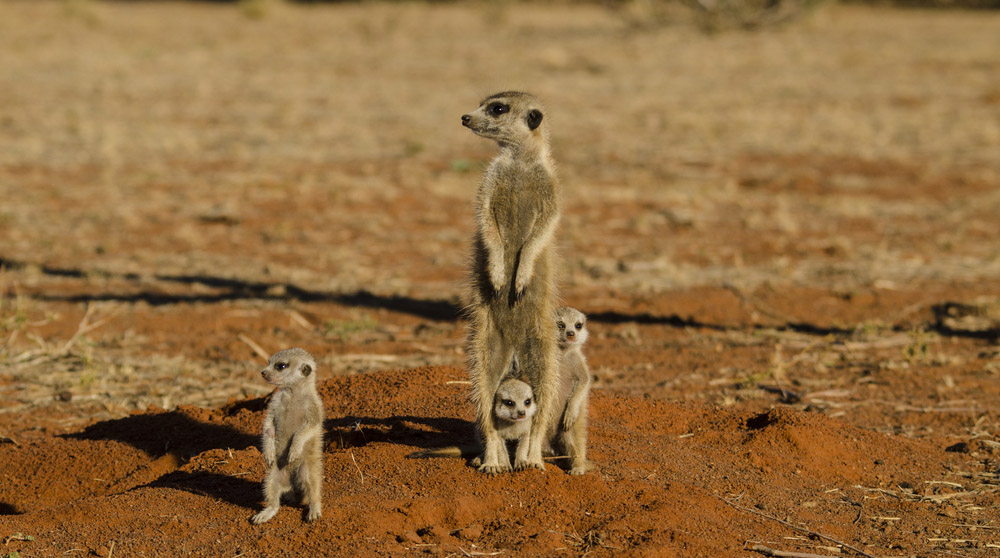 Other outdoor activities on your safari

Deafening waterfalls, stark desert landscapes, thrilling raft adventures, leisurely kayaking trips, spectacular plant life, hot springs and stargazing...the animals are only part of the picture. The incredible landscapes of the Northern Cape are worth exploring and integrating into your safari adventure.

The stark and rugged mountain desert of the Ai-Ais Richtersveld Transfrontier Park doesn’t have much in the way of animal life. But its austere beauty is arresting. It also provides outdoor adventure, with rafting and kayaking opportunities on the Orange River, as well as walking trails for experienced hikers.

Visit in August and September during flower season and you’ll see the park’s succulents bursting into bloom. And for even more dazzling displays of floral colour, add Namaqualand into your itinerary, particularly Namaqualand National Park.

A visit to Augrabies Falls on the Orange River must feature in your holiday plans. The sight – and sound – of the colossal amounts of water, hurtling 56m below, is breathtaking (and deafening). There are also hiking trails and opportunities to get afloat on rafts or kayaks with Kalahari Outventures. 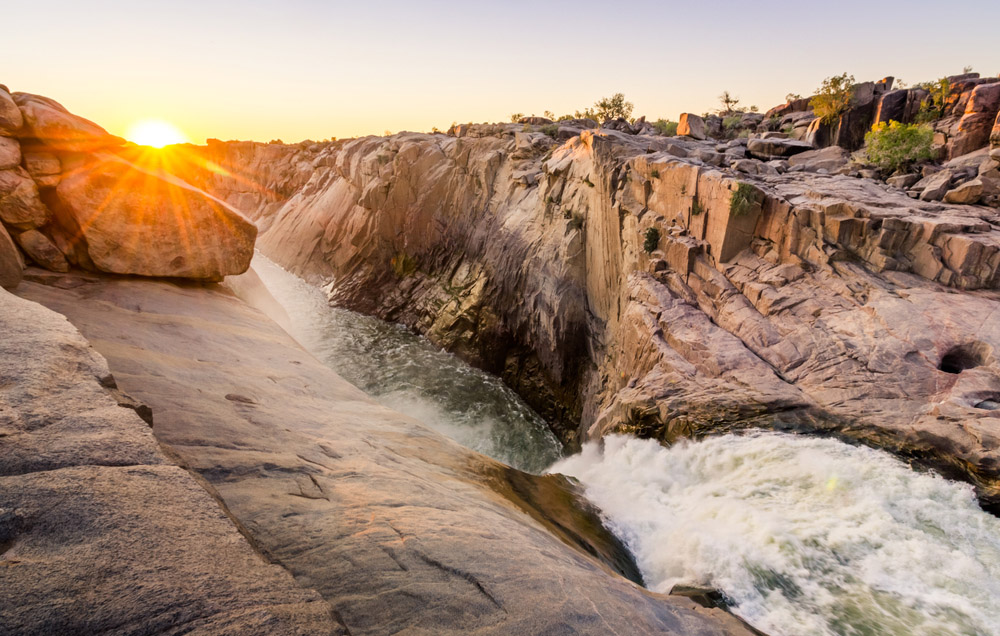 Booking a safari with a tour operator

You could spend a considerable amount of time organising your safari holiday – the research, the planning and booking, trying to figure out where exactly you are on a map that seems to be mainly desert. So you might want to pass on the task to those with local knowledge and expertise in the field. There are several safari and outdoors adventure operators in the region who offer Kalahari safaris, and tours can include so much more than just safari game drives.

There are multi-day trips that take in some of the amazing landscapes of the Northern Cape. These include adventure on the Orange River in the Ai-Ais Richtersveld Transfrontier Park, such as rafting, canoeing, and – somewhat less adrenaline-inducing – fishing, as well as expeditions to see the mighty waterfalls in Augrabies Falls National Park, and excursions to the Riemvasmaak hot springs. 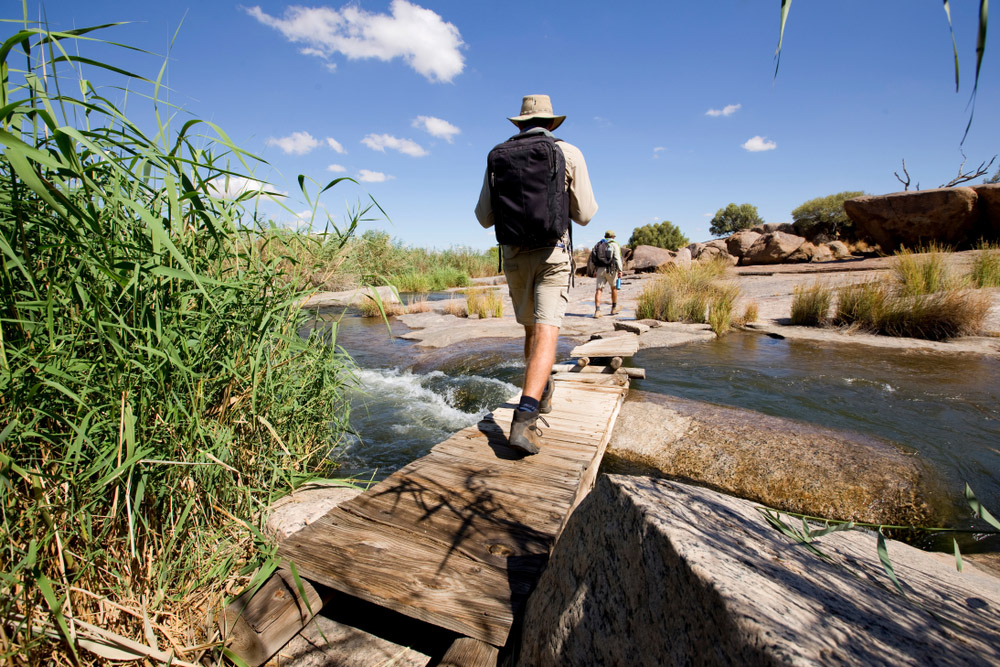 Find out more about safaris in South Africa and discover more about the Northern Cape – so that you can start planning your trip.