Our guide to Notting Hill Carnival 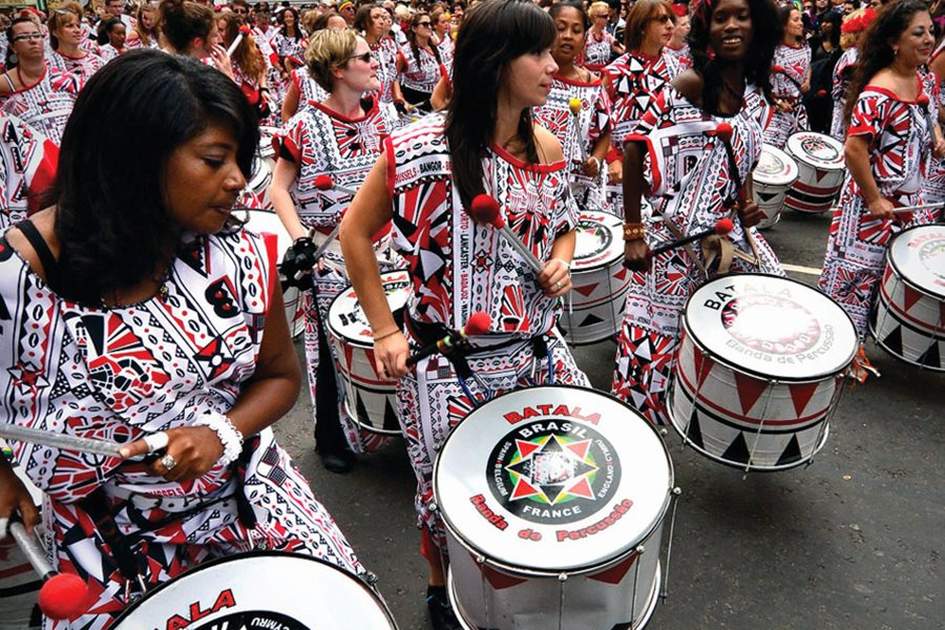 If you’re at a loose end in London this bank holiday weekend, then head down to Notting Hill to soak up the atmosphere of the world’s second largest Carnival.

This weekend the streets of Notting Hill will be packed with around a million people celebrating Carnival, the massive three-day Caribbean festival. Read on for our guide to the area’s history, and our top tips for a fun-packed Carnival.

Go back in time, and Notting Hill was not the fashionable neighbourhood it is today. In the 1800s, when the area’s grand crescents sat next to noxious slums, it was, according to Dickens, ‘a plague spot scarcely equalled for its insalubrity by any other in London’. Even as recently as the 1950s, the district was very poor. Large numbers of Afro-Caribbean immigrants settled in overcrowded lodging houses, and the area saw race riots in 1958. The first carnival was a small affair, held in St Pancras Town Hall in 1959 to unite communities after the riots. It moved to Notting Hill in 1965.

Now different cultures rub along more happily, though the local population became largely white middle class in the 1990s, when monied people from the worlds of fashion and media moved in, attracted by the lingering street cred of the mix of ethnic cultures and shabby chic look. The neighbourhood is now extremely expensive and largely the province of investment bankers. The famous Notting Hill Carnival lives on, however; it has grown from modest beginnings to become the world’s second largest, after the one in Rio.

Which day to go depends on what you’re after. Monday is generally thought to be the livelier day, and hosts the main event, the Bank Holiday Monday parade (10am till around 6.30pm). Sunday is Children’s Day and is generally lower-key, but can be even more fun – and you certainly don’t need to have a kid in tow to enjoy it. If you can’t make either day, then visit on Saturday night when you can hear the steel band competition at Emslie Horniman Pleasance park (near Westbourne Park tube station) from 7pm.

The steel bands kick off at about 9am on both days and will wind down around 6.30pm – the end of the day can be a great time to pick up a delicious food bargain or two. The party continues well into the evening.

Don’t even think about driving to Carnival. If you cycle, then leave your bike well away from the action. Check out the Carnival website for the latest public transport info, as Ladbroke Grove station is shut during Carnival and most of the surrounding tube stations are exit-only. Bear in mind that approaching from the north is generally the busiest route, so consider instead arriving from the south or west.

The parade route takes in Ladbroke Grove, Westbourne Grove, Chepstow Road and Great Western Road. Along the way, and on the roads leading off, you’ll get to sample all kinds of Caribbean rhythms, from traditional steel bands, calypso and soca to static sound systems blaring out R&B, reggae, garage, hip-hop and more.

The food is one of the highlights of Carnival. There are no end of stalls where you can try jerk chicken, rice and peas, curried goat and more. If you want alcohol then consider bringing it from elsewhere, as there can be a massive mark-up in local stores. The toilet situation isn’t great, so avoid the pints. Some entrepreneurial locals let you use their loo for a fee.

Generally there is an amazing, trouble-free atmosphere at Carnival, but as at all big events, crime does happen. Keep your wits about you, take all the usual precautions and you'll be fine. Consider leaving your phone at home, as you won’t get any signal for most of the day anyway.

For more on Notting Hill and more, check out our fantastic range of London travel guides.