How to explore Bangkok's Old City

Looking for places to explore in Bangkok? Soak up the atmosphere of the Old City in myriad picturesque lanes containing some of the capital’s most important temples as well as a riverfront flower market 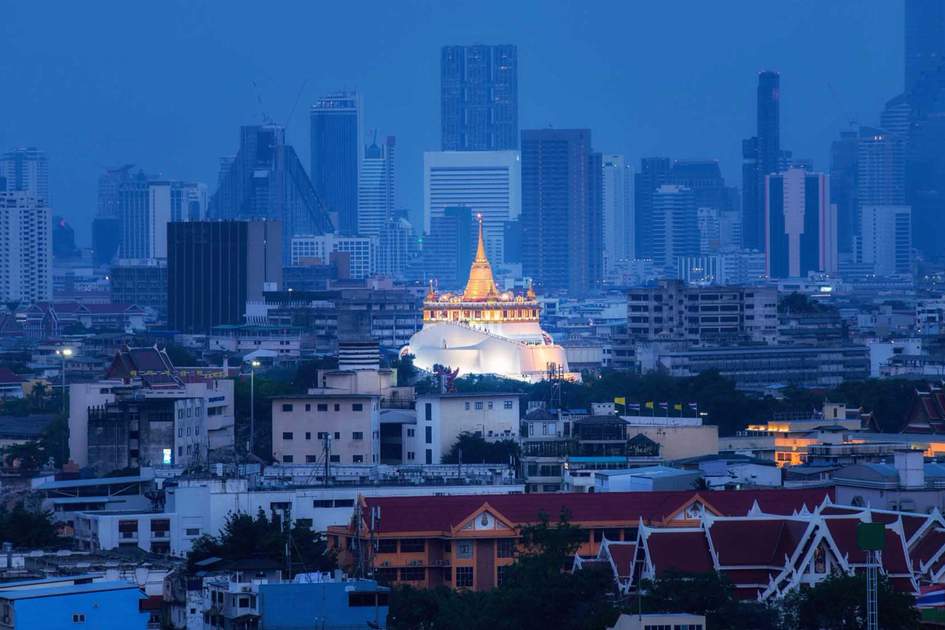 Distance: 4km (2.5 miles)
Time: 5 hours
Start: Loha Prasat, Wat Ratchanatda
End: Phra Buddha Yodfa Monument
Points to note: To get to Bangkok's Old City and our starting point of Wat Ratchanatda from downtown, take either a taxi or a river taxi along Klong Saen Saeb from Pratunam Pier. Tell the conductor you are going to Tha Saphan Pan Fah. Better still, book Insight Guides' Best Of Thailand trip and we'll take you around ourselves, stopping at arts and crafts shop along the way to soak up the local culture. For something different, explore this area at night on Insight Guides' Bangkok Culture trip.

Begin the tour at the Loha Prasat (Metal Palace; 2 Thanon Maha Chai; daily 9am–5pm), which is the most striking element of the Wat Ratchanatda temple complex. Rama III (1824–51) ordered the step pyramid-style construction in 1846, to be modelled on a Sri Lankan temple from the 3rd century BC. Its 37 black metal spires, each topped with an umbrella-like embellishment called a hti, represent the virtues needed to attain Buddhist enlightenment. You can climb a spiral staircase past corridors of meditation cells onto the roof, from where there are dizzying views.

In the wat forecourt, to the left as you enter from Thanon Maha Chai, monks wander around the Wat Ratchanatda Buddha Centre, a small market that specialises in prayer beads, Buddha images, amulets and pennants bearing the faces of revered monks.

Come out of the wat onto Thanon Maha Chai and turn left. At the traffic lights turn right, go past the remaining walls of Mahakan Fort, part of the original city ramparts, and across the bridge. Turn right and cross the next bridge. A short way along on the left is Wat Saket (344 Thanon Chakkaphatdi Phong; daily 8am–5pm) and the Golden Mount (daily 7.30am–5.30pm).

This is the site of the former Wat Sakae, where King Rama I stayed and was blessed on his way to Thonburi to assume the throne in 1782. He later restored the temple and renamed it Wat Saket. Low-lying Bangkok got its then highest vantage point in 1865, when Rama IV completed the 78m (256ft) -high Golden Mount, so called because it is topped with a golden chedi.

Take the gentle climb past rock gardens with ringing temple bells and a 360-degree view of the city as the path spirals upwards. There’s a refreshment stop halfway. The main temple complex of Wat Saket spreads out at the foot of the mount. The buildings include a seated Buddha and murals in the Phra Ubosoth (ordination hall), and a lovely wooden scripture library that dates to the time of Rama I.

Leaving the temple from the library turn right and walk 150m/yds to Thanon Chakkaphatdi Phong. Turn right, then right again at the traffic lights into Thanon Bamrung Muang. After 200m/yds go left into Soi Ban Baat, where the Monk’s Bowl Village (daily 8am–6pm) is located, 50m/yds on the right.

Although you still see monks carrying metal alms bowls (baat), the bowls are now mainly machine-made, and there are just five families remaining of the original community that moved here from Ayutthaya in the 18th century to make hand-beaten bowls in the new capital. You can hear the alley before you see it – the noise of hammers clack-clacking on metal as the craftsmen combine each bowl’s eight metal pieces, which represent the eight spokes of the Buddhist Dharma Wheel, in turn signifying the Eightfold Path to the end of suffering. The bowls are finished with black lacquer and coloured inscriptions. It takes up to three days to make each one. You can buy them for between B500 and B1,000.

Leaving the village, go back to Thanon Bamrung Muang and turn left. Cross both the small bridge and the main road (Thanon Maha Chai) and carry on straight ahead. The Old City is full of temples, and this street has typical shops selling accoutrements for Buddhist worship and funeral rites. It is not unusual to see pick-up trucks driving around with 4m (12ft) golden Buddha statues strapped to the back.

The square at the end of the road is dominated by the huge teak posts of the Giant Swing 4 (Sao Ching Cha). Bangkok’s original Giant Swing, erected by King Rama I in 1784, was based on one in Ayutthaya that had been brought to Thailand by Brahman priests in the 16th century. It was used to observe Triyampawai, the Brahmin New Year Ceremony, during which four young men in a gondola would swing ever higher, trying to catch purses of gold hanging from poles. The ceremony – a manifestation of a fable in which a serpent swinging between jujube trees tried to topple Shiva and cause the end of the world – was banned in 1931 after several accidents.

If you turn right at the square, on the next corner you will find Go Pe Shop, see below. 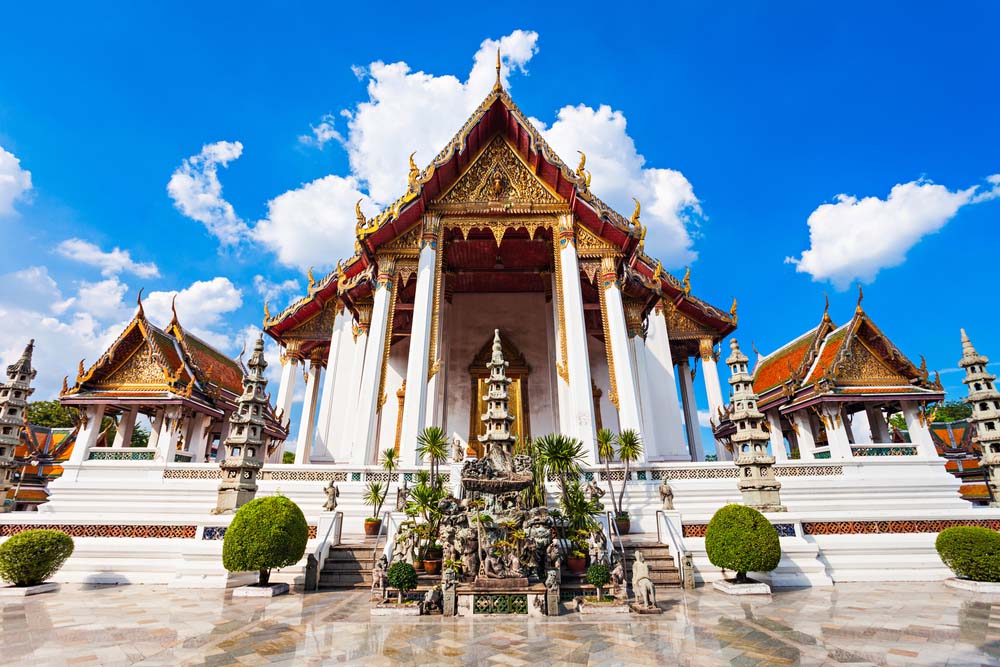 To the left of the Giant Swing is Wat Suthat (146 Thanon Bamrung Muang; daily 8.30am–9pm; charge), said to have the city’s tallest bot and also famous for its 8m (26ft) Phra Sri Sakyamuni Buddha, the city’s largest and oldest cast-bronze Buddha. Its base contains the ashes of King Rama VIII. King Rama II is said to have helped carve the beautiful doors of the wat, which was begun in 1807, but only completed during the reign of King Rama III (1824–51).

Come out of Wat Suthat, turn left and go straight across the junction into the lane ahead. For a meal break, turn right then first left at the crossroads by the Siam Commercial Bank, and you will come to Chote Chitr, 20m/yds on your left, see below.

Head south where Thanon Kanlaya Namit intersects with Thanon Fuang Nakhon. You will soon come to Wat Ratchabophit 6 (daily 8am–8pm), built in 1870 by Rama V. The chedi doors have inlaid mother-of-pearl insignia of the five royal ranks, and the architecture has both Thai and French influences, with outside decoration of benjarong (five-coloured ceramic) tiles and an interior that is akin to a miniature Gothic cathedral. This is typical of its period, which saw many official buildings mix Eastern and European styles. This square of buildings also houses a school and a cemetery for King Rama V’s family.

Turn right from the wat and cross over the next junction to where the road becomes Thanon Ban Mo, with its bustle of hi-fi market vendors selling everything from mini DVD players to huge PA stacks.

Further along on the right is the beginning of the Flower Market (Pak Khlong Talad), which continues into the covered area on the other side of Thanon Chakkaphet, spilling onto streets lined with displays of roses, carnations, sunflowers and myriad orchids. The market occupies a river location to receive flowers from Bangkok’s outlying nurseries.

Turn left into Thanon Chakkaphet and after 100m/yds you come to Thanon Tri Phet. On the right, in a garden square, is the Phra Buddha Yodfa Monument, a seated statue of King Rama I erected in 1932 to honour Bangkok’s 150th anniversary. From 7pm to 2am each night, the pavements around the monument come alive with Saphan Phut Market, operating from covered stalls and blankets on the ground. Among a wide selection of goods, the market is noted for clothing and accessories. Either take a taxi from here back to your hotel or walk south past the monument to the Memorial Bridge express boat stop.

This is a sweet Chinese corner shop in Bangkok's Old City with round marble tables and tasty noodle and rice dishes. Breakfast Set 1 (fried eggs with ground pork) is a favourite, along with fresh Thai coffee from the Chiang Mai hills.

A five-table shophouse opened some 90 years ago by a doctor of traditional medicine. They have served excellent food (and medicines) ever since. Famed for wing-bean salad, mee krob and wonderful ‘old-fashioned soup’.

Ready to take your trip to Bangkok's Old City with Insight Guides?

Browse our range of suggested itineraries, or submit a trip request today; remember the route outlined above can be added to any trip.