A perfect day in Florence

Historical palaces, great churches, exquisite sculptures and countless masterpieces – Florence is packed with wonderful things to see and do. Here’s the perfect way to spend 24 hours in one of Italy’s most beautiful cities 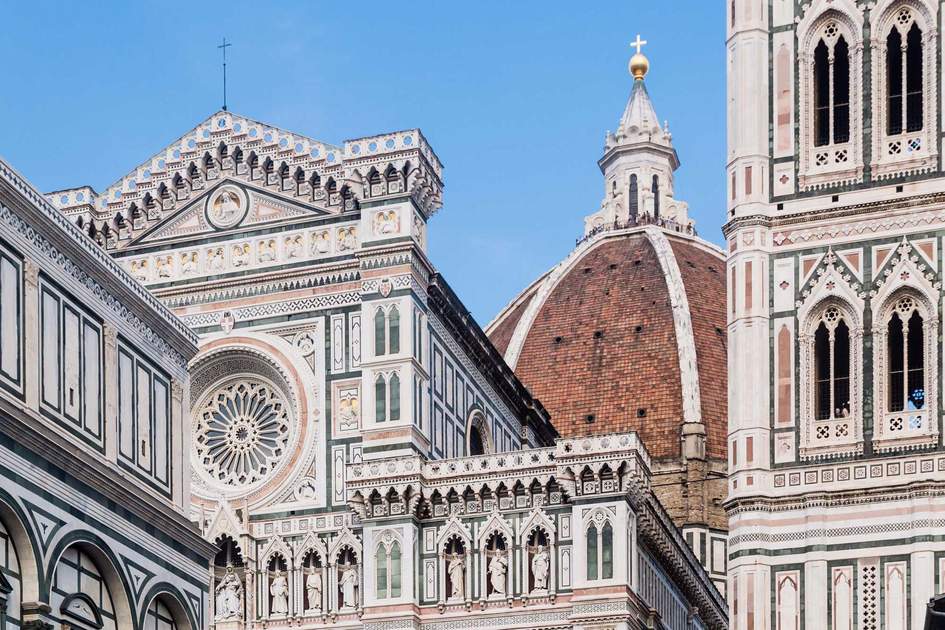 09.00am: Start your day with an indulgent breakfast

There’s nothing like a languid breakfast in the sunshine when you’re on holiday. Start your day with a cappuccino and cornetto at Caffè Scudieri on the Piazza di San Giovanni (19r). This smart, long-established café/pasticceria – opened in 1939 – is right in the heart of Florence, in the newly pedestrianized Piazza. Make sure you take your cappuccino early in Florence as ordering one after 11am marks you as a tourist, although waiters are becoming accustomed even to the request of after-dinner cappuccinos by now (ordering coffee together with your dinner remains taboo – don't do it)!

10.00am: Explore the magnificent Duomo

Amble around the Piazza, admiring the Baptistery, Campanile (bell tower) and the iconic Duomo (cathedral). The Baptistery is Florence’s oldest building, a precious gem of octagonal Romanesque architecture which once served as the city’s cathedral. The Campanile is one of Florence’s most graceful landmarks, faced in green, white and pink marble to match the Duomo. The Duomo itself, designed by the great architect Arnolfo di Cambio, is the symbolic heart of the city and remains its tallest building. Those with stamina can tackle the 463 stairs spiralling to the top of the cathedral’s dome to admire Brunelleschi’s engineering genius and the fabulous views. Entry to the steps is via the Porta della Mandoria on the northern side of the Duomo.

11.30am: Window shop along Via de’ Tornabuoni

Take the Via Roma south of the Baptistery for Piazza della Repubblica, home to some of the city’s most elegant cafés. Stop here for a drink if you need a break. Otherwise, cross the square for Via Strozzi and at the end turn left into Via de’ Tornabuoni for the lavish flagship stores of Gucci, Prada, Pucci and Cartier to name just a few. The area has long been a haunt of the wealthy, who have lived here since the 14th century, building impressive palazzos and sponsoring richly-frescoed chapels. If you don’t want to risk bankruptcy with a purchase, window-shopping can be just as fun. 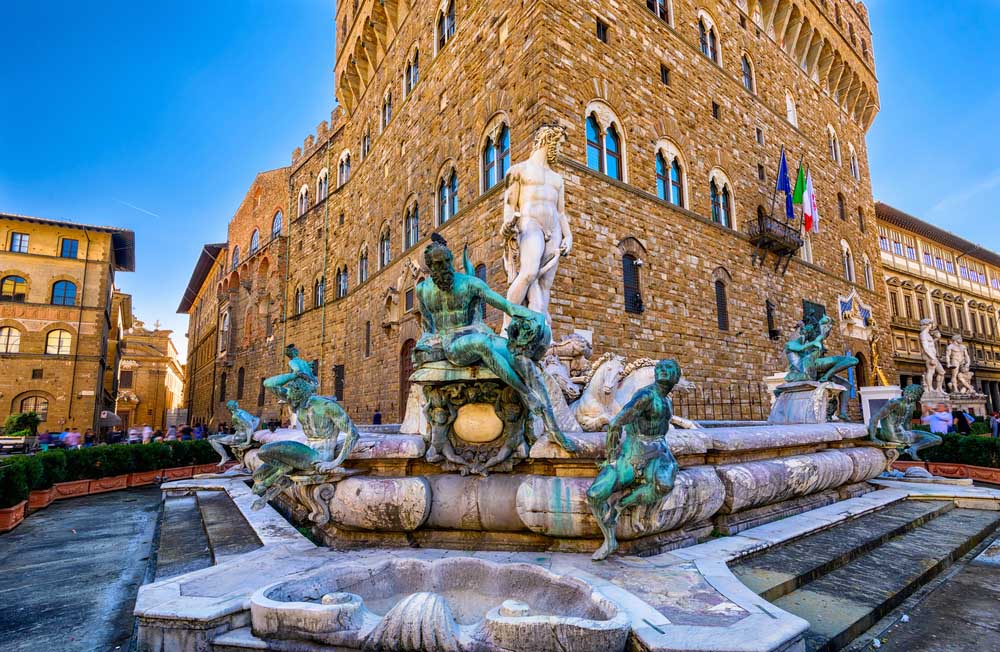 At Piazza Santa Trinità, turn left into Via Porta, passing halfway along the Palazzo Davanzati. At the end on the right is the Mercato Nuovo. A market has existed here since the 11th century; the main attraction today is the profusion of stalls selling bags, belts, small leather goods and assorted souvenirs. The current arcade was built in 1547–51 for the sale of silk and gold. Rub the snout of the 17th-century bronze boar to guarantee your return to Florence and maybe brave a tripe sandwich from the popular stand at the market’s southwest corner.

Since medieval times, Piazza dell Signoria has been a hub of city life. The city rulers have gathered here since the 13th century. Overlooking the piazza is the imposing Palazzo Vecchio, former ancestral home of the Medici. The palazzo’s off-centre 94 metre (308ft) tower, added in 1310, helps to soften the building’s squareness and complements its off-centre position on the piazza. Admire the array of open-air sculptures, check out the Gucci Museum (opened in 2011), or sit at one of the people-watching cafés. For a juicy bistecca a la fiorentina and a glass of Chianti, head for nearby Frescobaldi (Via dei Magazzini).

Head south for the river, passing the famous Uffizi Gallery, repository of the world’s finest collection of Renaissance art. At the River Arno turn right for Ponte Vecchio, symbol of Florence and its oldest bridge. Goldsmiths and jewellers have been selling their wares here since 1593. This was the only bridge to be spared destruction in World War II. Its banks were bombed, as evidenced by the 1950s buildings at either end, but the bridge remained intact. 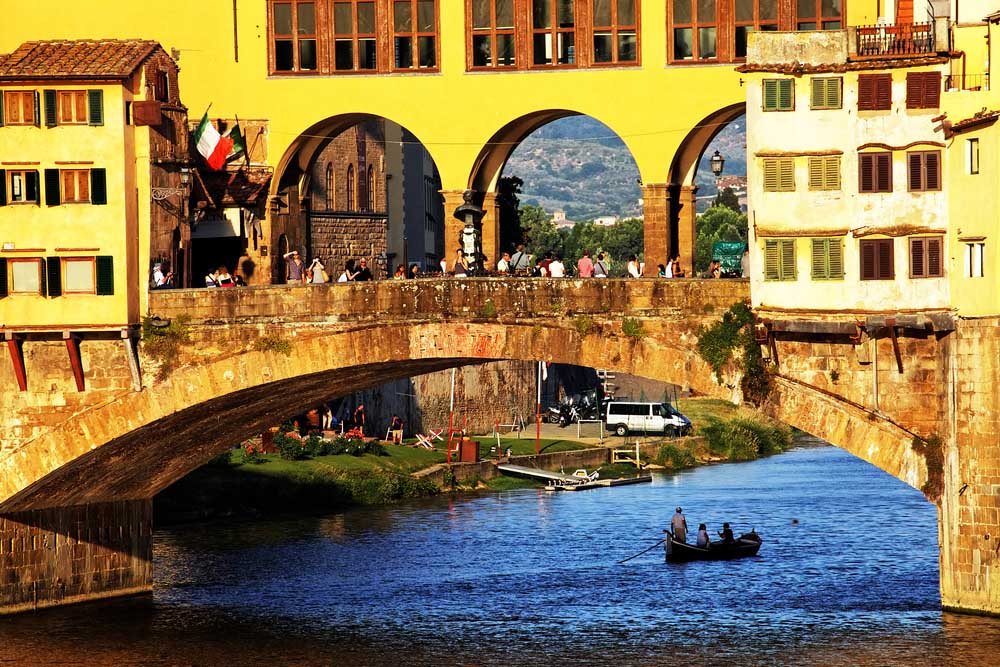 3.30pm: Escape to peace and quiet in Giardino di Boboli

From the bridge follow the flow to the Palazzo Pitti. The Florentine merchant Luca Pitti, who wanted to impress his rivals, the Medici, built this palace as a symbol of his wealth and power. Begun in 1457, it was continuously enlarged until the 19th century. The vast palace is now home to five museums and could occupy a whole day or more. Go inside if you want, or just explore the lovely Giardino di Boboli, the formal gardens dotted with loggias, cool fountains, grottos and myriad statues. The entrance to the gardens, at the back of the palace courtyard, leads to the amphitheatre, which has a fine view of the palace and the city beyond. In 2013, the garden was declared a Unesco World Heritage Site.

Make for Piazza Santo Spirito, an attractive tree-lined square just northwest of Palazzo Pitti. Relax with an aperitivo on the piazza and then choose a spot for dinner. The piazza buzzes with cafés, restaurants and wine bars. If you can get a table, try Borgo Antico, a jam-packed trattoria known for great thin-crusted pizzas in a lively atmosphere.

On summer evenings sit outside and admire the floodlit facade of the Church of Santo Spirito, or join the young Florentines in the lively haunts around the piazza. Florence is not renowned for nightclubs, but it does have plenty of bares, often with live music and/or an evening buffet for the price of an aperitivo. If you want to sample one of the current fashionable and more attractive bars in the centre, try the arty bar-club Dolce Vita (Piazza del Carmine), Santa Croce’s swank cocktail bar Moyo (Via dei Benci 23r), or the stylish Zoe (Via de Renai 13r).

Ready to take a trip to experience the best of Florence?

Book onto Insight Guides' Florence: A Trip Back in Time today or talk to a local expert to plan your holiday from scratch