Things to do in Mallorca

From its cosmopolitan capital city, Palma, to its stunning interior and craggy coastline, the Spanish island of Mallorca is known for wonderful places to eat and drink, magnificent mountains, Moorish remains, secluded coves and gorgeous beaches. Here is our pick of things to do in Mallorca.

Countless visitors are drawn to Mallorca each year to enjoy its sun, sea and sands, but the largest of the Balearic Islands has plenty of other attractions to recommend it. Whether you want to climb rugged mountains, visit remote villages or explore medieval monasteries, the island truly has something to suit everyone.

Backed by the narrow lanes and ageing properties of the island capital’s Old Town, the monumental Palma Cathedral overlooks the city’s waterfront from the crest of a hill. Dating from the 13th century, this elaborate, golden sandstone church actually took 500 years to complete and so features a variety of architectural styles, but it remains essentially Gothic. Huge exterior buttresses take the weight off its interior pillars and add to the sheer scale of the building, which is impressive from any angle, but is simply breathtaking when viewed from the esplanade running alongside the bay.

The cathedral's interior is as majestic as it is cavernous, rising 44 metres up towards the vaulted roof supported by slender columns, with the entire space illuminated by kaleidoscopic light flooding through tall stained-glass windows. Antoni Gaudi worked on an early 20th-century restoration resulting in distinctive interior features including iron railings twisted into unusual shapes in front of the high altar and an extravagant canopy suspended above it.

Palma’s café and restaurant scene is the most vibrant and varied in the Balearics, with a host of first-rate dining spots to be found in the Old Town and rejuvenated Sa Gerreria district – from buzzing tapas bars to world-class establishments serving exquisite cuisine. Bag a terrace table at bustling Bar Bosch on Placa Rei Joan Carles I to enjoy tucking into langosta bread rolls and tasty tapas dishes as you watch people passing by in the plaza. Nearby, Ombu offers creative small plates complemented by an excellent cocktail menu, while Forn de Sant Joan serves contemporary Mediterranean dishes on white tablecloths, across the four floors of a 19th-century former bakery. For a truly memorable culinary experience, reserve a table in Marc Fosh, where in the chic surroundings of Hotel Convent de la Missió, you can savour well balanced and finely flavoured cuisine prepared from locally sourced produce, by the eponymous Michelin-starred British chef. 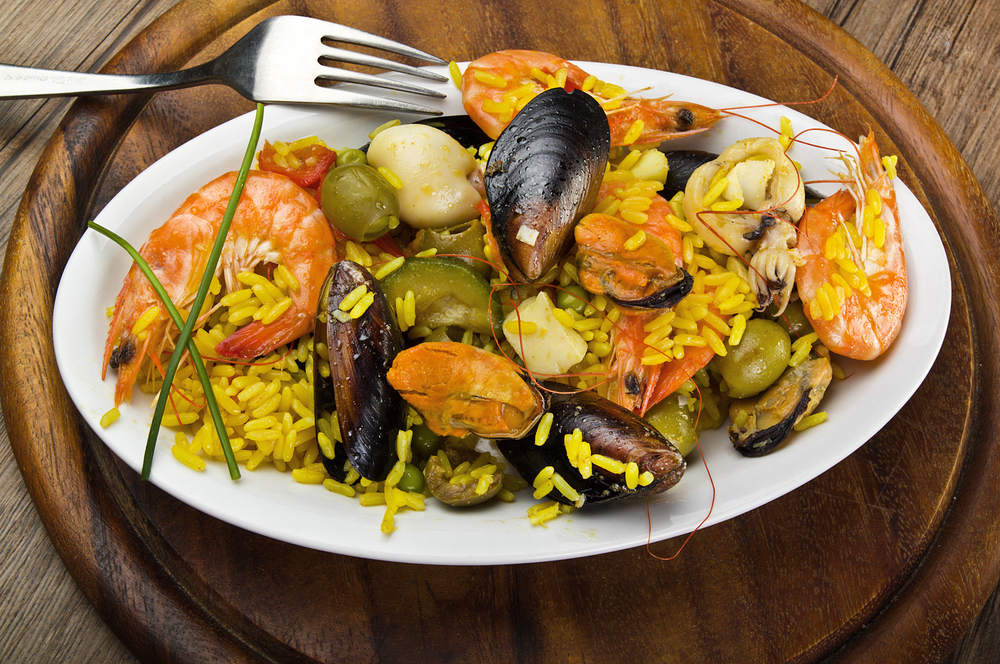 Mallorca is famous for its beaches and one of the best is the extensive stretch of powdery sands at Es Trenc. A few kilometres northwest of the town of Colònia de Sant Jordi on the south coast of the island, Es Trenc is a 3km-long strip of sandy beach that feels a world away from the resorts on Mallorca’s east coast. With fine white sands and turquoise to deep blue waters that are ideal for swimming, it’s neither unknown nor totally unspoilt, but crowds are easily absorbed except at the height of summer, and development is almost non-existent. There are small bars, restaurants and stalls renting parasols and loungers at the east end of the beach, near the beach car park not far from Colonia de Sant Jordi. A section to the west of Ses Covetes is designated as a nudist beach.

As a result of the porous limestone prevalent in Mallorca, the island’s landscape is peppered with caves and grottoes. One of a succession along the eastern coast, the Cuevas de Artà are some of the most spectacular that are open to visitors. A wide stairway leads up to a gaping hole in the cliffs high above the bay. Inside, guided tours in a variety of languages including English, offer full geological descriptions of the cavernous chambers extending 450 metres into the rock face, that are embellished with stalactites and stalagmites. Artificial lighting exaggerates the unusual natural forms in the caverns, including clusters of stalactites up to 50 metres long that hang down in shape of partly unfurled flags. 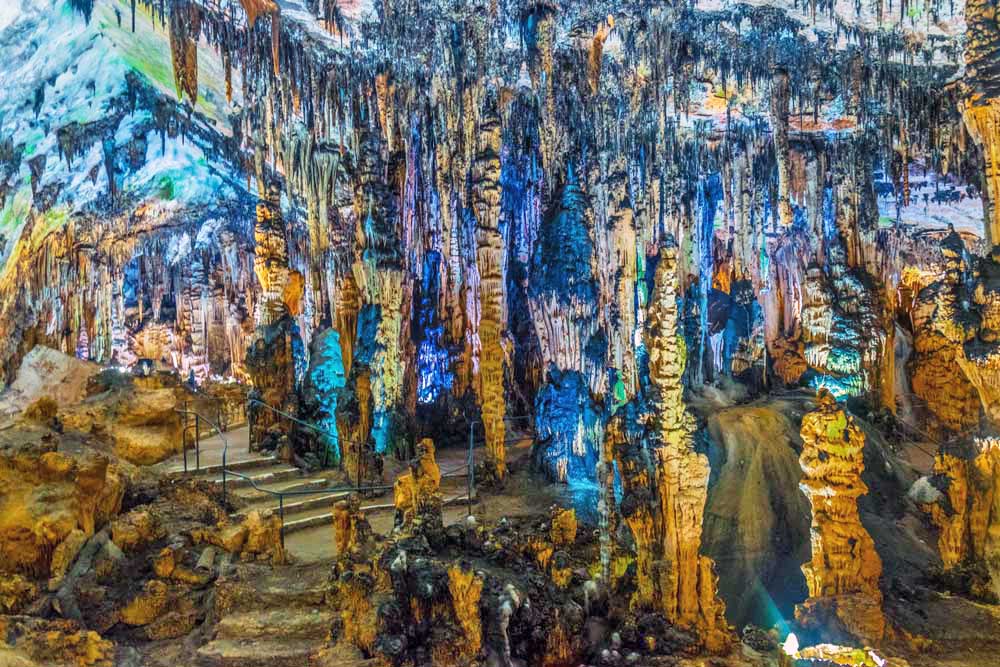 Hiking in the Serra de Tramuntana

Hiking is a major activity in Mallorca. Hundreds of hikers arrive each year, especially from March to May and from late September to mid-November to avoid the heat of high summer. Many walkers head to the magnificent Serra de Tramuntana mountain range that stretches along the island’s northern coast. The mountains have a network of reasonably well signposted hiking trails and there are several strategically placed hikers’ hostels along the most popular routes. The long-distance trail that attracts the most walkers is the GR221 Ruta de Pedra en Sec (Dry-stone Route), which runs right across the mountains from Sant Elm to Pollença, around 90km in total. A number of day-long hikes are also possible on Mallorca with local companies including Mallorcan Walking Tours and Tramuntana Tours offering guided hikes.

The tiny, old stone town of Valldemossa is known for its splendid medieval monastery, which has made it one Mallorca’s most visited destinations. Originally built as a royal palace, in 1399, the complex was gifted to Carthusian monks from Tarragona, who converted it into a monastery, which remains remarkably well preserved to this day. Much of its present fame is due to the French writer George Sand, who with her children and companion, the composer Frédéric Chopin, lived here for four months in 1838–39. Sand’s acerbic account of their stay is commemorated in her 1842 novel, A Winter in Majorca. The Old Town’s narrow cobbled lanes are lined with solid stone houses, as well as a handful of bars and restaurants, while the views of the surrounding valleys are breathtaking. An enjoyable place to spend the night, especially as most day trippers leave by the early evening, there are a couple of appealing hotels where you can find accommodation. 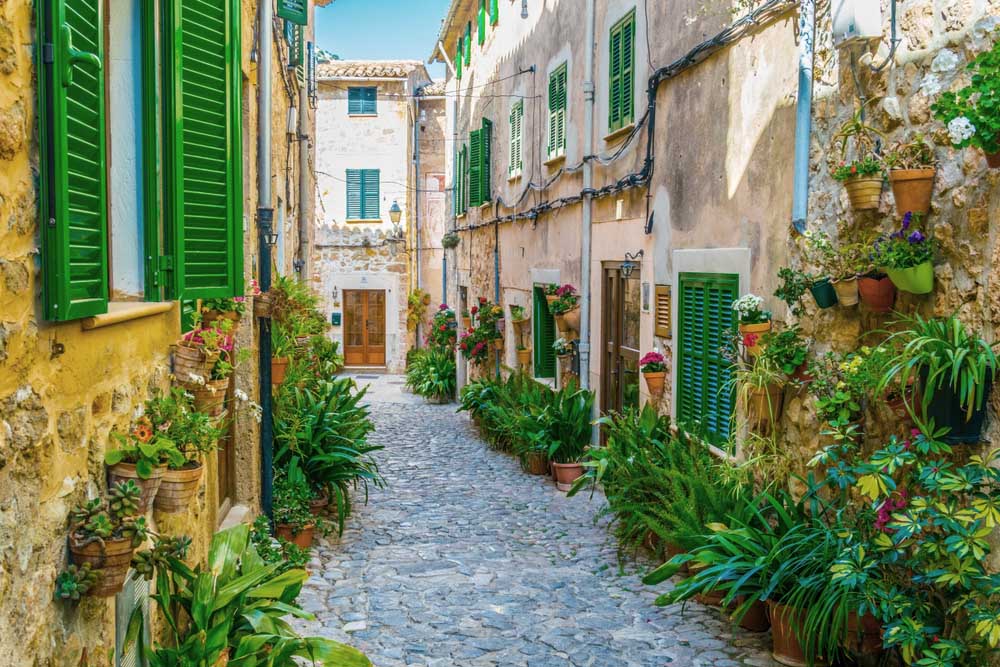 Insight Guides can help you plan and book fantastic trips to Spain. Simply get in touch with us to share your ideas for the trip and let us know when you would like to travel. Our local experts will then create a personalised itinerary exclusive to you and your requirements, which you can amend until it's exactly how you want it before booking. You can browse our existing itineraries for inspiration, and keep in mind that they can all be tailored to suit your specific requirements.

The hotels were fabulous and we were greeted and treated with care. The itinerary proved outstanding. The drivers were wonderful. He was always on time, made changes to shift stops around to make the history more evolutionary and he was so knowledgeable... Read more

The hotels were fabulous and we were greeted and treated with care. The itinerary proved outstanding. The drivers were wonderful. He was always on time, made changes to shift stops around to make the history more evolutionary and he was so knowledgeable about the history and included other very interesting facts. He made the vacation exceptional. We were just so pleased. I want to thank you and the team that made this so memorable for us. We fell in love withe Portugal thanks to you.