15 things to do in Girona, Spain

In the heart of Catalonia, the charming city of Girona offers a wealth of historical interest. Its medieval architecture and walled Old Town are complemented by fascinating museums and world-class gourmet dining. Here is our guide to things to do in Girona, Spain. 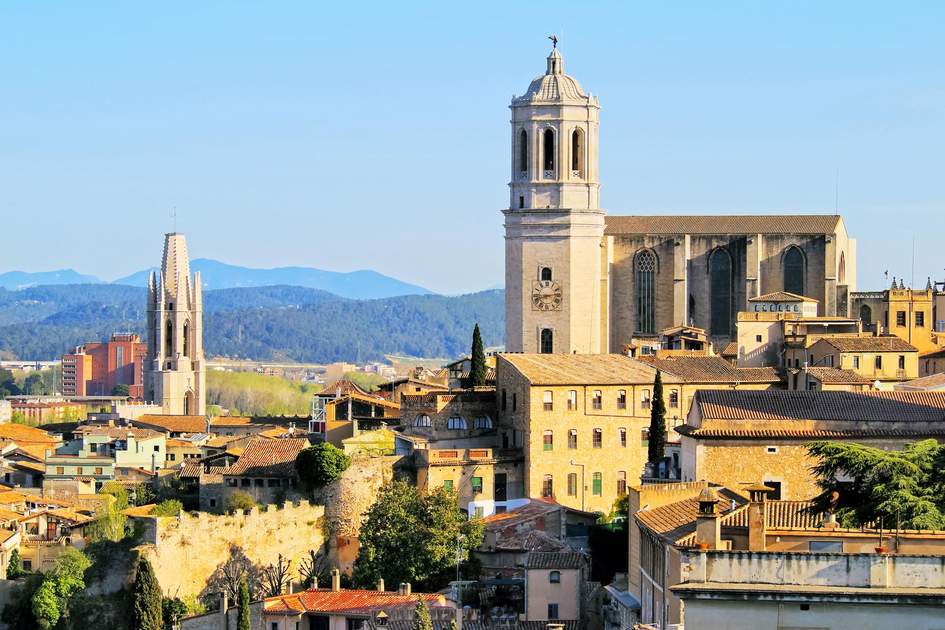 How to get to Girona

Girona is the largest city in the north of the Catalonia region. It is located 65km (40 miles) from the border with France and around 100km (62 miles) from Barcelona. Girona-Costa Brava Airport a 20-minute drive from the city center, is served by regular domestic and European flights. Barcelona Airport El Prat, served by international and domestic flights, is a 90-minute drive away.

Adif Girona train station offers local, national and international railway services, and is on the high-speed Perpignan–Barcelona line. The city bus station is directly opposite the train station.

Where to stay in Girona

Girona has a wide variety of accommodation in or close to the city center. Hotels range from upmarket to relaxed, and there are apartments, guesthouses and hostels to suit all tastes. The tourist office offers a broad range of options and is a good place to start looking for places to stay, as well as to find tourist information on Girona, Spain.

Places to visit in Girona

There are abundant things to do in Girona, from cultural activities and gourmet dining to relaxing in attractive hotels and simply soaking up the atmosphere. Originally a Roman settlement, the city was completely surrounded by walls until modern times. It was so regularly besieged during its history that it became known as ‘the city of a thousand sieges’. Today, Girona is a wonderful destination for a city break in Catalonia. Here is our guide to places to visit in Girona, Spain.

Girona's monumental Cathedral is famous for having the widest Gothic nave in the world. Standing impressively at the top of a long flight of stone steps the church is certainly one of Girona's top attractions. Construction of this superb basilica began in 1312 and took more than four centuries to complete. Several architectural styles, including Renaissance and Romanesque, have left their mark on it. The entrance charge covers admission to the cathedral, its cloisters and the museum. The latter houses a fine collection of ecclesiastical treasures, including wonderful medieval tapestries and manuscripts.

2. Old City and the Call

Girona is known for its Ciutat Antiga (Old City) and especially its 13th-century Jewish Quarter. Known as the Call, the district is considered to be one of Europe’s largest and best-preserved Jewish quarters. Built on a hill, the Old City is also known for its charming stone stairways. One famous flight leads up to the Esglesia de Sant Marti, while the Baroque escalinata consists of 96 steps climbing up to the cathedral. The River Onyar separates the Old City from the modern neighborhoods, which lie to the west of the river. 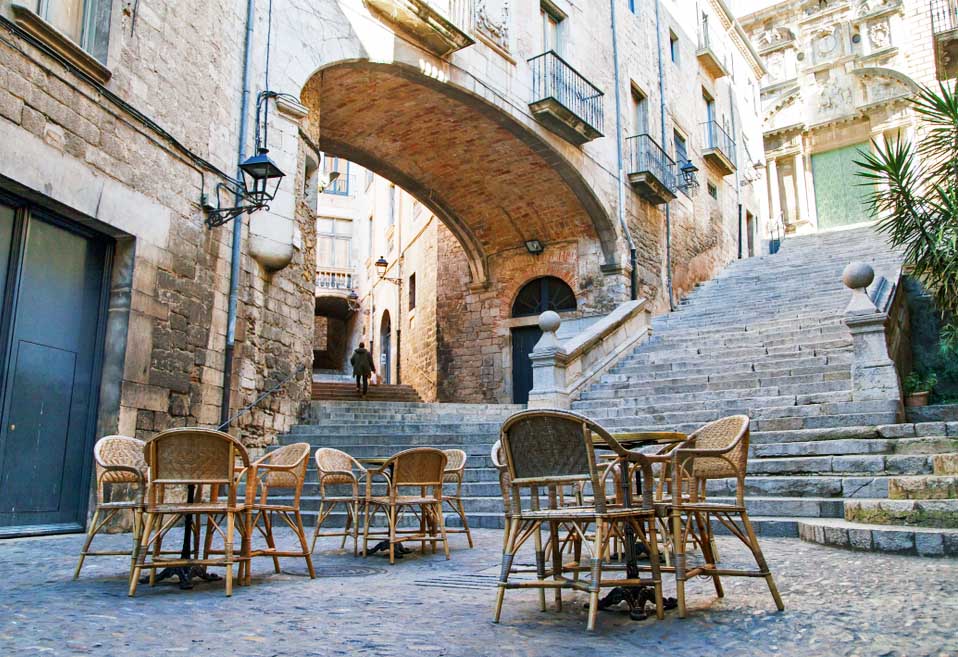 Occupying the building which housed Girona’s synagogue during the 15th century, a visit to the Museum of Jewish History offers an insight on the story of Catalonia's Jewish communities. Carefully researched and displayed artefacts, including manuscripts and illuminated books, detail the history of Jewish communities in Girona and Catalonia throughout the entire medieval period.

The footbridges over the River Onyar provide some of Girona's most unforgettable views, including reflections of the colorful buildings standing on the banks of the river. The 12th-century Sant Pere de Galligants church and monastery houses a museum exhibiting archaeological artefacts, and features a delightful Romanesque cloister dating from 1154. From here you can start a walk around the ancient city walls as far as the central Placa de Catalunya.

Dating from the 12th century, the Monastery of Sant Pere de Galligants in Girona is one of the most notable examples of Romanesque architecture in Catalonia. The elegant church is a basilica featuring three naves separated by pillars supporting semicircular arches, and has four apses with fine stone carving throughout. Above the main entrance, a striking rose window has a diameter of around 3 meters. The church’s rectangular cloister has four vaulted galleries supported by colonnaded pillars framing a small courtyard. 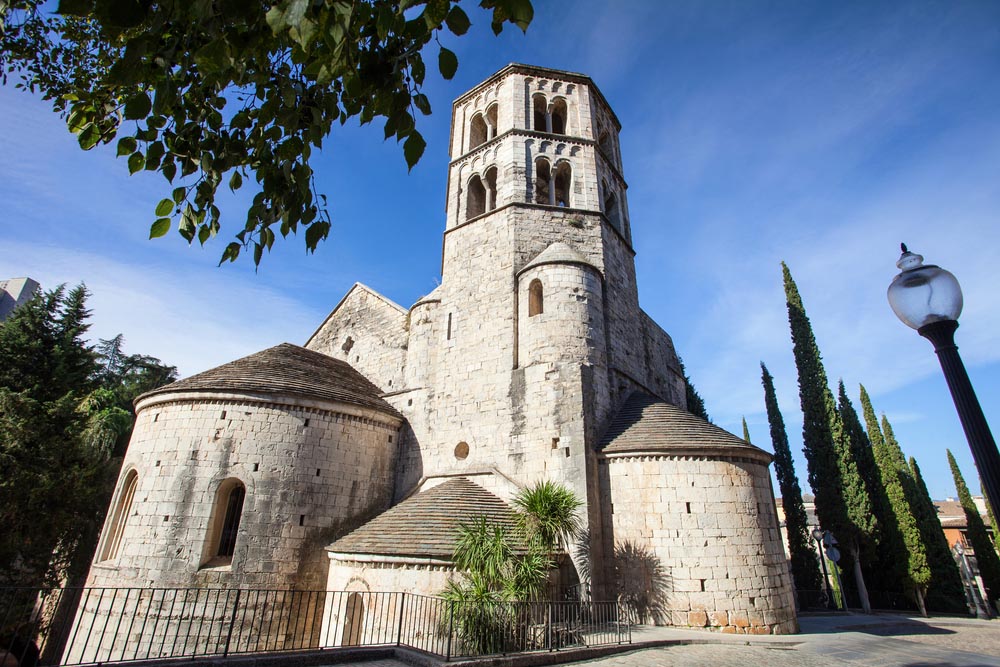 Occupying part of the Monastery of Sant Pere de Galligants, Catalonia Archaeology Museum houses artefacts unearthed at excavation sites around the region. Objects on display, ranging from tools and weapons to jewellery, pots, and urns, trace human activity in the region from the first signs of settlement during the Paleolithic period up until the late Roman era.

With parts of it dating from the early days of Christianity, the Basílica de Sant Feliu was Girona’s main church before the cathedral it stands adjacent to was constructed. Displaying a range of architectural styles, the building has a Baroque facade, numerous Romanesque features, and a striking, elegant Gothic tower. The church houses some notable works of art including eight carved sarcophagi and a sculpture of the Recumbent Christ by the 14th-century Catalan sculptor Aloi de Montbrai. 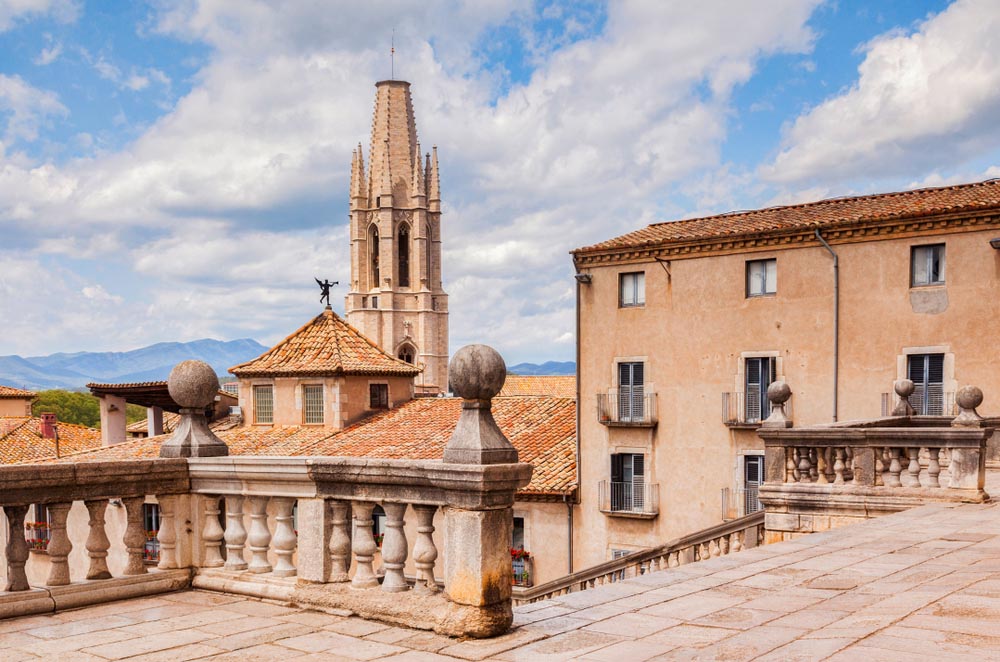 Housed in an 18th-century former monastery, Girona History Museum traces the evolution of the city from when human remains were first found in the area, right up to the shift to democracy after the collapse of the Franco dictatorship. Displayed chronologically through fourteen rooms, exhibits detail the foundation of the city, medieval times, modern Girona, and the period during the Spanish civil war.

Girona’s Museu del Cinema explores the history of cinema through a fascinating permanent exhibition. Featuring items from the Tomàs Mallol Collection acquired by the museum, exhibits of objects from the pre-cinema era and the early period of the age of cinema offer a fascinating insight on the emergence and development of motion pictures, a medium which is now one of the major forms of entertainment around the world.

Set in the heart of Girona’s Old City, between the Basílica de Sant Feliu and the city wall at the foot of cathedral, the well-preserved Banys Àrabs (public baths) were built in the Romanesque style in the 12th century. Visitors can take self-guided tours through the four areas of the complex, including the apodyterium (changing room) with its compact octagonal pool surrounded by slender pillars, the frigidarium (cold room), the tepidarium (warm room), and the caldarium (sauna). 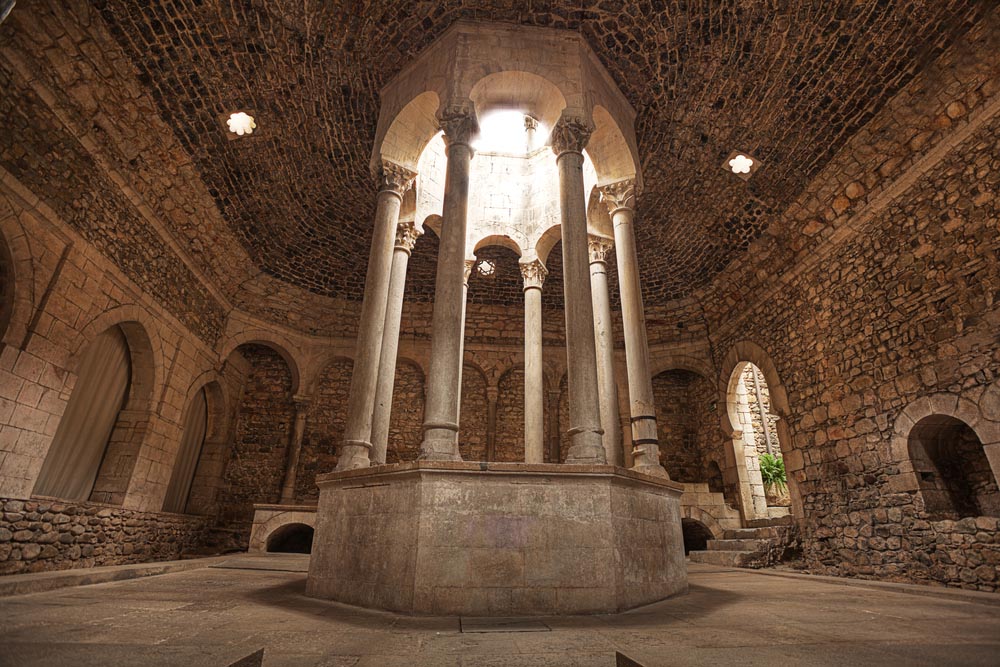 A stroll along the magnificent medieval walls is a great way to take in some of the things to see in Girona and soak up the city's atmosphere. Constructed between the 9th and 14th centuries the walls remain largely intact and various towers along their length provide vantage points with great views over the city. The most southerly point of the wall ends close to the Plaça de Catalunya where the Torre de Sant Domènec is an excellent observation point. 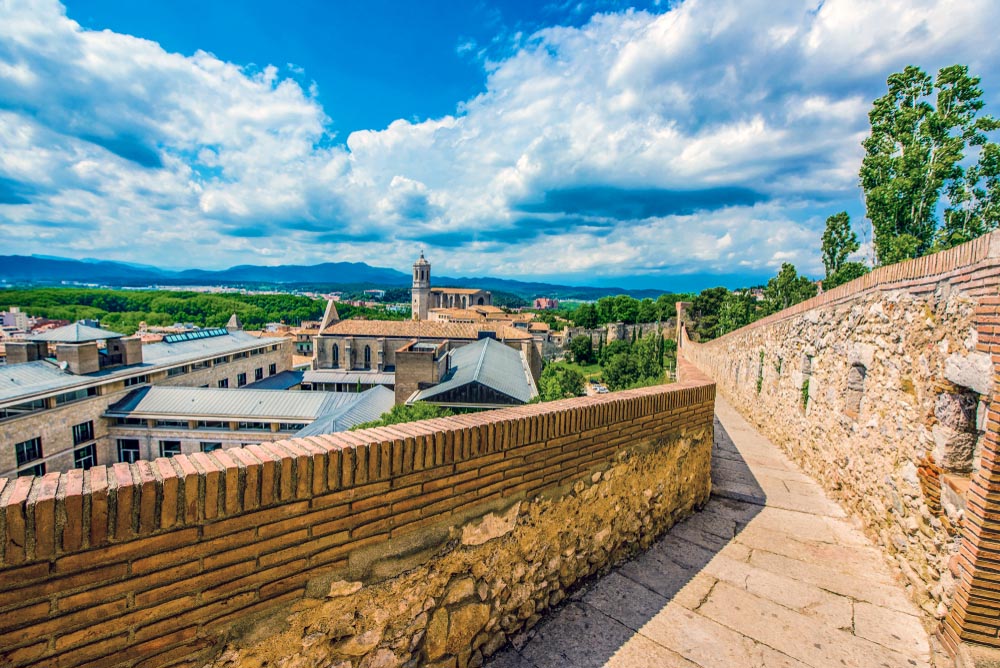 Girona is home to the Michelin-starred El Celler de Can Roca. Twice ranked number one in the world by The World's 50 Best Restaurants, most recently in 2015, it currently stands at number three on the list. Run by the trio of Roca brothers, this acclaimed gourmet eatery serves creative Catalan cuisine that you can relish across two tasting menus, complemented by expertly paired wines. If you have a sweet tooth, head to the much-loved Rocambolesc ice cream parlour in the centre of Girona, which offers a menu of tempting artisan desserts. 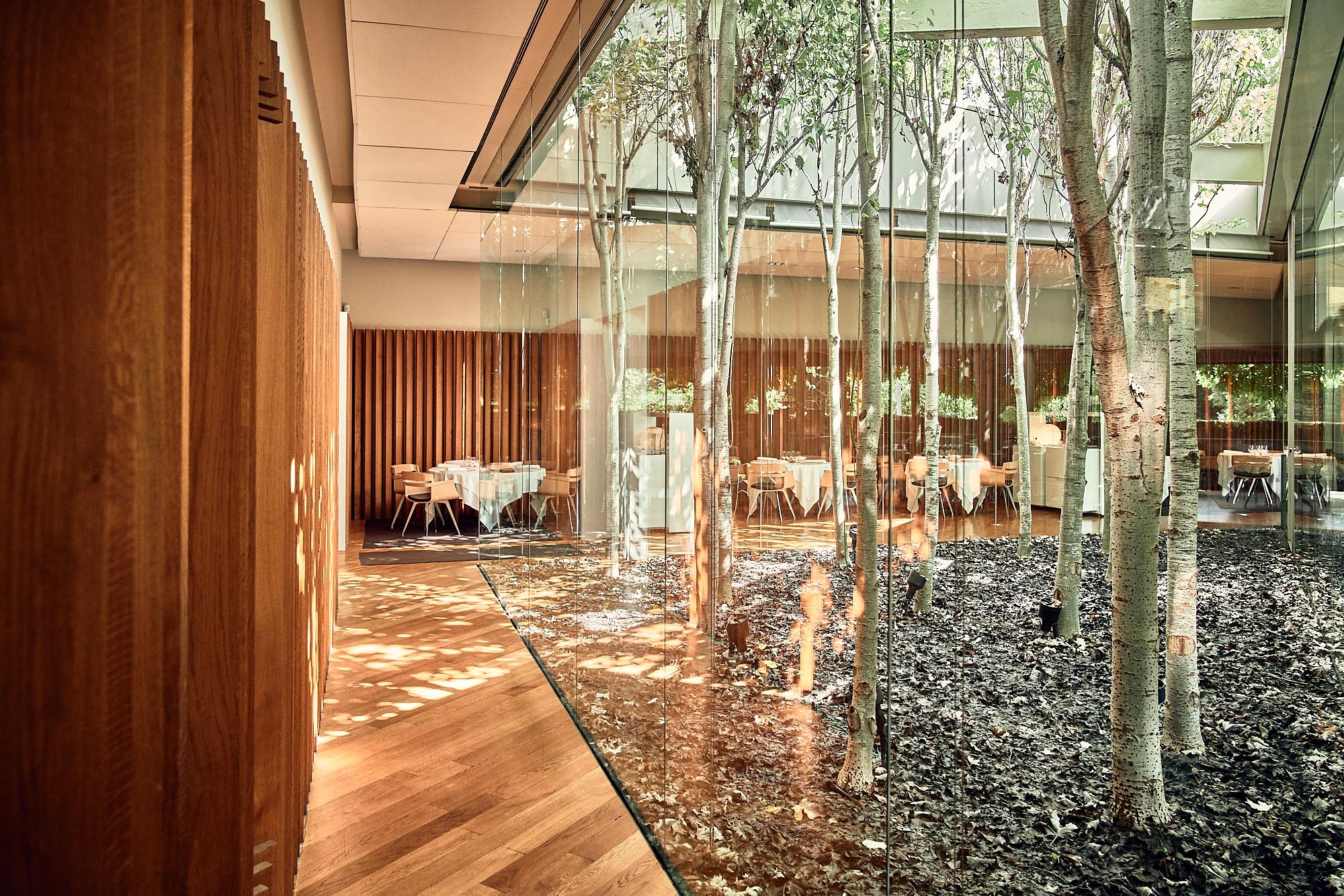 The grand Independence Square on the fringe of Girona’s Old City makes for a lovely location to enjoy a coffee or a glass of wine. A porticoed plaza laid out in the neoclassical style, the square is overlooked by elegant buildings and lined with numerous cafés and restaurants. In the middle of the square, a monument to those who defended the city in 1809 was created by the Catalan sculptor Antoni Parera in the late 19th century.

Framed by the River Ter to the north and the Onyar to the east, the Parc de la Devesa is the largest green space in Girona. Wooded expanses and tree-lined avenues are complemented by picnic areas and sports pitches, as well as gardens with a fountain and numerous interesting plants and shrubs. 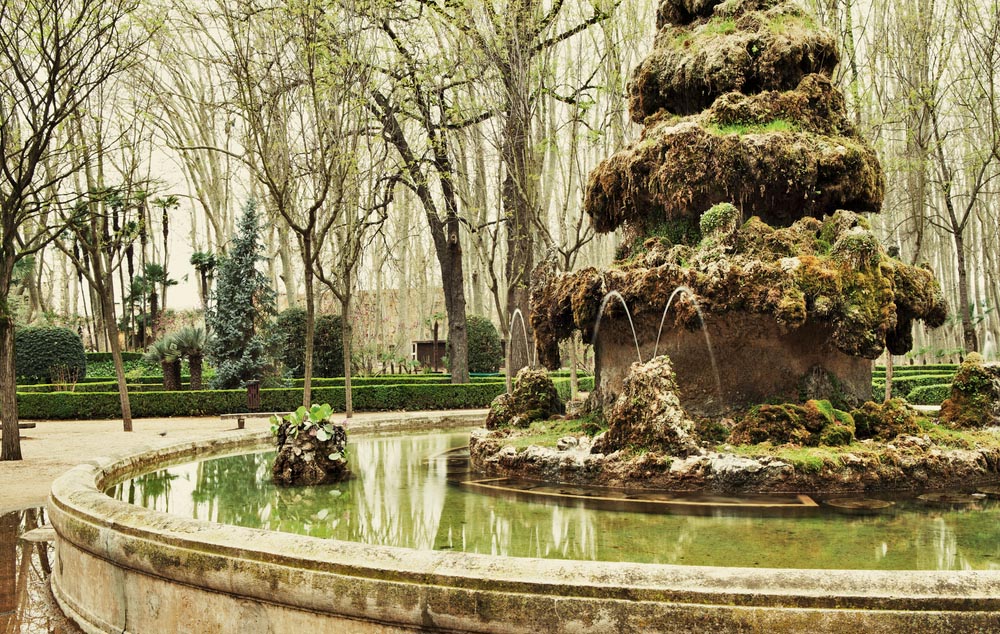 Our local experts can organize fascinating cultural trips for you in Spain. Simply get in touch, letting us know when you would like to travel and your ideas for the trip. We will then create a personalized itinerary especially, which you can amend until you are totally happy with every detail before booking. Browse our existing itineraries for inspiration, and keep in mind that all of our planned itineraries can be fully tailored to meet your own specific requirements.

I just returned from a wonderful trip to Spain. The accommodations were wonderful, the tour guides terrific and the logistics went incredibly smoothly. Antonio and the staff were wonderful to work with. They listened to what we had to say and worked with us to create the exact itinerary we wanted. They gave us great advice and made our vacation everything we wanted it to be and more. I would certainly use them again and recommend them to anyone planning a trip.