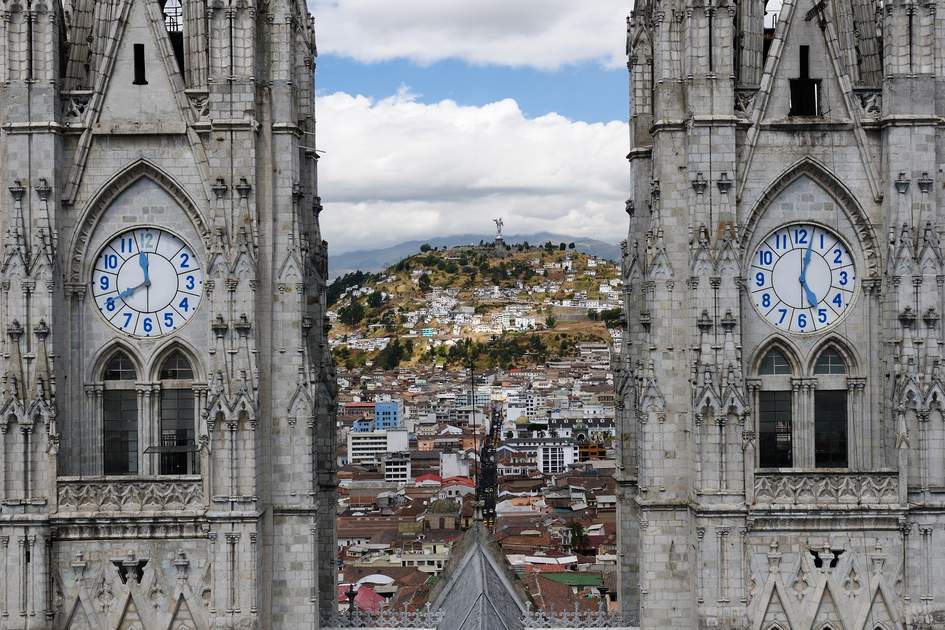 Surrounded by snow-capped volcanoes but only 24km (15 miles) from the equator, Ecuador's capital, Quito, is a strange and beautiful city with a year-round spring-like climate. Although an important city in Inca and pre-Inca times, its original buildings have been erased, and today it is divided between the colonial architecture and sculpture of its Spanish conquest days and the clean lines of its modern section. This combination of superb, well-preserved colonial churches and convents, shining glass and sleek contemporary architecture makes Quito one of the most beautiful cities in the whole of Latin America.

Here, in no particular order, are our top 10 favourite things to see and do in Quito.

In order to get an idea of the city’s layout before you start exploring, it’s a good idea to head to one of the many viewpoints that offer panoramic views of Quito and the surrounding volcanoes. Cerro Panecillo, a hill dominating the Old Town and topped by a statue of the Virgin of the Americas and an observation deck, lures those who want to survey the basin in which Quito sits. A series of steps and paths from García Moreno and Ambato enables you to walk up the hill but visitors are strongly advised to ascend El Panecillo only by taxi. The hill is where an Inca site for sun worship was once located. 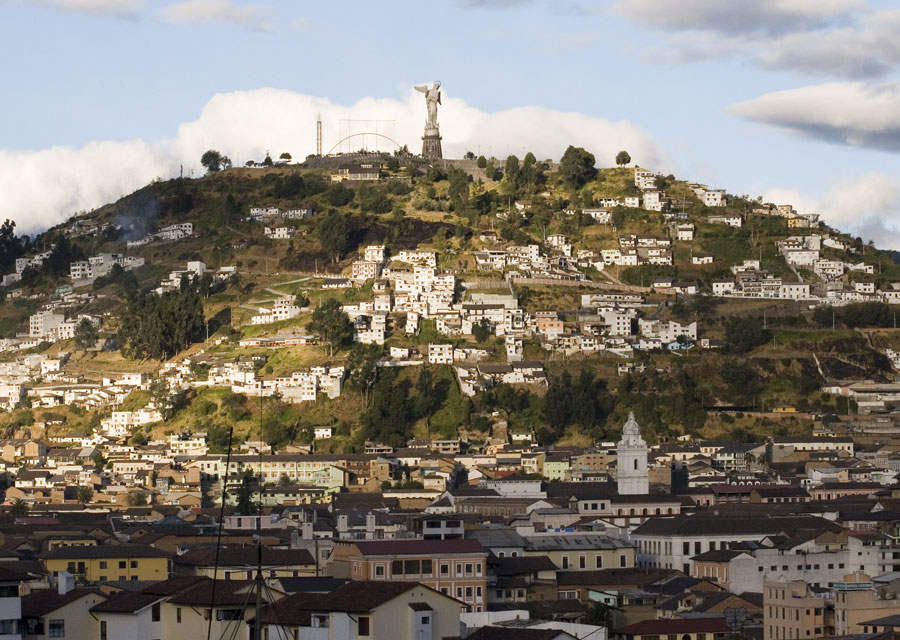 Quito’s loftiest attraction, the Teleférico, starts at the base of Volcán Pichincha and transports visitors by cable car to the top of Cruz Loma at an altitude of 4,270 meters (14,000ft). The views over Quito and of the surrounding mountains are breathtaking, as is the altitude itself. From Cruz Loma, you can hike to the summit of Rucu Pichincha and back in five to six hours. Be prepared for the cold, and take things slowly in the thin air: the oxygen bar at Cruz Loma is not just for fun. Back at the cable car’s base, the slightly tacky Volcano Park has a number of restaurants, a disco, gift shops, and a small amusement park that is good for children. The line to get on the cable cars tends to grow as the day goes on, so try to get there early. 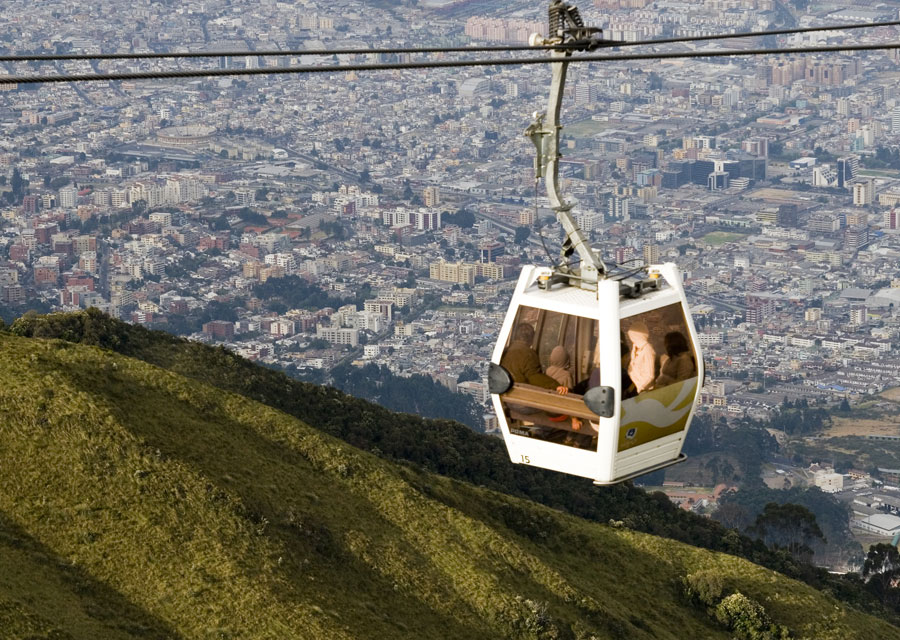 The heart of the historic center is the Plaza de la Independencia. Also known locally as the Plaza Grande, this garden-graced square is dominated by La Catedral Metropolitana (Metropolitan Cathedral). At the center of the plaza is a bronze and marble monument celebrating Ecuador’s first declaration of independence against its Spanish conquerors, in 1809. Quito’s cathedral is believed to have existed first as a wood and adobe structure before the official church was built on the site in 1565. 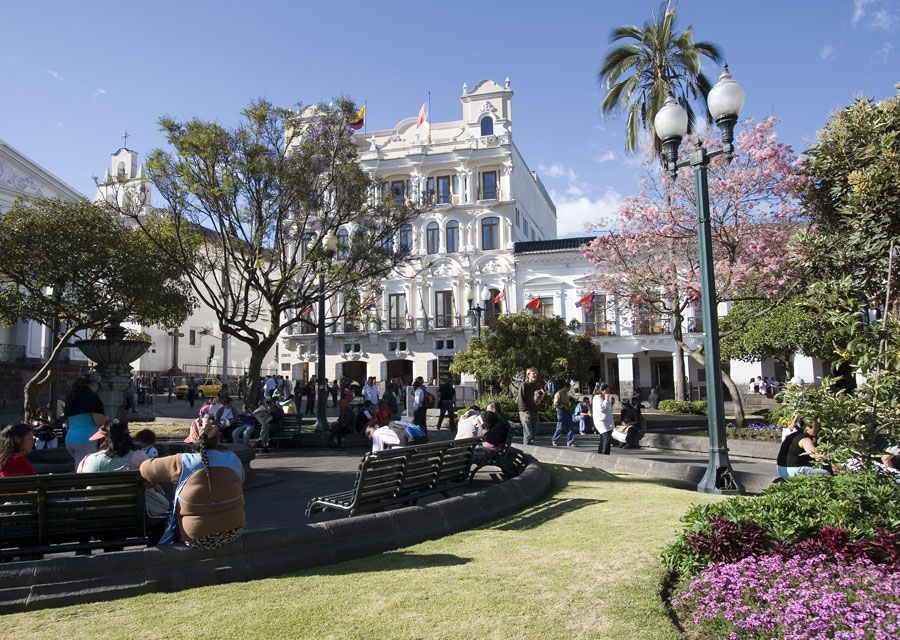 This impressive 16th-century Jesuit church took 163 years to finish and is the most ornate in the country. It was severely damaged by the 1987 earthquake, but FONSAL, the Cultural Heritage Protection Fund, finished extensive restoration in 2002. Richly intricate both inside and out, it is a masterpiece of Baroque and Quiteño Colonial art: its altars are covered in gold leaf and the fine paintings on its vaulted ceiling have earned it the nickname “Quito’s Sistine Chapel.” The walls are covered with School of Quito murals. The designs on the columns inside the church clearly show a Moorish influence, and the columns themselves are said to be copies of those by Bernini in the Vatican; they are reproduced in the main altar. 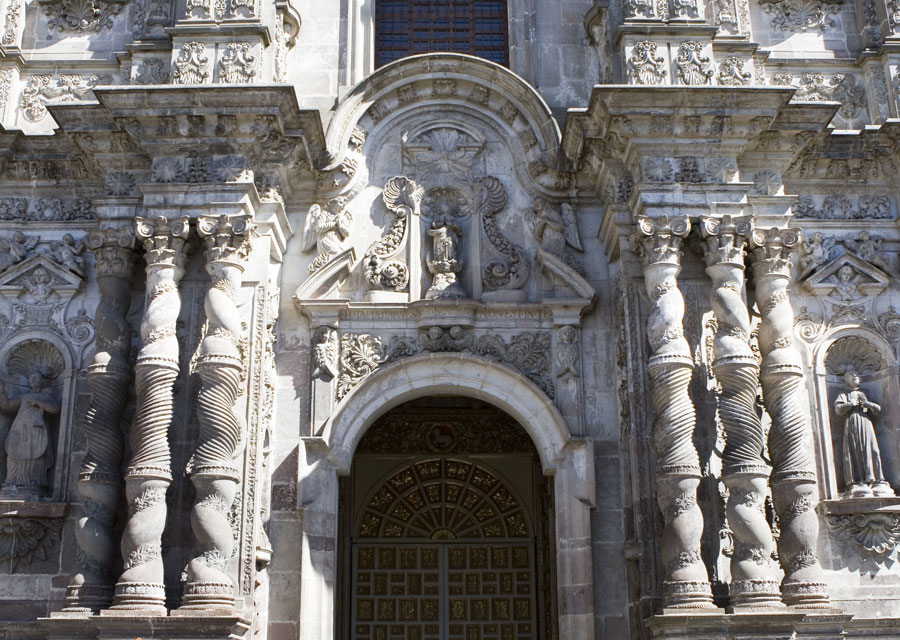 Calle Juan de Dios Morales is more commonly known as La Ronda and is the most romantic slice of colonial Quito, with its bright white houses trimmed with ornate balconies and geraniums, and brightly painted window frames and doors opening out onto the narrow, cobbled street. Restored around 2005, La Ronda has become a mix of old-time artisans selling items such as ornate church candles and Panama hats, historic, working-class inner-city housing and popular cafés and restaurants with a bohemian feel. La Ronda’s name comes from the guitar serenades (rondas) that drew crowds here during colonial days. Take care here at night, when only the guard-patrolled street of La Ronda itself is safe. 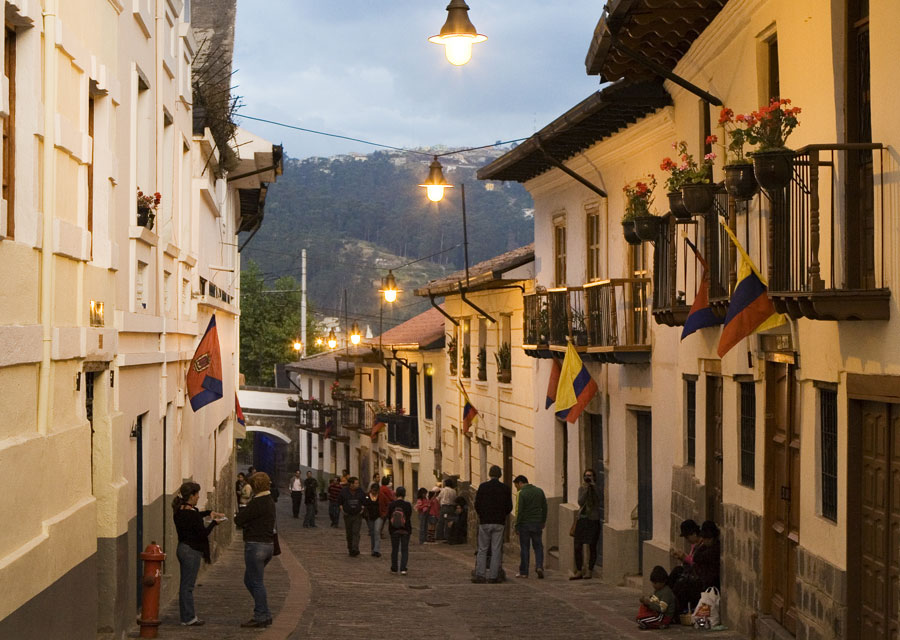 The expansive Plaza San Francisco is named for its monastery church, El Monasterio de San Francisco, honoring Quito’s patron saint. The Flemish missionary Fray Jodocko Ricke directed construction of the church and monastery on the site of an Inca palace only 50 days after the city’s 1534 founding, making this the American continent’s oldest church. The San Francisco religious complex is the largest structure in colonial Quito, with a sumptuous Spanish Baroque interior. The indigenous heritage of Quito is also represented in this Christian enclave; the church ceiling is decorated with images of the sun, the Inca divinity. 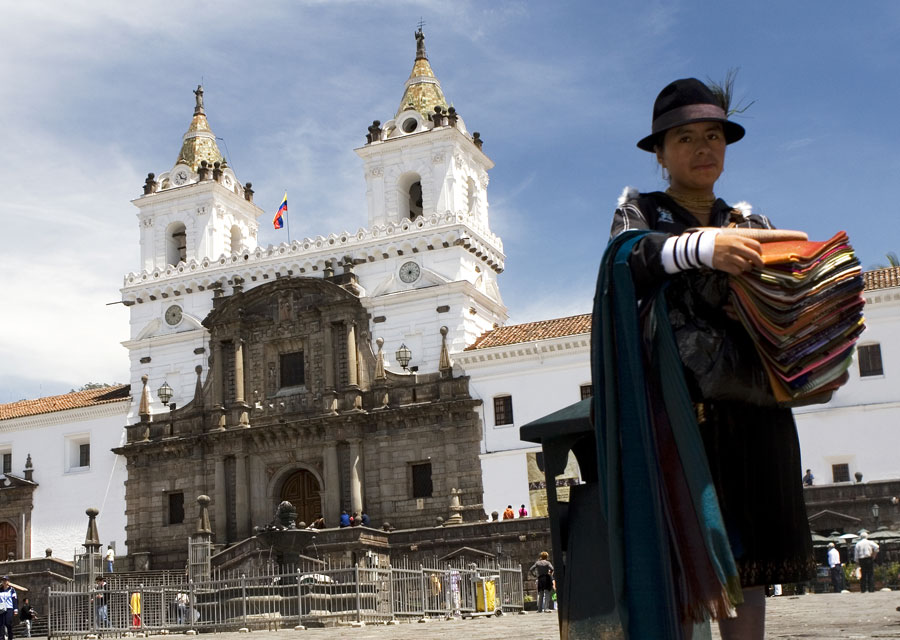 This gorgeous Art Deco theater was inaugurated in 1933, and soon became the setting for the very best operas, ballets, concerts, and theater pieces seen in Ecuador, as well as a meeting place for high society. The theatre suffered a disastrous fire in 1999, but a painstaking restoration returned it to its former glory and it is now once again home to the best of Ecuadorian performing arts.

This magnificent church took over 100 years to build and was not completed until the mid-20th century. The largest Gothic basilica in Latin America, it is intricately decorated with gargoyles inspired by Ecuadorian fauna, and has a soaring 114-meter (376ft) spire that you can climb for expansive views over both the Old and New towns.

This museum is located in one of the city’s most beautiful modern houses, perched on a hillside overlooking Quito. The museum contains perhaps the most intriguing colonial art collection in the city. Set up by artist Oswaldo Guayasamín, the complex is divided into three parts: a colonial art gallery (housing Guayasamín’s own collection), the artist’s gallery, where he displayed and sold his artworks, and a studio used by himself and his students. Provocative and political, Guayasamín’s art made him the country’s best-known artist, and the gallery of his works is considered a national treasure. Guayasamín was born of an indigenous father and mestizo mother, and much of his work represents the struggles and sufferings of indigenous people.

The Capilla del Hombre is one of the most exciting contributions to Latin American art in recent years. There is a large collection of the artist’s work including paintings, sculptures, and an eternal flame set in the center in defense of peace and human rights. The museum, modeled on an Inca temple, is dedicated to the values of the pre-Columbian man and his struggle against colonization. Set in picturesque gardens, the chapel overlooks the city. If you plan to visit the Museo Guayasamín as well, it is best to take a taxi here first and then walk the five blocks to the museum. After your visit to the museum, take a stroll through the fragrant eucalyptus forests in the Parque Metropolitano, which has splendid views of Quito and the nearby volcanic peaks of Cotopaxi and Cayambe.