Top 7 most impressive buildings across Asia

From ancient temples to glittering skyscrapers, here are seven of the most spectacular architectural feats found on the Asian continent 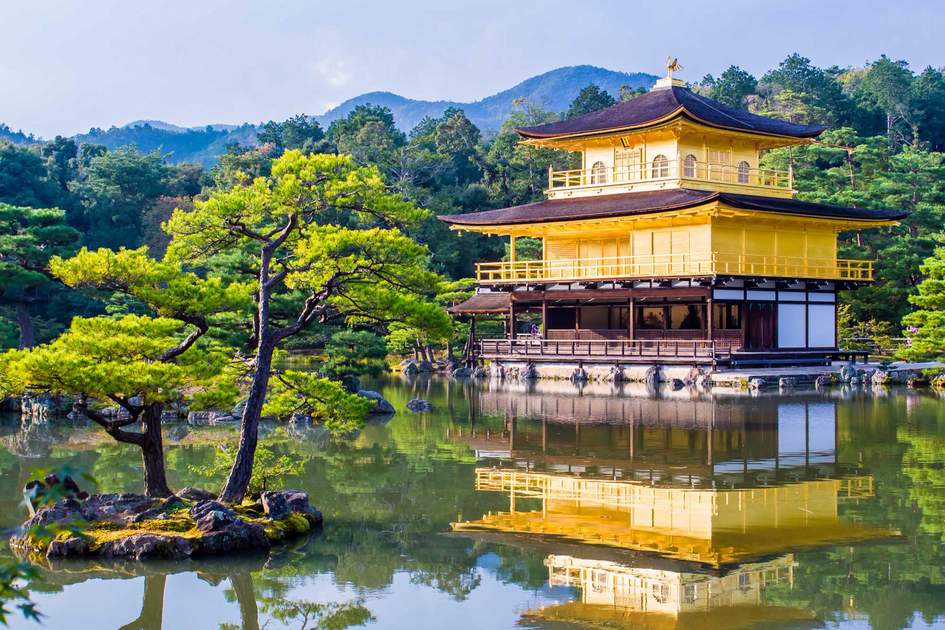 Asia is rich in culture, ecology, and architecture. The diversity of architectural styles is staggering. Imposing fortifications, stunning religious buildings and glitzy skyscrapers have all been built. Grand in scale or simply dreamily atmospheric, here are seven of our top Asian buildings:

The spectacular Taj Mahal is the most iconic of all Indian landmarks. It was nuilt by the Mughal Emperor Shah Jehan as a mausoleum for his beloved wife, Mumtaz Mahal. Amazingly,  this Unesco World Heritage Site is perfectly proportioned. The design is generally accredited to Ustad Ahmad Lahori, a chief architect. It is hard to do justice to the Taj’s atmospheric charm, which is breath-taking. 20,000 labourers and 1,00 elephants were put to work during the building process. Solid white marble had to be transported from Rajasthan to Agra. Visit this iconic structure on Insight Guides’ India’s Monuments and Tigers trip.

One of Southeast Asia’s most visited sites, Angkor refers to the sprawling complex of temples and palaces that rise from the jungle in northwestern Cambodia. Angkor Wat is in fact just one part of this Unesco World Heritage Site – but we thought we’d include the lot. Dating back to the Khmer civilisation, this is the largest religious site in the world. Angkor should be given several days if you want to explore it properly. Insight Guides’ Cambodia’s Beaches and Temples trip takes in Angkor, as well as several idyllic beaches. 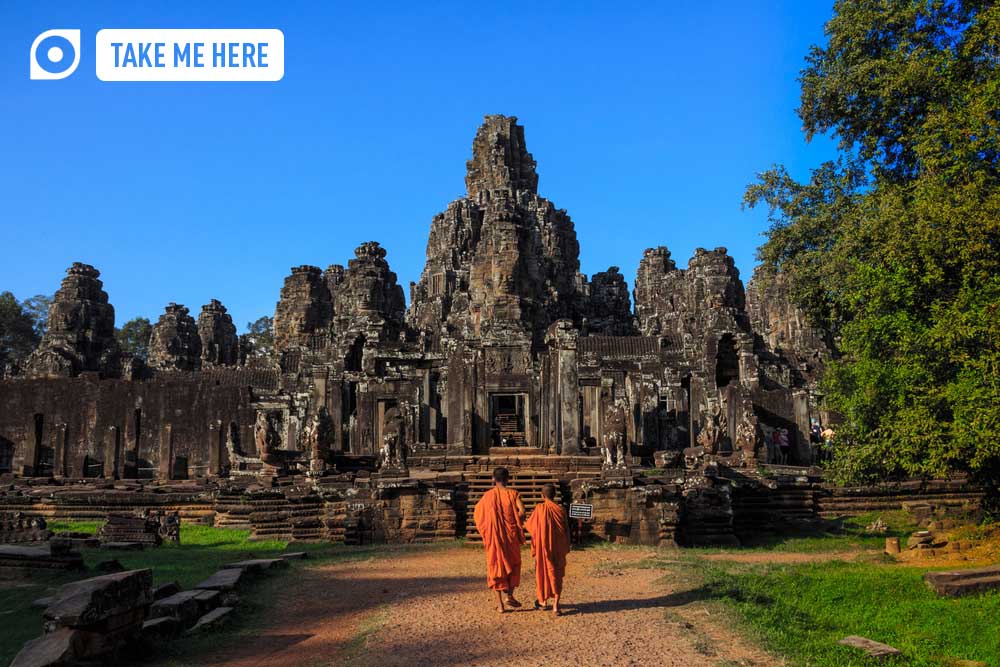 The monks alongside the ancient stone faces of Bayon temple, Angkor. Photo: Shutterstock

Amid a glittering skyline, modern skyscrapers and cavernous megamalls, the Burj Khalifa stands out – even in Dubai – as the tallest structure in the world. Visit it as part of Insight Guides’  Magnificent Emirates tour. At 2,722ft (829.6 metres), it is just under three times the height of the Eiffel Tower. The building includes the Armani Hotel Dubai,  an observation deck where you can admire the stunning views.

4. The Great Wall of China

The Great Wall of China began as a series of walls. These were linked by the Qin Dynasty (221–206BC) to protect China’s northern borders from invasion. Centuries later, the Ming Dynasty reinforced the existing structure. The result was a staggering defensive feat of lofty walls, towers, garrisons, protective moats and beacon towers. While nearly a third of the wall is now gone, it still meanders through China’s hilly wooded landscapes and passes through nine different provinces. The wall stands at 46ft (14 metres) at its highest point. Visit this marvellous structure for yourself on Insight Guides’ The Best of China trip.

New Delhi’s Lotus Temple is a beautiful building with a simple and harmonious message. All faiths are allowed to worship inside the temple – there is no religious iconography. Instead, the Bahá’í faith teaches of the Oneness of Mankind. The temple was designed by Iranian architect Fariborz Sahba and consists of 27 white-marble petals. The lotus embodies the message of tolerance that Bahá’í seeks to teach. The flower is central to many world religions, including Hinduism, Buddhism, Sikhism and Jainism. The temple receives more than four million visitors annuallyBook onto Insight Guides’ From the Ganges to the Golden Triangle trip and make India your next adventure. 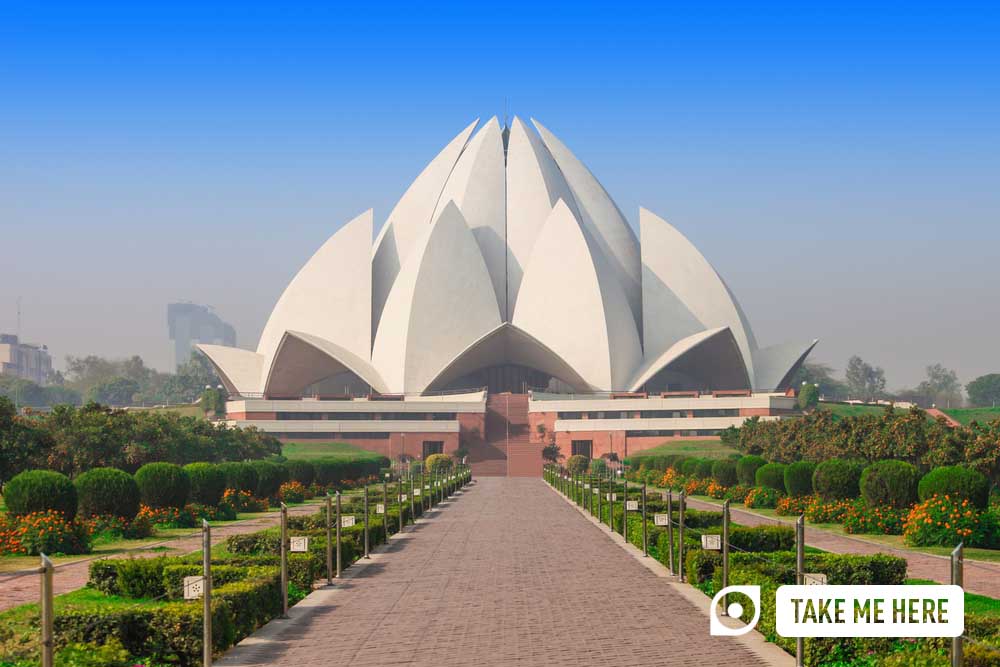 The magical Tiger’s Nest Monastery clings to a rocky cliffside in the Paro Valley in Bhutan. A temple first existed on this site in 1692. Often shrouded in mist, the climb up to the monastery may leave you breathless (no road access here). However, it is certainly worth it – the monastery is one of the most important spiritual centres in Bhutan. Visit this enchanting building by booking onto Insight Guides’ Bhutan’s Mountains and Monasteries trip today.

Nestled in beautiful garden surroundings, the shimmering Golden Pavilion in Kyoto is a dazzling sight. Built at the end of the 14th century, the building was originally a retirement villa. After Yoshimitsu’s death, the building was made into a Buddhist temple. Since then, it has burnt down several times. It was restored in both 1955 and 1987, with the gold leaf has also replaced. The temple sits harmoniously in its surroundings, with rich green trees and islands providing the perfect backdrop.

This article was originally published on December 12, 2016

Taking a holiday to Asia: how to get started

Insight Guides can help you with planning, organising and booking your trip to multiple destinations in Asia. Simply, get in touch and share your budget, interests and travel style. Our local experts will create an itinerary exclusive to you and your requirements, which you can amend until it's just right. Alternatively, browse and modify ready-made holidays to create your dream trip today.

Had an awesome experience. Must plan your travel with this company.