The archipelagic nation of the Maldives is made up of hundreds of coral islands in the Indian Ocean. Known for its white sand beaches, lagoons and extensive reefs supporting abundant marine species, it is the perfect diving destination. Here is our guide to diving in the Maldives. 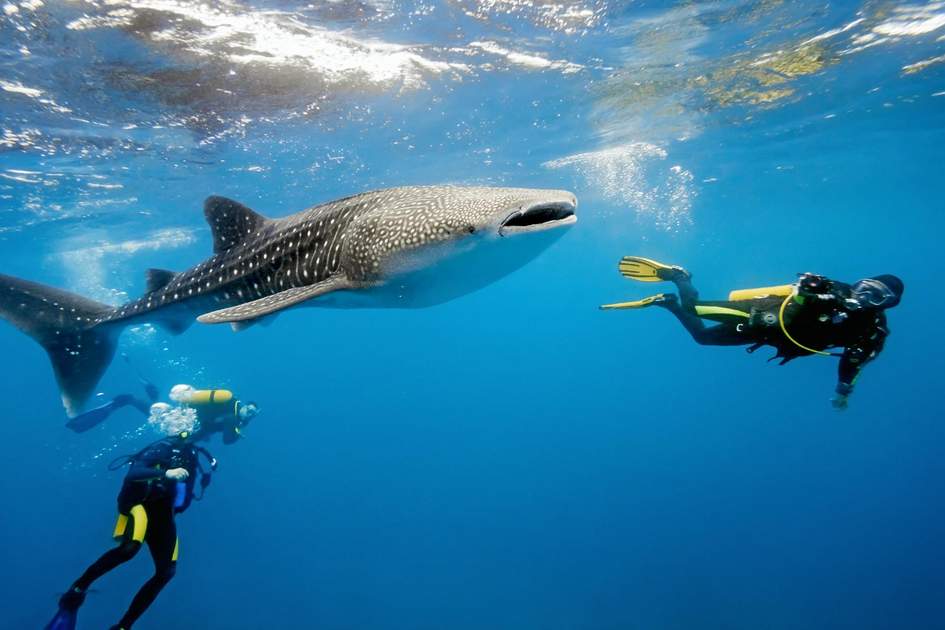 With year-round warm water (28°C on average), a plethora of marine life and five percent of the world’s coral reef area, the Maldives offers some of the best diving in the world. There are numerous dive centres offering introductory, refresher and PADI courses, as well as a range of escorted dives to reefs and wrecks on boats from the resorts. Go between January and April for the clearest waters, with visibility ranging from between 15–40 metres depending on the dive sight and time of year, or in the off-season (May–December) for quieter exploration. Whenever you travel, it’s always a good time to visit our selection of the Maldives’ top five dive sites.

Known as one of the best dive sites in the Maldives, Maaya Thila is the place to see whitetip sharks circling the reef with the occasional grey reef or nurse shark gliding around. The site starts at around six metres deep, dropping to 30 with numerous overhangs, caves and swim-throughs for divers to explore and discover lurking barracuda, stingrays and giant trevally. Smaller species such as angelfish, lionfish and parrotfish extend the colour of the soft corals into the clear blue water, while various nudibranchs and stonefish lounge on the corals. Night dives are especially good here, with sharks becoming more active and feeding after darkness falls. 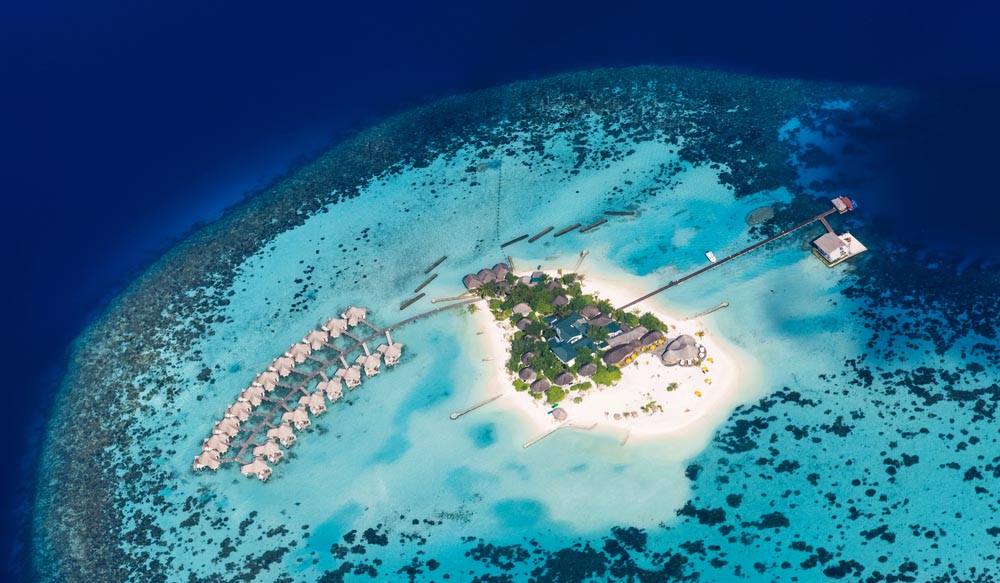 One of the islands of Ari Atoll, the Maldives. Photo: icemanphotos/Shutterstock

At the South Ari Atoll near Centara, the scuttled Japanese freighter Khuda Maa is a fantastic dive site. Descending into the blue, the ship's masts will start to appear at around 10 metres. Continue to descend and after another 18 metres the body of the ship will come into view, along with some of the larger species commonly seen at this dive site such as nurse sharks and stingrays. The main body of the 52-metre-long ship varies in depth from 28 to 31 metres, so the site is suitable for intermediate to advanced divers. A good covering of coral has grown over the carcass and there is a healthy number of snappers and horse-eye jacks living here. Lobsters and eels hide in cracks for adventurous divers to uncover and, if you're lucky, whale sharks are occasionally seen here too.

Reachable from Alimathaa, Dhiggiri and Thinadhoo, Fotteyo Kandu is a deep channel, surrounded by coral, that is bursting with marine life. The dive starts at around 22 metres, descending quickly to 40 metres or more – this is one in which to keep a close eye on your dive computer as it is easy to get carried away as you follow the coral down into the deepest depths. Intermediate and experienced divers can see a wide array of reef creatures here, including a variety of soft and hard corals which have formed large caves, enthralling swim-throughs and beguiling overhangs. Early morning divers can enjoy the best of this site, with appearances from hammerhead and grey reef sharks, eagle rays, tuna, swordfish and turtles commonly reported. Evenings frequently bring a pod of dolphins cruising through the channel. 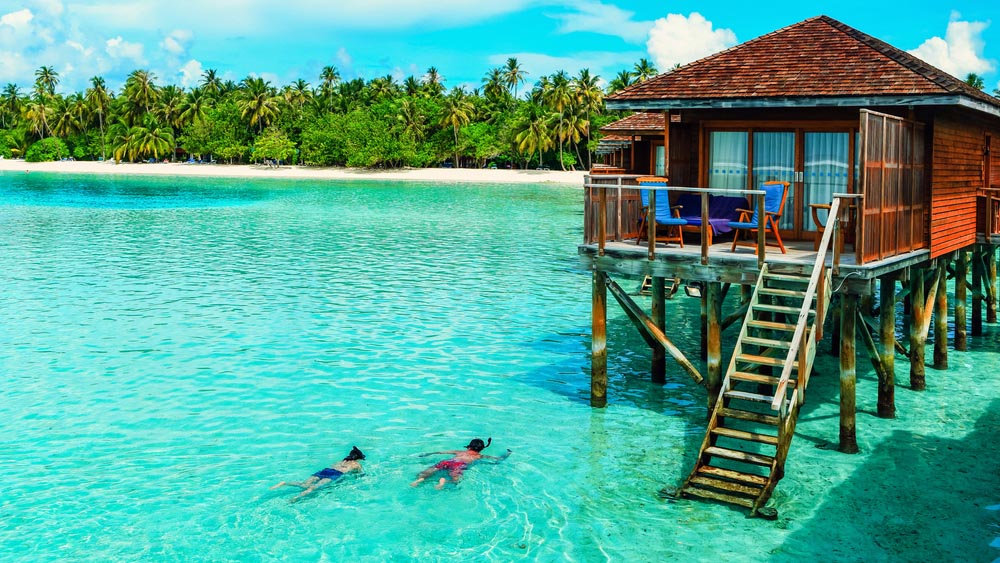 Located in the South Ari Atoll, Sun Island is one place that the elusive whale shark inhabits all year round, and consequently one of the best in the Maldives at which to spot them. Boat trips from this resort island take divers and snorkellers to the southernmost tip of the atoll to swim with these enormous creatures as well as other marine life including manta rays. For divers enjoying the coral and smaller marine life of the undersea world, a large open plateau along the outer reef makes it easier to notice any whale sharks that might be drifting along as they filter plankton from the ocean water.

Turtles glide over this shallow, dense reef which oozes colour from the variety of coral species it comprises. Located on the east side of the South Male Atoll, it is home to a number of hawksbill and green turtles which feed on the reef and hide from potential predators in its natural crevices. The reef's shallow nature (it starts at 5 metres) makes it a great spot for beginners as well as intermediate and advanced divers, who can take advantage of the low air consumption and enjoy a long, relaxed dive. A good selection of reef fish keeps all divers interested, including colourful boxfish, surgeonfish and bannerfish, as well as spotted porcupinefish. 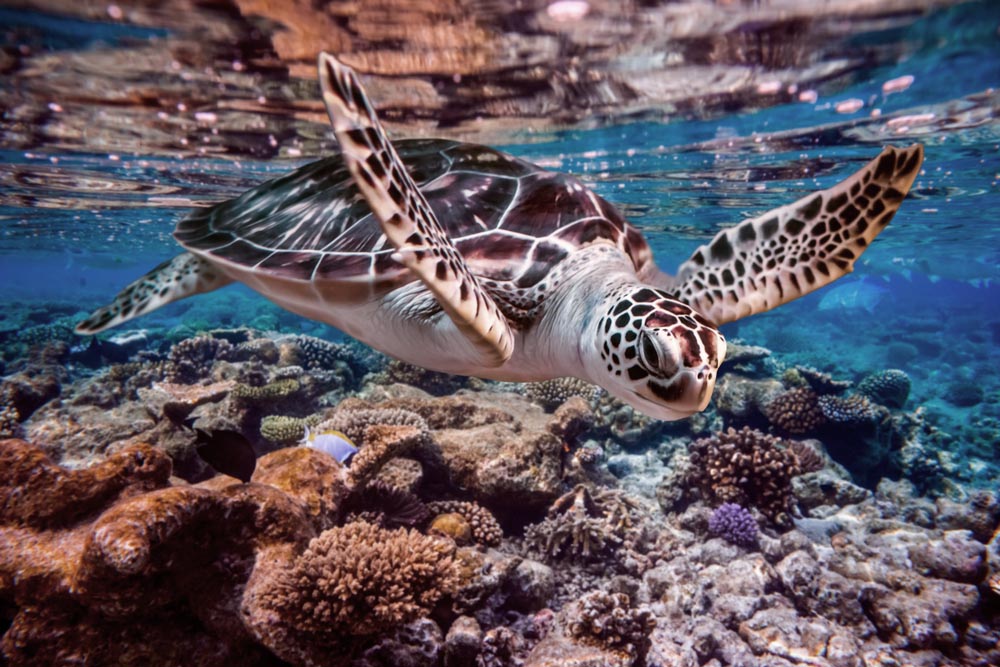 Ready to take a trip to the Maldives?

Simply get in touch with us to share your ideas for the trip and let us know when you would like to travel. Our local experts will then create a tailor-made itinerary based on your personal preferences, which you can amend until you're completely happy with every detail before booking.

Justyna was always on our service, even on the weekends, very helpful and rapid responsive. Very encouraging even if it was our 1st trip via IG and we didn't know what to expect and a bit frightened. Kind and talkative driver Jagath always helping with... Read more

The booking was perfect + flexible including my ideas + making suggestions. I was able to change as the trip went on. The driver was friendly & knowledgeable and I would love to come back.

Your local travel organizer for Maldives