Top five things to do in Auckland

With a landscape defined by volcanoes and the ocean, the major city on New Zealand’s North Island, Auckland offers urban delights, nature walks and a range of adrenaline-fueled experiences. Here is our guide to the top five things to do in Auckland. 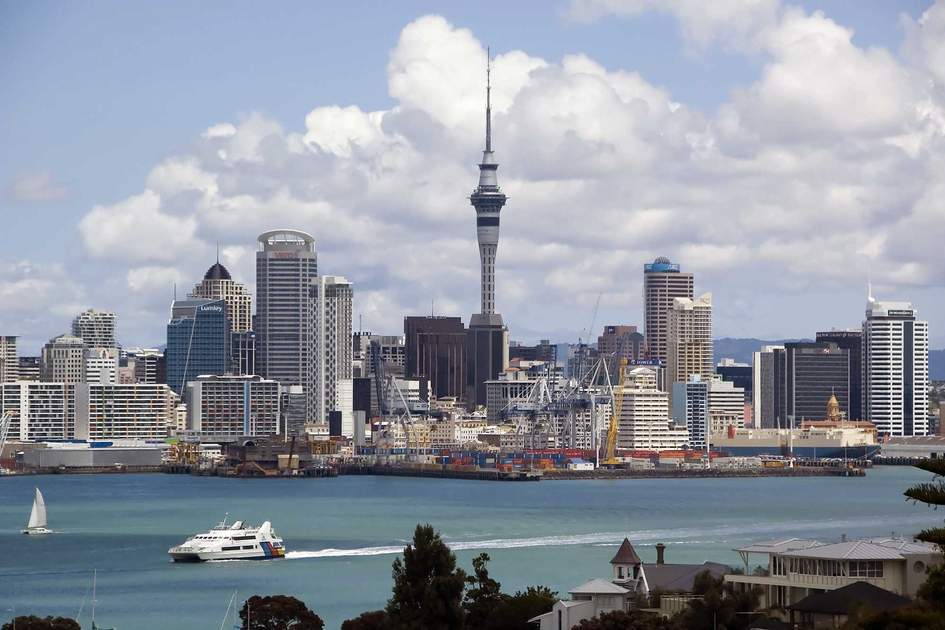 Standing 328 metres high, Auckland’s futuristic Sky Tower has been a landmark feature on the city’s skyline for more than two decades. At ground level, the Skycity complex offers a casino, a hotel and a dozen bars and eateries. High above Auckland in the revolving, fine-dining restaurant Orbit 360°, you can enjoy New Zealand-inspired cuisine enhanced by panoramic views over the city.

The top of this iconic structure also offers a number of thrilling experiences. The tamest is the viewing platform situated at 220 metres. The full-circle, glass-fronted deck offers views of up to 80km away, while sections of glass floor at regular intervals allow visitors to stand directly above, and gaze down on bustling Victoria Street below.

For a closer, less obstructed, view over Auckland, SkyWalk is an option. Secured by safety wires and a full body harness, intrepid visitors can walk around a 1.2-metre-wide metal platform surrounding the Sky Tower at 192 metres. The truly adventurous can take it one step further by launching themselves from the platform, head first, while attached to a bungee cord with SkyJump.

To continue the adrenaline rush, scale the high walkway above Auckland Harbour Bridge as traffic races along the eight-lane highway below. Spanning Waitemata Harbour, the bridge connects the city with Northcote Point, offering sweeping views across the metropolis and out over the water to Rangitoto and Waiheke Islands.

Alternatively, you can dive from the bridge’s lower level towards the harbour, dipping your head in the ocean water before being sprung back to the bridge by your bungee cord.

Unfortunately, it is not currently possible to walk across the bridge but funding has been approved for a SkyPass to be constructed along the edge of the harbor bridge so cyclists and pedestrians can also travel freely from the North Shore to the city, and enjoy the views. 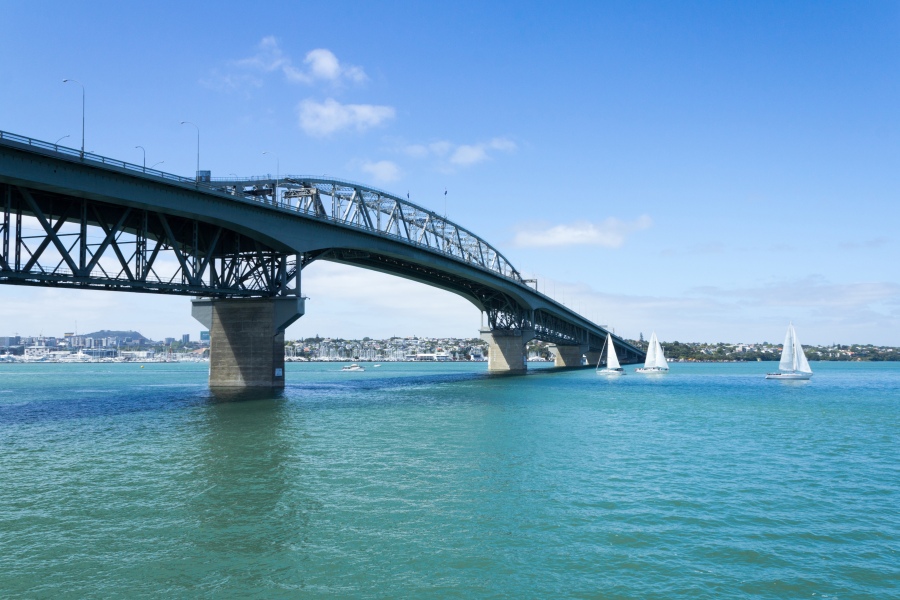 Auckland's main thoroughfare, Queen Street, stretches around 3km from the waterfront down to Karangahape Road (known locally as K Road). Skyscrapers stand alongside more traditional, low-rise buildings and the street is lined with palms and other trees, bringing a welcome splash of colour to the cityscape. Shops and eateries occupying the ground floors of these buildings represent brands ranging from high-street basics such as Cotton On to upscale couture like Dior and Louis Vuitton.

K Road is a city-centre strip and cultural hub that is home to a cluster of one-off cafés and restaurants offering a range of cuisines. Bestie Café serves an international menu influenced by countries from India to Mexico, Rasoi serves vegetarian and vegan options, while Thai, Japanese and traditional New Zealand fare can also be sampled. K Road is also good for fashion and vintage clothes stores, such as Crushes and Vixen No 8, while numerous tattoo parlours, adult shops and alternative nightlife spots at its western end complete the melange on offer in this bustling downtown destination. 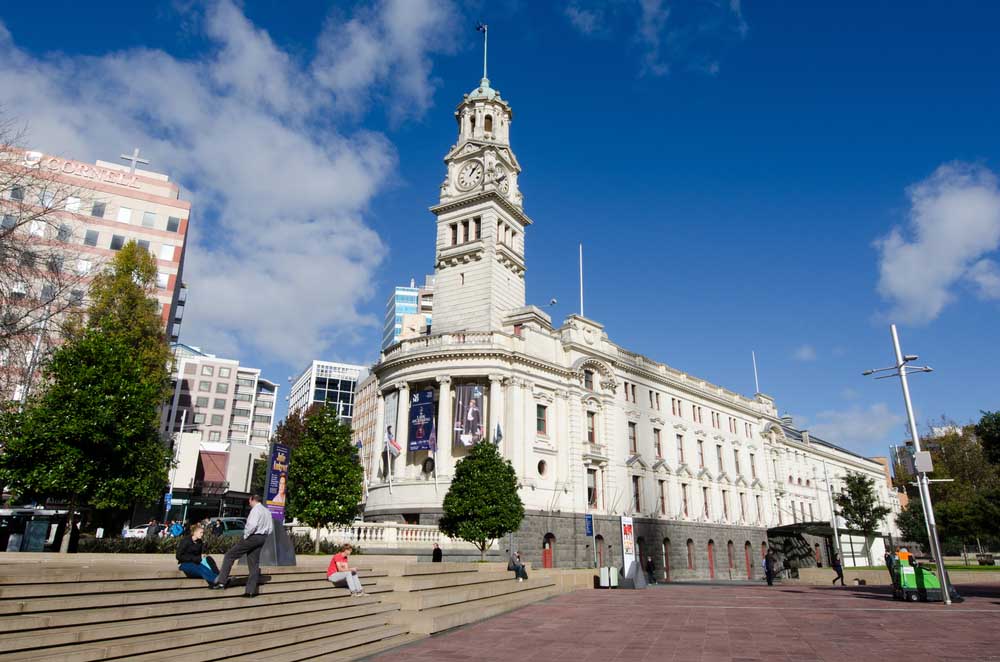 With boats and yachts moored around the marina, Viaduct Harbour makes for a tranquil place to stroll by Auckland’s waterfront. A host of stylish restaurants offer the chance to dine alfresco or while overlooking the harbour. Options include Soul Bar & Bistro, serving traditional Kiwi cuisine with a focus on fresh seafood, The Viaduct Grill which dishes up steaks and burgers, and Boracay Garden Restaurant which offers authentic Filipino dishes.

Several upmarket hotels overlook the harbour and, at night, the multitude of city lights reflect in the water, illuminating the harbour for those savouring cocktails and crisp New Zealand sauvignon blancs at outdoor tables.

New Zealand Maritime Museum details the nation's seafaring history and offers sailing trips on heritage vessels, while numerous boats in the harbour can be chartered for pleasure cruises or dolphin and whale watching excursions.

Located in the Hauraki Gulf these two islands offer a taste of paradise within easy reach of the city. Waiheke Island is the larger of the two, covering 92 km sq, and a great location in which to sample some of New Zealand finest wines. Stonyridge, nestled in a verdant valley, and Man O’ War, overlooking its namesake bay, are a couple of vineyards spearheading Waiheke’s burgeoning wine industry. Elsewhere on this verdant island, sweeping sandy bays offer opportunities for swimming and snorkeling, and there are numerous walks along coastal or bush trails. For the more adventurous, zip line tours offer the chance to choose between sailing over a vineyard or forest canopy while taking in views across to Auckland.

The cone-shaped Rangitoto Island is characterised by rugged volcanic terrain. A trail leads to the volcano’s summit where hikers can observe the surrounding land covered with dense forest. Alternatively, a 4WD ride can transport you to the peak to enjoy the views and explore the rocky landscape. Numerous nature trails offer the chance to partake in bird and wildlife watching, while water sports available on Rangitoto include snorkelling, diving, fishing and kayaking. 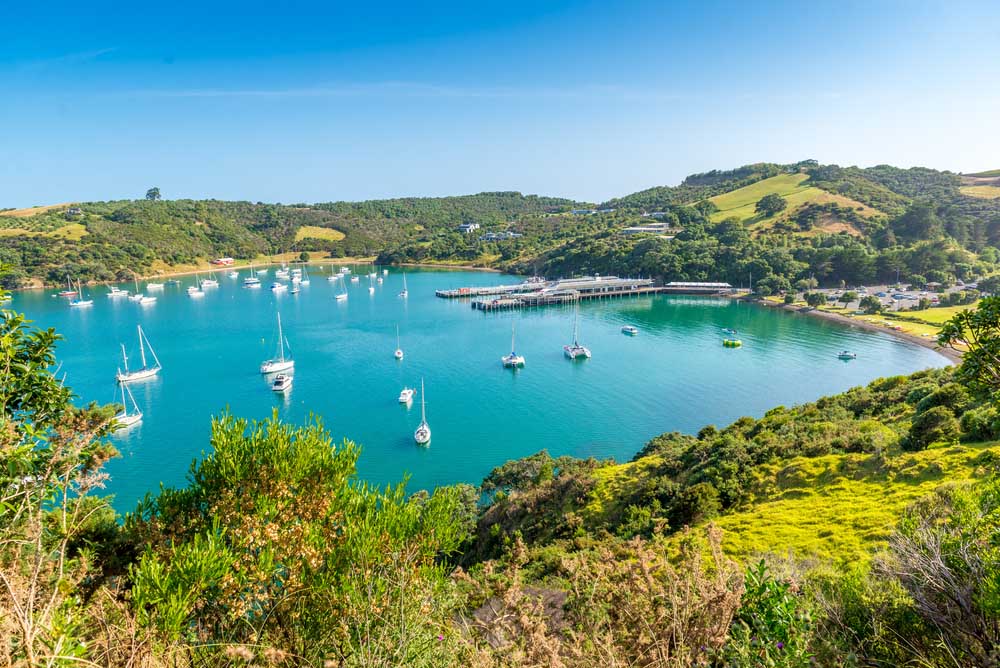 Ready to take a trip to Auckland?

Our local experts can help organise wonderful trips to New Zealand for you. Simply get in touch with us to share your ideas for the trip and to let us know when you would like to travel. We will then create a personalised itinerary especially, which can be amended until you are completely happy with every detail before booking.