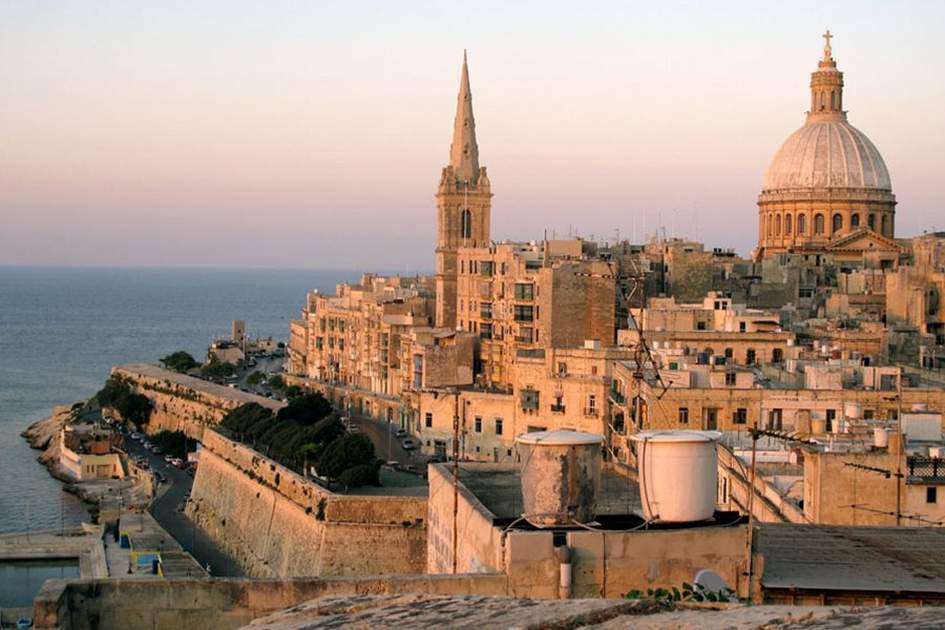 A view of Malta's capital, Valletta

Malta celebrates Victory Day, or il-Vitorja, on the 8th September. This day of festivities marks several momentous events in Malta's tumultuous history: the defeat of both the Turks in the Great Siege of 1565 and the invading French forces in 1800, and Italy's switch of allegiance to the Allied forces in 1943.

Malta is a tiny island, but, situated in the middle of the Mediterranean Sea, it occupies a key strategic position. In the past, the island provided a stop-over between Europe and the northern African coast and was regarded as a potential threat to supply lines between Naples and Tripoli if occupied by an opposing army. The armies of various nations have taken advantage of its prime position for centuries, with the people and infrastructure of the island taking a battering in the process. 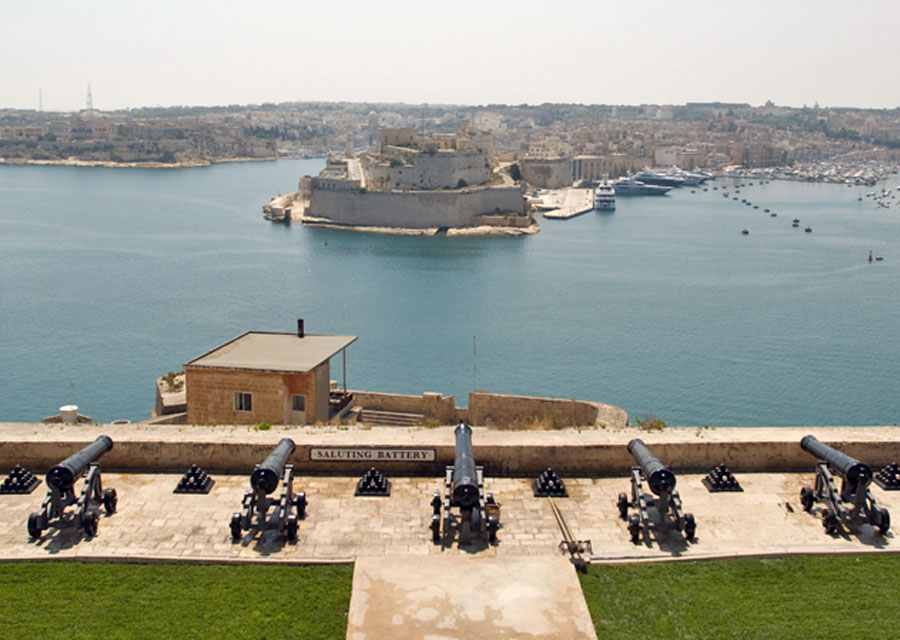 For three months, a Turkish fleet, led by Suleiman the Magnificent, lay siege to the Knights of the Order of St John. The infamous Battle of St Elmo was bitter and bloody, with the Turks finally claiming the Maltese fort. After the battle was over, the Turks - trying to demoralise the Knights further - sent five wooden crosses floating across the harbour towards St Angelo, each bearing the headless body of a Knight who had died bravely. The riposte of the leader of the Knights, Grand Master La Valette (whom the capital city of Valletta was named after), was to execute all his Turkish prisoners and to fire their heads back at the Turkish lines as cannonballs. Eventually, help arrived from Sicily. The Knights regained St Elmo and the Ottoman forces were defeated. At the time it was thought that no moment of pain or glory could match the fight against the Turks - until Malta's second Great Siege in 1940.

The French invasion of 1800

Napoleon was convinced that he needed Malta to pursue his designs on British influence in the Mediterranean in general and Egypt in particular. He invaded the island in 1800 and launched himself on Egypt after just one week. The Maltese people were furious at the looting of their palaces (Napoleon personally helped himself to the jewelled sword presented to La Valette - Grand Master during the Great Siege of 1565 - by Philip II of Spain) and the imposition of French as the island's official language overnight. They fiercely resisted the French garrison that was left behind and sought outside help from Britain and Naples. Admiral Lord Nelson and the King of Naples responded, providing ships to blockade Valletta. The French hung on in the city for two months, eventually conceding defeat and giving themselves up when their stock of bread was reduced to just three days' supply. The British flag was run up over Malta on 5th September 1800.

In 1940, Mussolini launched Operation Hercules - a planned invasion and occupation of the Maltese Islands. Churchill was adamant about Malta's strategic importance; the island, he insisted, must be held, whatever the cost. And the strength of Malta's strategic position was not lost on the German forces, either. As the Allies made advances in North Africa, and Italy suffered setbacks with her disastrous venture into Greece, so Hitler turned his attention to the Mediterranean arena. He planned to cut the supply lifeline and starve the Maltese Islands into submission. He also subjected Malta to the most severe aerial bombardment in its history. In March and April 1942, twice as many tons of bombs rained down on Malta as in a whole year at the height of London's Blitz. There were 154 days of continuous day and night raids (London had 57), and 6,700 tons of bombs were dropped on the Grand Harbour area (by comparison, the worst night of destruction in Coventry was achieved with 260 tons). During this time, in recognition of their inhabitants' heroism, King George VI awarded the islands the George Cross.

British ships struggled to get supplies to the island amidst fierce attack from German planes, but a convoy managed to make it through the aerial fire and replenished Malta's supplies just two weeks before she would have had to surrender. Strengthened at last, Malta was afforded some respite as the Axis powers defended their retreat in Africa. The Maltese Islands became the Allied springboard for the invasion of Sicily - and for the subsequent push into mainland Europe. The Italian fleet surrendered on 8th September 1943 - by coincidence, the anniversary of the victory over the Turks in the Great Siege of 1565. 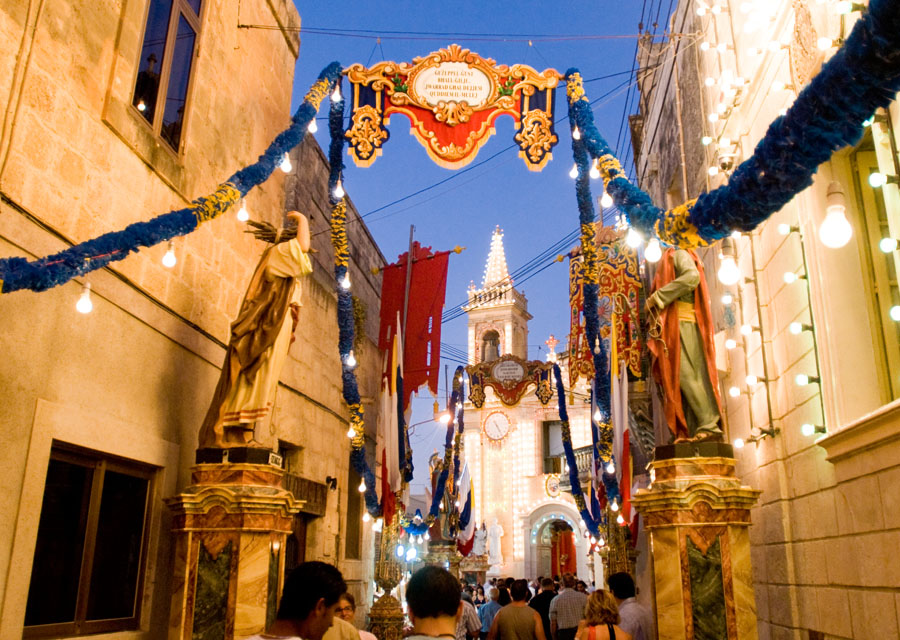 The date is also an opportunity for the Maltese people to celebrate the Nativity of Mary and is referred to as il-Bambina (Baby Mary). Malta is a predominantly Catholic country and the Church plays a key role in Maltese life, making its views known on all key issues. The annual parish festa is still the most important event in the calendar, but church attendance, although still proportionately among the highest in Europe, is declining.

Churches are splendidly dressed for the occasion with red damask hangings, the altar garlanded with flowers and the best silverware on display. Outside, the church will be brilliantly illuminated by hundreds of light bulbs. The streets are also decorated, and vendors sell all sorts of fast foods, from pastizzi (Maltese savoury pastries filled with ricotta cheese) to hot dogs and chips. Accompanied by a brass band, a statue of the Virgin Mary or of the village patron saint is paraded through the streets. The day often ends with a superb firework display, usually to music.

To discover more about Malta, click here, or buy one of our Malta travel guides.