Where to see kangaroos in Australia

Having been a separate landmass long enough for evolution to have taken a different path to all the other continents, Australia is home to plants and animals found nowhere else on Earth. The most iconic and widely recognised of them all is the kangaroo. 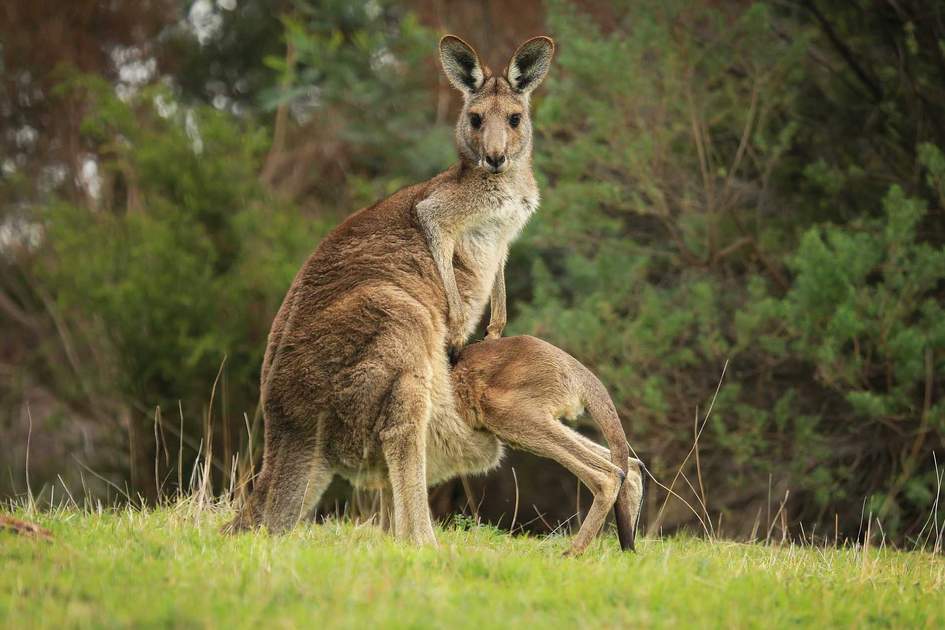 Kangaroos are not often spotted on city streets in Australia. In fact, overall they’re not seen as commonly as many people might think. In small towns and outposts the bush is frequently just beyond the backyard. This proximity to nature means it’s likely that travellers will encounter a variety of wildlife. But to have the best chance of seeing the much-loved, herbivores bounding past on their powerful hind legs, you need to head out of the city to open grassland. Here is our guide to the best places to see kangaroos in Australia.

South of Sydney on the New South Wales coast, Murramarang National Park lies along an expansive stretch of dramatic shoreline encompassing cliffs, rocky headlands and stunning sandy beaches backed by forest. The park is home to abundant wildlife. Troops of eastern grey kangaroos pass the time napping near the campgrounds and golden sands at Pebbly Beach until dusk when they congregate to graze. At nearby Pretty Beach, kangaroos are often seen near the bush hiking trails and cabins that are available to rent. Many are tame enough to come quite close to people, so you can watch them from the front porch hopping around on the grass.

Situated northeast of the town of Wentworth in New South Wales, Mungo National Park comprises most of a dry lake bed in the dried up Willandra Lakes system. An important aboriginal site, the area contains records of Aboriginal life dating back 40,000 years. Known for its otherworldly geological phenomenon, the Walls of China, a 30-m high white sand wall that is 30km long, the park supports a thriving kangaroo population. For close-up views, the best time is from late afternoon onwards when the kangaroos gather to feed in the grasslands or rest in shaded woodland areas. Red kangaroos are the most commonly found species in Mungo, and are identifiable by their earthy, reddish fur and size – males can reach a height of up to two metres. 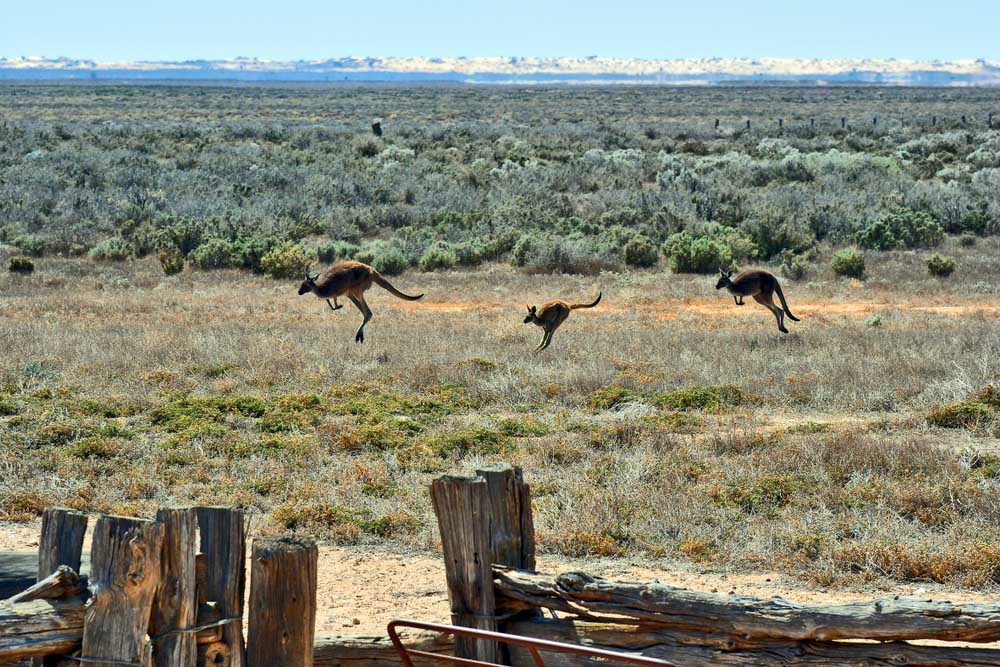 A wildlife paradise to the southwest of Adelaide, you can reach Kangaroo Island on the car ferry that regularly departs from the mainland. Blessed with some of Australia’s finest beaches at Stokes Bay and Emu Bay, the island also has striking rock formations sculpted by the elements, and Flinders Chase National Park which is the best place to experience its diverse wildlife. There are New Zealand fur seals at Cape du Couedic and hiking trails through varied landscapes where you can see wallabees, echidnas and kangaroos. Smaller than their mainland relatives, kangaroos on the island have darker, longer fur. Head to the park’s Black Swamp where they often rest amongst shaded vegetation by day, usually emerging to graze in the late afternoon, and again in the early morning.

On the southern coast of Western Australia to the east of the town of Esperance, Cape le Grand National Park covers an expansive area encompassing rolling heathland, craggy peaks and unspoilt shoreline with pristine white sandy beaches. The park’s heathlands support diverse vegetation including a variety of wildflowers, and are home to mammals including pygmy possums and western grey kangaroos. Active from dusk until dawn, it is not unusual to see the kangaroos hopping about in the vicinity of the campground at Lucky Bay, bounding down the sandy beach or sunbathing on the sands overlooking the turquoise waters. 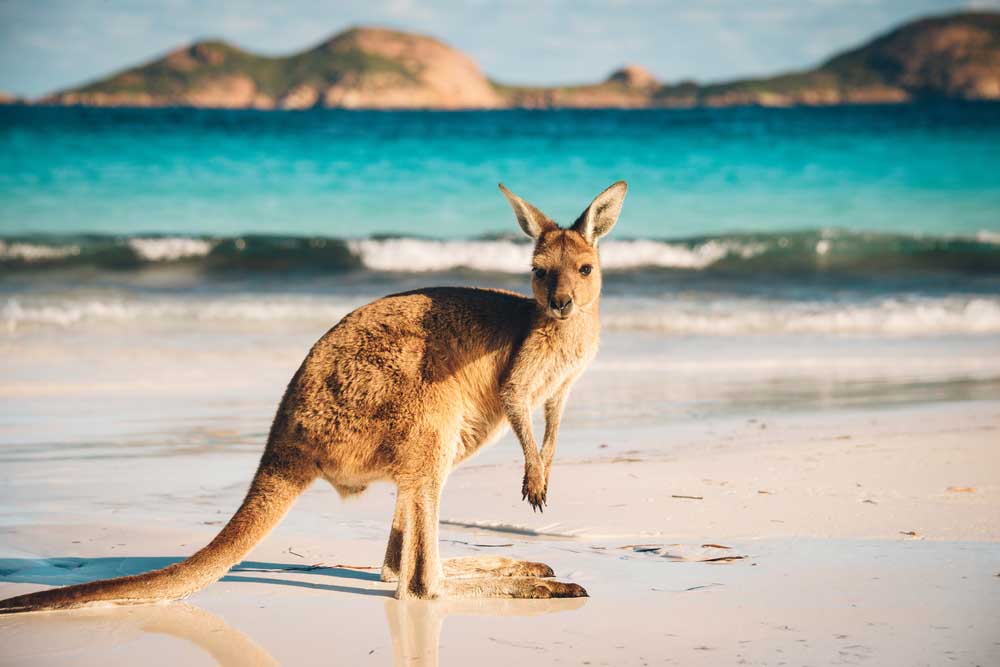 Less than an hour’s drive north of Perth on the west coast of Australia, Yanchep National Park is notable for its numerous caves and abundant wildlife. Visitors can walk on the park’s trails, ranging from 500 metres to 46km long, to experience its unique coastal plain biodiversity. The koala boardwalk gives you the chance to get up close and personal to another of Australia’s favourite creatures, while the open grassy expanses of the park are frequented by an abundance of western grey kangaroos early and late in the day. At other times you might be able to spot them dozing in shaded areas out of the sunshine.

Ready to see kangaroos in Australia?

Our local experts can help organise wonderful trips to Australia for you. Simply get in touch with us to share your ideas for the trip and let us know when you would like to travel. We will then create an itinerary especially for you, which can be amended until you're totally happy with every detail before booking.

It was the best 8 days of our life. Our expert organised an unbelievable itinerary and lodges for us and was always prompt in responding to our questions. Our safari driver was excellent. We don't have a bad word to say.