Andalucía is best-known for the sun, sea and sand of the beaches along its playground coastline. And there really is a beach here to suit everyone. Use our guide to spots off the beaten path where you can soak up the sunshine on the best hidden beaches in Andalucia. 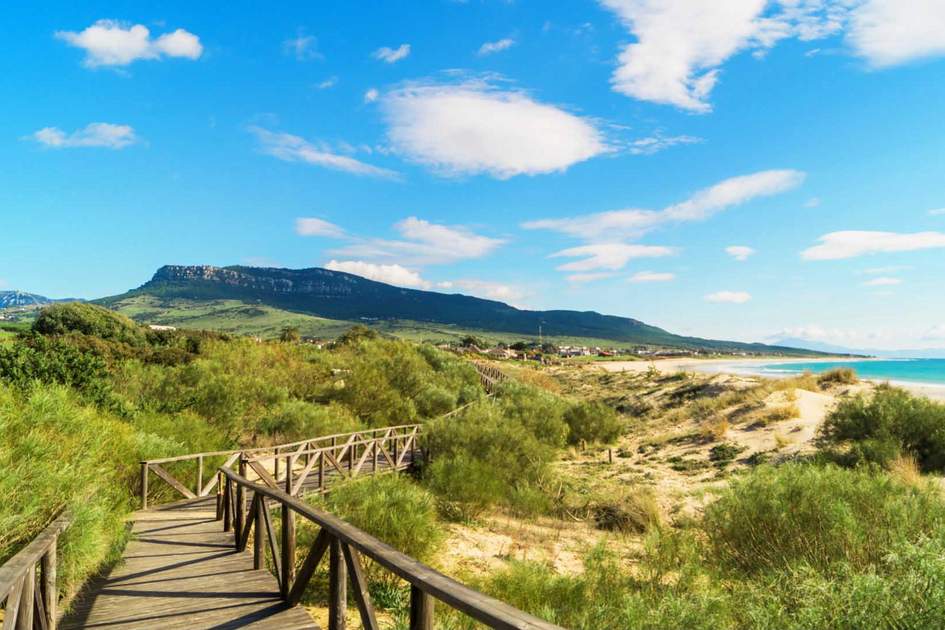 For many vacationers, Andalucía is synonymous with the Costa del Sol. The ultimate Spanish coast encompassing a 180km- (110-mile) long stretch of marinas, golf clubs and white-painted urbanizations. From the windswept Atlantic coast to hidden coves in Almería province, Andalucía is home to a host of secluded beaches just waiting to be explored.

South of Seville, in Andalucía’s south-western corner lies the province of Cádiz. Its coast is known as the Costa de la Luz – the Coast of Light – for the radiant sunshine that reflects off the glittering ocean and the golden sands of its shores. Strong ocean winds have saved the beaches here from overdevelopment. North of Tarifa – Spain’s surfing capital – a stunning coastline unfolds. Charmingly rustic and unspoiled, Bolonia is protected from the wind by headlands and the sea is calm. As well as offering one of the best beaches in Andalucía, the village is home to the substantial Roman ruins of Baelo Claudia, featuring the remains of temples and an amphitheater.

Explore the Costa de la Luz using Seville as a base on Insight Guides’ Cultural Cities of Spain trip.

Los Caños de Meca, tucked under pine-clad hills, was once a hippie resort. An uninhibited mood encourages discreet naturists, who swim for the smaller southern bay. A few hotels and restaurants are scattered along a ridge of sandstone cliffs, with hidden caves and two stunning golden beaches nestled beneath. The spot is captivating at sunset, when the sun sinks into the ocean behind the nearby cape – Cabo Trafalgar.

Along the same coast, Zahara de los Atunes is a laid-back fishing village, popular with local families. Zahara’s straight, broad beach is somewhat exposed and weather-beaten, making inroads into the friendly town, where you can try tapas in several relaxed bars. A few kilometers past nearby Atlanterra, the road ends at Punta Camarinal. Tackle the overgrown footpaths hidden from the road to be rewarded by your arrival at a powdery white sandy cove. 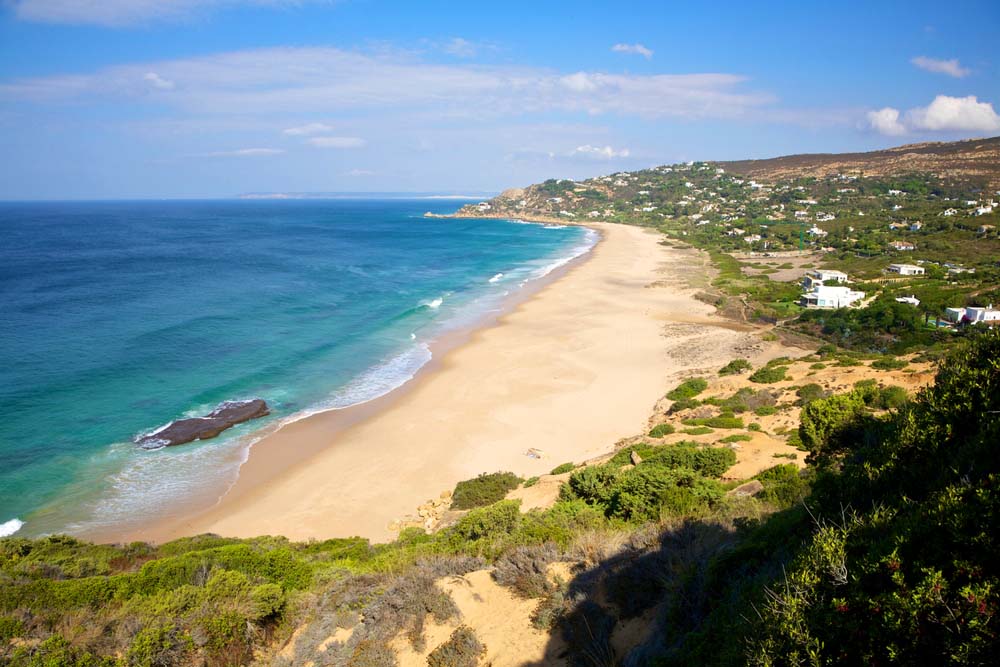 About 20km (12 miles) from Huelva, Punta Umbría is a long Blue Flag beach with clear waters and excellent facilities. Popular with wind- and kite-surfers, it attracts mainly local visitors, although foreign travelers are starting to discover its sandy shores. A spectacular unspoiled beach runs past nearby El Portil, hidden behind dense pines and tufted dunes. The shore looks out onto a flat sandy spit that has accumulated at the mouth of the Río Piedras. Where the river meets the ocean, fresh water attracts fishermen, and a blustery wind trap makes it a popular kite-surfing spot.

Some of the Costa del Sol’s fishing villages and unaltered sandy bays remain along its coast, dotted in-between holiday resorts. Cala del Pino beach, near Nerja, is one of them. Protected from the wind, this is one of the Costa’s more sparsely populated bays and one of the best beaches in Andalucía. The waters are clear, making it a great spot for snorkeling and diving. 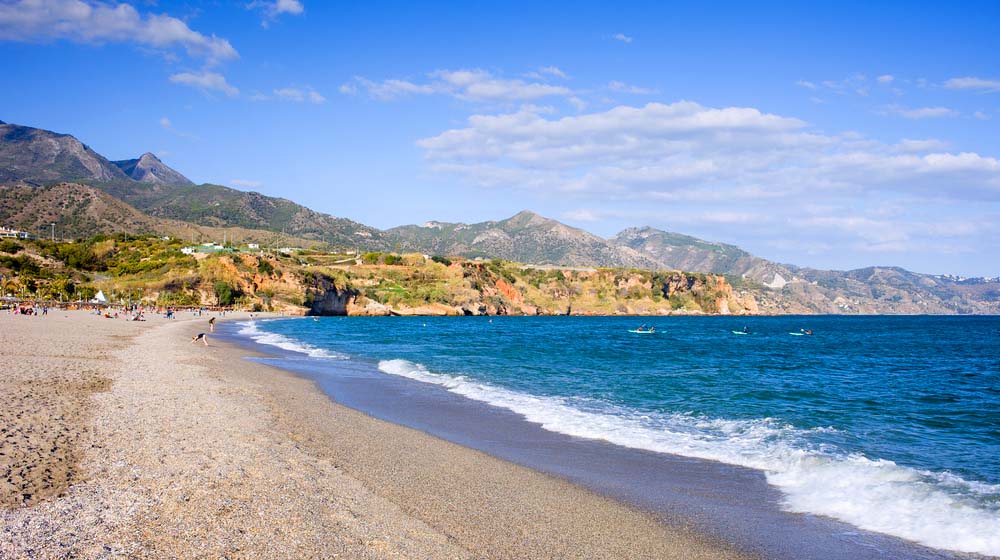 Several other beaches are worth visiting around Nerja. The main resort on the eastern side of the Costa del Sol, Nerja has seen spectacular growth in recent years, but it remains an attractive town. Backed by the Sierra de Tejeda, there is a series of pretty, sandy coves nearby. Beaches to look out for include Cala del Cañuelo, Las Alberquillas and Molino de Papel.

The most attractive stretch of Spain’s southern coast is the Costa Tropical. Locally grown mangoes, avocados and bananas flourish in the microclimate here, and stock the shelves of the local supermarkets. Near Calahonda, La Rijana is a beautiful spot, with dark sands and clear azure waters. It is fairly remote – adding to the appeal – but with no facilities, so be sure to pack a picnic. 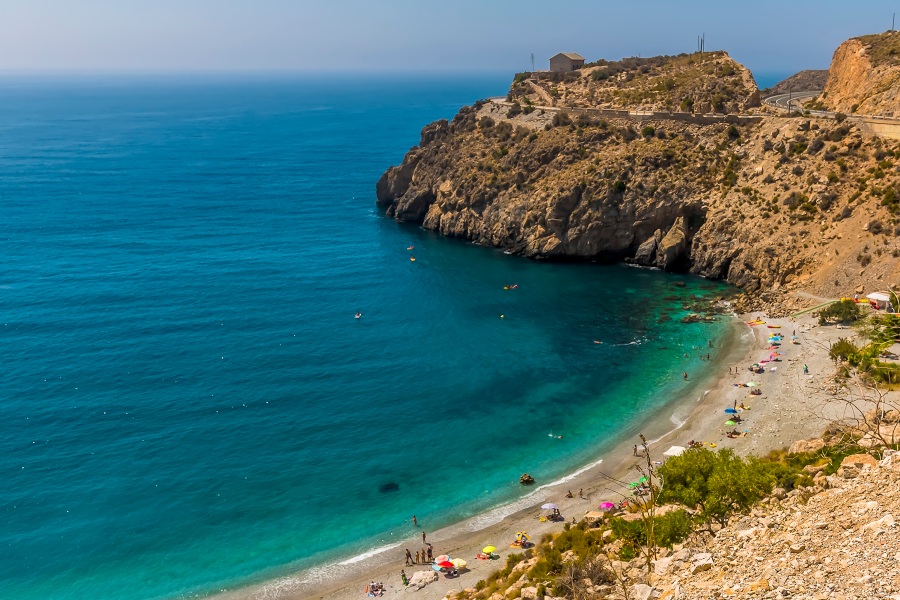 La Herradura is a small resort with an attractive beach stretched between two headlands, Cerro Gordo and the Punta de la Mona. The latter is marked by a lighthouse, and beneath it is a beautiful cove beside the pleasure boat harbor of Marina del Este. La Herradura is well-known for its water sports, especially diving and windsurfing.

Almería province is Mediterranean Spain in the raw, a dry land ruled by the sun. It is a region of stark desert landscapes of undeniable grandeur. Low rainfall and the consequent shortage of water has saved much of the east coast from over development. Agua Amarga is a tiny seaside settlement that has preserved much of its charm. Its sandy beach is squeezed between two headlands. San José, to the south, is larger and more developed, but still in keeping with its surroundings.

Take in the area by road, as part of Insight Guides’ Andalucía by Car trip and extend it to the Almería region. 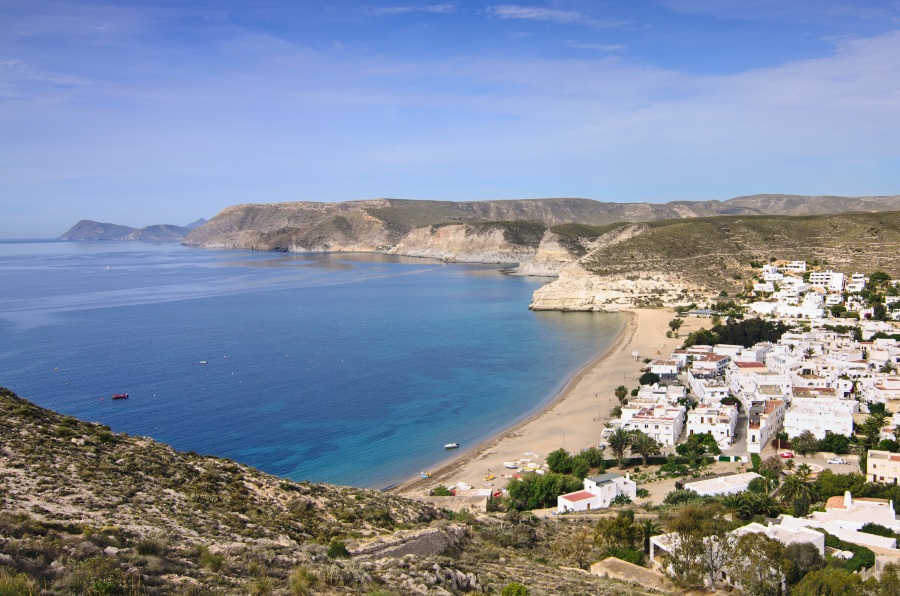 The Cabo de Gata proper, one of the Iberian Peninsula’s few volcanic landscapes, is best approached from San José. Brown road signs should direct you to Genoveses and Monsul. An easily passable dirt track leads to these two beautiful beaches on which development is prohibited. Genoveses is a curve of sand between two headlands. The next beach, Monsul, provided the setting for a scene in the movie, Indiana Jones and the Last Crusade.

Insight Guides can help you plan and book fantastic trips in Andalucía and other regions in Spain. Simply get in touch with us to share your ideas for the trip and let us know when you would like to travel. Local travel experts will then create a personalized itinerary exclusive to you and your requirements, which you can amend until it's exactly how you want it before booking. Browse our existing itineraries for inspiration, and keep in mind that they can all be tailored to suit your specific requirements.