12 months, 12 wildlife experiences: what to see and when

Whether you're looking to track down tigers in India or spot polar bears in the Arctic, here's where to travel and when for the ultimate wildlife-watching adventure 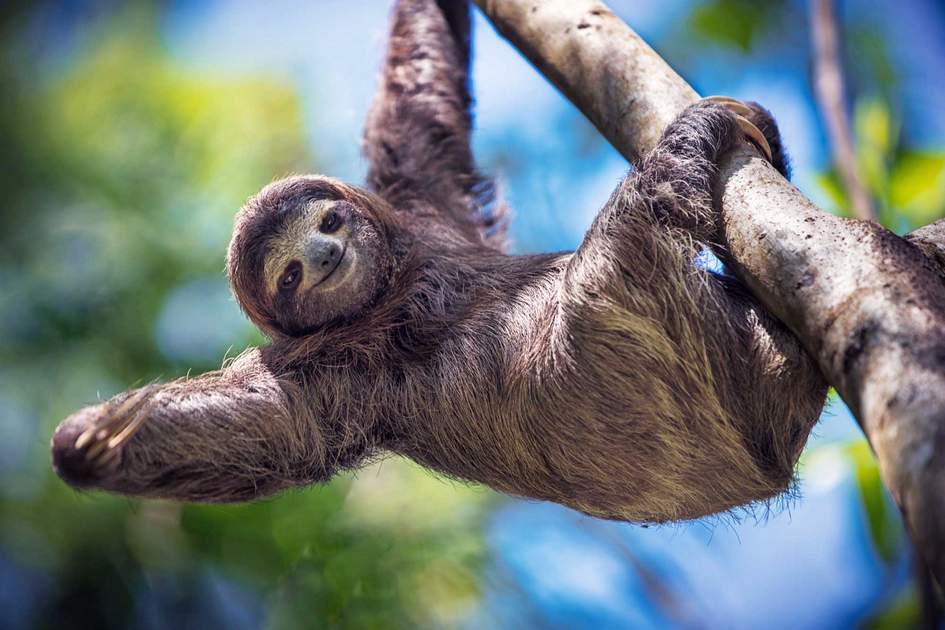 A Costa Rican sloth is one of our must-see species. Photo: Shutterstock

Wildlife-watching, visiting national parks and joining conservation projects are fast-becoming unmissable activities while on holiday. However, depending on the destination's seasons, there can be a prime time to travel. Here's where to go and when to spot the world's best wildlife

January: dolphins in the Maldives

January marks the beginning of the dry season in the Maldives; less rain and low humidity mean water visibility exceeds 25-metres and ocean temperatures stay above a balmy 28°C. Diving or snorkelling around the archipelago offers ample opportunity for dolphins to track you. The three main species found in the Maldives are the spinner, spotted and common dolphins. Spinner dolphins are dark grey around the dorsal area with lighter-coloured sides and pale underneath. Spotted dolphins are – you guessed it – spotted. They are mainly dark grey with thin stripes along each side and light shades underneath. Spots develop with maturity, leaving the immature dolphins spot-free. The common dolphin has yellow flanks with a grey patch surrounding the dorsal fin. Watch as they glide elegantly through the water, performing acrobatics or play and tease members of their pod, while snorkelling on Insight Guides' Luxury Sri Lanka and The Maldives trip.

The Andaman Sea provides deep blue waters with up-swells that create plankton blooms around Richelieu Rock and Koh Tachai, attracting increasing numbers of whale sharks to the area. Predominately lone sharks, whale sharks gather where there is an abundance of food. February is the middle of Thailand’s cool season, with low levels of humidity and temperatures averaging 28°C, making it a pleasant time to visit. Water temperatures in February are perfect for diving or snorkelling, averaging around 29°C.

Whale sharks swim past with their mouths open wide (up to five feet) filtering their food (plankton, small fish and fish eggs) from the water. Whale sharks are the largest fish and shark species, easily detected by their checkered skin and flat wide mouth. Add a boat trip to Insight Guides’ Thai Sojourn trip for a chance to swim with these gentle giants.

National parks run through the centre of India, from north to south, helping to protect the Bengal tiger and its habitat. Visit India in March for the transition between the dry and wet seasons, when temperatures start to cool but the land remains dry and dusty. The lack of grass and foliage creates less opportunity for tigers to hide and they spend a lot of time gathered at watering holes, as there is little water found elsewhere; both make tigers easier to spot at this time of year.

Corbett National Park, India’s first national park, located in the Himalayan foothills, has vast mountains dominating the scenery with the flowing Ramganga River cutting through the centre, creating the picture perfect place to spot tigers. Alternatively, visit Ranthambore National Park, the most renowned park in India, on Insight Guides' India's monuments and tigers holiday for a chance to see tigers and the palatial ruins of the Ranthambore Fort. 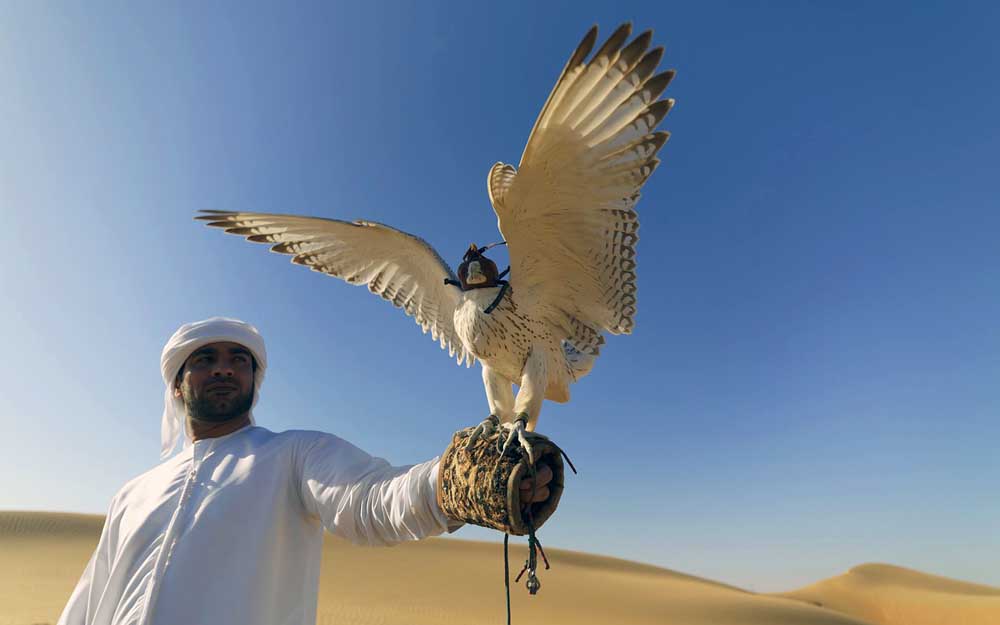 Watching falcons soar above the skies in Dubai is an ideal activity in April. Photo: Pixabay

Falconry has a long history in Dubai. The sport started as an integral part of desert life; families living on the dunes would trap a falcon as they flew over the desert on their migratory route. Once caught, time, effort, determination and skill went into training the birds who provided the family with food for the winter months. Peregrine falcons can cover miles of desert within minutes, reaching speeds of more than 100 miles per hour and homing in on prey nearly two miles away. They hunt hare and houbara (a small, rare bird around the size of a chicken).

April nears the end of the traditional hunting season by which time falcons were well trained but temperatures, although rising, were not yet hot enough for families to give up their birds. Falcons are no longer used for hunting but the tradition remains as a sport in Dubai, in an attempt to hold on to their heritage. Venture into the desert and spot falcons soaring through the sky on Insight Guides’ Arabian Family Adventure.

May: sloths in Costa Rica

Sloths can be spotted year-round in the tropical forests of Costa Rica. However, they can be hard to see through jungle foliage, lounging high up in the trees and rarely descending to ground level. Take a guided tour on Insight Guides’ Tropical Costa Rica trip and allow the experts to point out the creatures in Manuel Antonio National Park, a prime place to see both the two-toed and three-toed sloths.

May is the start of rainy season in Costa Rica when temperatures will begin to cool, rain will fall, and the jungle will be vivid shades of yellow and green and bustling with activity. Sloths become slightly more active at this time (although never too active, travelling a maximum of 40 yards per day), which can make them easier to spot. Look up to catch a glimpse of them munching on the flourishing foliage in the tree tops; leaves, twigs and buds are staples of their diet.

Isla Darwin and Wolf are the best places to see thousands of scalloped hammerhead sharks throughout June, when they migrate to the archipelago. Travel on Insight Guides’ Completely Galápagos holiday boarding a live-aboard boat (the only way to reach these remote islands) for the chance to dive with this unusual-looking species.

Grouped as coastal pelagic species, hammerheads follow continental shelves where they feed in groups throughout the day. At night they become solitary creatures. Reasons for their flat, hammer-shaped head are still unknown, with notions that it improves sensory reception, manoeuvring and prey manipulation. Warm water temperatures around the island in June (averaging 25°C) and pleasant air temperatures make this month the best for diving deep into a pool of scalloped hammerhead sharks. 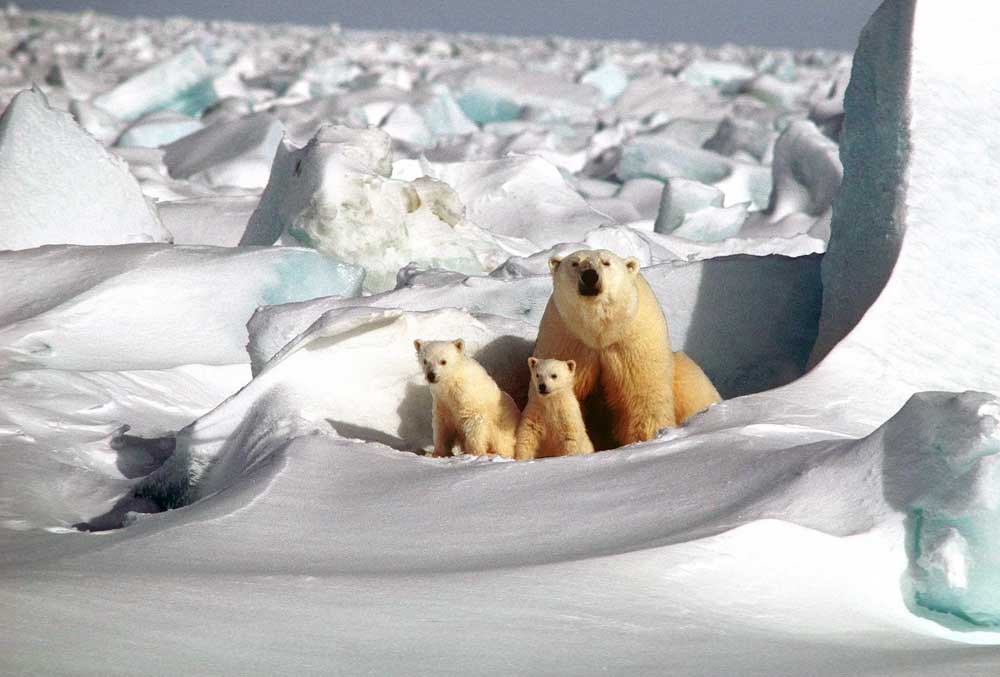 Watching polar bears in the Arctic is a unique wildlife experience. Photo: Pixabay

You might think of polar bears as winter animals but, in actual fact, the best time to spot them is in the summer, after polar seas have melted and cruise ships can navigate the Arctic waters. The summer also brings the midnight sun, extending viewing hours dramatically.

Svalbard (the world's northernmost inhabited islands, except for military bases) provides breathtaking scenery of glaciers, islands and mountains with Arctic wildlife, including polar bears, which are protected by law in Norway. For this reason, land safaris are not offered.

Polar bears are marine and land animals, hunting and catching their food from the sea. Winter is their hunting season; ice allows them to further penetrate the Arctic sea, catching and eating whales, walrus and seals, stocking up on calories before the summer comes, when they may have to go up to eight months without eating.

The big five (elephant, lion, buffalo, leopard and rhinoceros) originally earned their name for being the most dangerous and difficult animals to hunt on foot. The term now describes the five prime animals tourists want to spot on African safaris.

August is the middle of the dry season in South Africa, the bush thins giving animals fewer places to hide and they are drawn towards the last remaining areas of water. The ambient temperate is warm but not scorching, creating a pleasant atmosphere for expeditions across national parks and private game reserves. Aquila private game reserve offers a big five safari, which you can experience during Insight Guides’ South Africa: Cape Peninsula to Victoria Falls trip.

Madagascar is the only country in the world where you can spot lemurs in the wild. Endemic to the country, they rival all primate groups for the largest species diversity; from the smallest primate on Earth (the mouse lemur weighs a maximum of three ounces) to the largest of the lemur family, the indri. Living mainly in trees, lemurs survive off fruit, tree bark, foliage, and flowers. They move through the forest with their families looking for food around the hours of dawn and dusk. 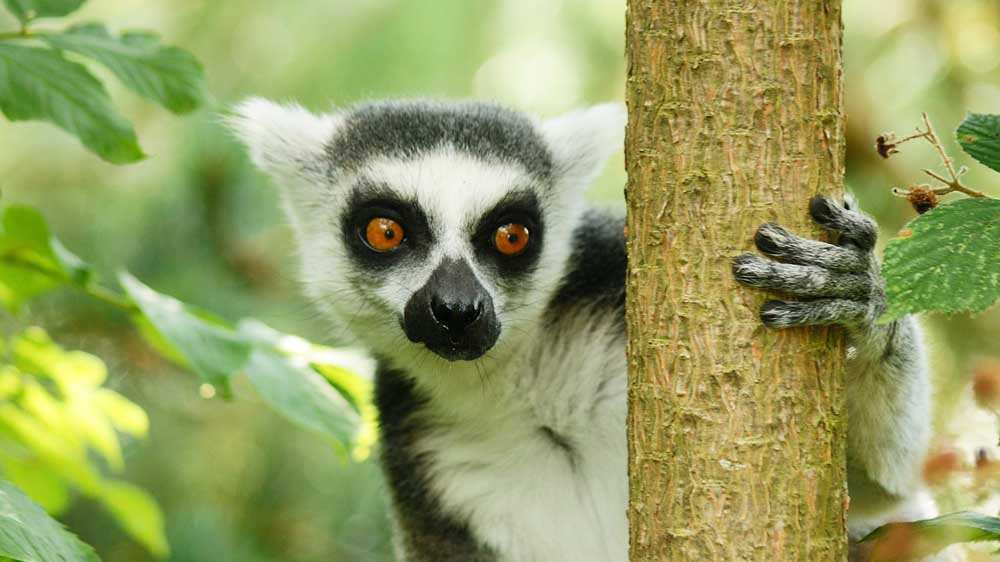 Madagascar is the only place in the world to watch lemurs in the wild. Photo: Pixabay

Atlantic salmon migrate during autumn, up-river, to spawn. Journey to Scotland in October to witness salmon battle strong currents, streams of gushing water and ascend waterfalls. Walk the six-kilometre picturesque trail running alongside the Falls of Braan watching the salmon propel themselves out of the water, pushing up-river or swimming under the water's surface throughout the deeper sections. For a less picturesque view but guaranteed salmon sightings, visit the Pitlochry Dam. A salmon ladder, 300-metres long, has been built to aid over 5,000 migrating salmon upstream to Loch Faskally and beyond.

Salmon return to their natal river, at the age of five years, to mate and lay their eggs on gravel beds, sometimes the exact ones where they were born. Salmon expend all of their energy into reproducing and completing the strenuous journey.

Pandas live in some of the most inhospitable mountainous regions of China and, with only 1,600 living in the wild, they can be difficult to find. Chengdu Research Base of Giant Panda Breeding provides a great facility to go and see pandas resting, eating, playing, drinking and nursing in a semi-natural environment. At only 500m above sea level, it is a lot lower than a panda's normal habitat, so the cooler months of winter in China make the pandas more active. In November the weather is mild; cold enough for pandas to be active but warm enough for tourists to find it pleasant to walk around the park. A panda's natural habitat is wet bamboo forests, which are replicated at the centre. They also provide rivers, lakes, brooks, caves and rocks to help stimulate the pandas and prepare them for their release into the wild. Add a trip to Chengdu to any of Insight Guides’ China itineraries by speaking to our local experts.

Whales migrate to the warm calm waters of the Indian Ocean off Sri Lanka from November to April with peak sightings in December. Sri Lanka's whale watching season is famous for the variety of whales that migrate here, including Bryde's whales, sperm whales, fin whales, the infamous blue whale and sometimes even killer whales.

Research in 2003 showed the water around Sri Lanka as being the ideal habitat for blue whales, the largest animals ever known to exist (reaching lengths of 30-metres and weighing 130 tonnes), and for having the highest density of sperm whales in the world.

Are you ready for a wildlife-watching adventure with Insight Guides?

Browse ready-made trips available online now or talk to a local expert today, to plan your holiday from scratch