6 great things to do in Dubai

Over the last 40 years, Dubai has transformed from a modest trading town into one of the most futuristic and stylish destinations on earth. As well as the world's highest building and largest shopping mall, it also has a maze of souks in its beguiling old city. Here are 6 great things to do in Dubai. 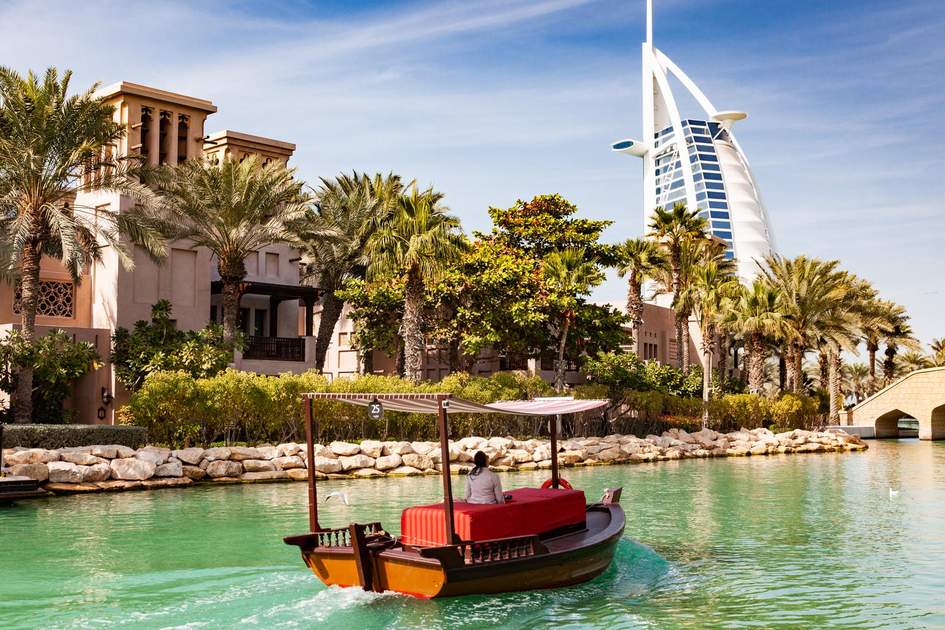 A visit to the impressive Madinat Jumeirah resort with its covered market and choice of bars and restaurants is a great thing to do in Dubai. Photo: Melinda Nagy/Shutterstock
PrevNext

1. Wander through the Gold Souk

Deira is the one of the old city’s principal districts, dating from the 19th century when settlers from Bur Dubai founded a new village north of the Creek. It soon became more commercially important than its older neighbor. Today is both more built-up and more cosmopolitan. Diera is the city’s best area to wander through, to discover its unique blend of cultures and seemingly endless array of shops.

Arguably the most famous attraction in Deira is the Gold Souk, a cluster of streets shaded by a high roof in the Al Ras neighborhood. With around 700 stores in total, Dubai Gold Souk is claimed to be the biggest in the world, and with the lowest prices, too. Haggling is expected when shopping for the huge range of intricately worked necklaces, bangles, rings, earrings and brooches on offer. A magnet for visitors throughout the year, the souk is particularly busy during the month-long Dubai Shopping Festival in January. During the event, it becomes a focal point for the festival’s raffles and street entertainment, as well as the attractive discounts offered by traders throughout the month. 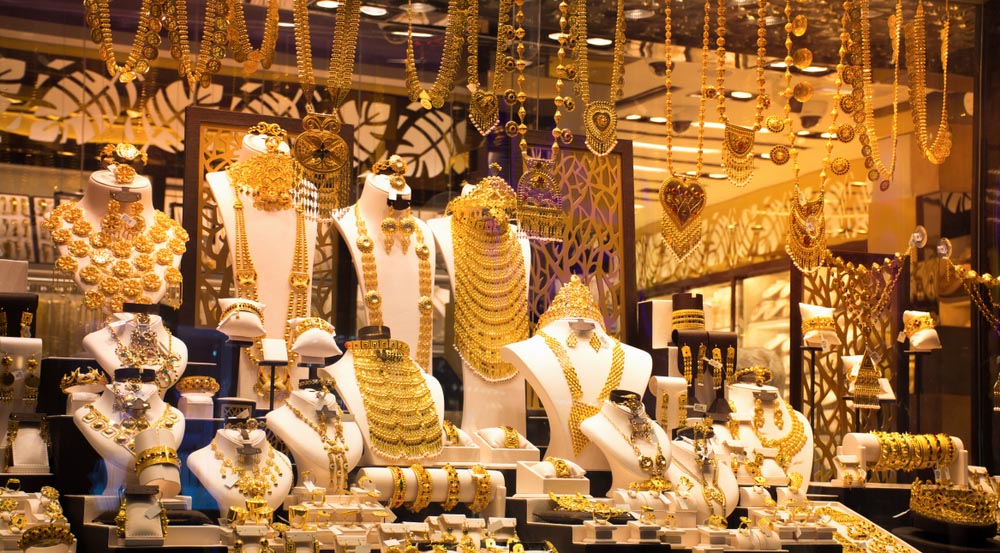 2. Marvel at the skyscrapers on Sheikh Zayed Road

The greatest concentration of landmark buildings in Dubai is on Sheikh Zayed Road, between the Trade Centre Roundabout and Interchange No 1. Formerly the most significant structure on this stretch, the white, 39 stories of the Dubai World Trade Centre building rise up 149 meters at the northern end of the strip. Once the tallest building in the Middle East, it has long since been overtaken by more glamorous structures further down the road.

Just south of the Trade Centre, the iconic Emirates Towers, completed in 2000, consist of a 355-meter-high office block and the 309-meter-high Jumeirah Emirates Towers Hotel. Head there to see its slender triangular towers, clad in silver aluminum with copper and silver reflective glass, which capture the changing light of the desert sun and show off the building's dramatic integrated illumination after dark.

North and south of the Emirates Tower along Sheikh Zayed Road, skyscrapers are lined up shoulder to shoulder, offering an eclectic compendium of architectural styles ranging from the elegantly postmodern to the positively weird. Notable landmarks include the Fairmont Hotel, inspired by the shape of a wind-tower and strikingly illuminated after dark; The Tower, covered in blue glass with Islamic styling and a distinctive pointed tip; the pencil-thin 333-meter-high Rose Rayhaan Hotel, and the iconic Dusit Thani Hotel, the distinctive outline of which resembles an upturned tuning fork. On the opposite side of the highway is the blue-and-white Chelsea Tower, with its striking square opening at the top bisected by a huge vertical spike.

West of Interchange No. 1, the staggering Burj Khalifa rises like an enormous needle out of the heart of the expansive Downtown Dubai development. Opened in early 2010, the tower stands 828 meters high making it the world’s tallest man-made structure. It also boasts a host of other superlatives including the building with the most floors (160), the highest mosque (158th floor) and the world’s highest swimming pool (76th floor).

The astonishing size of the Burj Khalifa and its distinctive tapering outline is hard to grasp close up – the whole thing is best appreciated from a distance. From afar you can properly appreciate its jaw-dropping size, and the degree to which it dwarfs the surrounding high-rises, many of which are considerable structures in their own right.

The easiest way to visit the tower is to take the expensive trip up to the misleadingly named ‘At the Top’ observation deck on floor 124, although there are actually 160 floors. Tours leave from the ticket counter in the lower-ground floor of the Dubai Mall. Tickets can be pre-booked online or pre-purchased at the ticket counter. Book well in advance as there is usually a wait of around a week to go up. 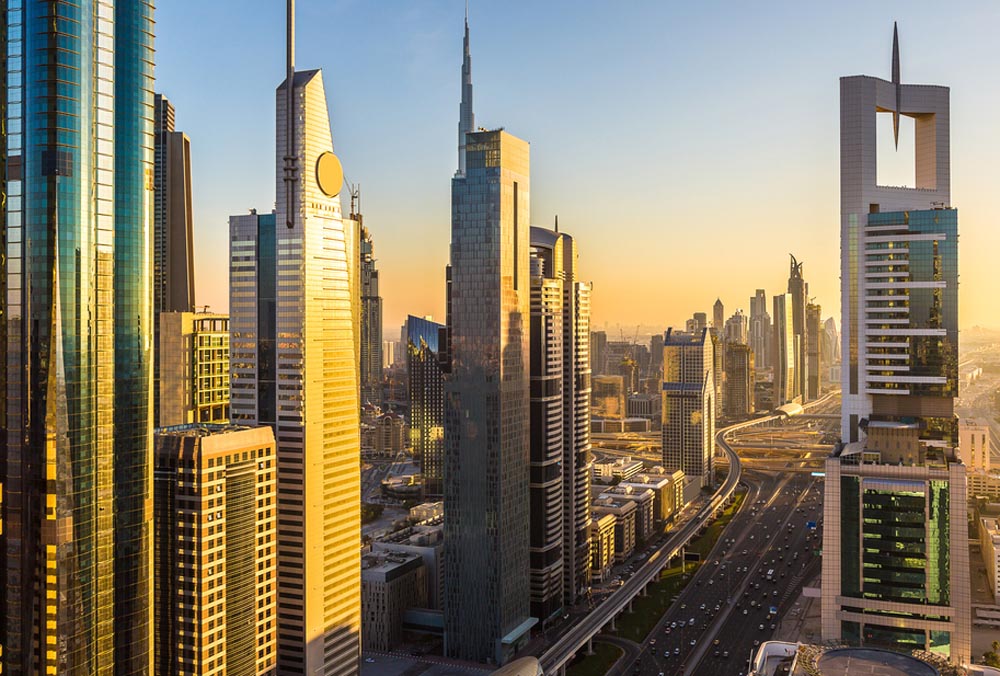 The gargantuan Dubai Mall houses more than 1,200 stores spread across its four floors. The complex is by some distance the world’s largest mall measured by total area (a million square meters). Despite its enormous scale, it is easy to navigate to flagship branches of department stores such as Galeries Lafayette and Bloomingdale’s, the Japanese bookseller Kinokuniya and London’s famous Hamley’s toy store. There is also a vast selection of upmarket designer stores, mostly clustered along ‘Fashion Avenue’, complete with its own catwalk and Armani café.

The mall is also home to the Dubai Aquarium and Underwater Zoo, which features a huge, floor-to-ceiling transparent viewing panel towering over the shops by the mall’s main entrance, filled with an array of marine life from sharks and stingrays to colorful shoals of tropical fish. Other family-friendly attractions include the KidZania mini-city and an Olympic-size ice rink.

A 25-minute drive down Sheikh Zayed Road south of the marina takes you to the outlandish, mile-long Ibn Battuta Mall. It is worth the trip out to sample what is arguably Dubai’s wackiest shopping experience. The lavishly decorated mall is themed in six different sections after some of the places – Egypt, Andalusia, Tunisia, Persia, India and China – visited by the famous Arab explorer Ibn Battuta, complete with all the architectural kitsch you would expect. Highlights include a life-size elephant and rider, a twilit Tunisian village and a full-size Chinese junk. As so often in Dubai, the concept may be tacky, but it’s carried out with such extravagance, and on such a scale, that it’s difficult to not be at least a little impressed. The walk from one end of the elongated mall to the other is one of the most pleasant strolls you can have in Dubai’s pedestrian-hating suburbs.

Despite contemporary Dubai’s obsession with modern technology, getting from one side of the Creek to the other in the city center is still a charmingly old-fashioned experience. The crossing involves a trip in one of the hundreds of small rickety boats – abras – which ferry passengers between Deira and Bur Dubai. It’s a wonderful short journey, offering superb views of the fascinating muddle of creekside buildings with their tangles of souks, wind towers, mosques and minarets. Note that small bumps and minor collisions between boats are common when docking and departing, so take care when boarding. 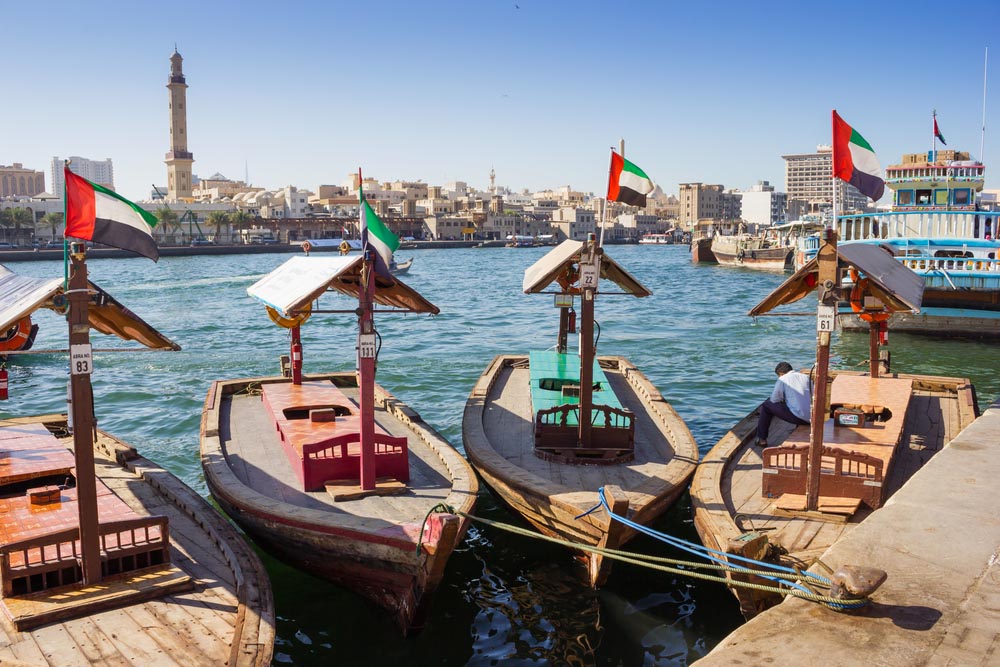 Running parallel to Sheikh Zayed Road, Dubai’s beach-fringed coastline begins just west of the old city center. The easternmost stretch of beach can be found in the upmarket but low-key suburb of Jumeirah. The major sight in the district is the stately Jumeirah Mosque, at the city end of Jumeirah Road. Built in the medieval Fatimid-style during the 1970s, the mosque has a pair of soaring minarets, a roofline embellished with delicately carved miniature domes, and richly decorated windows. And it is one of only a couple of mosques in the city that non-Muslims are allowed to enter.

The Sheikh Mohammed Centre for Cultural Understanding arranges weekly tours with entertaining and informative guides, who explain some of the basic precepts and practices of Islam before throwing the floor open for questions. When joining a tour, expect some nice Emirati breakfast options before it starts, as well as free copies of the Quran and other informational leaflets regarding Islam. There is no need to book, but you should arrive at the mosque 15 minutes before the tour starts to buy your ticket outside. 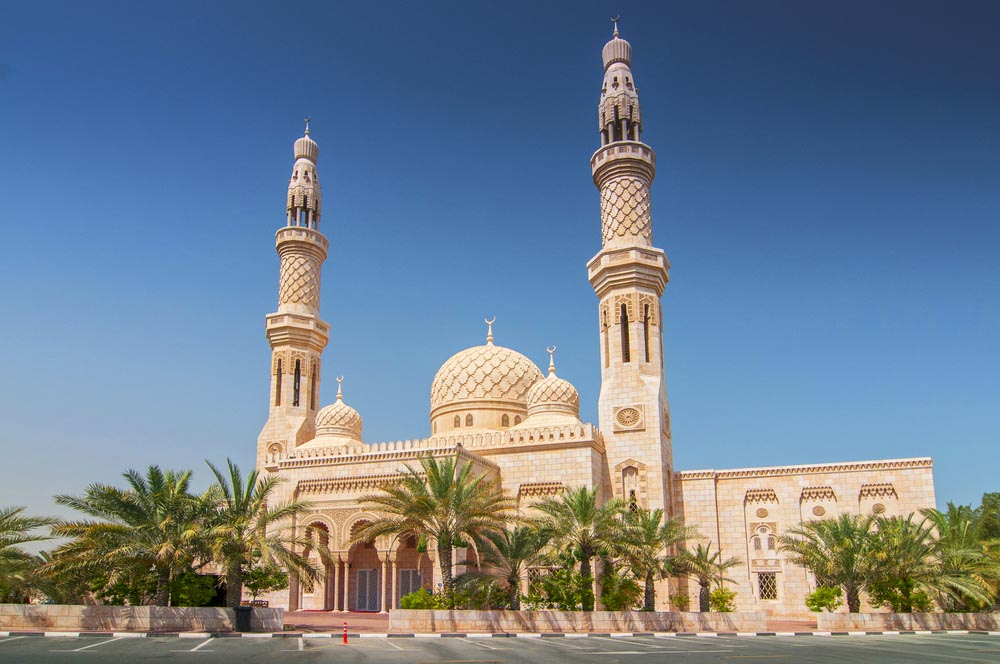 A stone’s throw south along the coast, from the iconic, towering, sail-shaped Burj Al Arab Jumeirah luxury hotel, the splendid Madinat Jumeirah resort takes its inspiration from the wind-tower houses of Al Fahidi Historical Neighborhood. However, modern construction techniques allow for taller, more impressive structures, resulting in a fabulous reinterpretation of traditional Arabian architecture. A definite ‘must see’ for any visitor, Madinat Jumeirah has two luxury hotels – Mina A’Salam and Al Qasr, both of which have breathtakingly beautiful interior decor and a number of licensed restaurants and bars with wonderful sea views, that are open to non-guests.

The resort is also home to the delightful Souk Madinat Jumeirah covered market, which despite its relatively recent construction manages to convey an authentic atmosphere. As well as various antiques shops, fashion boutiques and handicraft stalls, the souk offers a number of bars, licensed restaurants and cafés that open onto lovely terraces.

Ready to take a trip to Dubai?

Insight Guides can help you to plan and book unforgettable trips to Dubai. Simply get in touch to let us know when you would like to travel and your ideas for the trip. Local travel experts will then create a personalized itinerary especially that you can amend until you're completely happy with every detail before booking. Browse our existing itineraries for inspiration, and keep in mind that they can all be tailored to meet your own specific needs.