Insight Guides' trip planners for Sri Lanka suggest an ideal way to tour the perfectly preserved colonial town of Galle, located in the southwest of the country 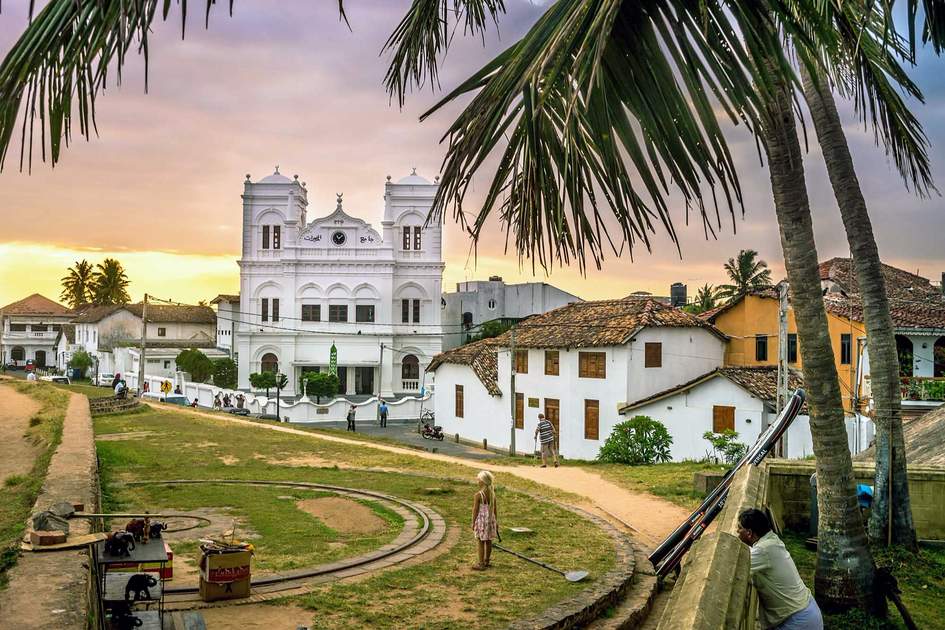 Step back in time with a morning walk around old Galle, the most perfectly preserved colonial town in Sri Lanka, before heading off for a leisurely afternoon (or longer) on the nearby beach at Unawatuna, says Insight Guides' local experts. Here's how to do it:

Distance: 3km (2 miles)
Time: A leisurely day
Start: Galle Fort
End: Unawatuna
Ideal Insight Guides' trip: Sri Lanka Culture and Coast, which includes a 2-day stop in Galle
Points to note: Galle Fort is 116km (72 miles) from Colombo and easily reached by rail or road before going on by road to Unawatuna beach. There is no shade along the ramparts of Galle Fort, so wear a hat, or copy Sri Lankans and use an umbrella as a parasol.

Entrance to Galle Fort is through the Main Gate, overlooking the cricket stadium around 250m/yds from the railway and bus stations. The gate was created by the British in 1873 by tunnelling through the embankment that links the western Star Bastion with the eastern Sun Bastion, while in 1881 they added the clock tower that looms over the central Moon Bastion. The Dutch built the walls to withstand enemy cannonballs. More than 300 years later, the fort’s walls did a sterling job of keeping the 2004 tsunami at bay. You can explore Galle Fort on a guided tour with a local expert to learn about the fort's tumultuous history on Insight Guides' Unforgettable Sri Lanka holiday.

After emerging through the gateway, follow Church Street as it curves east below the rampart wall. The long, whitewashed building on your right is the Galle National Museum, originally part of the complex built by the Dutch in 1684 to house army officers and now home to a few rather lacklustre displays on the history of the city. Immediately past here lies the superbly renovated Amangalla Hotel, the successor of the famous old New Oriental House, occupying an imposing three-storey building originally built for the Dutch governor in 1684.

On the corner of Middle Street next to Amangalla, the Groote Kerk (Great Church) dates from 1755 and is the oldest Protestant place of worship in Sri Lanka. Evidence of the town’s past is to be seen in the solid tombstones of Dutch and British residents laid out in the cemetery garden outside; the church’s detached belfry, built in 1701, stands over the road at the corner of Queen’s Street.

A little further along, on the other side of the street, is the British-era All Saints’ Church. Just beyond it is the stunning Galle Fort Hotel, created in 2005 out of an abandoned mansion of 1695, while further Dutch- and British-era colonial villas along the street have also been renovated and reopened as smart little boutiques – evidence of the increasing tide of gentrification which has swept through Galle over the past decade, and of the town’s sizeable expat European community. 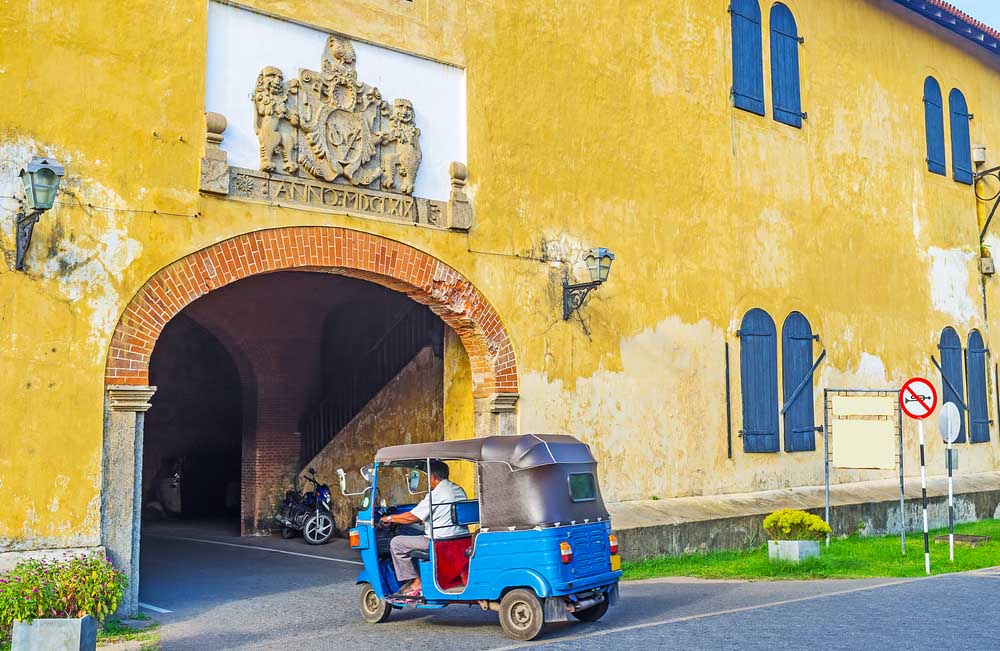 Tuk tuk is a great way to get around Galle. Photo: Shutterstock

Retrace your steps for a few yards then turn right down Queen’s Street where the Queen’s House opposite the Groote Kerk belfry boldly displays the date ANNO 1683. Diagonally opposite is the town’s modern Maritime Museum, housed in the sprawling Great Warehouse, one of Galle's biggest and most-eyeing catching colonial buildings. Built up against the end of the Great Warehouse is the fort’s Old Gate, which has the novelty of two competing crests: a VOC Dutch crest (dated ANNOMDCLXIX) above the gate on the inside of the fort, and a British coat of arms, added at a later date, on the gate’s exterior face.

Walk back through the gate into the fort and skirt round to the eastern corner of Court Square, where the date 1759 etched into a white wall identifies the Aker Sloot. Still a government residence, the breadfruit tree above its high walls was introduced by the Dutch – the first of its kind on the island. South of here, along Hospital Street, the long white building on the sea-facing side of the street is the old Dutch Hospital.

A block inland, on Leyn Baan Street, is the quirky Historical Mansion Museum, comprising several rooms of random bric-a-brac collected by its owner over the past 40+ years. Local artisans including lace-makers and gem-cutters can also often been seen at work on the premises. Serendipity Arts Café is a good option if you are in need of refreshment, or turn down Pedlar Street to try Pedlar’s Inn Café (see below).

South of here, Leyn Baan Street continues to the seafront ramparts and the 18m (59ft) lighthouse at the Point Utrecht Bastion, built in 1940 to replace the old British lighthouse that burnt down in 1936. Although you can’t climb it, you can step up to the top of the rampart wall and walk along the grass embankment. On the landside is the white, Baroque-looking Meeran Jumma Mosque.

From here, you can walk along the embankment parallel to Rampart Street with the sea on one side and the red-tiled rooftops of the tiny houses crammed into the fort on the other. Steps lead down to pockets of beach where families splash in the sea. After the Aeolus Bastion, the ramparts broaden and provide a breezy walk past the Star Bastion to the clock tower and back to the Main Gate.

A ride by three-wheeler taxi for 5km (3 miles) east along the south coast will bring you to Unawatuna beach for lunch and a swim to end the day’s outing. The village of Unawatuna is spread out around a picture-perfect bay. Formerly the most popular beachside hangout in Sri Lanka and a long-established backpacker favourite, the village is now beginning to suffer from years of overdevelopment – and from the increasingly huge crowds of tourists who descend on the place – but remains a pleasant spot to while away a day or two, with an excellent selection of guesthouses and cafés, pleasantly laid-back by day, and with a distinct party atmosphere after dark, as the beachfront bars fire up into life. There’s also reasonable swimming plus a bit of snorkelling and surfing (although not as good as at other places around the island, such as nearby Hikkaduwa). You can soak up the sun on the island's best beaches on Insight Guides' Sri Lanka: Culture and Coast trip. 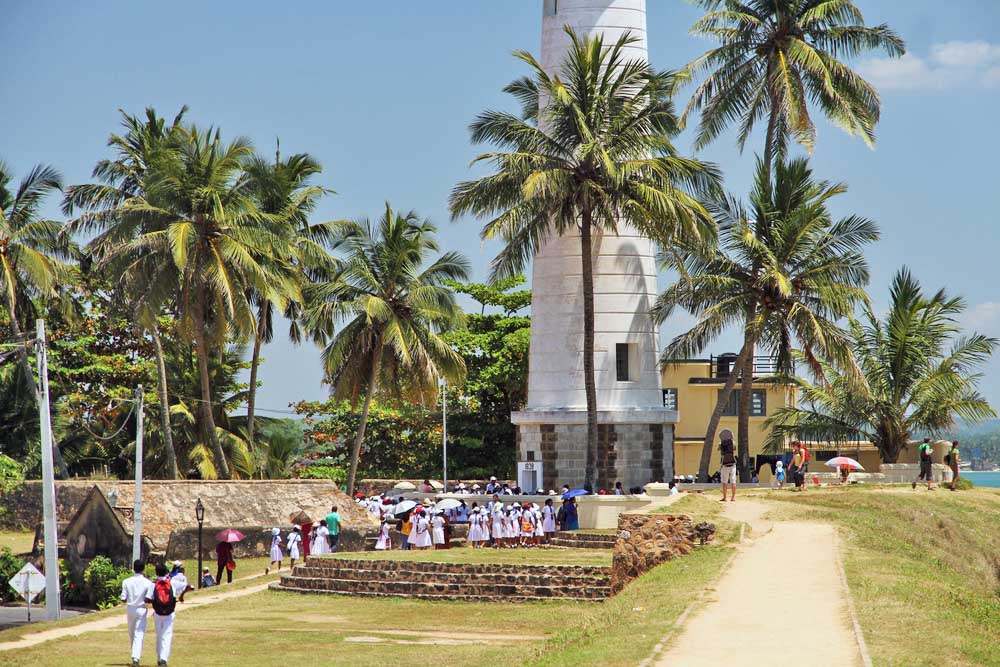 Walking to the Galle Fort Lighthouse is a must on your day tour. Photo: Shutterstock

Where to eat and drink on your day in Galle

Popular and funky little café serving up all sorts of breakfasts, plus sandwiches, wraps, cakes and a short selection of international mains with a mostly Asian twist.

Small informal café with delicious snacks, juices, coffee and tea served on a verandah. Brilliant spot for a break while watching the life of Galle Fort pass by.

Are you ready to explore Galle Fort and Sri Lanka with Insight Guides?

Despite our late arrival, we were met at the airport and taken to our hotel. We had a car and driver/guide whose English was good. Sometimes he would suggest other things to see, not on the itinerary. This was great as many days had a lot of free time... Read more