Sri Lanka's terrain is wild and varied: from the rugged Knuckles Mountain Range, to traditional tea plantations, idyllic beaches and colonial towns. So, where should you begin tracking down the best views on your trip to Sri Lanka? By adding these top five unmissable views to your itinerary of course... 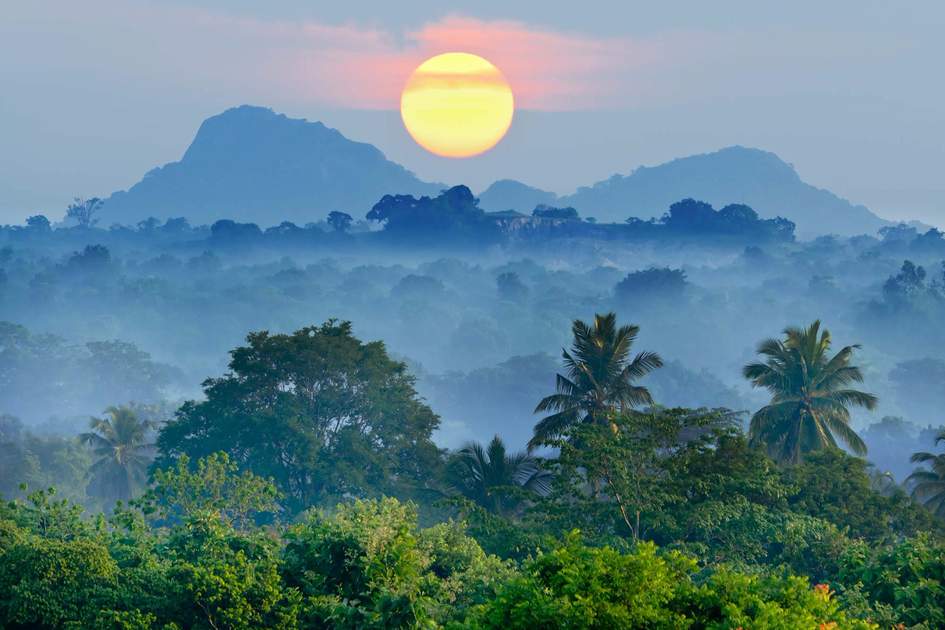 Sunrise in the jungles of Sri Lanka. Photo: Shutterstock
PrevNext

A marvellous landscape of bleak upland plains dotted with beautiful stands of cloud-forest, bounded by stunning cliffs, waterfalls and the viewpoint at World’s End.

At the southern edge of the hill country, lies Horton Plains National Park, a bleak, windswept plateau located at an altitude of around 2,000 metres (6,500ft). This is the one national park in Sri Lanka where the scenery, rather than the wildlife, is the principal attraction: a forbidding and misty landscape, often enveloped in dense cloud and rain, punctuated by rare stands of tangled cloud-forest and bounded on its western and northern sides by Sri Lanka’s second- and third-highest mountains, Totapola and Kirgalpotta. The best time to visit is in the early morning, 6–10am.

The park offers some excellent hikes, the most popular being the 9km (5.5-mile) round trip to World’s End (below), a stunning viewpoint at the very edge of the hill country, where the cliffs suddenly fall away beneath one’s feet for the best part of a kilometre (half a mile) to the plains below. The return path takes one via Baker’s Falls, a picturesque little cascade whose cool waters offer a perfect spot to bathe tired feet.

A trip to Horton Plains National Park can be added to your trip itinerary with Insight Guides: submit a trip request today.

A fabulous perch just outside Haputale, and a favourite haunt of great tea magnate Thomas Lipton, after whom it’s named.

East of Haputale, stretch the beautiful tea gardens belonging to the picturesque Dambatenne tea factory, which is also open to visitors, and a good place to see a working tea factory in full flight. From the factory, small country lanes lead up through the tea gardens to the superb viewpoint known as Lipton’s Seat (below), named in honour of the Victorian tea magnate whose name remains synonymous with tea across South Asia, and who is said to have often ridden his horse up here to enjoy the view. Add a visit to both stops on Insight Guides' Sri Lanka Deluxe holiday.

An idyllic little village with gorgeous hill country scenery and one of the island’s best viewpoints through the dramatic Ella Gap.

Half an hour’s drive northeast of Bandarawela, at the southeastern cusp of the hills, the idyllic little village of Ella is one of the most pleasant spots in the region, with a halcyon atmosphere approaching that of an English country hamlet – although rampant development is now beginning to slightly overwhelm its modest charms. The village’s biggest attraction is the drop-dead gorgeous view through the narrow cleft in the hills – the so-called Ella Gap – down to the hills below, one of the finest views on an island that is full of unforgettable panoramas. Discover it for yourself on Insight Guides' Unforgettable Sri Lanka trip.

A rugged and little-visited uplands east of Kandy – Sri Lanka at its wildest and least developed.

East of Kandy, the vista is dominated by the Knuckles Range, named by the militaristic British for its five peaks’ alleged resemblance to the knuckles of a clenched fist – whereas the Sinhalese refer to the range by the rather more poetic name of Dumbara Kanduvetiya, or “Misty Mountains”. Explore the range and hike through the wilds with Insight Guides on our Perfectly Sri Lanka tour.

The hills here are some of the wildest and least spoilt in Sri Lanka, with huge, though still largely unexplored, trekking and wildlife-spotting possibilities. It was this ruggedness and remoteness that led the people of Kandy, on the numerous occasions when they were threatened by invaders, to leave the city and trek out to the citadel of Hunnasgiriya and camp there until the danger had passed, taking the royal treasures, including the Tooth Relic, with them.

The dramatic summit of Adam’s Peak towers over the southern hill country – and doubles as one of the island’s most important pilgrimage sites.

Although only the fifth-highest mountain on the island, at 2,243 metres (7,360ft), Adam’s Peak is easily the most dramatic, rising in solitary splendour above the surrounding hills.The peak has been an object of worship and pilgrimage for centuries amongst the Sinhalese, thanks to a strange impression on the bare rock at its summit that is popularly claimed to be a footprint (Sri Pada) made by the Buddha himself during one of his three legendary visits to the island.

Thousands of pilgrims haul themselves up thousands of steps to the mountain’s summit every year to pay their devotions to the footprint. The arduous climb up the mountain from Dalhousie is traditionally made by night during the pilgrimage season from January to April. Arriving in time for dawn, one has the best chance, weather permitting, of seeing the extraordinary sunrise and the associated spectacle known as the “Shadow of the Peak”, whereby the rising sun casts a perfectly triangular shadow of the peak’s summit, which hangs miraculously suspended in mid-air for 20 minutes or so. This bizarre phenomenon has yet to be satisfactorily explained, but is commonly taken by visiting Buddhists as proof of the mountain’s extraordinary supernatural qualities.

Add a summit of Adam's Peak to your holiday with Insight Guides: our local experts will create and organise your trip from start to finish. Submit an enquiry online now: simply tell us where you'd like to travel and what you want to do there.

This blog was originally published on September 13, 2016.

Where to stay: 10 best boutique hotels in Sri Lanka

Sri Lanka shopping guide: What to buy in Sri Lanka and where

What not to miss on your holiday: 11 essential Sri Lanka experiences

Advice from our local expert and trip planner: How to get off the beaten path in Sri Lanka