Celebrating Carnival in the Caribbean 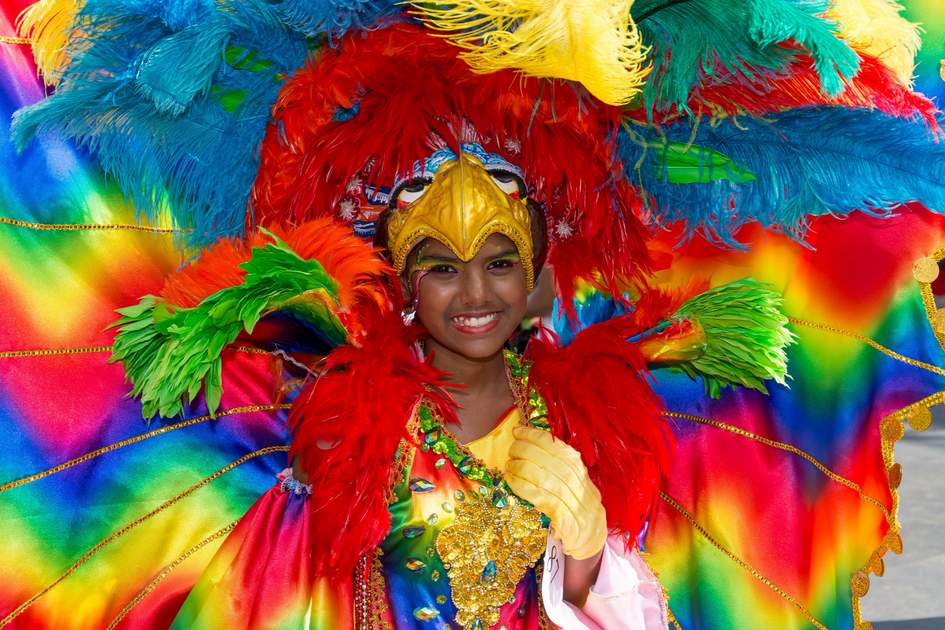 Every February, thousands of Trinidadians and visitors come together in a sea of colors, feathers, rhythm, and rum. From J'Ouvert, the wild street party that takes place from dawn on the Monday before Ash Wednesday until King Momo’s death by fire in the last hours of Shrove Tuesday, Port of Spain is one big anarchic Carnival party. The heroes are soca stars and ingenious costume designers highly revered by a hip-swinging crowd dizzy with the rhythm of steel pans.

This is Caribbean Carnival.

Trinidad hosts the biggest Caribbean Carnival, which originated out of the Christian tradition of having a last big feast before fasting during Lent. In Guadeloupe and Martinique, people dress in black and white on Ash Wednesday and bury King Vaval. On St-Barthélemy, King Moui-Moui is burned. On Saint Kitts, Christmas and the New Year are the best times to enjoy parades and street festivals. Other so-called Carnivals in the summer months have developed from the harvest festivals after the sugar cane had been cut. This includes the Crop Over in Barbados, which includes the ceremonial delivery of the last canes. Some islands have only recently established Carnivals for tourism’s sake – any excuse for an extended street party…

As soon as one Carnival ends, the designers’ imaginations are hard at work on the next one. Great Carnival designers such as Trinidadian Peter Minshall – whose renowned costumes led him to design the costumes for the opening of the Olympic Games in 1992 and 1996 – set up Mas Camps (workshops) where vast numbers of costumes are made on a theme for their bands. Each band has a Carnival King and Queen who wear the masterpieces, which are judged on Dimanche Gras, the night before Carnival officially begins.

The Mas tradition started in the late 18th century with French plantation owners organizing masquerades (mas) and balls before enduring the fasting of Lent. Slaves copied and lampooned their masters; and once set free from forced labor, their frustra­tions found a platform in clever calypso lyrics mocking their former masters, and then their political leaders. Calypsonians can trace their origins back to the late 18th century and the first “shantwell,” Gros Jean. With African, French, British, Spanish, and East Indian influences, it has developed into today’s keenly fought competition for the Calypso Monarch’s crown.

January–February/March
The best carnival in the world is a fully participatory affair with a rich history, 100,000 costumed revellers, unremitting soca, calypso, and steel pan music, and a season-long lead-up of events for every taste and age group.

January–February/March
With a month-long festival culminating in the main event, this is a friendly and often wild party featuring the region’s best tumba and tambu music performers.

August
Traditionally celebrating the final sugar harvest, this festival is one of the region’s most exuberant, with calypso, soca music, elaborate street parades, and dancing.

December–January
A smaller but still exciting carnival, engulfing both islands in calypso performances, partying, and a fantastic “j’ouvert” event on Boxing Day.

Book a trip: If the Caribbean piques your interest, chances are you'll like our Costa Rican Eco Adventure.