From the jagged peaks of Torres del Paine to the impressive lagoons of Nevado Tres Cruces, Chile is home to some of the best and most impressive national parks in the world 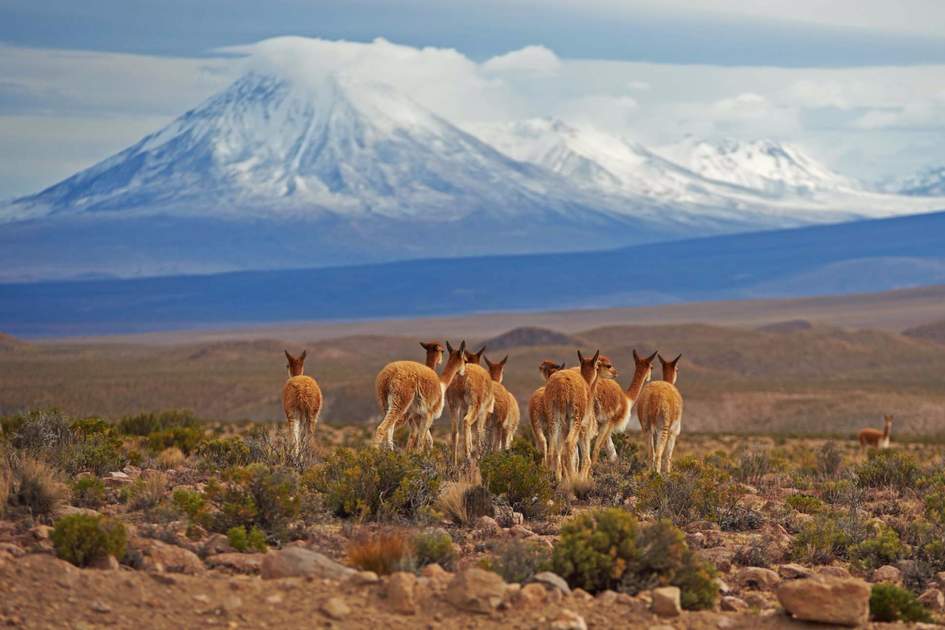 Group of vicuna (Vicugna vicugna) in Lauca National Park. In the background is the snow capped cone of the Tacora volcano (5980 m)
PrevNext

With most of the population concentrated around Santiago and Concepción, the rest of Chile has some beautiful wilderness areas to explore

Chile’s long, narrow geography means that its national parks are very varied. Not many people want to trek in the hot, dry desert north – the main attractions of parks like Lauca and Volcán Isluga are the wildlife and the superb scenery. These parks are best tackled in a four-wheel-drive vehicle, preferably with a driver who knows the area well. Farther south, coastal parks like the popular Pan de Azúcar give protection to sea life and are popular for camping.

Many national parks such as Nahuelbuta, Alerce Andino, and Conguillío have been created to protect Chile’s native forest. Unfortunately, the popularity of Parque Nacional Conguillío, in the northern Lake District, has brought with it serious erosion.

The park’s crowning glories are the spectacular torres (towers) and cuernos (horns), stark granite peaks that form part of the Paine Massif. The range continues into Argentina’s Parque Nacional Los Glaciares, with the Fitzroy Range attracting climbers from all over the world.

Parque Nacional Torres del Paine is a haven for the ñandú (rhea) and the guanaco, which European settlers slaughtered to near-extinction to make room for sheep but has since recovered. Used to visitors, they aren’t unduly bothered by cars and it’s usually possible to get quite close to take pictures. You might also see flamingos, condors and, if you’re really lucky, a puma.

Most people visit in January and February but the best month is December. As well as greater solitude, it is the time when the wildflowers are in best bloom.

As you ascend 4,500 meters (14,800ft) into Parque Nacional Lauca, the mighty 19,700ft (6,000- meter) -high volcanoes Parinacota and Pomerape – sacred gods to the inhabitants of the high Andean plain – dominate the landscape. At the heart of this park, which lies on the border with Bolivia, is the Chungará Lake which teems with birdlife, including flamingos.

Overshadowed by Ojos del Salado, the world’s highest volcano, this national park is off the beaten track but includes several Andean lakes and part of the spectacular Salar de Maricunga salt flat. Created in 1994, Nevado Tres Cruces includes the Negro Francisco and Santa Rosa Lagoons, protected by the Ramsar Convention on Wetlands. On their brackish water, there are Andean gulls and three species of flamingo while, on the banks, vicuñas and guanacos graze.

Founded in 1926, this vast national park, at the eastern end of Lago Llanquihue, has some of the most beautiful countryside in the Lake District and is dominated by the Volcán Osorno. Lago Llanquihue is the granddaddy of all the Chilean lakes. It is South America’s fourth-largest, covering some 877 sq km (339 sq miles) and nearly 50km (30 miles) across from Puerto Octay to Puerto Varas on the south shore. The lake has an oceanic feel, with breakers that churn higher in winds or rough weather and mini-climates in its interior that keep boaters and fishermen alert; except for the narrow strip of land between Puerto Varas and Puerto Montt, the lake would be part of the ocean.

The enormous national park stretches all the way to the Argentine frontier and bears the name of Vicente Pérez Rosales, the promoter of foreign immigration to the region. It was Chile’s first, established in 1926.

This article was originally published on 18th September, 2016

How to take a ski trip in the Andes

A taste of Chile: the country's best food

What not to miss: Top attractions in Chile

12 adventure activities to try in Chile

I had a customized trip to South America. We started out in Rio de Janeiro, then flew to Iguazu Falls, Buenos Aires, boated to Colonia Uruguay and left from Montevideo. They arranged just the level of hand-holding that I requested. The only thing I can... Read more