If you want to get active in Brazil and learn a bit about the history of one of its most iconic beaches try this walking tour along Copacabana, visiting the military fort at each end, the forest reserve which offers stunning views and of course stopping for refreshments in the Copacabana Palace Hotel. 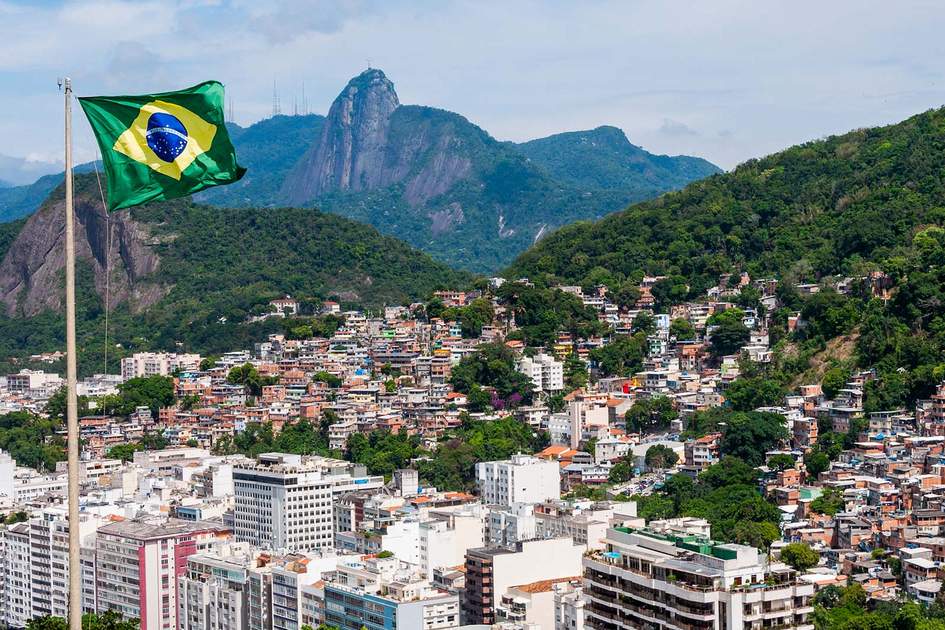 Points to note: Do not undertake this route on Monday’s as the forts will be closed. The 4km (2.5-mile) stretch along Copacabana offers no shade, so the walk is best done with a hat and suntan lotion, and at the start of the day (the forts open at 9.30am and close at 4.30pm). An alternative to walking the entire length of the beach is the catch a taxi in the part suggested.

Stroll along one of the world’s most famous beaches, starting off at a little-visited hilltop fort surrounded by a tropical forest. Stop for a drink at the iconic Copacabana Palace, Hotel, then continue to the end of the beach, where there are colourful fishing boats and a second fort, with cafes on the seawall and a mesmerising panoramic view.

Copacabana is perhaps one of the world’s most famous beaches. Without a doubt, it is one of Rio’s better-known landmarks, along with Ipanema, the Sugarloaf and Corcovado. For most of Rio’s history it was an undeveloped 4km (2.5-mile) stretch of sand, backed by dunes and vegetation. Then the 20th century came and Copacabana’s iconic hotel, the Copacabana Palace Hotel, was built. Soon after, the entire stretch was densely-packed apartment blocks. When most cariocas and tourists come here they head straight for the sand, the waves and the kiosks. Less visited are the two forts at each end of the beach: one up on a hill surrounded by forest, the other at the water’s edge with cafes along a seawall. You will see all sorts of sports being played on the beach and all sorts of beachwear on parade: it is certainly a good place to people watch. On the western side, you will even find a small section with colourful fishing boats and fresh fish for sale. For a first-time visit to Rio, Copacabana is a must, and it’s the sort of place which keeps drawing people back.

Taking a holiday to Brazil: how to get started

Insight Guides can help you with planning, organising and booking your trip to Myanmar. Simply, get in touch and share your budget, interests and travel style. Our local experts will create an itinerary exclusive to you and your requirements, which you can amend until it's just right. Alternatively, browse and modify ready-made holidays to create your dream trip today

The walk starts off at the far left side of Copacabana Beach as you look at the sea. To be precise, this part of the beach is known as Leme. Although it's all the same 4km (2.5-mile) stretch of sand, the road which divides Copacabana from Leme is Avenida Princesa Isabel: the main thoroughfare which goes through a tunnel to Botafogo.

You will notice a tall rounded granite hill at this end of the beach, with a fort on top. This is your starting point, so head along the promenade of the beach until you get to the end. Behind the beach is the Almirante Duque de Noronha Square, with benches and exercise machines. Just behind this is a ticket booth and the entrance to the Forte do Leme. Its official name is Forte Duque de Caxias, a name it received in 1934 in honour of an eminent 19th-century politician and army officer. The ‘Iron Duke’ fought many battles, including the 1823 Brazilian War of Independence and the 1835-45 Ragamuffin War, a secessionist movement in the southern state of Rio Grande do Sul.

The original defence system built in 1776, when there were rumours of an imminent Spanish invasion, was baptised Forte do Vigia (Lookout Fort). The invasion which did indeed happen in 1777, took place not in Rio, but in the south of the Portuguese colony of Brazil. The Spaniards invaded Ilha de Santa Catarina (present day Florianópolis) and recaptured Colónia do Sacramento, a Portuguese-held outpost on the river plate, which would later become part of Uruguay.

The forest of Forte do Leme

Just past the ticket booth, pass the barracks and buildings of the Centro de Estudos de Pessoal, a military training centre for 18-year-old conscripts. Just behind this, the path enters the forest and the temperature immediately drops.

The cobbled path gently climbs into the Mata Atlântica forest. There are plaques along the way describing this ecosystem and its native wildlife. In this forest, 89 of Rio’s 481 bird species have been recorded. Examples include the Sangue de Boi (a deep-red Brazilian tanager) and Saracura-do-mato (the ground dwelling slaty-breasted wood rail). To increase your chance of seeing birdlife, go slowly and quietly. What you will definitely see are saguis (also called micos, or marmosets), which are not at all shy. As the path climbs there are occasional glimpses of Copacabana Beach down below. Further on, you will see the mouth of Guanabara Bay and the Sugarloaf looming above it.

In 1987, a reforestation project was initiated, which led to the planting of 11,000 native tree seedlings. In 1990, the Área de Proteção Ambiental do Morro de Leme, was founded. This conservation area also included Cotunduba Island, near the mouth of the bay, and Morro do Urubu, a hillside beside the Morro da Babilônia favela. Photos taken at three-year intervals show light green grassy slopes quickly turning into deep green ones. The same process was undertaken in a separate project for Morro da Babilônia itself bringing the total reforested area to 124 acres (50 hectares).

After 20 minutes, you will reach the top of the hill and the Fort, with panoramic views of Copacabana Beach. Through a colourful gateway marking the entrance to Duque de Caxias Fort proper, you will enter a defensive system with solid ramparts and massive howitzers. Walking around the walls, views if the Sugarloaf and the Atlantic Ocean are impressive. A small museum by the entrance describes the Fort’s history and its role in countless military episodes during this young country’s existence. Take time to take in the views and the silence before you head back down. 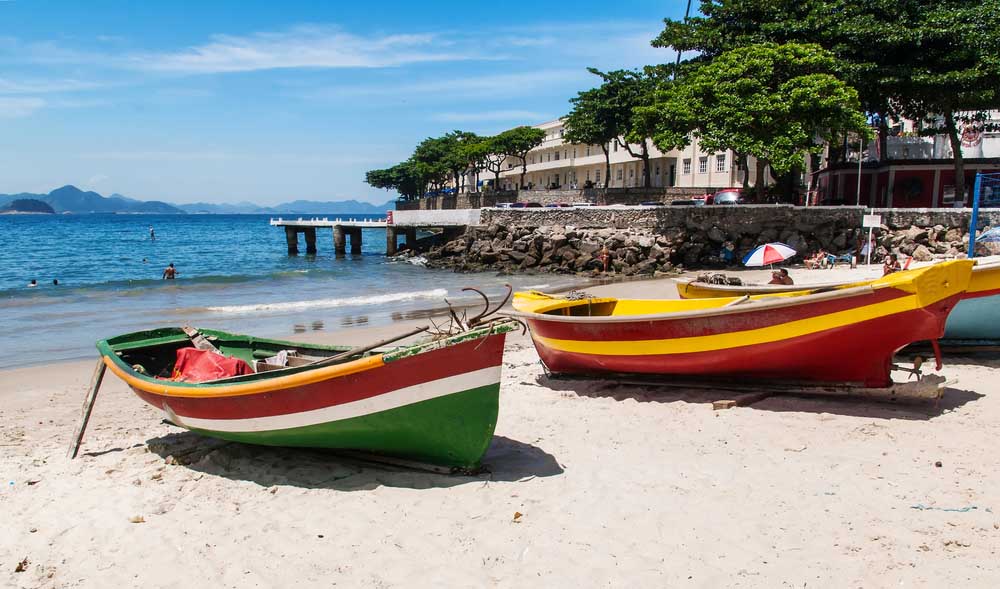 When you reach the entrance of the fort, back down at beach level, you will see kiosks along the base of the rock face. Beyond this is a narrow pathway cut into the rock, above the sea. This is the Caminho dos Pescadores (Fishermen’s Trail), where local anglers congregate to cast their lines into the rough sea below. From the trail there is a panoramic view of Copacabana Beach and you may also see surfers catching waves just below you. Looking towards land, note the Morro da Babilônia favela rising steeply behind parking blocks. If you are interested in seeing a favela this is one of the safest, and access to it is up the Ladeira Ary Barroso road, which starts a couple of blocks back from the beach. If you have time, head up there now, alternatively come back for another visit.

Walking along the promenade, past beachside kiosks selling coconut water and fast food, note the iconic wavy pattern at your feet. Created in contrasting black and white, out of small pieces of marble imported from Portugal, and then hammered one by one into place, the idea was very Portuguese. Go to Lisbon and you will see the same sort of paving, it is called Calçada portuguesa. The wavy pattern itself developed over time, from when it first appeared in 1906 to the final 1970 design by Burle Max, a renowned artist and landscape gardener. It runs the entire length of the beach so you have plenty of time to photograph Brazil’s most famous walkway.

After approximately 1km (0.6 miles), you will see the eight-story Copacabana Palace Hotel on your right. Built in 1923 in an elegant Art Deco style, painted white and taking up almost an entire block, Rio’s most famous hotel regally looks out to sea. Apart from luxury suites, the hotel has four bars and restaurants open to the public, including Cipriani, for Italian cuisine, the Mee for Asian dishes, a piano bar and the poolside Pérgula restaurant, a casual, but sophisticated, spot for a drink or light meal. Within the hotel, and adjoining it along the street, there are high-end souvenir and jewellery shops.

The next stop is 3km (2 miles) further along the beach, at the western end, so this might be a good chance to catch a taxi from the Copacabana Palace Hotel or nearby. As you head along the beach, notice all the sporting action – joggers, people on their bikes, surfers, volleyball and soccer players. Perhaps most impressive of all is futevôlei (footvolley), a version of volleyball where hands cannot be used. Instead it’s all feet and shoulders, requiring ultra-fit players who usually play in pairs. Like many sports, footvolley developed over time but Octavio Moraes (1923–2009), who played for Botafogo, one of Rio’s soccer teams, is generally regarded as the person who invented it. That was back in the 1960s and the place in which it was invented was Copacabana Beach itself.

Continue until you reach the end of Copacabana Beach, where you will see colourful fishing boats and the small Copacabana fish market. The best time to find fresh fish is in the mornings. On calm days, the sea in this part of Copacabana is like a lagoon; it’s a popular spot for stand-up paddle boarding, boards can be rented from a series of places along the beach.

On the walkway, notice the statue of Dorival Caymmi (1914-2008) standing with a guitar in hand. He was a renowned Brazilian musician and one of the early contributors to the bossa nova movement, which took place in the 1950s in Rio. 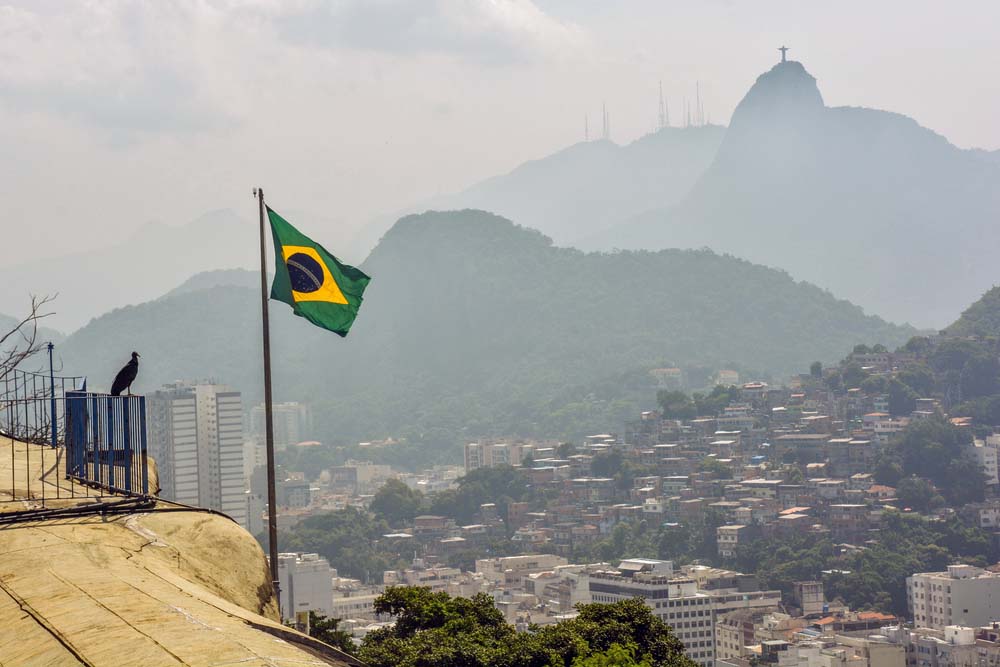 A lookout view of Rio from the top of the a fort in Copacabana. Photo: Shutterstock

To reach the entrance to Copacabana Fort continue walking just past the fishing boats and, as the main road curves to the right, turn left through the gates with military personnel standing guard, into the fort. The low rocky headland, site of the present-day fort, was originally home to a church, built by a Bolivian trader who survived a shipwreck in these treacherous waters. Inside the church was placed a replica of Our Lady of Copacabana, the patron saint of Bolivia. Eventually, Copacabana lent its name to this part of Rio (which back then was undeveloped). The fort itself was only started in 1908, taking six years to complete.

The pathway heads along the waterfront, past cannons, with a view of Copacabana Beach and Sugarloaf Mountain behind Forte do Leme. Along the entire beach front there are tall apartment blocks and in one section these are backed by the Morro do Cantagalo favela on the steep hillside. As you continue, you will pass a couple of cafes with outdoor tables overlooking this panorama. Confeitaria Colombo is a branch of the iconic establishment in Rio’s Centro, and just beyond it is café 18 do Forte. There’s also a museum recounting Brazil’s history from a military perspective, recreating scenes from specific battles and wars. At the end of the walkway, you reach the massive dome-shaped fort. Visitors can walk onto the rooftop and through tunnels where you will see cannons and prison-like rooms. The fort was used through the years, spanning both world wars and the post-World War II military dictatorship, which came to an end in 1985.