From churrasco to farinha: Brazilian food to try 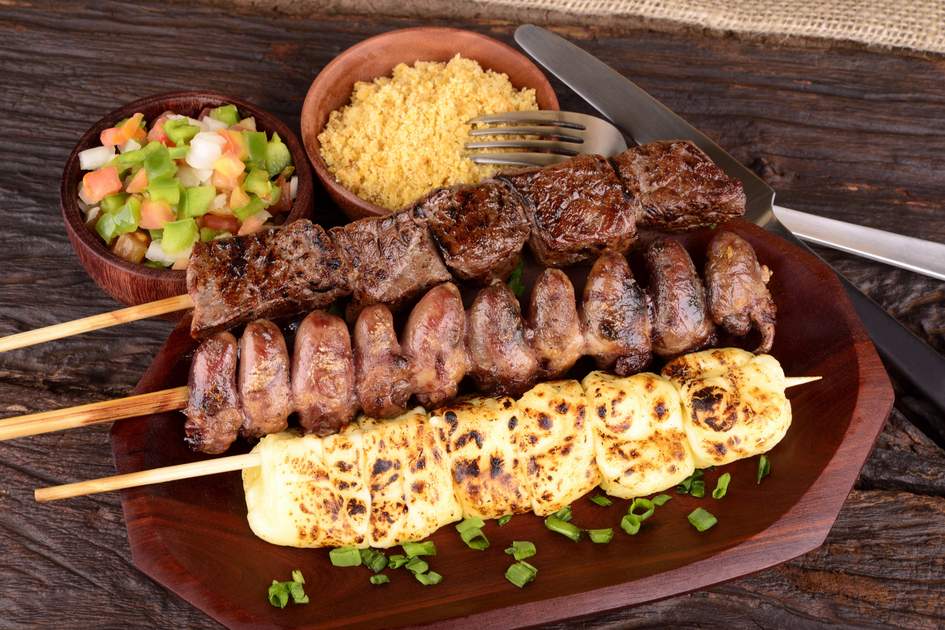 Seafood and river fish are fresh from the water, the beef melts in the mouth, and tropical fruits are delicious. Ice-cold beer and the national drink, caipirinha, are good accompaniments, and, of course, there’s an awful lot of coffee.

From giant Amazonian river fish to succulent and beefy steaks, and with an abundance of tropical fruits and vegetables, Brazilian food offers something for all kinds of tastes. The most traditional dishes are variations on Portuguese or African foods, but there is a wonderful variety of dishes, reflecting both on Brazil’s size and the influence of its many immigrant groups. Tempting seafood, fresh sushi, barbecued meat, hearty Italian dishes, and delicious salads are all widely available. However, the staple diet for many Brazilians regardless of cultural group still consists of rice, beans, and farinha – dried, ground manioc.

A favorite throughout the country is the churrasco, or barbecue, which originated when the southern gauchos roasted meat over open fires while working the herds. Many churrascarias offer a rodizio option: for a set price, you can eat all you wish from a variety of tender meats selected straight from the spit.

In many restaurants a portion is large enough for two people, and it is perfectly acceptable (except in the smartest places) to ask for a dish to share. Comida a kilo restaurants (literally meaning food by weight) are great places where you can get a wide choice of cheap, usually good-quality dishes. Here you can sample unfamiliar foods, and you are not limited by a poor knowledge of Portuguese. 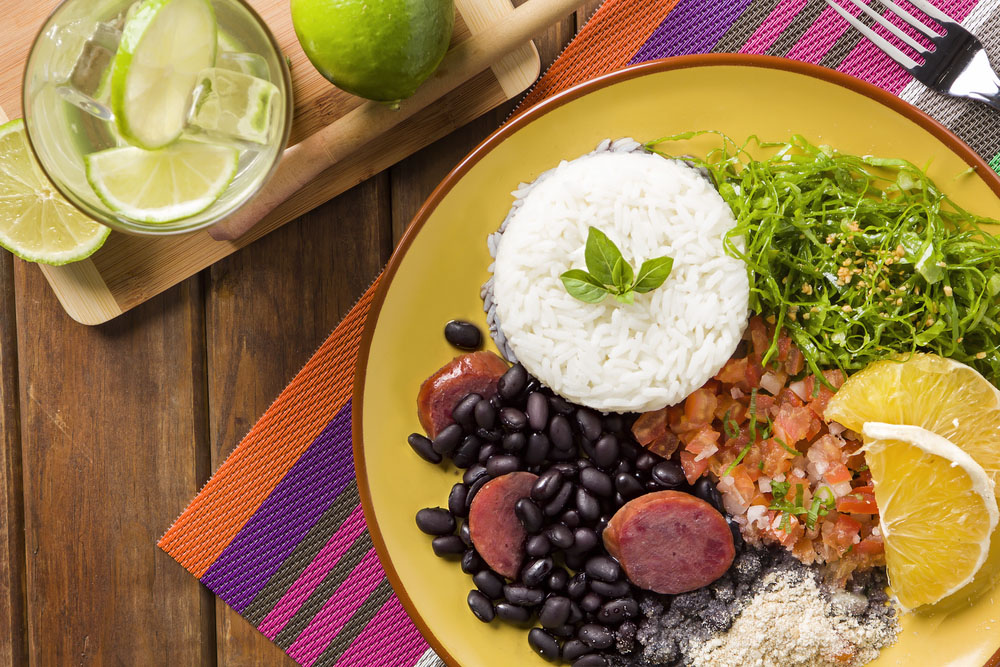 Regional specialties in the northeast and along the coast include seafood dishes such as peixe a Brasileiro, a fish stew served with pirão (manioc root meal cooked with broth from the stew). In the inland areas, dishes include carne seca or carne de sol (dried salted beef, often served with squash) and roast kid. Minas Gerais has a hearty pork-and-bean cuisine – the tasty pork sausage is called linguiça – and queijo minas cheese is good.

In the Amazon, exotic dishes include those prepared with tucupi (manioc leaves, which numb the tongue). The rivers produce a great range of fish, including piranha and the giant pirarucu. In some parts of the south, the cuisine reflects a German influence, and Italian and Japanese immigrants have brought their culinary skills to São Paulo.

Salgadinhos are Brazilian savory snacks, often served as appetizers or as a quick snack as small pastries stuffed with cheese, chicken, palm heart, and so on. Other tasty snacks include pão de queijo (a cheesy bread) and pastel (two layers of a thinly rolled, deep-fried dough with a filling sealed inside). Instead of french fries, try aipim frito (deep-fried manioc root).

Most desserts are very sweet, and are made from fruit, coconut, egg yolk, or milk. Portuguese-style egg yolk desserts are delicious, especially quindim (a rich egg yolk and coconut custard). The custard makes another appearance in olhos de sogra (mother-in-law’s eyes), in which it is used to stuff prunes. Docinhos – little sweets – consumed at all times of the day, are just miniature versions of desserts.

Watermelon, papaya, and pineapple, are among the vast array of fruits on offer. The pink, pellet-like acerola is used mainly for juice, and is said to contain the highest concentration of Vitamin C of any fruit in the world. Sticky guava paste, goiabada, contrasts with sharp white cheese in a favorite Brazilian dessert, known as Romeu e Julieta. 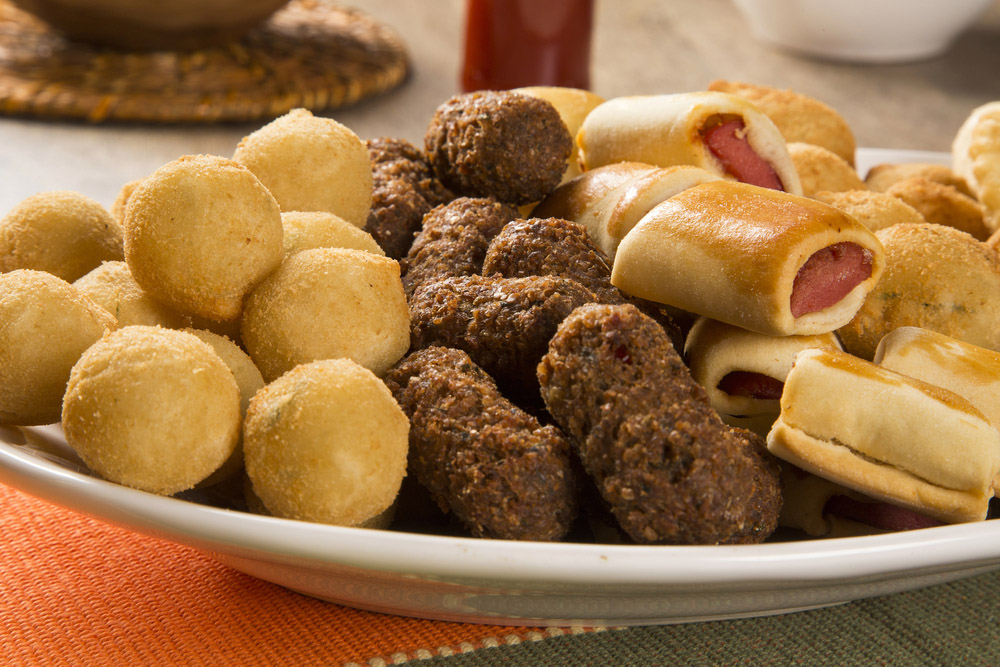 The spiciest Brazilian food is found in Bahia, where an African influence can be tasted in the dendé palm oil and coconut milk. One of the great Brazilian dishes, feijoada, originated in Bahia. It consists of black beans simmered with a variety of dried, salted, and smoked meats (and often the tail, ears, and feet of a pig). It was developed as food for slaves, whose masters ate all the better cuts of meat, but is now considered Brazil’s national dish (although it is not found everywhere). The meats are served in separate bowls, and it is accompanied by white rice, finely shredded kale (couve), farofa (toasted manioc root meal), and sliced oranges. Oranges may seem a strange accompaniment, but they provide a perfect tangy foil for the richness of the dish.

A Portuguese import that is popular in Brazil is bacalhau (dried, salted cod). On sale in shops and markets it looks like sheets of stiff, gray cardboard, but when soaked and cooked it is transformed. It is most often served in rissole-like balls – bolinhos de bacalhau – which are meltingly rich. Another Portuguese dish is cozido, consisting of stewed meats and vegetables (usually several root vegetables, squash, cabbage, and/or kale) served with broth. 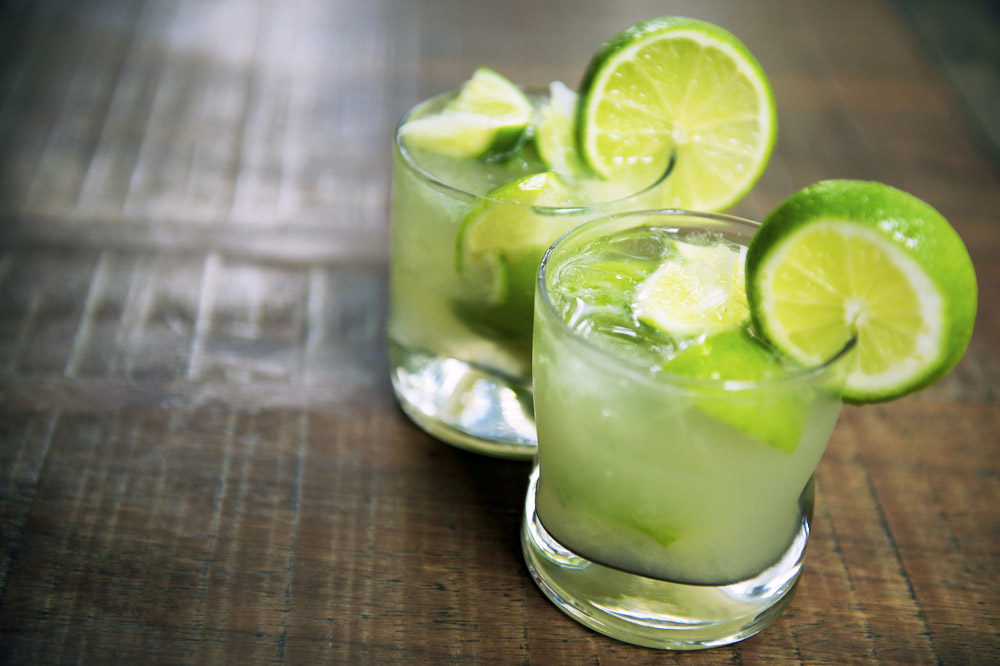 Brazil and coffee (café) are synonymous with each other. Money earned from coffee sales boosted the country’s economy in the early 20th century, and it is still one of the most successful exports. Brazilian coffee is roasted dark, ground fine, prepared strong, and drunk with plenty of sugar. Coffee with hot milk (café com leite) is the traditional breakfast beverage. Once breakfast is over, it is served black in tiny demitasses. These cafezinhos (little coffees), offered to visitors to any home or office, are served piping hot at all botequins. There are even botequins that serve only cafezinho. However you like it, Brazilian coffee makes the perfect ending to a good meal. Decaffeinated coffee is now available in supermarkets, but as Brazilians do not favor the concept, finding it in restaurants is still difficult.

A fruit that is rarely seen but widely consumed is guaraná. The reddish, seed-filled fruit is borne, in the Amazonian wild, on woody vines that seek the sun in the rainforest by climbing up other trees. The seeds are highly prized and have been used by indigenous people for ages. Guaraná was rediscovered in the 20th century; it can be found in capsules, powder or paste form. Its chemical composition is akin to that of ginseng, high in caffeine and other (reputedly aphrodisiac) substances. Visitors and residents are most likely to encounter the product in its canned form, in the refreshing, sparkling soft drink Guaraná, whose sales rival those of the cola producers.

Rio’s juice bars are great places in which to familiarize yourself with the local fruits. There’s a vast choice – açai, acerola, graviola, as well as fruits that will be more familiar. Or you can opt for a vitamina, a thick, creamy shake that will include banana with one or two other types of fruit, and sometimes oat flakes or wheat germ, and is very similar to what is now marketed abroad as a “smoothie.” If you are watching your calories, you should ask for sem açúcar (without sugar).